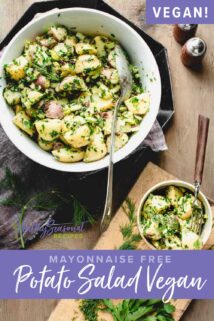 No mayo was used in the making of this Vegan Potato Salad with Herbs. Just a simple oil and vinegar dressing and a ton of herbs turn this make-ahead summer side dish into a recipe greater than the sum of its parts. 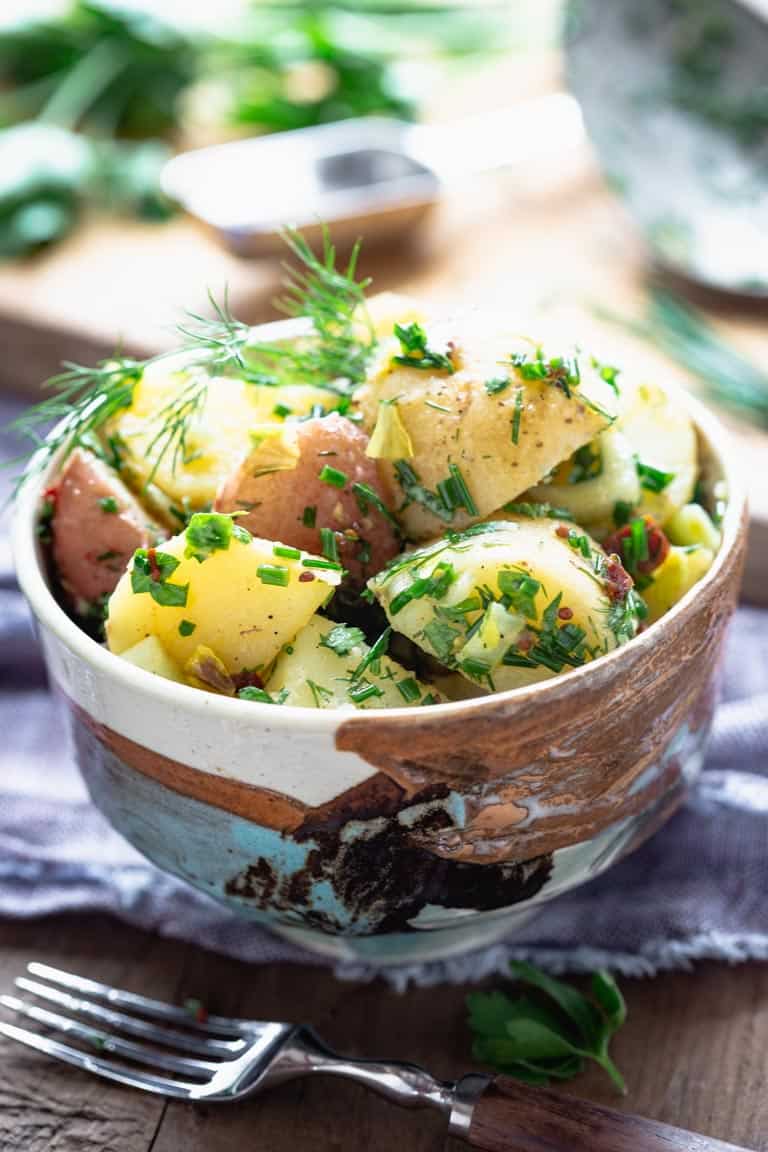 Who doesn’t love behind the scenes footage? I’ve got some for you today.

But it’s maybe not what you think. It’s of something else entirely than those pics of photo set-ups or messy kitchens. No, it’s about a working draft, and how Google crushed my dreams of becoming the next thug kitchen. Today’s BTS is about the working draft of this Vegan Potato Salad Recipe with Herbs. 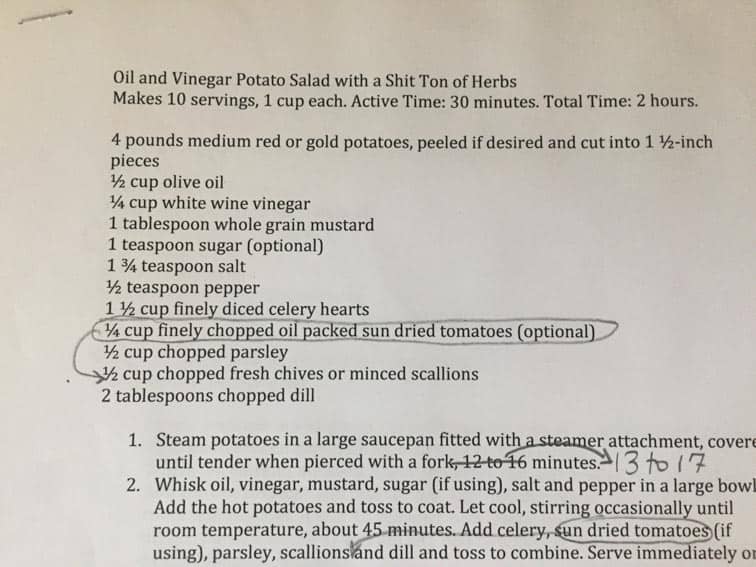 Yep, up until a week or so ago, this was recipe had been called: Oil and Vinegar Potato Salad with A Shit Ton of Herbs.

I put it on my editorial calendar months ago, because that name summed up the concept I had in my head. It said exactly what the recipe was—potato salad with no-mayo, just a simple oil and vinegar dressing, and a shit ton of herbs. So why change it? I maybe have had a mini day dream about actually calling this recipe that, but I knew I’d have to change it when it came time to share it with other humans.

Finally, when I got the recipe just right (the sun-dried tomatoes and a pinch of sugar where the clinchers, BTW) it was time to send the draft off to my cross tester. That’s when I knew another set of eyeballs were going to be looking at the recipe. It was time to give it a “real” name. So I changed it to Oil and Vinegar Potato Salad with Herbs.

Except I forgot to change the file name.

Since not a single thing goes unnoticed by my dear cross tester (love her!!) she noticed the name, and noted her appreciation of it in her report. Ha!

So I almost actually changed it back. But then there’s this annoying thing called Google. And SEO. That’s Search Engine Optimization, for the rock dwellers. It’s something all food bloggers obsess over. Basically, besides Pinterest, it’s how people find our recipes, so we play by Google’s rules. In other words, Google rules the earth!

And uh, apparently, it turns out that people don’t actually search for “a shit ton of herbs.”

Turns out that people don’t even search for “oil and vinegar potato salad” that much, and much bigger fish have got that search term covered. Damn.

So I decided to call it Vegan Potato Salad with Herbs. I am so boring, but in my defense I am a slave to Google and I just wanted you to find this recipe. Because it is yummy as shit. Yo. 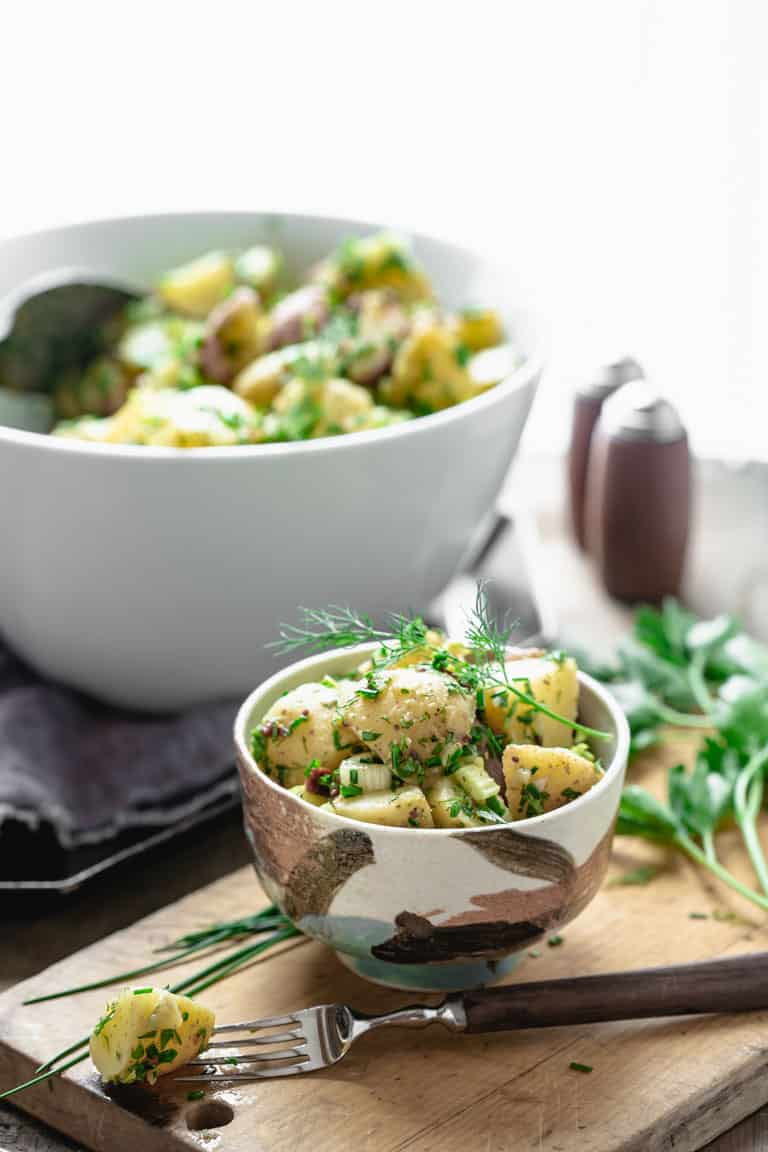 What Kind of Potatoes to Use For Potato Salad 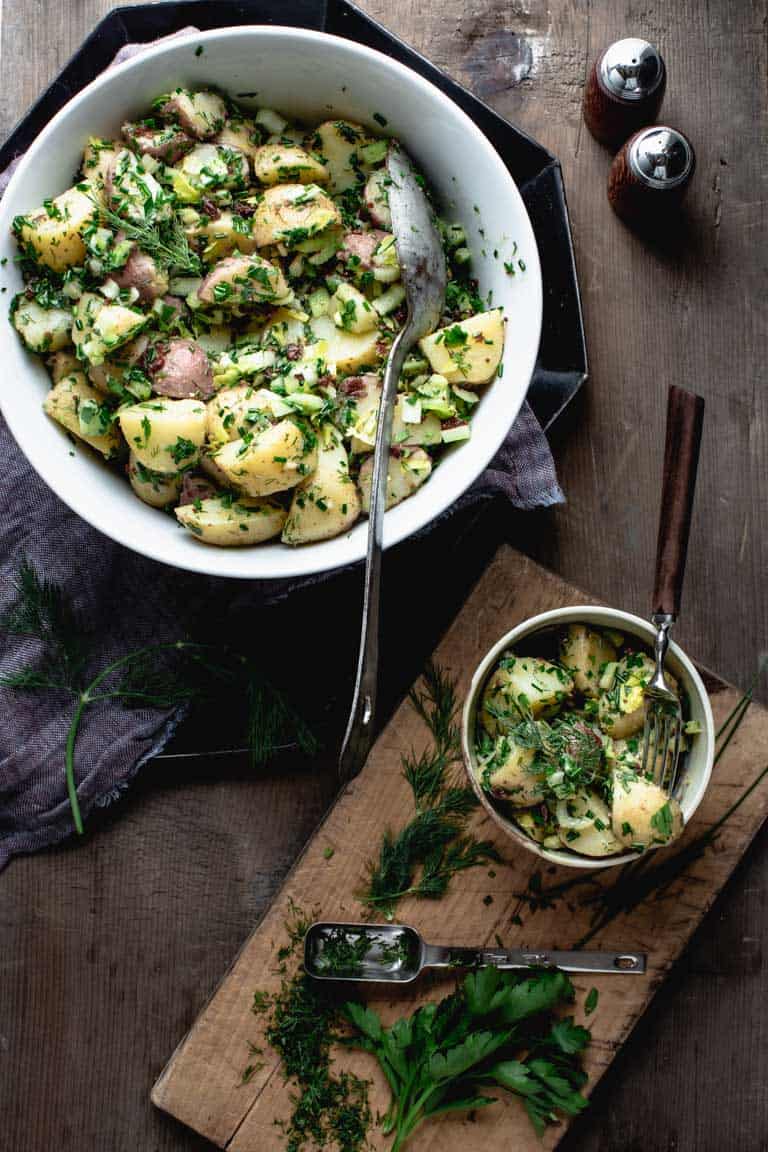 How To Make Potato Salad Without Mayo

I have nothing against mayo in a potato salad. Especially when it is cut with Greek Yogurt to make it lower in calories and saturated fat, like in this red white and blue potato salad. But I realize there are lots of people who can’t stand mayo, or who avoid it because they are following a plant based diet. I also happen to love an oil and vinegar based potato salad because I love the bright acidity of the dressing, especially when paired with barbecue fare. Here are some tips to making potato salad without the usual mayo: 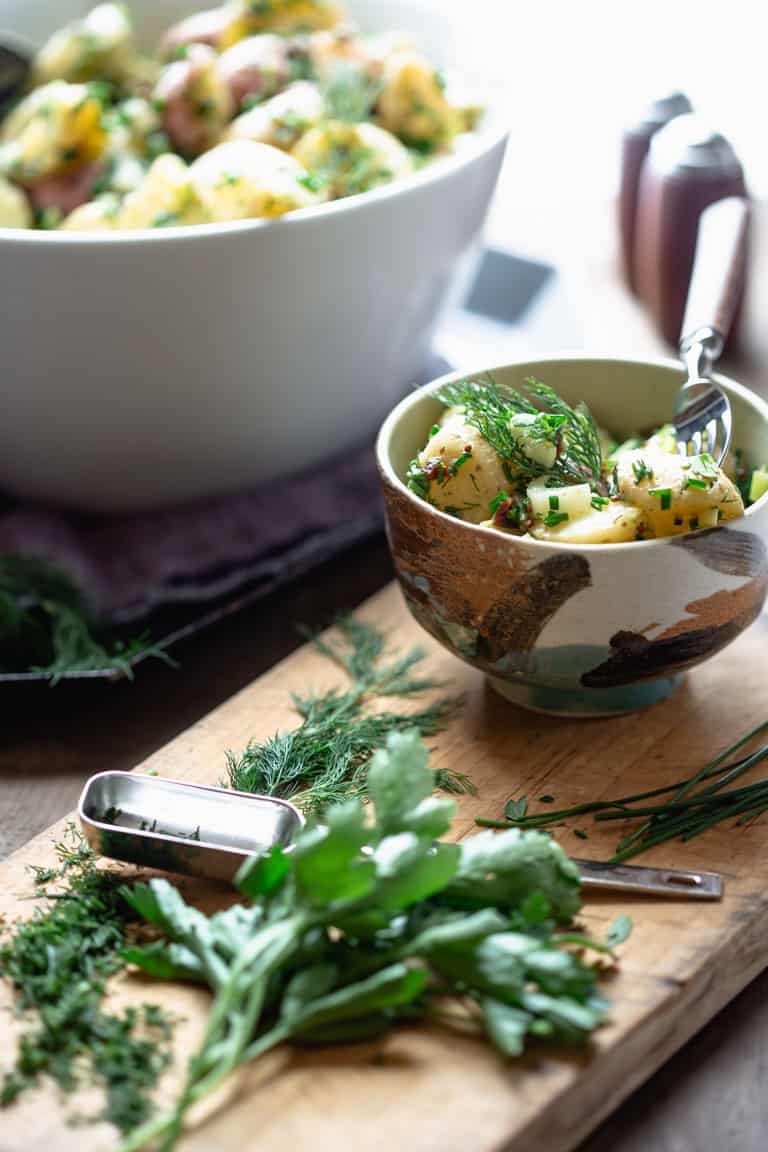 Leave the Skin On:

I leave the skin on the potatoes because it increases the fiber and nutrients in each serving, making this a little healthier.

As with my Italian Pasta Salad Recipe (also vegan) I mixed the hot potatoes with the dressing and let that cool before adding in the rest of the ingredients. This allows the starch to absorb the dressing and makes the potatoes more flavorful.

love using whole grain mustard (that’s an affiliate link) in this recipe because it adds flavor, while not overpowering the overall herb forward flavor profile.

Add a Pinch of Sugar:

The flavor of this combo can come off as slightly bitter, so I found a tiny bit of sugar really helped to balance that out. It doesn’t taste sweet at all, but makes the bitter taste fall away. 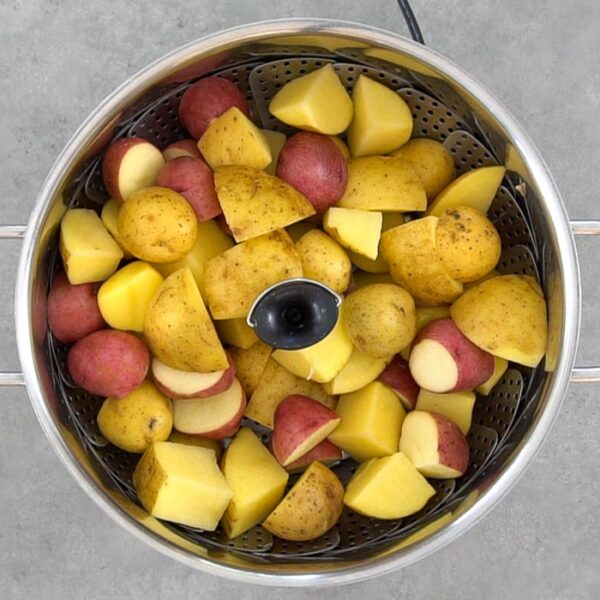 1. Steam potatoes in a large saucepan fitted with a steamer attachment, covered, until tender when pierced with a fork, 13 to 17 minutes. 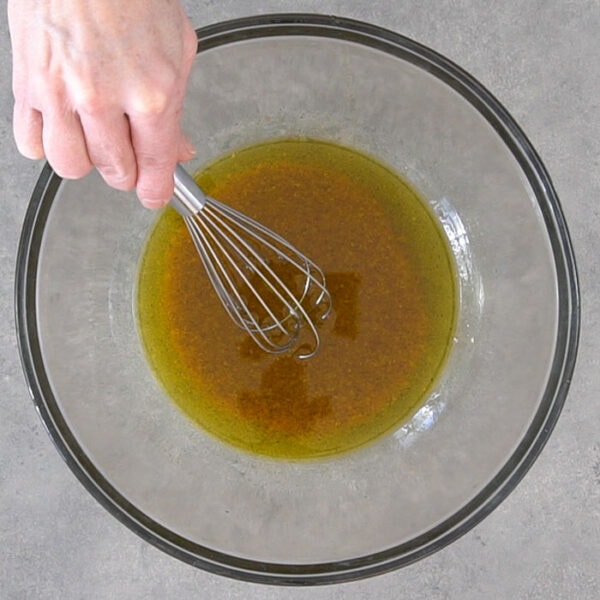 2. Whisk the dressing ingredients in a large bowl. 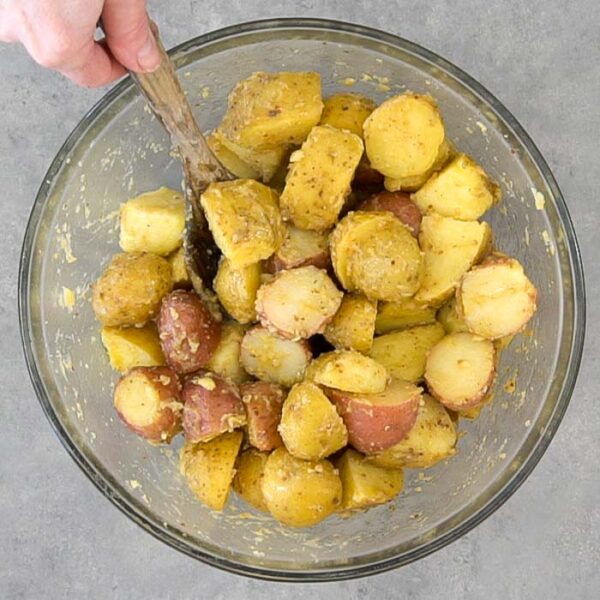 3. Add the hot potatoes to the dressing and toss to coat. Let cool, stirring occasionally. 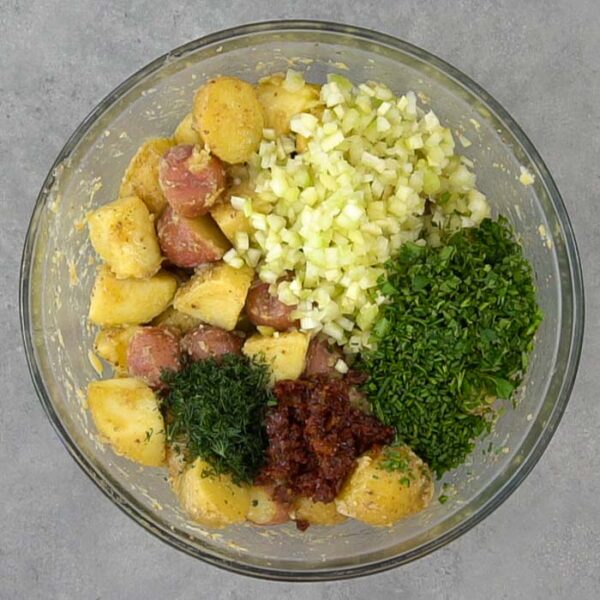 To Make this Vegan Potato Salad Ahead of Time:

Thanks for reading. If you make this recipe, please come back and let me know by leaving a star rating and review!

No mayo was used to make this vegan potato salad with herbs. Just a simple oil and vinegar dressing and herbs turn this summer side dish into a treat.

To make this potato salad in advance, simply prepare through step 2, cover and refrigerate up to one day ahead. Continue with step three as directed.

Look for potatoes that are smooth skinned, firm to the touch and do not have any sprouting “eyes.” For potato salad use waxy potatoes like red, yellow, white or purple instead of russet (baking) potatoes for the best finished texture. 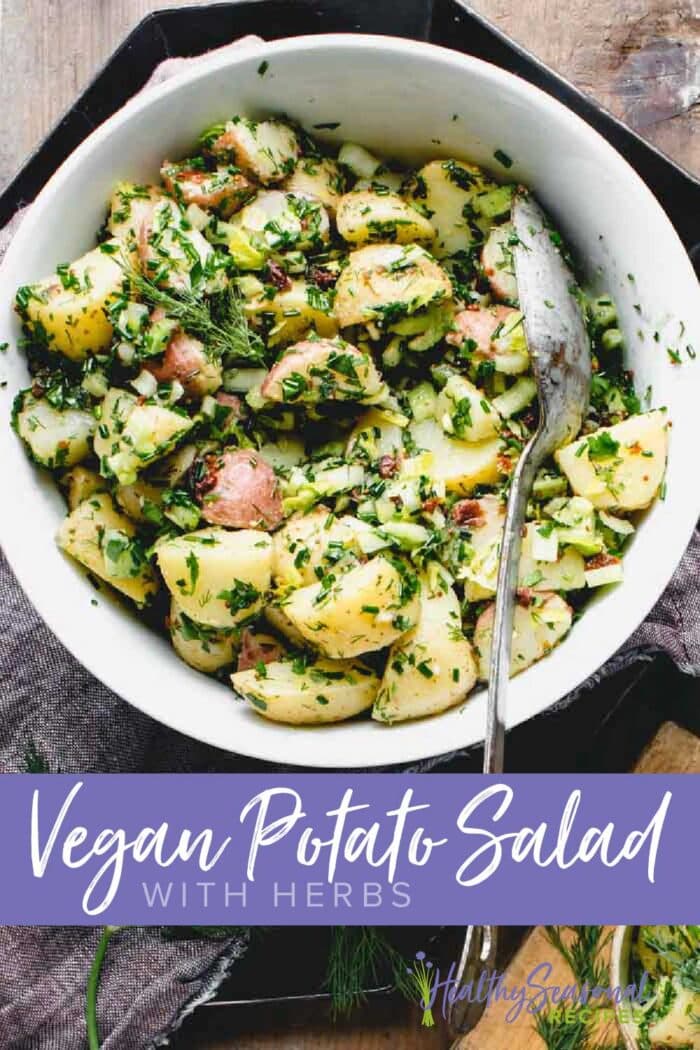 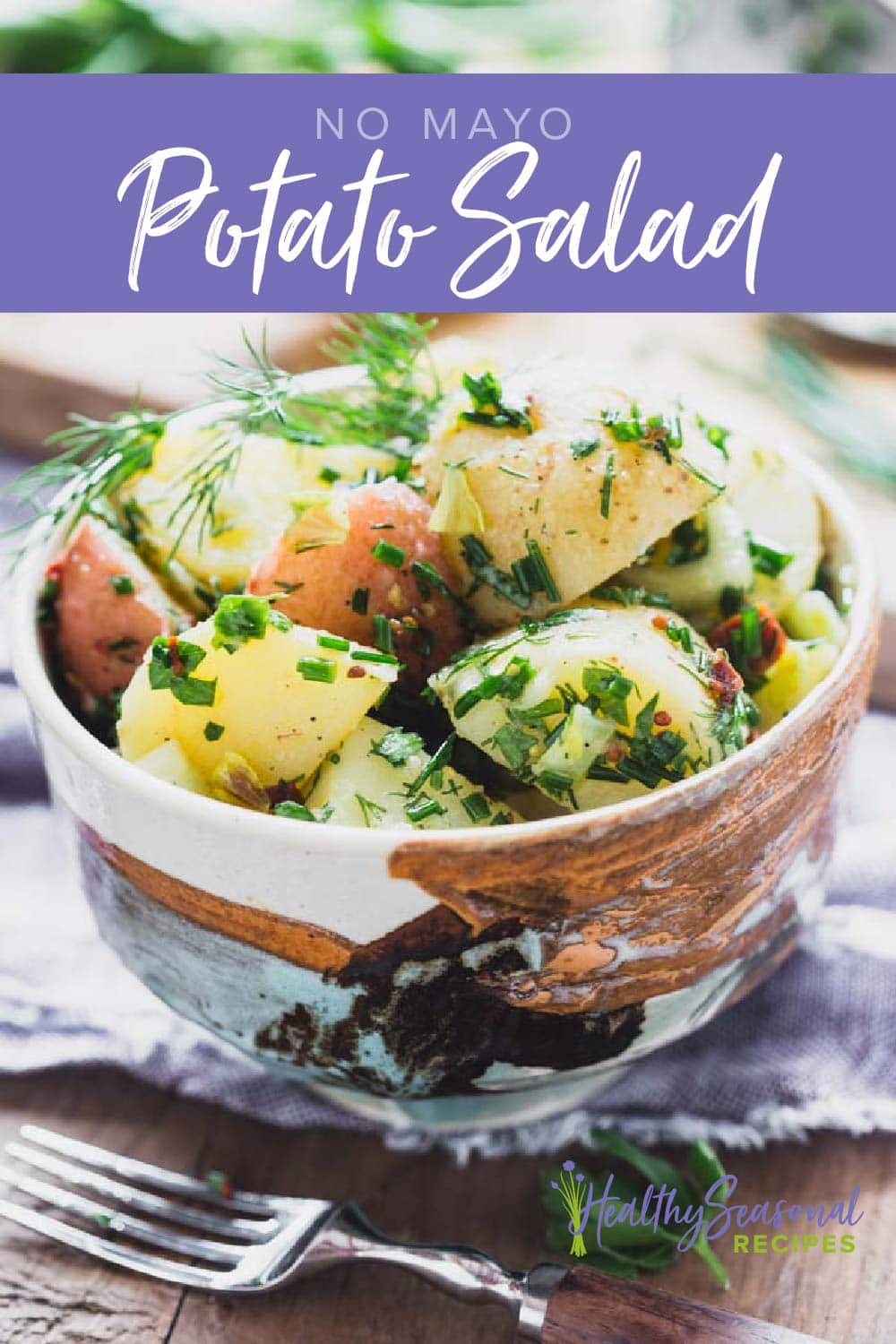 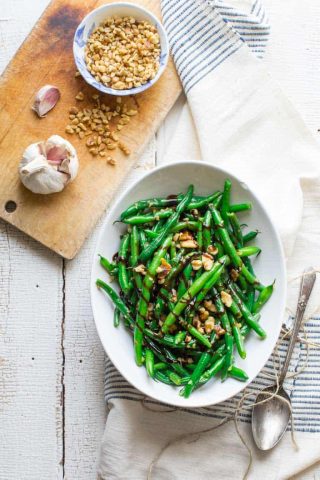 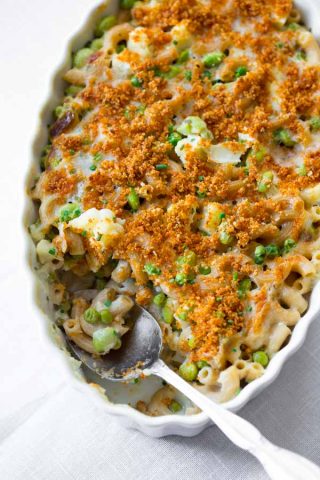 cauliflower macaroni and cheese with vegetables 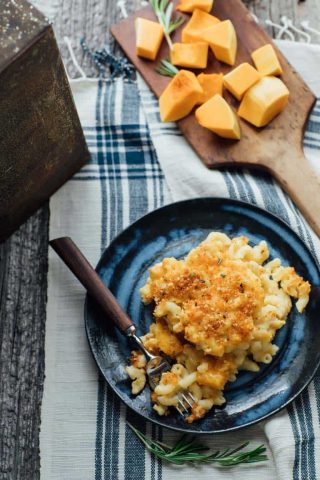 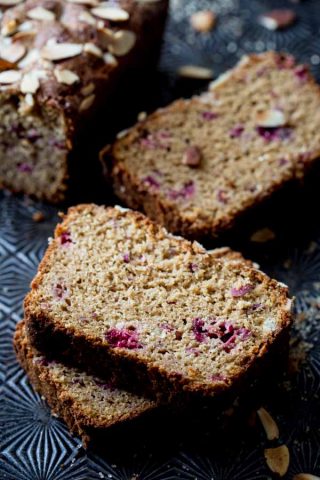