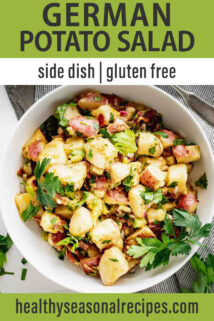 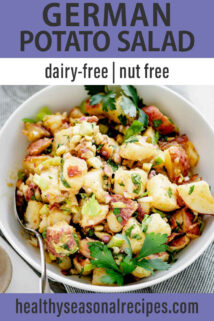 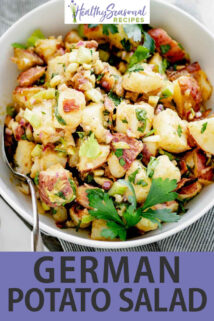 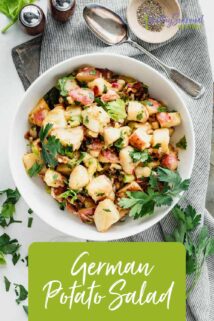 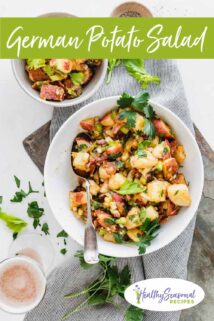 This German Potato Salad recipe is so easy ( I used a few tricks to make the process so much faster) and it’s also healthier with zero refined sugar and less saturated fat. But it is 100 high in delicious smoky, sweet and sour flavor!

It also seemed like a no-brainer to share this particular German Potato Salad recipe today because it is from my cookbook, Maple: 100 Sweet and Savory Recipes Featuring Pure Maple Syrup {Quirk Books, 2015.}

Back in March when I shared my Perfect Oatmeal Pancakes, which is another recipe from Maple, I mentioned that my book had gone out of print, and that meant I had gotten the rights back to the recipes to Maple. I’ve decided not to go through the process to re-publish it with another publishing house. Instead I am going to share my favorite recipes from Maple with you here on my blog.

In fact, I’m just remembering as I write this, that ironically when we got back from our recent trip to Germany, and I shared my German Mustard Salad Dressing recipe with you, I thought to myself how I wished I had the rights to this very German Potato Salad from my book. And now I do. So it’s gotta happen, you see? #NeverEnoughPotatoSalad!

What is German Potato Salad

As I said, I grew up eating this style of potato salad. (Way more so than more traditional red potato salad with mayo or creamy potato salad. ) I asked my mom how she came upon making a mayo free version. She had grown up eating her mother’s oil and vinegar potato salad. She said she latched onto the idea probably from a recipe she had found in Gourmet Magazine at some point. I remember that she made the dressing in the skillet after the bacon came out of the skillet. She used the drippings from the pan, added in the vinegar and sugar and cooked it. Then she’d pour the dressing over the warm sliced potatoes, add in chopped red onion and celery and chopped parsley as well.

I looked up German Potato salad in the Joy Of Cooking and it sounds pretty similar to the kind she made (minus the dill pickle.)

In our recent trip to Germany, we had warm potato salads that were more like this Swabian potato salad that were made with broth and onion. Some had no bacon at all. In the above photograph, you can see a bit of the potato salad tucked in next to the veal sausage on the left on one of the sausage sampler plates we tried.

Either way, the recipe I am sharing today is neither traditional German or truly traditional American German! Instead I have taken the flavors of the Americanized version I grew up eating and then made it healthy (by drastically reducing the bacon fat and refined sugar) and actually easier (there’s no cooking of the dressing, and no need to peel the potatoes.) Why? Because that’s the way I roll here on Healthy Seasonal Recipes! I’m always trying to make delicious approcable food healthier and easier!

Look for small red or yellow skinned potatoes. I leave the skin on for more fiber.

Olive oil is high in monounsaturated fats which are heart healthy.

The sweet fruitiness of the apple cider vinegar pairs really nicely with the smoky bacon and maple syrup.

Traditionally German Potato Salads have sugar added to the dressing and it is melted into the dressing as it cooks. This dressing is much easier and doesn’t need to be cooked because the sugar is already liquid. The flavor of “Dark Robust” maple syrup is best in this recipe if you can find it.

German mustard is a lot like what we call brown deli mustard here in the States. If you have Dijon (which is stronger) use 1 1/2 teaspoons.

The salt helps to balance the sweet and sour flavors. I tend to go heavy on the pepper, but just add to taste.

Okay- while paprika is used in German Potato salad, smoked is another story. I know this is not traditional, but this is where the “healthy” part of this recipe comes in. The smoked paprika is added to amp up the smoky bacon flavor without adding all those calories and saturated fat of actual bacon. I also love the slight reddish tint it adds to the salad.

Ye, I did use bacon. Don’t worry! And I like to use really good quality thick cut bacon for this recipe. I only use 5 strips, so going for the best quality bacon makes the difference.

I buy celery hearts for this recipe and I go to the center of the bunch to get the stalks with leaves still attached. This was a necessary component of my mom’s German Potato salad. The bitterness of the leaves adds the balancing taste that helps to make the whole recipe more harmonious.

The key here is to chop the red onion as finely as you can. Since the onion isn’t cooked a little goes a long way. Just a quarter cup is all you need to make the salad have an overall onion flavor.

As you probably know by now I am somewhat of a parsley fanatic! I add it to everything from Quinoa Salad to Moroccan Carrots. So it is not only traditional but necessary to add to this recipe, in my mind.

How To Make This Easy German Potato Salad Recipe

As with my Vegan Potato Salad with Herbs I use small potatoes and cut them prior to steaming them. I like to leave the skins on my potatoes. I think it is a) pretty and b) it’s healthier.

Many recipes for potato salad (my mom’s and Grandma’s included) have you peel the hot potatoes and then slice them. I am too impatient for that! And I find cutting then steaming to work just as well.

Why Steaming Is Best For Potato Salad

Instead of covering them in cold water and bringing the potatoes to a boil, which takes a bit of time, I cut a corner and steam them. That way you only have to wait for a small amount of water (under the steamer basket) to come up to a simmer. This shaves 10 minutes off your total time!

How to Cook The Bacon in the Microwave

Since we’re not worried about preserving bacon grease for the dressing, you can save time (and bacon grease spraying all over your stove) and cook the bacon in the microwave. To do so:

If you don’t have a microwave, then you can absolutely do this on the stovetop or even the oven if that’s your thing.

To make this dressing, no cooking is required! See, what I mean about this recipe being easy???!!! All you have to do is whisk the oil, vinegar, maple syrup, mustard, salt, pepper and paprika in a large bowl.

Add The Hot Potatoes To The Dressing

After the potatoes have had a chance to soak up the dressing, add in the crispy crumbled bacon, chopped celery hearts and leaves, minced onion and chopped parsley.

Give everything a good stir and you can serve it immediately. Or let it cool to room temperature.

Steps To Make This Healthy Version Of German Potato Salad

More Summer Side Dish Salads To Try This Season

Thank you so much for reading. If you make this recipe, please come back and let me know by leaving a star rating and review. It helps so much!

This easy Warm German Potato Salad is made with celery, parsley and bacon and it’s sweetened with maple syrup instead of sugar. It is lower in saturated fat and doesn’t have any refined sugar so it is healthy too!