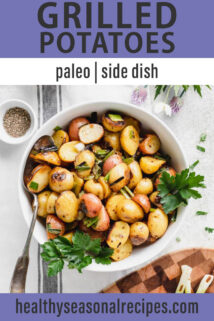 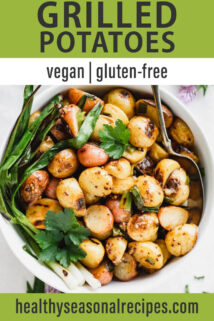 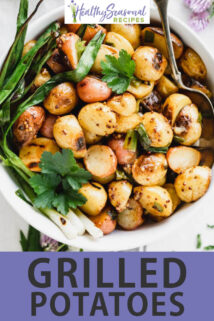 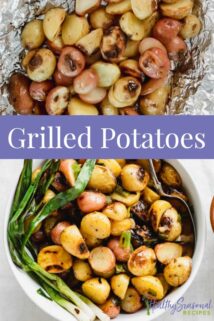 If you’ve never tried to make grilled potatoes, then I am so excited to share this recipe! I’ll show you how just how easy it is to make a foil packet so you can cook them right on the grill. I went a step further today (for a big flavor boost) and tossed them with a mustard and maple dressing to make an easy side dish for summer. 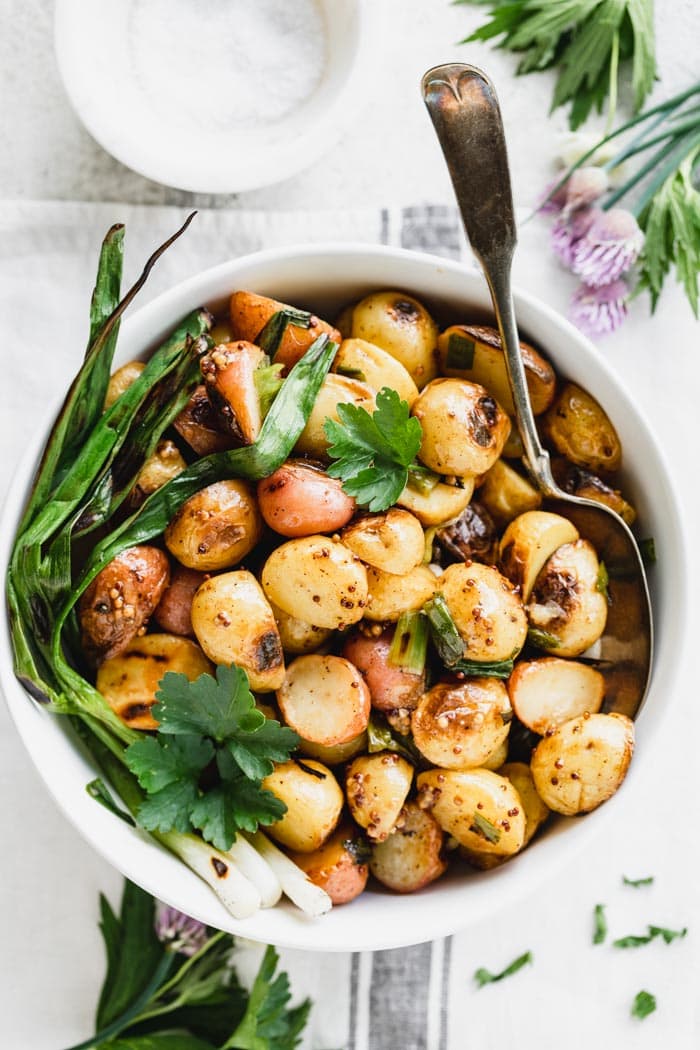 I originally shared this recipe on May 16th, 2014. This post contains affiliate links.

I actually didn’t ever know about grilling potatoes until 7 or 8 years ago. My mother in law served them to me at their cottage up in Quebec. They had us up for the weekend, and she made a delicious dinner almost entirely on the grill. She showed me how easy it was to make a foil packet and to just have a little patience (it took much longer to cook them through than I thought.)

I was so excited to have another way to enjoy potatoes in the summer besides potato salad. I mean I love using my oven to make roasted potatoes and oven fries in the winter, but in the summer turning on the oven is such a drag! Who wants to heat up the house even more? Not me!

In the following months I experimented with grilling potatoes in foil at home and I learned some tricks to get tender results, and lots of flavor! 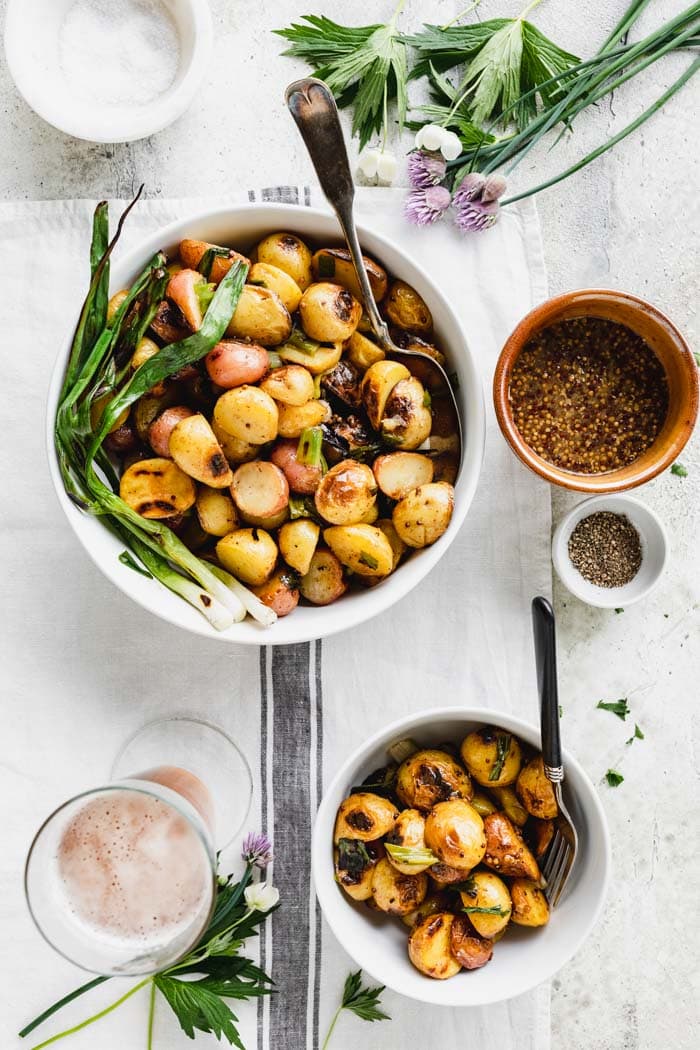 There are two main kinds of potatoes: Waxy and Floury.

Waxy potatoes are those with thin skin and silky smooth flesh. Common types of waxy potatoes are red, white, purple or gold skinned. These potatoes are best for moist heat cooking such as steaming and boiling (for mashed potatoes.)

Floury potatoes are those with thick rough skin and fluffy insides. The most popular floury potato is the Russet. These potatoes are best for dry heat cooking method such as baking.

Which Potatoes To Use For Grilled Potatoes

The best kind of potatoes for grilling are waxy potatoes since these grilled potatoes are cooked in a foil packet, where they steam. So technically this is a moist cooking envirnment.

I used small yellow and red skinned potatoes that I cut in half. They were only about 1 1/2 to 2 inches in diameter and I cut them in half. If you have larger potatoes, simply cut them into 1-inch to 1 1/2-inch pieces. 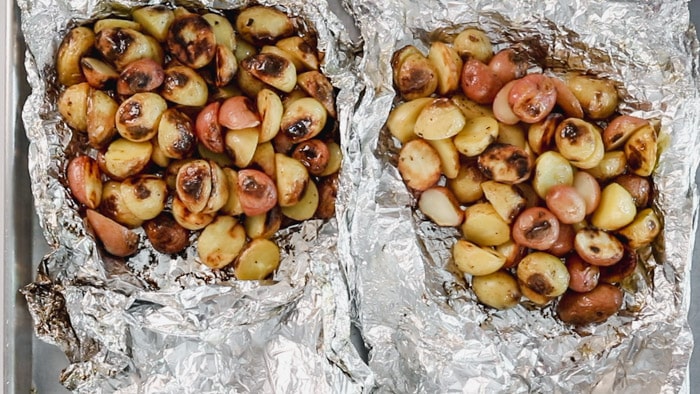 Tips For Grilled Potatoes in Foil

Instead of trying to cook potatoes directly over the flame, nestling them into foil packets helps them to steam and soften as they brown on the outside. They won’t be dry and they come out perfectly every time. Here’s my top tips for getting great results.

Use two layers of Foil

To Prevent The Potatoes From Sticking To The Foil

One of the tips my Mother in Law shared with me that first time I had grilled potatoes was that they tend to stick to the foil. To prevent that from happening I coat the top layer of the foil with cooking spray before I add the potatoes.

Potatoes tend to brown quickly on the grill, so it is important that they have enough time to soften through before they get too dark. Grilling over a medium hot fire will keep them from darkening too much.

I have a three burner Weber Gas Genesis Grill. I like to preheat my grill to high but as soon as I add the packets, I turn it down to “medium.” I always grill with the lid closed unless otherwise noted.

If you use a charcoal grill use 3/4 of a charcoal chimney and check the heat with the lid thermometer for 350 to 400 degrees F. I love the natural wood charcoal, but it burns too hot and fast for this recipe so I recommend briquettes or at least a blend here. If your grill doesn’t have a lid thermometer, use this charcoal grilling guide to make sure your grill is at medium heat.

You can also control the heat of a charcoal grill by dampening the vents. Less air will make the temperature drop.

Add Flavor at the End To Prevent Burning

As I said, flavorings like herbs and garlic will burn if you add them to the packets.

Remember, it takes more than 30 minutes to cook the potatoes through, so in that time the garlic and herbs would be blackened and bitter. Instead, add the flavor in at the end. 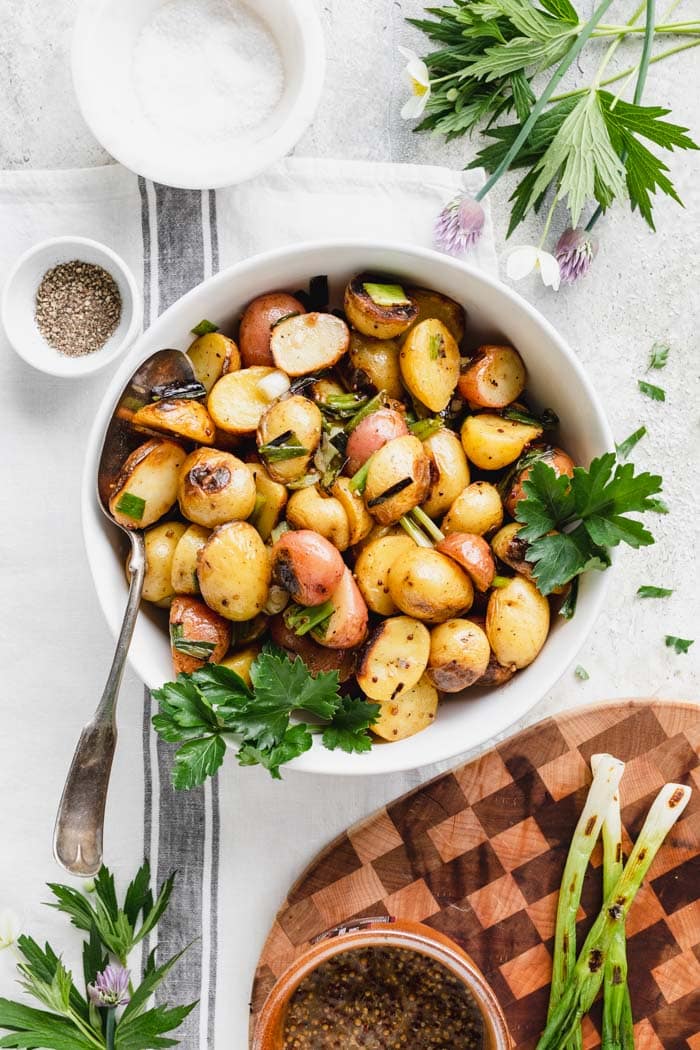 How To Make Grilled Potatoes

Once you turn your grill on (or set up the charcoal chimney) you can build your foil packets.

How To Grill Potato in Foil

How Long To Grill Potatoes

Now my friends, is where we take that blank canvas of delicious roasty toasty grilled potatoes and we add in a super duper lot of flavor!

Today I used grilled scallions, or as they’re known in Latin grilling culture they’re called cebollitas asadas. I love to make them at this time of year. (I am growing five rows of scallions in my garden so I can make them!)

I also make this in the springtime with local Ramps which are wild leeks. They grow all along the creek and river banks here and they’re one of the first green things we get to enjoy in the spring. Follow the same instructions using ten trimmed and cleaned ramps instead.

To give this grilled potato recipe even more awesome flavor and to add a Vermont twist, I added in Maple syrup. We have our own small batch maple syrup business, and I even wrote a cookbook about maple syrup, so I happen to be partial to it.

Whisk the dressing ingredients in a bowl. Add a bit of oil for richness and salt and pepper for seasoning. Then add the hot potatoes and chopped grilled scallions directly to the bowl and toss everything to combine it. 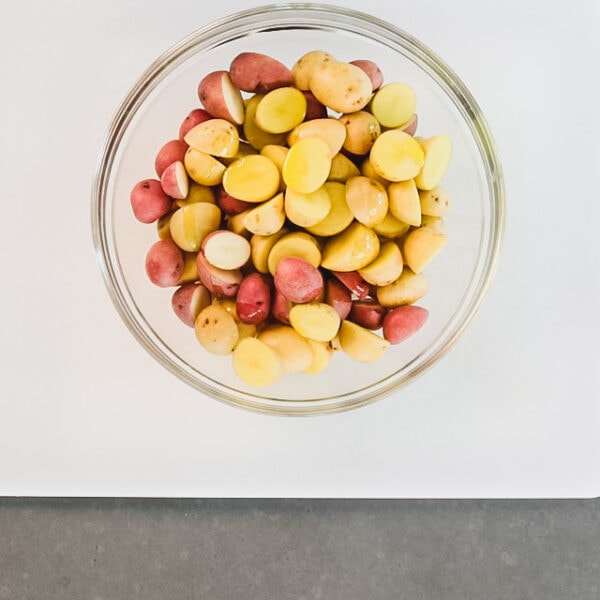 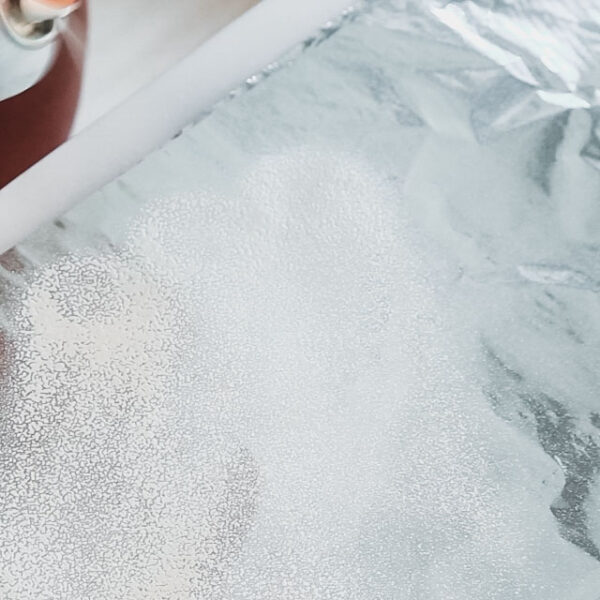 2. Lay two 2-foot-long sheets of foil on top of each other on the work surface. Coat the foil with cooking spray. 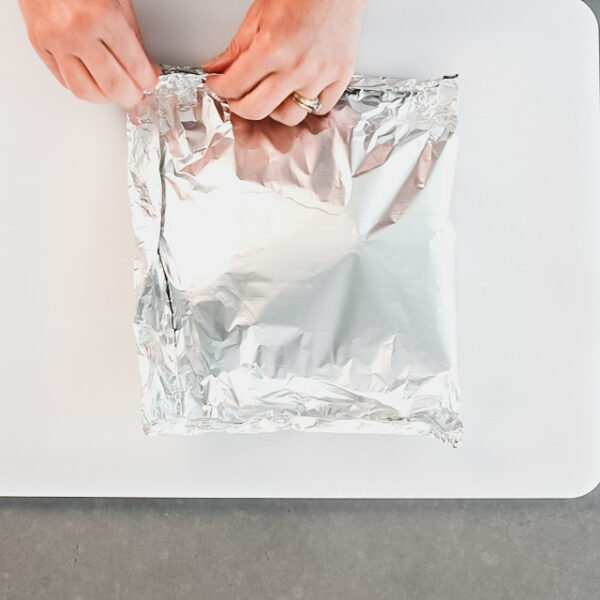 3. Add half of the potatoes to one side of the packet. Fold over and seal the edges. The packet will be 10 inches long by about 8-inches wide. 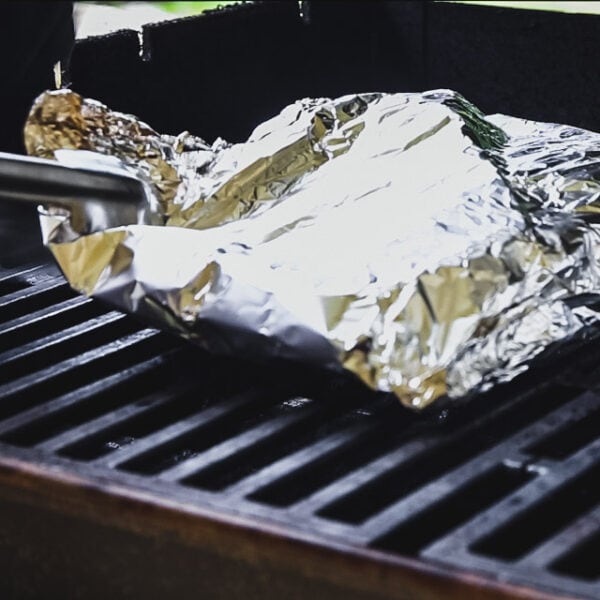 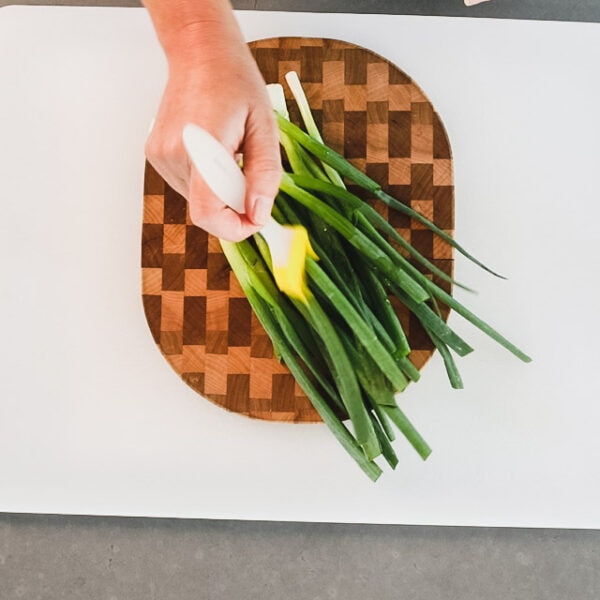 5. Brush oil over the scallions. 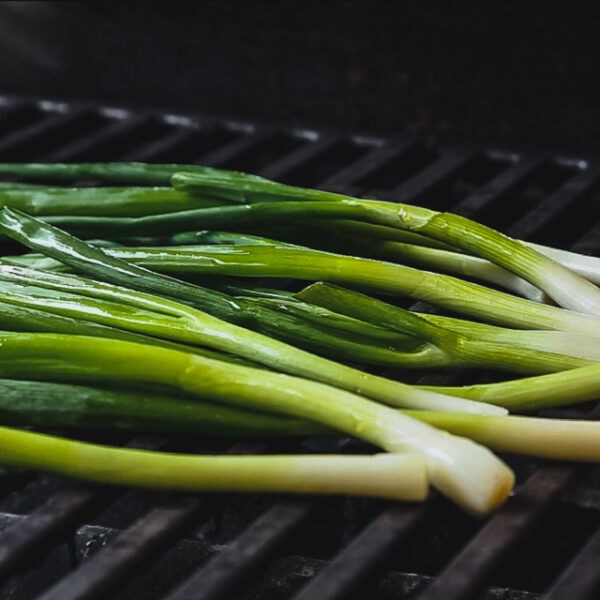 6. Grill the scallions until just tender and starting to char, about 2 or 3 minutes. 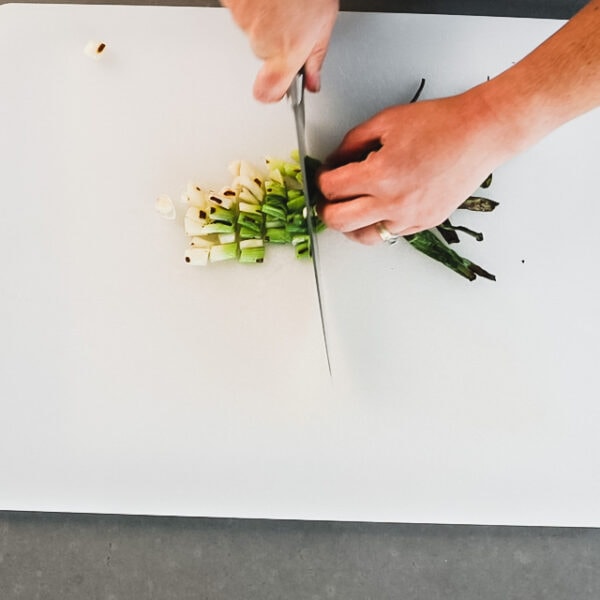 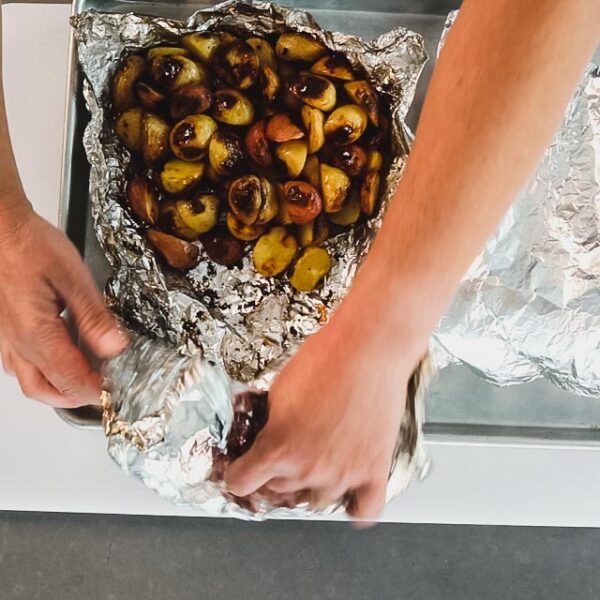 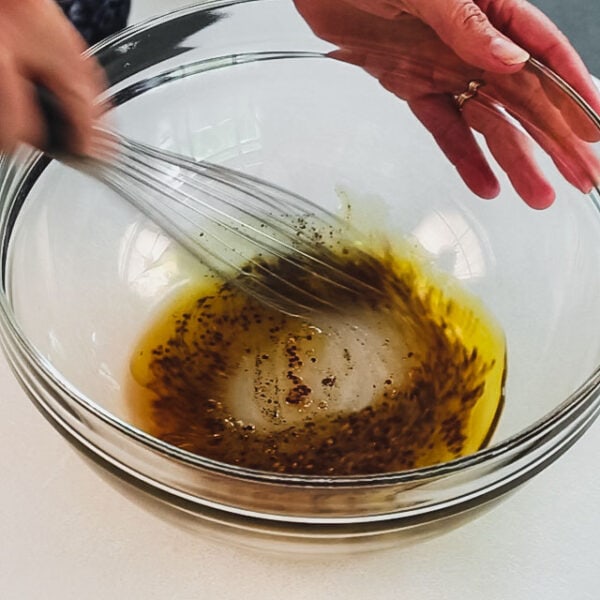 9. Whisk the maple, vinegar, mustard, oil, salt and pepper in a large bowl. 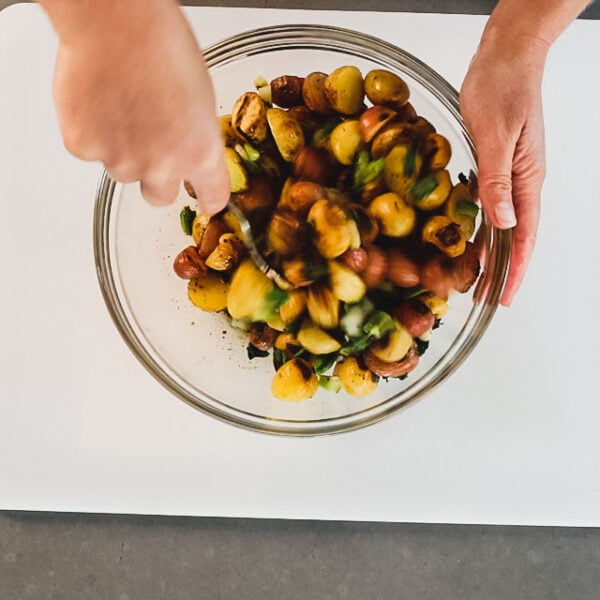 10. Add the potatoes and scallions to the bowl and toss to coat.

How To Make This Recipe In Advance

This recipe is best when served hot or warm or even room temperature.

I am not a fan of it served cold. The texture of the potatoes is too hard when the potatoes are cooked and then refrigerated.

So if you want to make it in advance you’ll need to reheat it.

What To Serve With These Grilled Potatoes

These potatoes are super versitile so you can really get creative when planning out your menu.

Thanks so much for reading! If you make this recipe, please come back here to the blog and comment and leave a star rating below! I would love to hear from you!

This easy grilled potatoes recipe incorporates grilled scallions and a maple mustard dressing for a big flavor boost! Serve them as a healthy summer side dish. 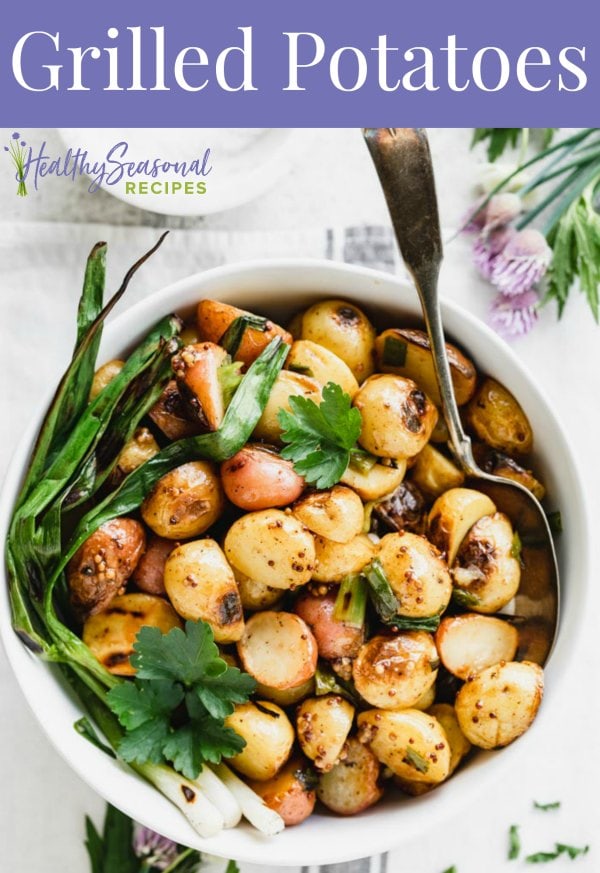