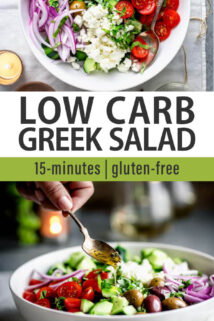 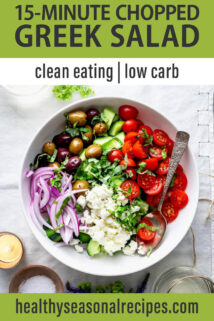 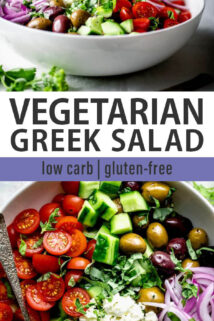 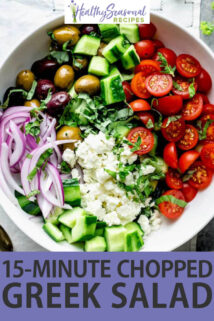 What’s not to adore about this easy-as-can-be 15 minute Greek cucumber salad with feta, olives and cherry tomatoes? It’s the absolute best! 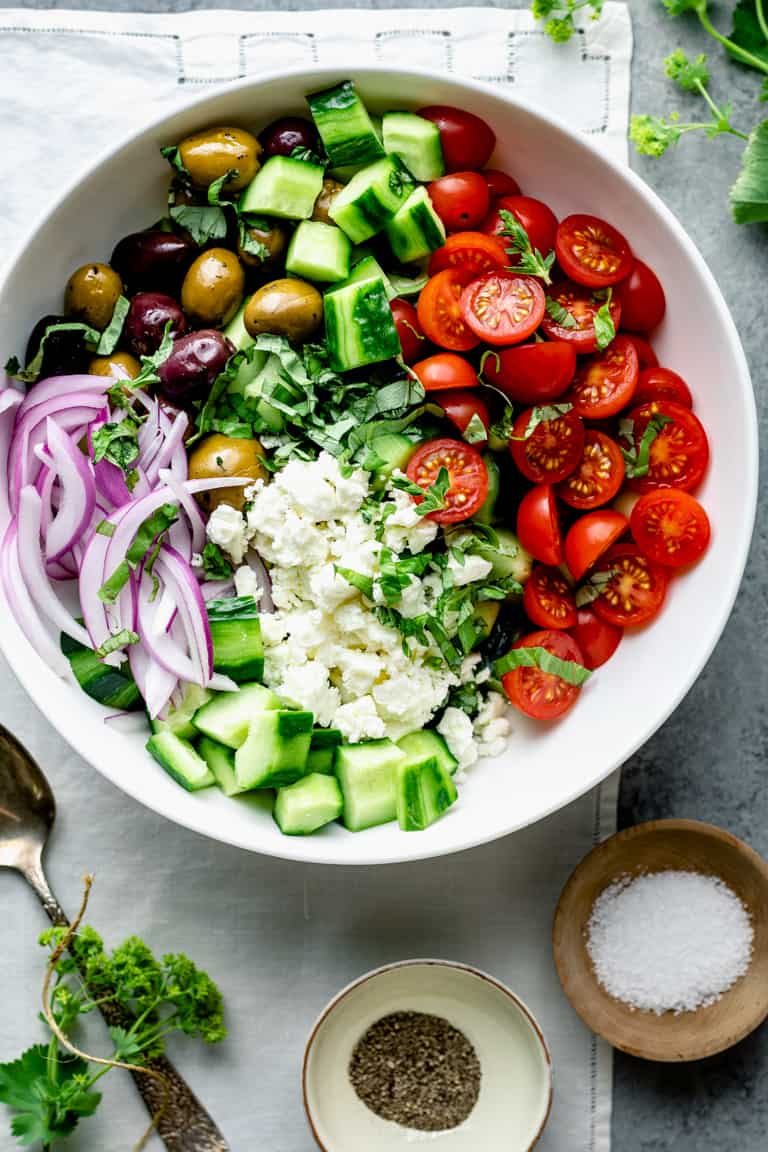 I originally shared this Greek Cucumber Salad on May 30th, 2014. I’ve updated the images, some of the text and added a video to share with you today. This post may contain affiliate links.

Wanna know how much I love this salad? I’ll tell you.

You know that expression, “not my cup of tea”? It’s basically a gentle euphemism for I don’t like something. Well, I think there should be such a thing as a cup of tea scale. Like 1 would be dislike greatly. 5 would be indifferent. And 10 would be love a whole bunch. For me coming in at #1 would be backcountry skiing during a sleet storm. And #10 would be this Greek Cucumber Salad.

That’s how much I love this recipe. 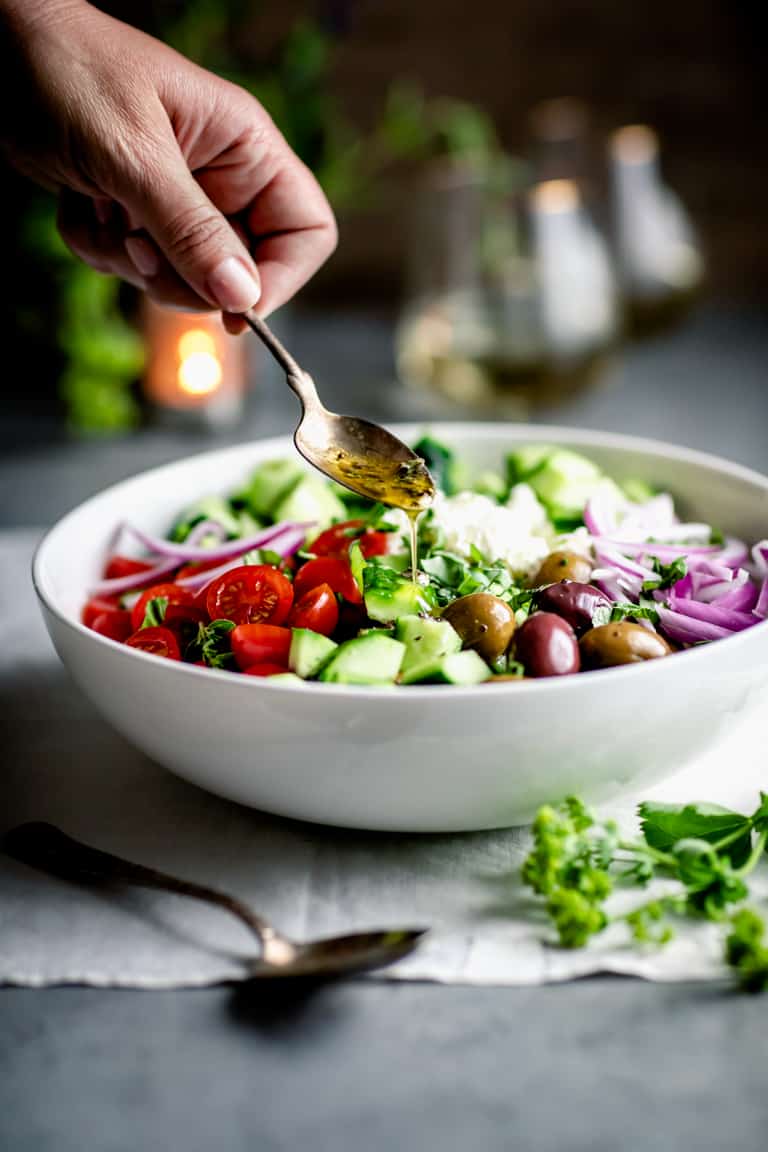 Before we get into the details of how to make this 15 minute recipe, let’s clear up a common question about Greek salad:

Does Greek Salad Have Lettuce In It?

Yes and no. In the United States many recipes and restaurant Greek salads include lettuce. But traditional Greek salads do not have lettuce in them. Instead they allow the cucumbers and tomatoes stand in for the bulk of the salad. The ingredients are chopped and tossed together.

This Greek salad today is the no-lettuce variety that’s all about the chopped cucumbers and tomatoes.

How to Make Greek Salad Dressing

I like to make the dressing for this Greek Cucumber Salad right in the bowl. That saves a dish, and makes it a quicker recipe to prepare. Because tomatoes and cucumbers naturally let off their juice as they sit, you do not need a ton of dressing to make this salad moist enough. Really it’s just about adding flavor!

Remember that the salad also contains feta which along with the raw onion, is the prevailing flavor, so the dressing is more of a background flavor.

To make the dressing just whisk red wine vinegar, really good olive oil and fresh oregano in the mixing bowl. Add in mustard to help it stay emulsified plus a bit of salt and pepper. Whisk everything well! 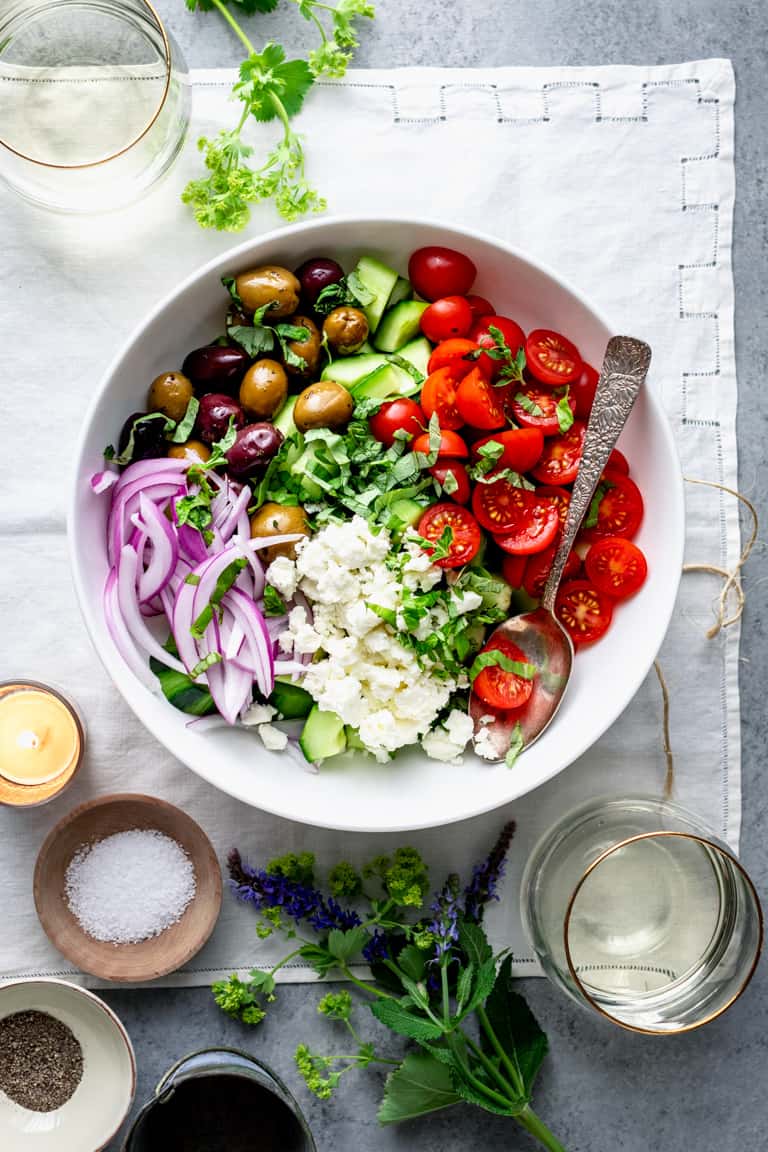 How to Make Greek Cucumber Salad

I use fresh herbs in this chopped salad because it’s a summertime recipe and I always have herbs on hand and they taste much better. If you want to make this with dried herbs, use 3/4 teaspoon each dried oregano and dried basil in the dressing.

Do you need to peel the cucumbers?

If you have regular garden cucumbers, you should peel them, but if you have European or Lebanese cucumbers, you can leave them unpeeled. I prefer these thinner skinned varieties of cucumbers, and like to peel strips of skin off, to make them pretty!

How to remove the seeds from the cucumbers:

To remove the seeds of the cucumber, cut them in half from stem to end. Then use a spoon to scoop out the seeds. This will make the cucumber salad less watery.

How to cut the cucumbers for Greek salad

I like to cut the cucumbers into chunks instead of rounds or half moons. They are closer in size to the rest of the ingredients, and easier to eat this way. I cut them into lengths, then crosswise into chunks about 1/2 to 3/4-inch thick. (See the video for more detail.)

Toss the Greek Cucumber Salad at the last minute

Before serving and once the salad dressing is mixed in the bowl, add in the chopped cucumbers, tomatoes, red onions, olives and feta. Toss well to coat with the dressing. Then sprinkle with the freshly chopped basil. Serve right away, as the cucumbers and tomatoes will start to weep and the salad will become watery. 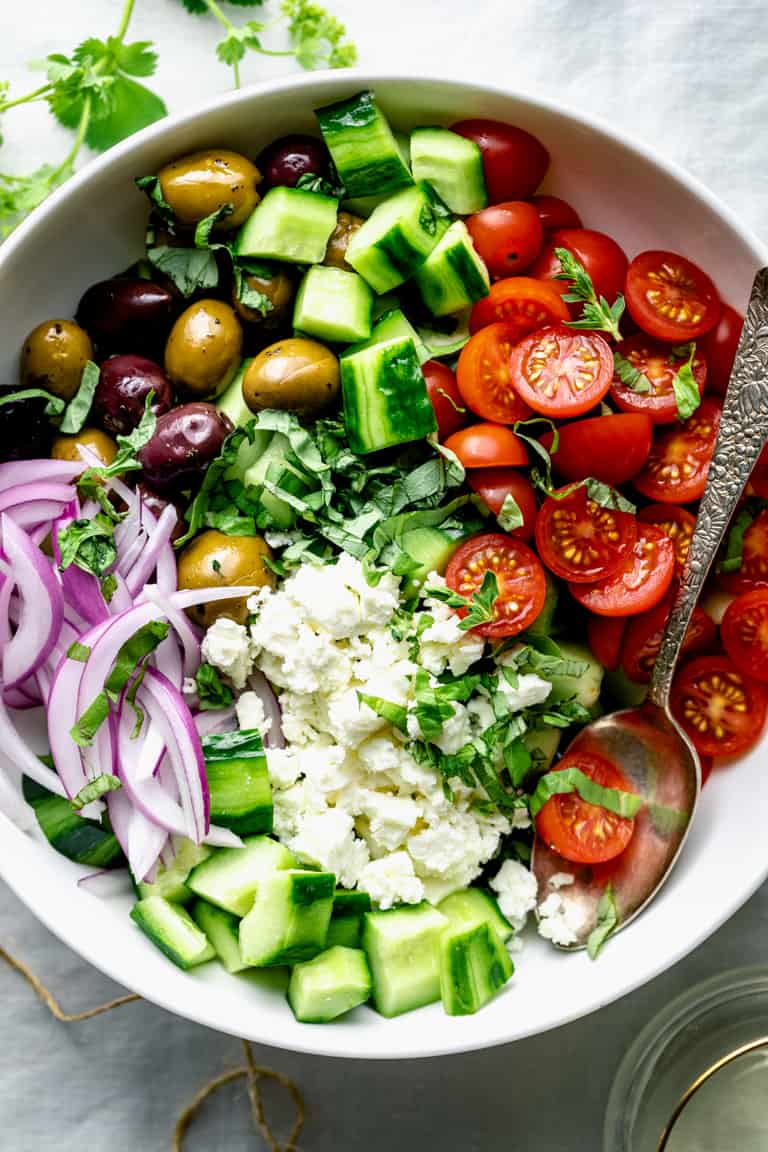 Can you Make Greek Cucumber Salad Ahead?

Yes you can, but you need to keep a couple things in mind.

You can make the dressing ahead and store it in a jar in the fridge for several days. If the oil solidifies, you’ll just need to bring it to room temperature or set your jar of dressing in a warm water bath to liquify it before proceeding.

You can chop the cucumbers ahead too. Just keep them separate from the dressing so they don’t start to weep. (If they get salt on them, they will start to let off their water.)

If you don’t mind the smell of chopped onions in your fridge you can chop them ahead too. I’d recommend not stirring them together with the tomatoes or feta.

Don’t chop the tomatoes ahead. Tomatoes shouldn’t be refrigerated, so wait to cut them until you’re ready to toss the salad.

Add freshly cut basil at the end. If you chop it ahead the cuts will turn black and the taste of the basil will be less strong.

Thanks so much for reading. If you make this recipe for 15 minute Greek Cucumber Salad, please come back and let me know by leaving a rating and review. I really appreciate the feedback.

Here’s a recipe for Cucumber Greek Salad made without lettuce. It’s loaded with crumbled feta, cherry tomatoes, olives and red onion and tossed with a simple homemade dressing. Ready in only 15 minutes. Gluten-free, vegetarian and low-carb.