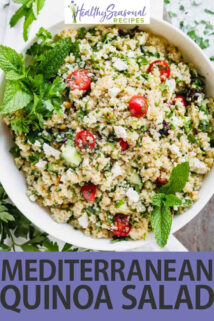 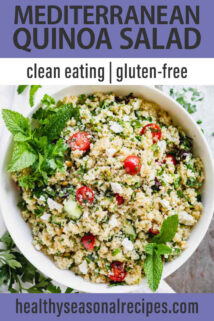 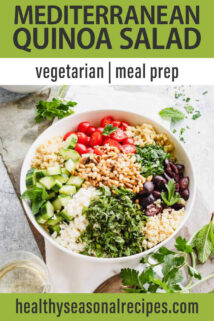 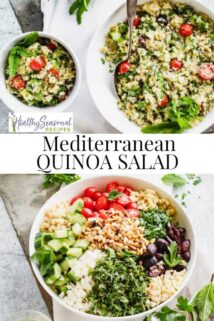 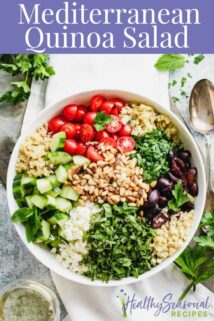 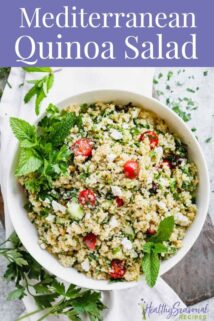 This Mediterranean Quinoa Salad is a healthy and tasty side dish for summer parties. It is popping with flavor and loaded with cucumbers, feta and olives with the addition of parsley and mint. It’s like a cross between Greek salad and quinoa tabbouleh all brought together with a garlic lemon dressing!

Why We Love This Mediterranean Quinoa Salad

After you all told me how much you loved my Southwest Quinoa Salad with Mango and Black Beans I set out to come up with more quinoa salads.

Just in time for summer picnic, barbecue and potluck season I set to work, but I wasn’t sure what kind to make. I was torn with A) making a tabbouleh sort of salad, made with quinoa instead of bulgar and B) doing a Greek salad-inspired quinoa salad with feta, black olives  and cucumbers.

Ultimately I just decided I would add it ALL! I ended up with a Mediterranean mash-up of sorts. It’s like a cross between Lebanese-style tabbouleh and a Greek Cucumber Salad with tomatoes, olives and feta cheese. And friends, the results are DAZZLING!

Ingredients For This Quinoa Salad Recipe

Get the full list and measurements below in the recipe card.

You’ll need dry uncooked quinoa. I like to buy pre-rinsed quinoa so I can skip the step of rinsing it. See why you need to rinse quinoa here and how to do it.

For The Lemon Dressing

If you’re not familiar, this is the way traditional Lebanese tabbouleh (and not so traditional blueberry quinoa tabbouleh) is made. With the bulk of the salad consisting of chopped parsley.

Many tabbouleh recipes also include mint. Mint and it’s relatives grows well in the hot temperatures of the Mediterranean so you’ll find it in a number of traditional dishes from the countries all along the sea.

I love the flavor it adds to the dish! Since it is strongly flavored, you don’t need as much as the parsely, which has a neutral flavor. A half cup is plenty.

This helps to bulk up the serving size of the salad for very few calories, and it also adds a nice juicy crunch. I buy European cucumbers and then remove the seeds with a spoon before cutting it into dice. This helps keep the leftover salad from becoming too wet.

The cherry tomatoes are nice here in this salad because they add lots of sweet flavor, without adding too much moisture.

In a recipe like Panzanella, that moisture is great, but here, we want a nice fluffy texture. I cut them in half so they don’t explode when they’re eaten.

Don’t skip them though, the briny salty flavor really tastes great with the sweet tomatoes and garlicky dressing!

While they’re not traditional in either tabbouleh or Greek salad, Pine nuts are commonly used in Mediterranean cooking because (like mint) they grow great in the area.

I’m so glad I added them because the taste of the rich toasted pine nuts is wonderful paired with the parsley and mint, and the light crunch is really a great contrast with the salad.

How To Make This Mediterranean Quinoa Salad

Since the quinoa has to cook and then cool, make sure that the first thing you do is to rinse and cook the quinoa. You can prep the dressing and cut up the veggies while the quinoa cooks.

This lemon dressing is very simple. It’s made with only four ingredients!

The key is making a paste with the garlic and salt. This is a technique I commonly use for salad dressings, such as in my spinach salad or Caesar salad dressing because I like to use a small amount of raw garlic and allow it to dissolve into the dressing. This gives each bite of the salad an overall garlic flavor without big chunks of raw garlic.

How To Make Garlic Salt Paste

Then you’ll need to juice of a juicy lemon (1/4 cup) plus 3/4 cup of olive oil. Whisk everything together in a large bowl.

Add the hot quinoa to dressing for the best flavor

Next add in the “mix ins.” And then stir everything together.

Quinoa is the seed of a plant native to the Andes mountains in South America where it has been grown for thousands of years. The plant is botanically related to amaranth.
Quinoa is healthy because it is naturally higher in protein than most whole grains (7 grams per 1/4 cup of dry quinoa versus 3 grams for brown rice.) It is also a source of iron, folate and magnesium and also a source of Zinc.

Yes! This recipe is bursting with healthy ingredients. Parsley is high in Vitamin C and  tomatoes are high in lycopene.
Thanks to the pine nuts and olive oil this salad is a good source of healthy unsaturated fats. Saturated fat should only take up 10% of your total calories.
This recipe follows the guidelines of the Mediterranean Diet, which is widely considered one of the healthiest diets in the world.
For those of you who follow a gluten-free diet, you’ll be happy to know that quinoa is naturally gluten-free!

Can Quinoa Salad Be Made Ahead?

Yes. Keep it in the refrigerator up to 2 days. Stir well before serving. If you are making it for a special occasion, I would recommend making it only 6 hours ahead, so that the vegetables don’t weep and the olive oil doesn’t start to harden up the texture of the salad.

If you are hoping to prep it ahead, and don’t want to worry about wilting. Follow through step two (let the quinoa cool in the dressing.) And then keep the cut vegetables, feta, pinenuts and herbs separate. Stir it together just before serving.

Is Quinoa a Whole Grain?

No quinoa is not a whole grain if you look at the botanical definition of what a grain is. Whole grains are seeds of grasses. Quinoa is also a seed but comes from another type of plant in the Amaranth family, not from a grass at all.
To make matters confusing, quinoa is often referred to as an Ancient Grain. Which means it has not been genetically modified over the years.
For practical purposes, when a health expert says to eat mostly whole grains, know that quinoa can be lumped in with actual whole grains because it serves a similar purpose of “starch” or “cereal grain” in our diet.

Why Does Quinoa Have To Be Rinsed?

Quinoa has to be rinsed because the plant it comes from produces a naturally occurring substance called saponin that helps to protect it from birds and pests. It is bitter to the taste and has a soap-like flavor. It can easily be rinsed off.

As I explained when I shared my Quinoa Stuffing, quinoa is sold pre-rinsed or not. You will have to look at the packaging to see if yours is pre-rinsed or not. If you bought it in the bulk department, err on the safe side and give it a rinse!

How To Rinse it:

Menu Ideas For This Recipe

If you’re wondering what to serve this salad with, here are some ideas:

For more quinoa ideas make sure to check out my post of more than 30 quinoa recipes.

This Mediterranean Quinoa Salad is a healthy and tasty side dish for summer parties. It is popping with flavor and loaded with cucumbers, feta and olives with the addition of parsley and mint. It’s like a cross between Greek salad and quinoa tabbouleh!

To Make this salad ahead of time, and don’t want to worry about wilting. Follow through step two (let the quinoa cool in the dressing.) And then keep the mix ins cut but separate. Stir it together just before serving.