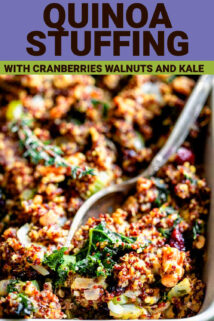 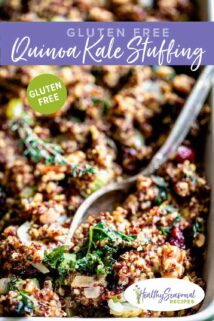 Here is an easy, healthy and Gluten-free Stuffing Recipe made with quinoa, kale and walnuts for a wheat-free twist on Thanksgiving stuffing. The flavors are traditional, with celery, sage and dried cranberries, but there is no bread or gluten. {Bonus it is also egg-free for those with egg allergies.} 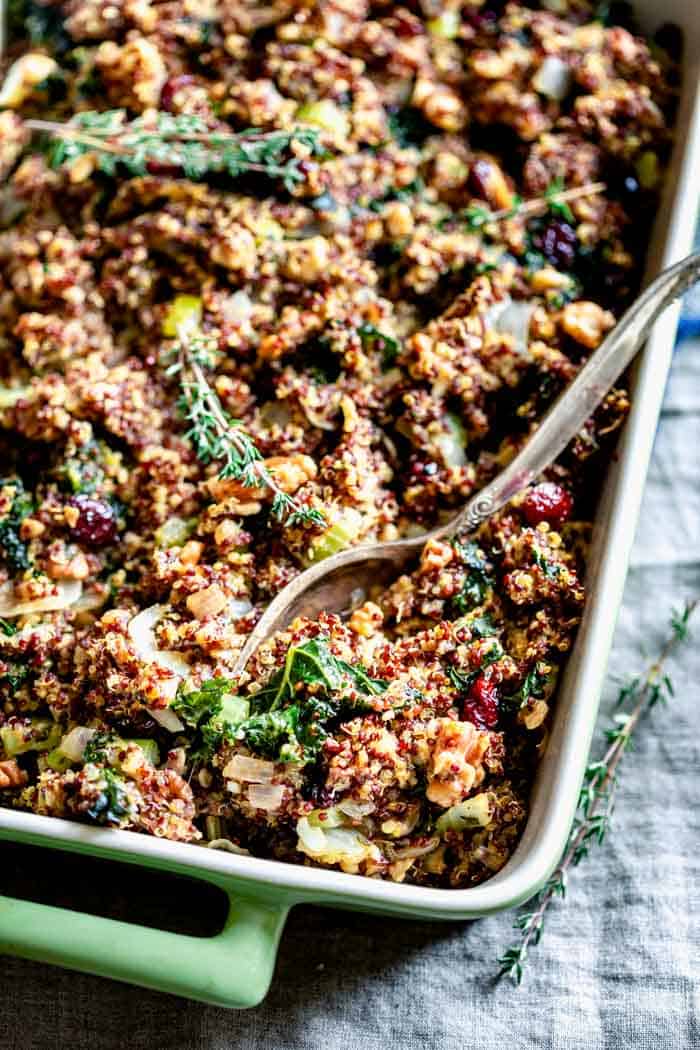 I remember, a million years ago when the dinosaurs lived and I was in college, having a conversation with my friend Ezequiel who was from Mexico, about how there are certain words in Spanish where there is no true translation in English and vice versa. He explained that you had to talk your way around it, to explain the meaning of the word. I remember him saying that it was frustrating to know that there is a simpler way to say something.

I often think of that conversation, and about trends in words and expressions. About how cultures create words because there is a need for it. Words that just appear out of seemingly nowhere and then suddenly everyone is using them. Slang that eventually becomes accepted.

Like FOMO for example. {Aside: Which isn’t really a word, it’s an acronym for Fear Of Missing Out, but stick with me. I have a point.} I think I saw it on a bumper sticker or something the first time. I was like I HAVE THAT! Like always! I was so glad to know there was an easy one word way of describing that feeling that I live with. Just like Ezequiel and I had talked about.

I suspect it is the nature of our digitalness (oh there’s a good one) and the constant barrage of information and accessibility to everything at our fingertips has heightened our collective need to put a name to that feeling. Because we are all suffering from FOMO. And we all wanted to name it something. And so we created FOMO. 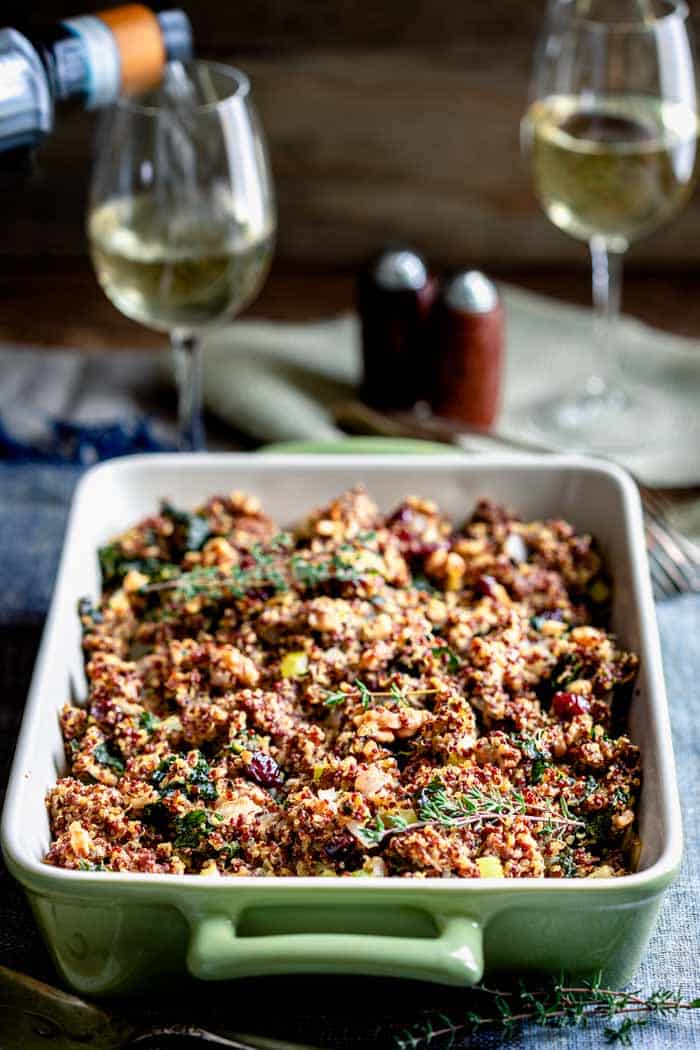 What does FOMO have to do with Thanksgiving stuffing?

Thanksgiving and the planning thereof is the pinnacle of American culinary FOMO.

If the fact that these green beans are going bananas on Pinterest right now, I am not making this up. I think our collective FOMO about filling every millimeter of our Thanksgiving plates with the very best recipes is at a fever pitch even earlier than ever. Thank you Pinterest.

But I’m going to let you in on a secret. You ARE going to be missing out. There is no possible way for you to have all the stuffings in the world. And there ARE so many good ones. Including this one! It is great in fact, and all of the gluten-free people at your table will thank you for serving it! Sorry. The struggle is real. But, just keep reminding yourself, and I will too, that when it comes down to it, the only thing that really matters on Thanksgiving is not missing out on being together. 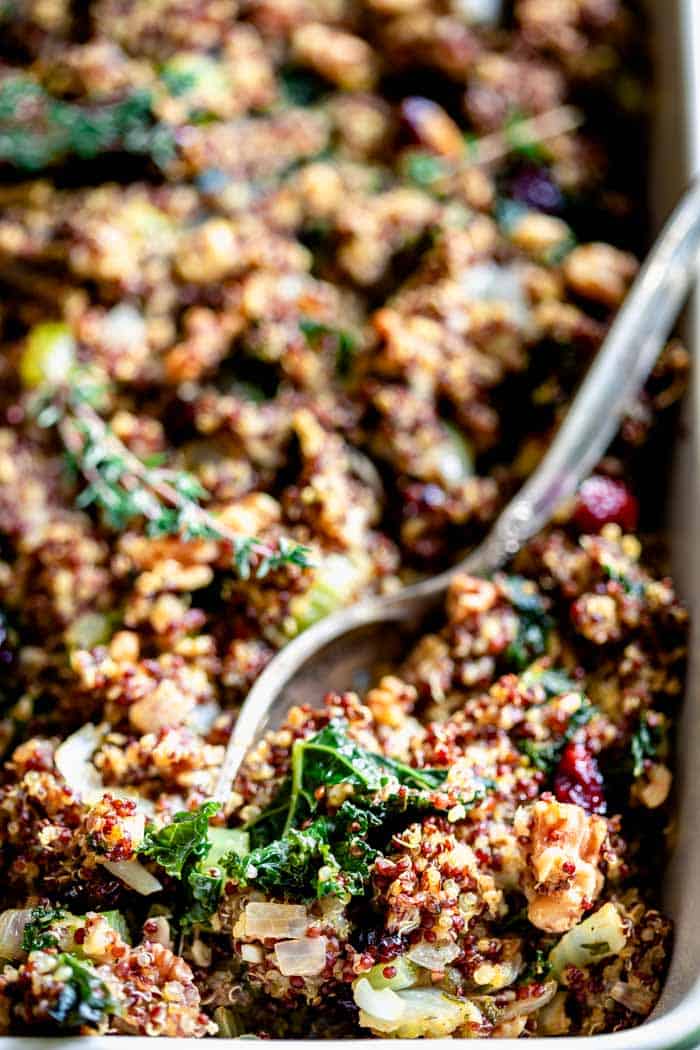 While you’re In FOMO Thanksgiving dinner planning mode, don’t miss out on this awesome Gluten Free Gravy by Gluten Free Palate. It’s ready in 5 minutes! Or my Mom’s Cranberry Relish.

How To Make Gluten Free Stuffing with Quinoa

Cook Quinoa on the Stovetop

Sauté the Vegetables to Soften 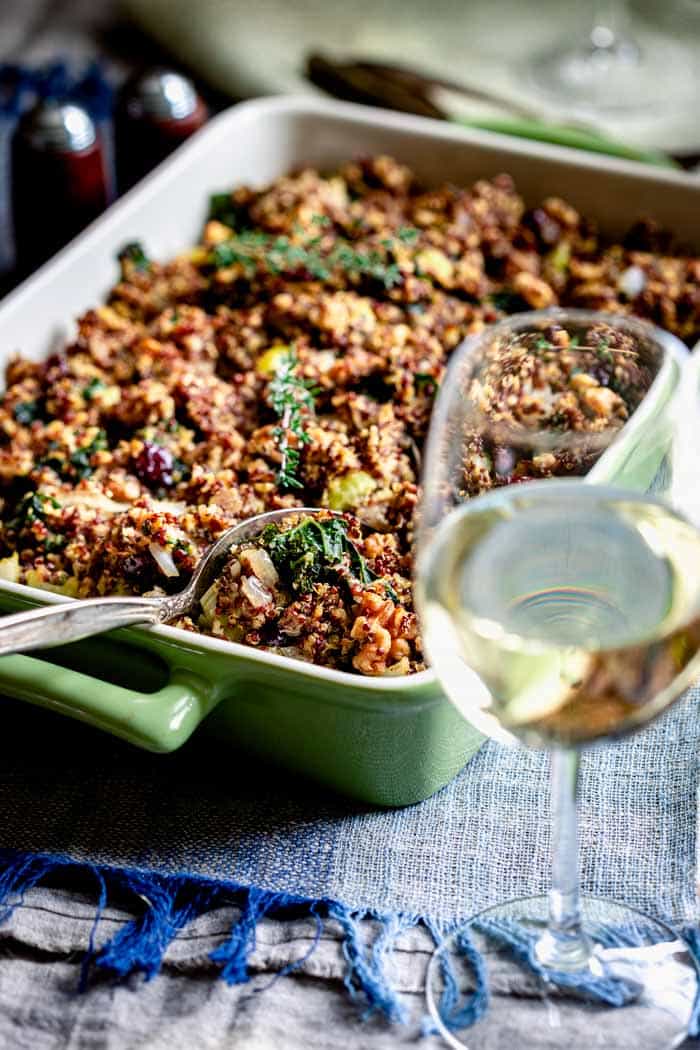 The stuffing is already cooked at this point and there is no egg in it, so the step in the oven is merely there to warm it through, allow the flavors to marry and to let the top get a little crusty. This takes under a half hour.

To Make The Stuffing In Advance

You can make this gluten-free stuffing ahead and store it covered in the refrigerator for a day in advance. Then to reheat the stuffing, cover it with foil and place it in the oven, when it is hot and steaming, remove the foil and continue to bake it for 15 to 20 minutes longer.

Thanks so much for reading! If you make this recipe, please come back to let me know how it goes by leaving a review and rating!

For more recipes with kale, check out this Ultimate Guide to Kale!

Here is how to make an easy gluten-free stuffing with traditional flavors of sage, cranberry, walnut and celery. It is made with quinoa has fresh kale it it!

To make ahead: Can be prepared through step 4 up to 24 hours in advance. Heat covered with foil for 20 minutes before removing foil and continuing with directions in step 5. 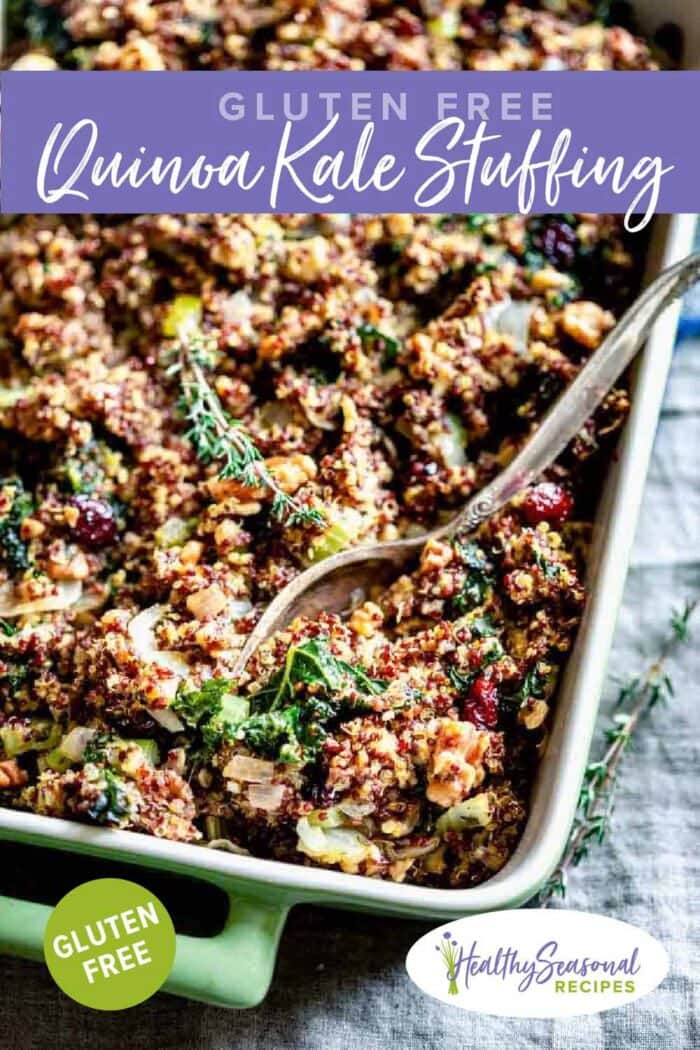 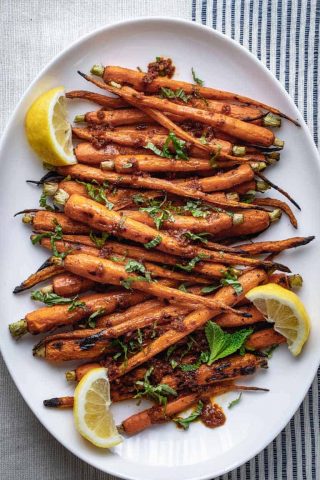 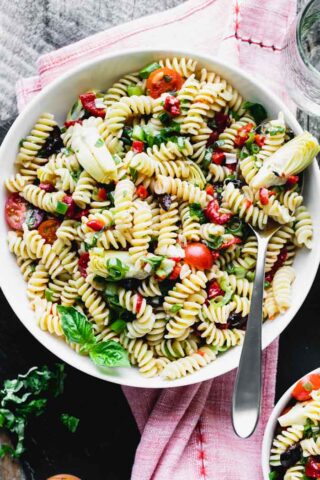