I promise this Sesame Coleslaw will be your go-to salad this Summer. You can whip it up in just 15 minutes and the super yummy Asian flavored dressing turns the crunchy cabbage and carrots into a mouth-watering bite. Not to mention it is Vegan, Paleo and Gluten-Free!

I originally shared this recipe on February 11, 2014. I have updated the images and some of the text today.

But it wasn’t really the end of it, because she got me thinking about knife skills, and about the fact that I make a lot of assumptions about what is understood. We all know what assuming does, right? So today I want to clarify what the difference is between the different cuts, and hopefully make it even easier to follow the recipes here.

Knife skills are so basic to cooking, that on my very first day of culinary school (after we received our knife kits) the head chef, David Hale took us group by terrified group into one of the kitchens and gave us our very first knife skills class. He taught us the NECI standard of how to dice an onion. The exact technique that I still use today. 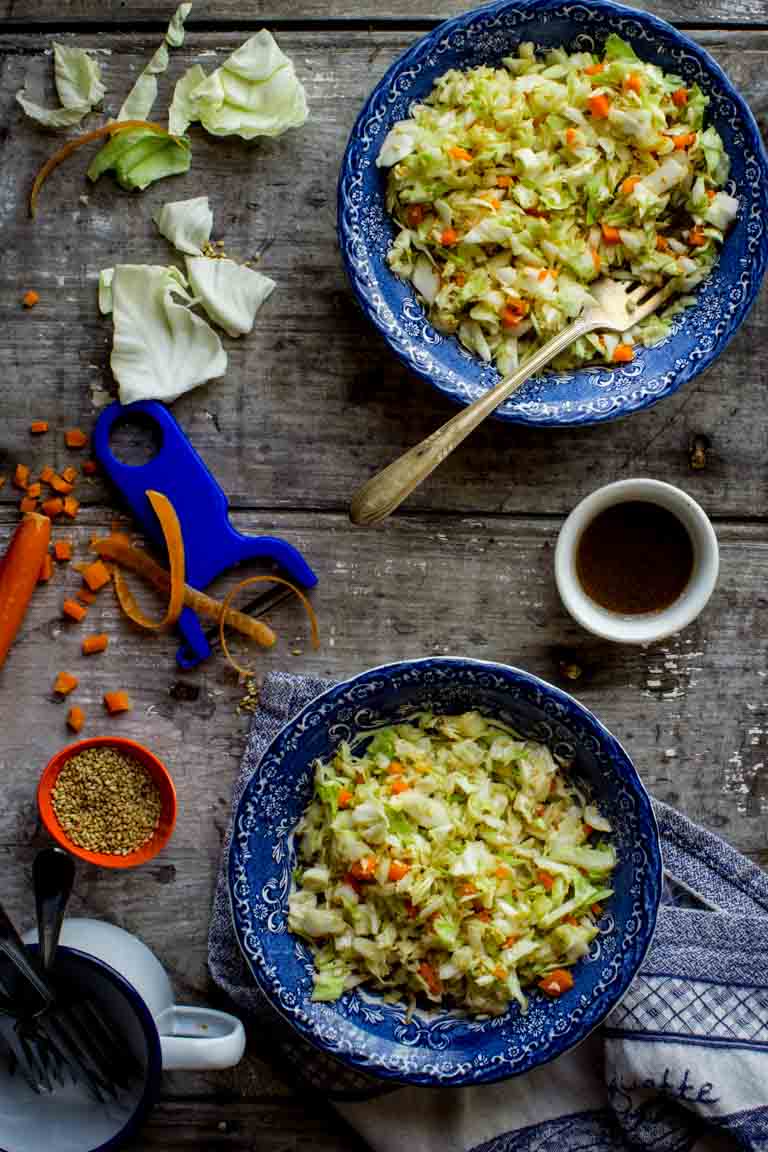 Later that semester, we all had more in-depth knife skills classes. In fact, knife-skills were woven into many of the first year classes, getting more complicated as we went. We went over everything, starting with the basic foundation of organizing our cutting board so that we always worked left to right. And were told to always keep our knives razor sharp. All the first years started off with mastering  the perfect small dice, medium dice and large dice and gathered steam until we could tournee a potato or quickly flute a mushroom. We were taught that it is okay to start slow as long as the cuts are even, the speed would come with practice. We were taught how to hold our finger-tips tucked under so that we wouldn’t have to use the first-aid kit (as often.)

There are many many different knife cuts.

What does Dice mean?

Dicing means to cut into a cube. Dicing is different than chopping because it is more precise. In the above image notice how small the ‘small dice’ is? Sometimes this is called ‘finely diced.’ The medium dice, which is about ½-inch, is pretty standard. A lot of time, when I call for ‘diced’, I don’t specify small medium or large, in that case this medium-dice is what I am talking about. The large dice on the other hand seems pretty big to me, that would be good for roasting vegetables or something that would cook for a long time like in a stew.

A really tiny dice is a brunoise. Seen above. (STEP 1.) As with the other dices to keep a perfect cube shape when you cut the brunoise, you have to cut the vegetable into evenly-thick slabs first (for a brunoise they would be1/16-inch thick. For a small dice they would be ¼-inch thick and so on.) (STEP 2)Then cut the slabs a small stack at a time into sticks (this is called a julienne I have called them matchsticks here.) (STEP 3) Then cut the matchsticks into tiny little cubes. Just scale that up when you are talking about small, medium and large dicing. [Dorky note: French culinary term: At this scale, instead of calling the step 2 cut a julienne, these thicker ones would be called batonnet. That’s more like a short french fry size.]

Mince technically is like a tiny brunoise believe it or not. Meaning little tiny tiny cubes. In culinary school we actually cut garlic in the same fashion as the standard onion dice, just on a micro scale. [Just so you know, I don’t do that very often anymore. When I mince garlic, I just make sure it is super finely chopped. If you want to mince in the true way, go for it. Sometimes, I will go even a step further and I will finely chop the garlic and then mash it with salt so that it forms a paste. This is really good when it goes into a vinaigrette raw. That way you don’t get a big harsh burst of raw garlic.] 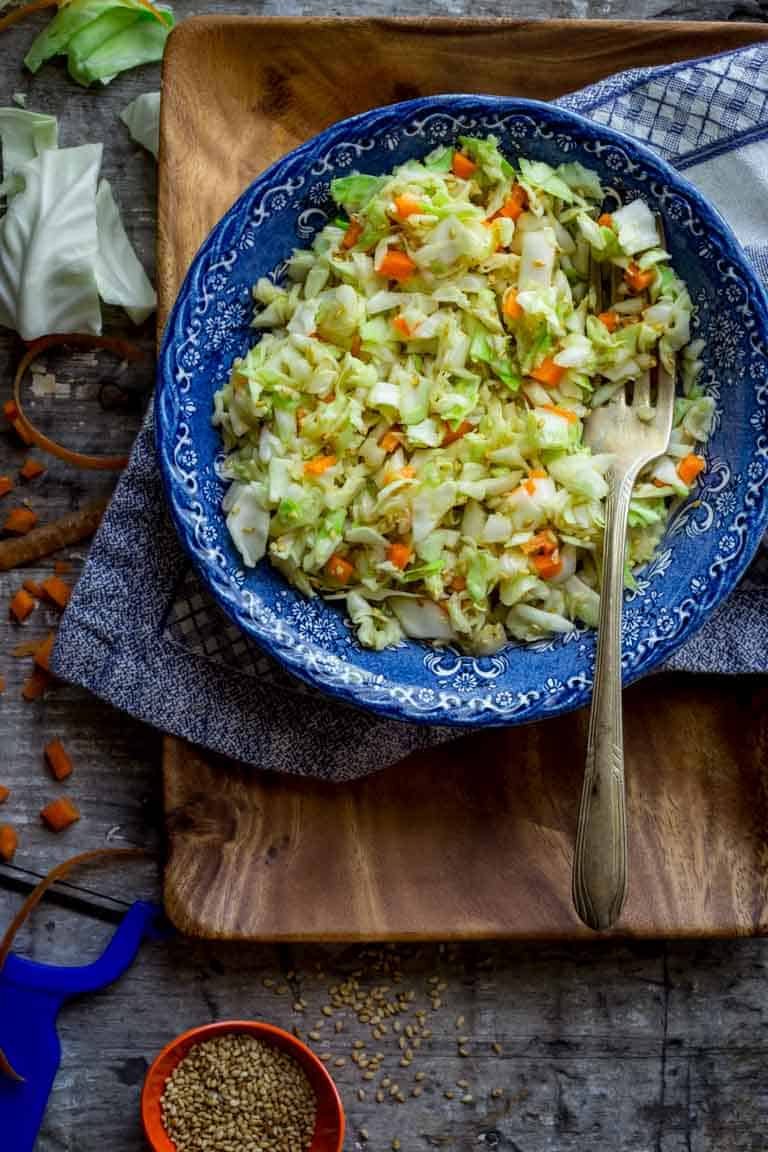 What does Chopped mean? What is a chunk?

Chopping means cutting in a more hap-hazard fashion. Chopping is appropriate when it is okay if the pieces cook less evenly, like for more rustic soups, or you aren’t trying to make something look fancy. When a soup is going to be pureed for example, chopping is clearly a better way to go than to make perfect cubes. I like to call for chunks sometimes too. That again means, no need to make a cube, just work with the natural curvature of the vegetable or whatever you are chunking up.

Because I am a test kitchen nerd, I will also call out a specific measurement too if it really matters, like for this Potato, Kale and Andouille soup recipe, I called for 1 ½-inch chunks. That matters because if you cut the potatoes smaller they will overcook in the specified time.

Which direction do I slice?

So back to my reader and the slice. Slicing is cutting into evenly-thick pieces across the entirety of whatever you are cutting. Slicing is confusing because every vegetable you slice, for the most part (even the round ones) have a top and bottom and an equator. Generally, slicing means cutting with your knife held parallel to the equator (or crosswise.)

There are exceptions. A French- cut onion, for example, is an onion that is sliced lengthwise, into strips, from root-end to top. [As far as I know there isn’t a culinary term for slicing a halved onion crosswise, so I made up the term Philly-cut onion you can see further explanation and pictures to see the difference and what each would be used for here. ]

Another common exception would be a bell pepper, seen on the slate above. In that case, the cook is trying to avoid the seeds, so the pepper is more commonly sliced lengthwise. For slicing meat, usually it is cut crosswise. But since there are so many cuts of meat, it can sometimes be hard to tell what that means. So in that case, a recipe may specify against the grain. 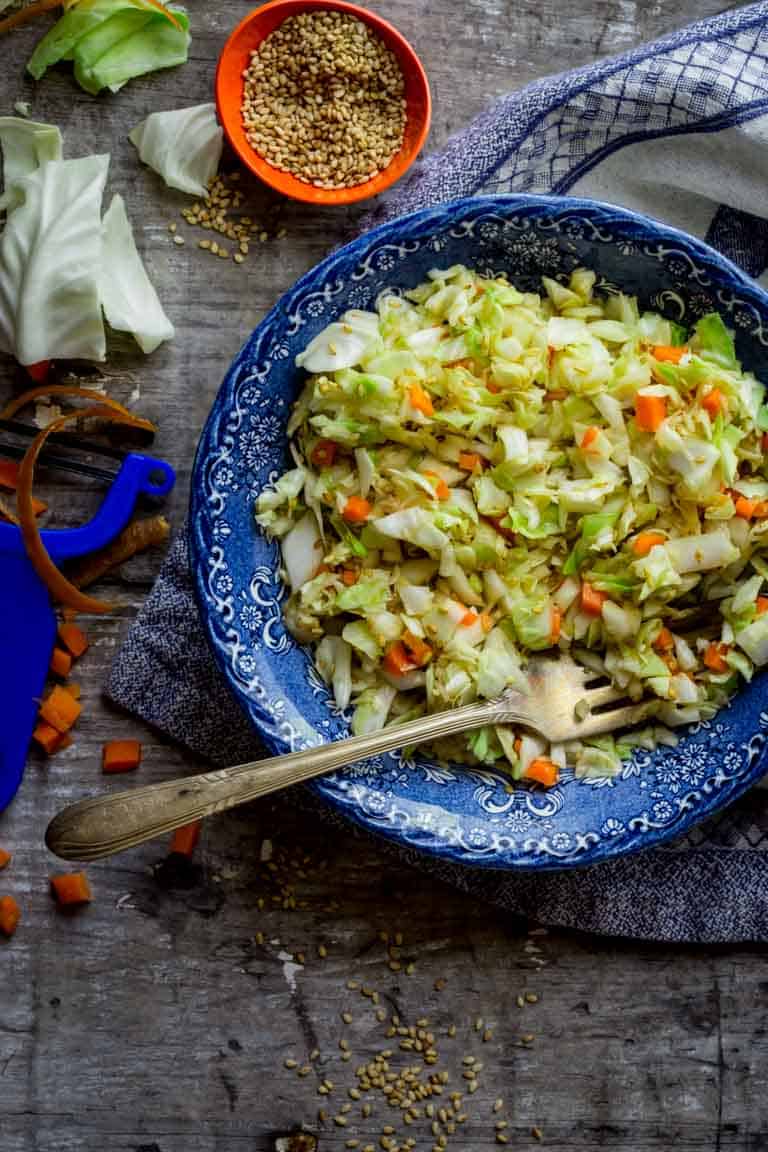 For this sesame coleslaw I cut the cabbage into slabs, and then I chopped the slabs. I wasn’t really that concerned about the perfectness of the pieces, or the uniformity. For the most part I ended up with strips and squares. The pieces are uneven but all small enough that they can get scooped up by the delicious forkful. To contrast with the rustic cabbage cuts, I brunoise cut the carrot. Maybe it is the is the food stylist in me coming out. But I really love seeing those neat little cubes of carrot dancing around in the rustic mixed cabbages.

PS–> If you’re looking for a recipe to serve this Sesame Coleslaw with, try it with short grain brown rice and these uber delicious Korean BBQ Meatballs.

I promise this Sesame Coleslaw will be your go-to salad this Summer. You can whip it up in just 15 minutes and the super yummy Asian flavored dressing turns the crunchy cabbage and carrots into a mouth-watering bite. Not to mention it is Vegan, Paleo and Gluten-Free!

**Ingredient note: to make this PALEO, substitute coconut aminos for the tamari.
*Ingredient note: Flax seed oil, or FLAX OIL is a great source of plant-based omega-3 fatty acids. Getting more omega-3s in our diet is super- important for combatting inflammation. Flax oil can be found in the refrigerated section of health food stores and large supermarkets. It is heat sensitive, so don’t cook with it and be sure to store it in the refrigerator. It has a slight nutty/fishy flavor, so it is best when paired with bold flavors like those in this dressing.