Healthy Sweet and Spicy Slow Cooker Short Ribs! They are so flavorful with a mushroom, ginger and soy gravy that is rich and delicious! 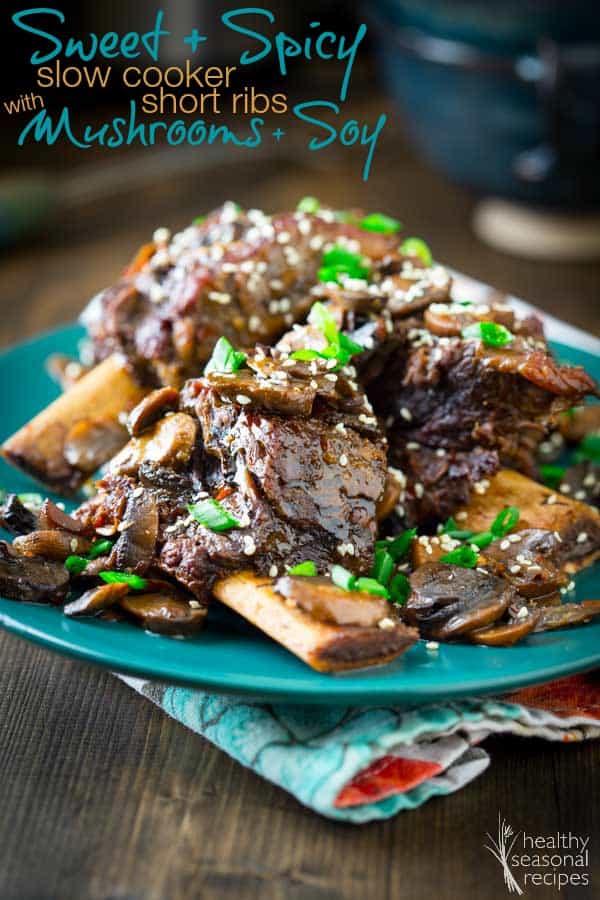 Yesterday morning at 8 am, I stood up from my desk, hypothesis draft of this recipe hot off the printer (trying to not sound like a six-year-old facing down the green faced long fingernailed witch in her closet) and said, “I’m not afraid of you!” But truth be told, I was afraid of these slow cooker short ribs. And chances are that the three brave of you who are left reading this while the rest of the people have run away screaming at the mere name of this recipe are still a little intimidated by the idea of cooking short ribs.

Truth also be told, I wouldn’t have even attempted to try cooking them at all if we hadn’t gotten a package of them in our mixed box of frozen grass fed beef a few months ago. And there they have been waiting for me in all their intimidating bone-in glory. Not today guys, I’ve been saying as I reach for the stew meat or ground beef.

But something had moved me to thaw them this time. Maybe it was that I was so relaxed after my trip to Mexico. Or maybe I was just having the first of many senior moments to come (now that I am 39 ½), and I thought it was actually a package of bacon. I don’t know. Whatever it was, there the short ribs were, thawed and waiting for me as I looked into the depths of my slow cooker. And I was in fact afraid. 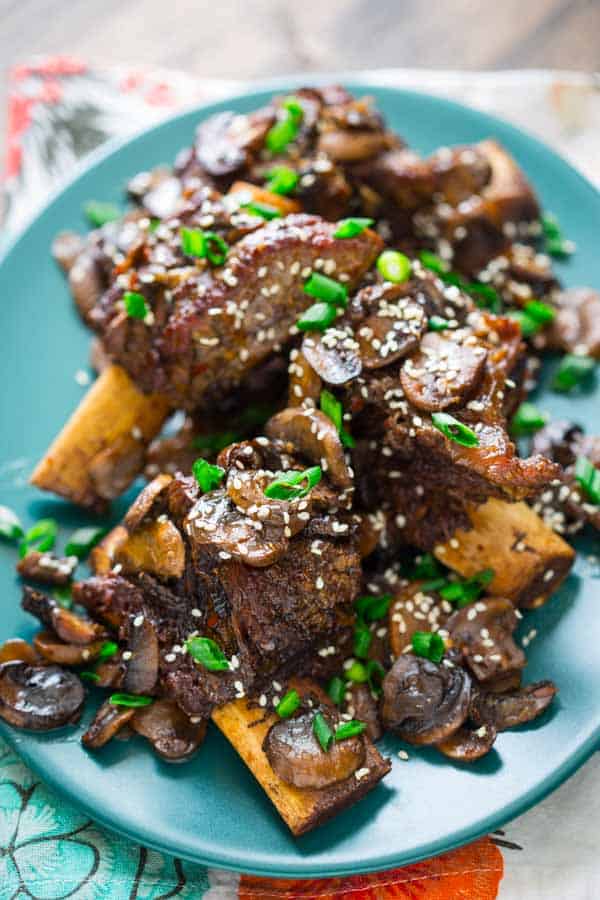 If I had an Instant Pot, I would have made them like these Instant Pot (Pressure Cooker) Beef Short Ribs Recipe. But I don’t have a pressure cooker yet, so the slow cooker it was. So, I went for it anyway. And now, having spent only 15 minutes getting the ribs cut and seared and smothered in spicy sweet sautéed mushroom sauce and then in turn enjoying the hella yummy aroma that emanated from the slow cooker for the rest of the day, I am here to tell you three FEAR NOT, my people, fear not.

Because then comes the eating part. In case the ease of preparation part doesn’t entice you, let me sell you on them by telling you how succulent these babies are.

I get it. If the idea of figuring out an unusual cut of mystery meat scares you too, maybe it will alleviate your worries a bit if I tell you this: the meat gets so tender that it slips right off the bone, so even if you some how don’t cut it up “right” or you are not sure what you are looking at… that’s totally okay. It will be so galdarnedsoftandtender when it is ready you won’t care. And then there is the sauce.

I think the spicy mushroom sauce may be even more of a clincher for me really. The level of sweetness is so necessary to cut the fiery zing of the ginger and hot pepper flakes. I love the umami mushroom and soy combo too. Gah you guys. ‘Stuffs good! All three of you, repeat after me, “I am not afraid!” 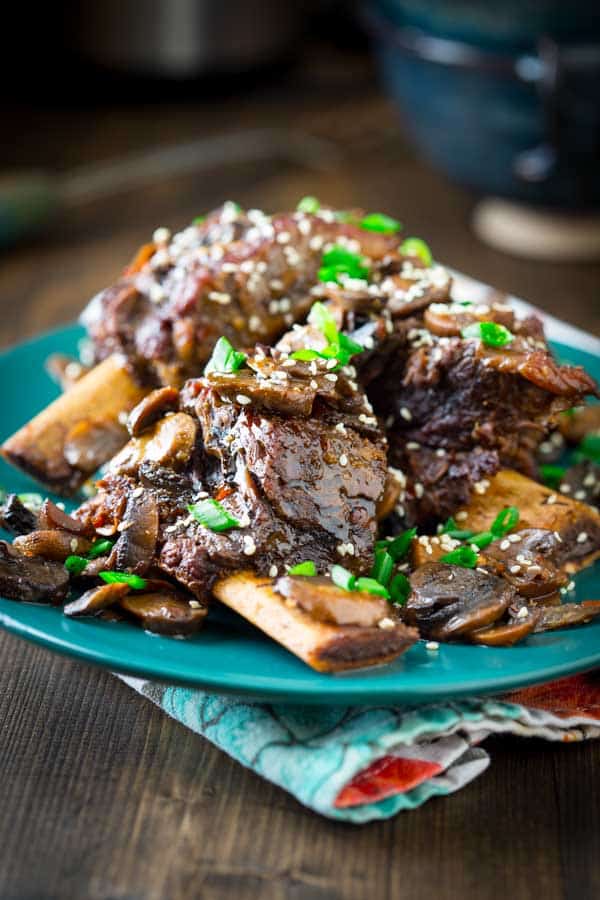 In the spirit of making this scary-sounding cut of meat a breeze to prep, I’ve kept the steps for this recipe super simple. You’ll first need to pat the ribs dry (very important!) and sprinkle them with salt. Then, sear them in a well oiled pan until they’re browned on all sides. Transfer the ribs to your slow cooker, and add a little more oil to the pan. Sauté the mushrooms just until they begin to release their juices and then stir in the gravy ingredients.

Add all the mushroom goodness to the slow cooker, and then pop on the lid and let those short ribs cook on low for 6 hours. Be warned: your kitchen will smell amazing after those 6 hours. You will want to open the lid of the slow cooker to gaze longingly at these slow cooker short ribs, but you must resist! (Okay, I’m kind of joking. But they are really good). 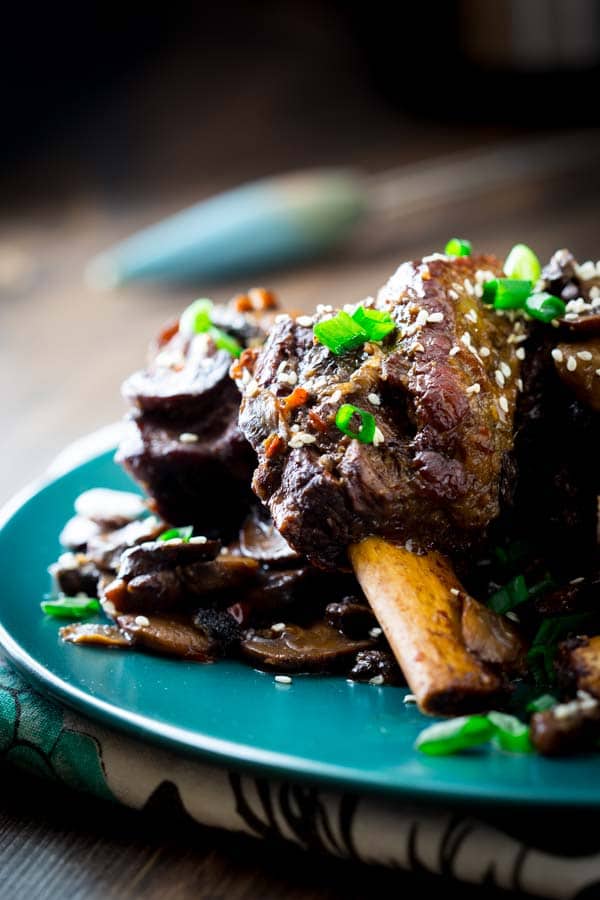 More short rib info than you’ll know what to do with on the Kitchn.

Need some liquid courage? Try a Mumbai Mule from the Bojon Gourmet.

This Power Salad with Peanut Dijon Dressing from Meg is sooo happening in this kitchen asap.

If you are in the mood for a laugh out loud tear jerker read this awesome post by Carrie about her foul mouth baking Bambi and then drool a bit over her Maple Cinnamon Rolls.

Don’t be intimidated by the name, these slow cooker short ribs take only 15 minutes to get into the crockpot. Then they become meltingly tender and so spicy and sweet! I love the flavor and the umami sauce with mushroom and soy.

*With the bone, 1 ¾ pounds of bone-in short ribs will give you 4 portions of cooked meat. Depending on how you purchase them you will have either 8 small or 4 standard ribs