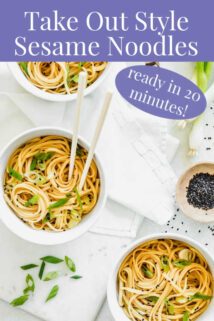 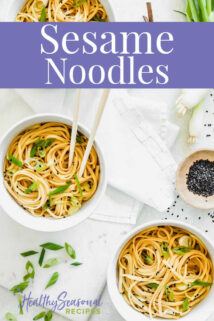 Today’s recipe is a super easy pantry-friendly recipe: takeout style sesame noodles made with whole-wheat pasta tossed with rice vinegar, toasted sesame oil and scallions. It’s super basic and just the kind of recipe you want to have on hand any time of year. 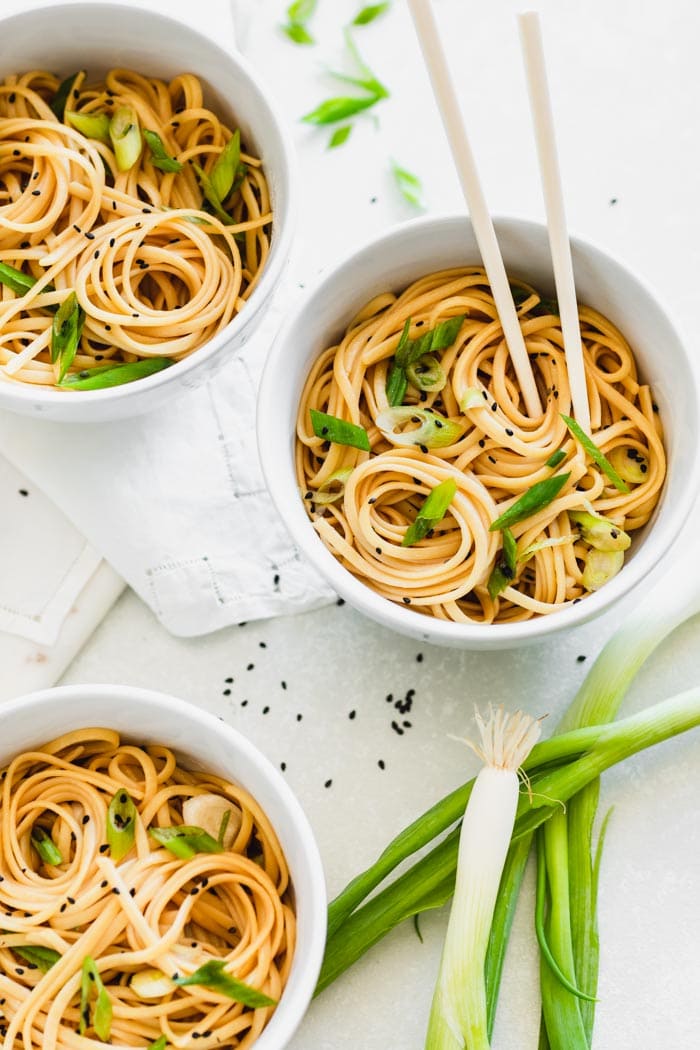 This recipe was originally published on June 16th, 2015. I have updated the text and images to re-share with you today.

I created this recipe years ago for a friend. She asked me to reverse engineer the sesame noodles from the deli at a local cafe. Her daughter Alison was in love with them and my friend was in turn spending ridiculous amounts of money on them (and wasting lots of plastic deli container packaging) every month. I came up with this recipe for her and shared it here. Today I am excited for you to try them too!

They are so easy to make and just as good as any takeout sesame noodle you’ll try! 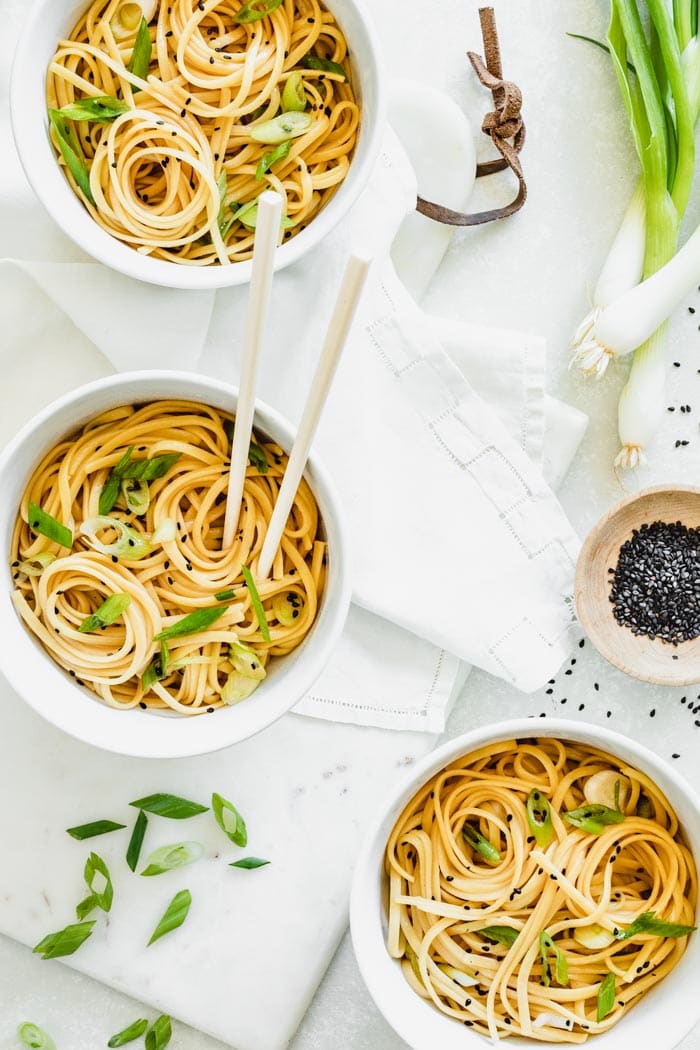 What Are Sesame Noodles?

Sesame noodles are a cold side dish made with wheat noodles and sesame dressing. Sesame noodles are noodles tossed with dressing made with toasted sesame oil or Chinese sesame paste. They are usually served cold and quite simple in their presentation and ingredients. Some versions are spicy and some also include peanut in them.

They are a popular takeout item from Chinese or Asian restaurants and have many variations. This one that I am sharing today is typical of the kind we see commonly in the US. According to the New York Times what we know here as Sesame Noodles is more of a American Chinese recipe which was popularized in the 1970s.

This version of sesame noodles have an easy to slurp texture (they’re sort of slippery) because they’re tossed with an oil and vinegar based dressing. They are similar to Peanut Noodles (which is another popular cold Asian-style noodle dish with nutty flavors) but Peanut Noodles have a stickier/tackier texture. 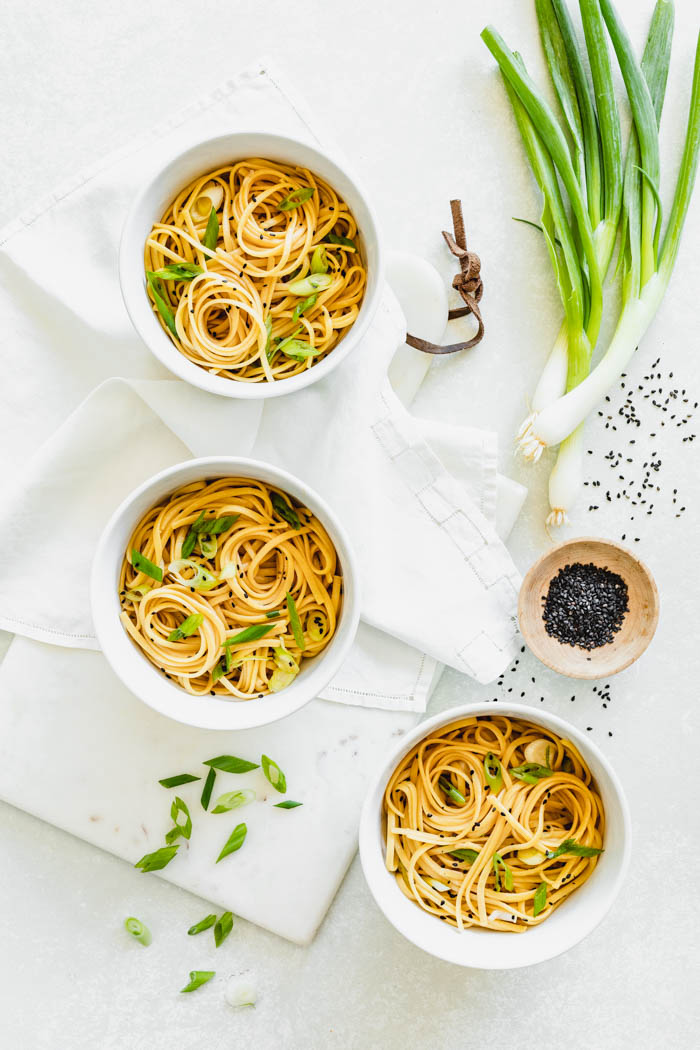 To make this a user friendly recipe I wanted to call for ingredients that were easy to find. While some Sesame Noodles will call for Chinese sesame paste, but I didn’t want you to have to make a special trip for that. So I used toasted sesame oil.

To give the dressing balance I added the rice vinegar for an acidic element. Make sure to look for natural or unseasoned rice vinegar. The kind labeled as “seasoned” also contains sweetener and salt too!

To sweeten it up ever so slightly I used agave syrup because it is liquid and neutral in flavor. If you don’t have that you can use maple syrup. Or you could always use sugar, just be sure to whisk it until it dissolves into the dressing.

To finish off the sesame noodles, I added in a small amount of sliced scallions (or green onions.)

While the black sesame seeds don’t really do much for the flavor of the recipe they do add a nice visual element. If you can’t find them, skip them or use white sesame seeds. 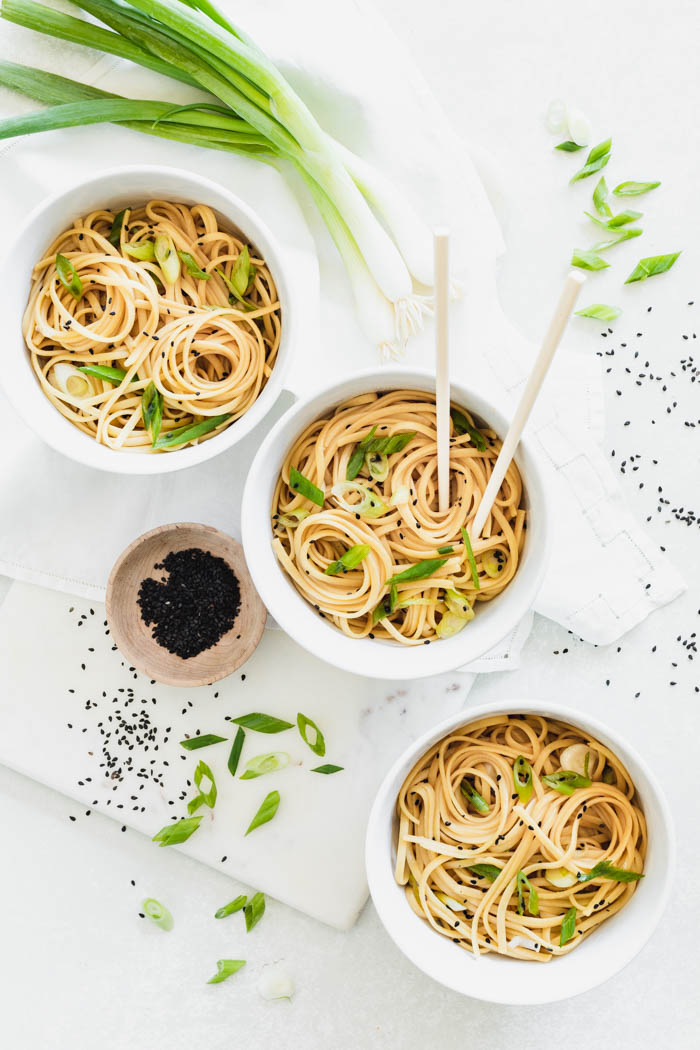 How To Make Cold Sesame Noodles

Mix Together and Serve

How To Make Gluten-Free Sesame Noodles

Meal Prep and Make Ahead Tips

These sesame noodles are great for a make ahead dish for meal prep or for making ahead.

These sesame noodles last up to five days if properly stored in a refrigerator. That said, the scallions don’t hold up that well, so you can wait to add them later if you want them to be crisp and bright green.

How To Make Them Ahead

Step-By-Step Photos To Make This Recipe 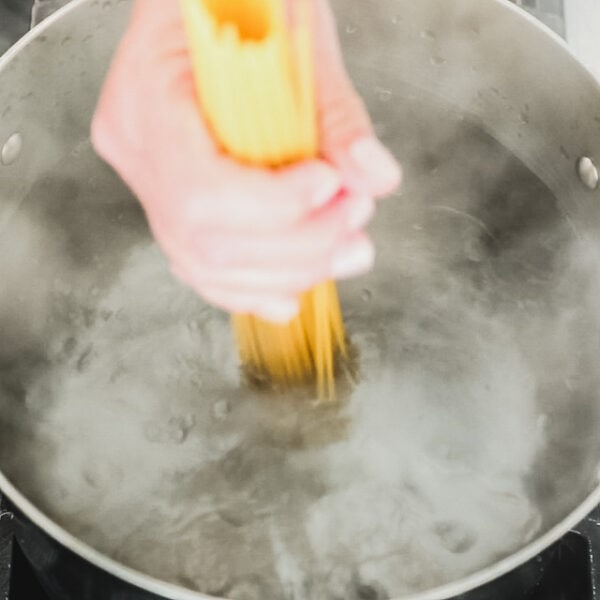 1. Boil linguine according to package instructions. 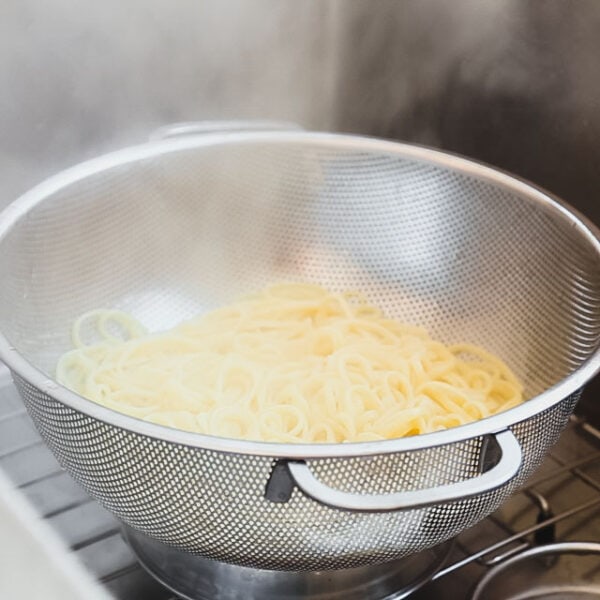 2. Drain the pasta and rinse with cold water. 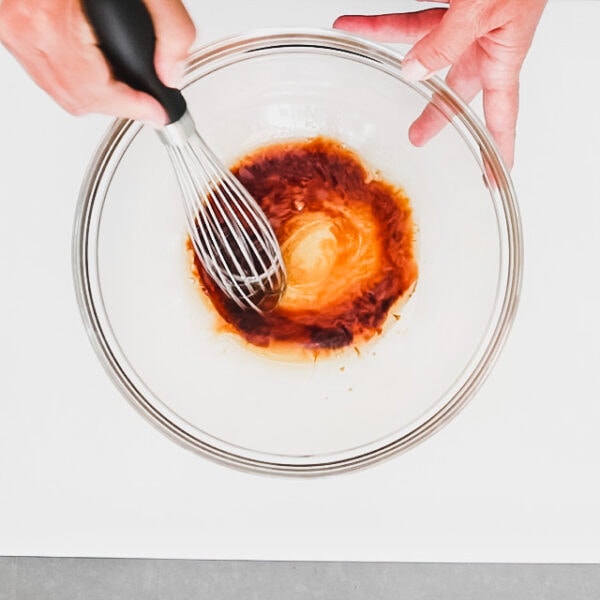 3. Whisk the sesame oil, soy sauce (or tamari) agave (or maple syrup), vinegar and salt in a large bowl. 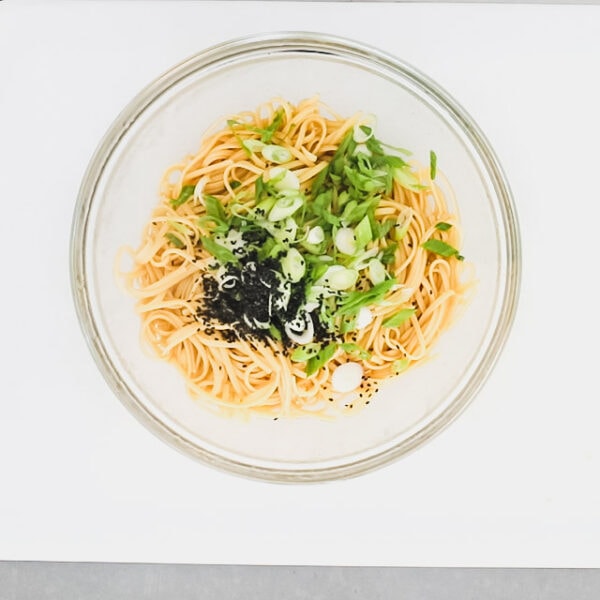 4. Add the drained cooked and cooled noodles, scallions and black sesame seeds to the dressing. Toss to combine.

Thank you for reading. If you make this recipe, please come back and leave a star rating and review!

These easy Sesame Noodles are made with whole-wheat linguine tossed with toasted sesame oil, scallions and black sesame seeds. 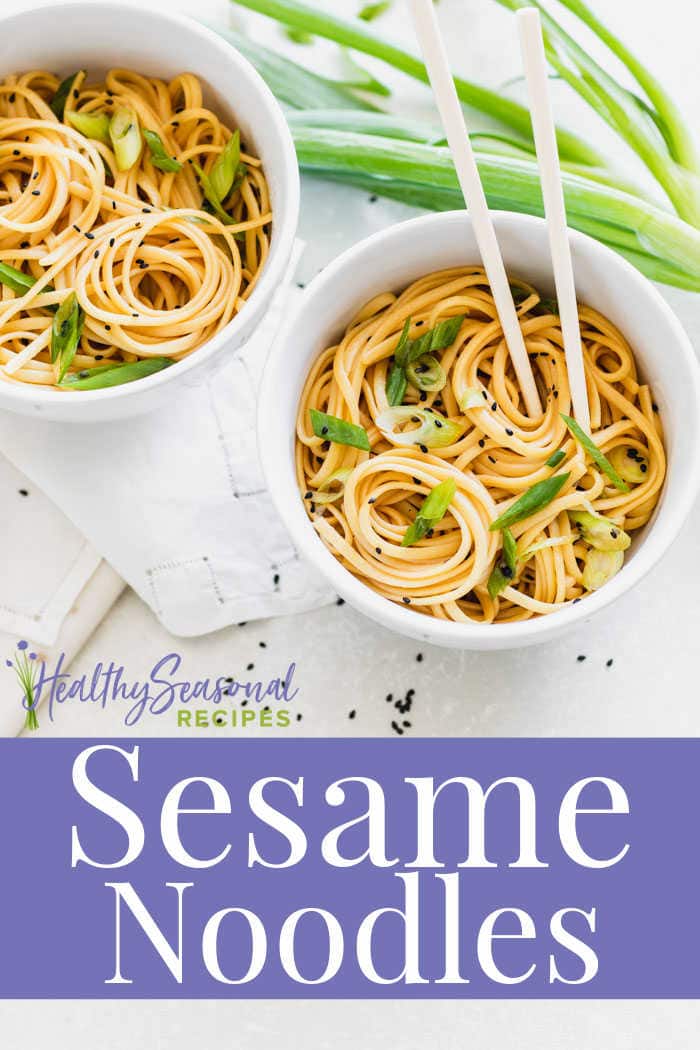 « Previous Posthow to peel and seed tomatoes
Next Post » Ratatouille