A recipe for Chinese 5-spice slow cooker beef stew and making our way out of the darkest weeks of the winter into the middle of February. 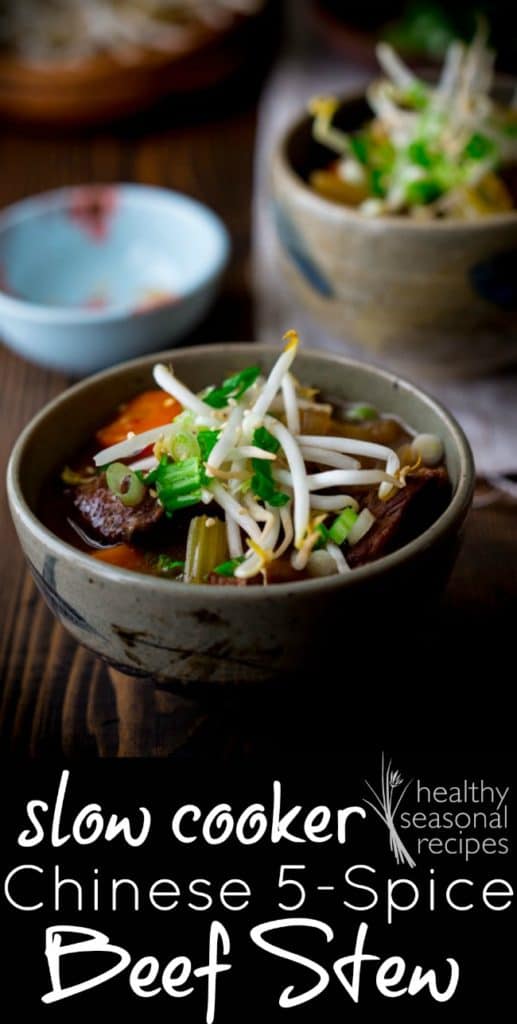 Mid February? How did we end up in mid-February? I still have my Christmas wreaths up on the doors. And I have the electric candles in the window too. I guess I shouldn’t be surprised by this glaring seasonal oversight, since I happen to have this same realization every single year in the middle of February. I think I subconsciously leave the lights and wreaths up to cast a little extra brightness into the darkest weeks of the year. Yeah, that’s it.

No seriously, it is somewhere around the second week of February, at around the time of the girls 100th day of school, and Valentine’s day and Presidents Day. That’s when I start to notice that it is staying light later in the evening. When the end is in sight for the blue bent light days. I promise, this week the lights at are coming down. 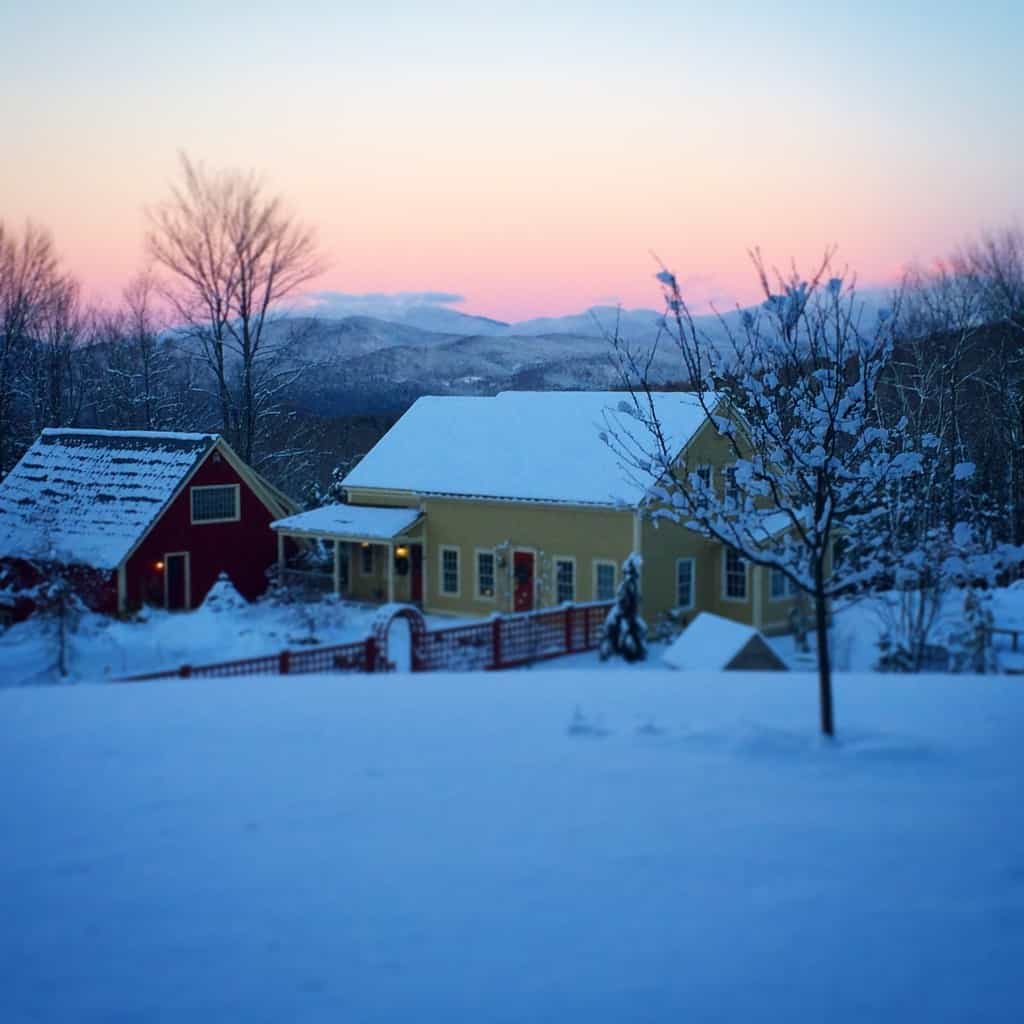 Where I grew up north of Philly, mid-February meant that the thaw was just around the corner. My pond hockey and sledding obsessed dad always wanted as many days of skating, tobogganing, skiing and sledding as possible out of the winter season. So for the Price family, Presidents Day weekend was when my dad would pack us up into the Volvo wagon and drive us to Lake Placid for our annual winter sports vacation.

We’d rent a sprawling house in the residential section of the village of Lake Placid. My parents’ buddies from Vermont and Pennsylvania would come to stay too, and it was a virtual bonanza of Nordic skiing, skating on the Olympic oval, downhill skiing at Ice Face, competing in (and actually winning) the North American Tobogganing Championship, adults and kids building luge tracks in the yard for orange plastic sleds, Mom leading the charge for huge communal meals of lasagna or hearty beef stew and adults drinking a lot of beer and telling bawdy stories late into the evening.

This tradition has fizzled in the last several years. I am not sure why. I think in part it has to do with the fact that my sister and I took the tradition over years ago, but now that we both live in Vermont, we have plenty of winter left here, and feel no need to travel for it. Our pond is frozen solid, there is plenty of snow, and plenty more where that came from. The thaw is a long way off.

The wreaths may stay for a while longer. 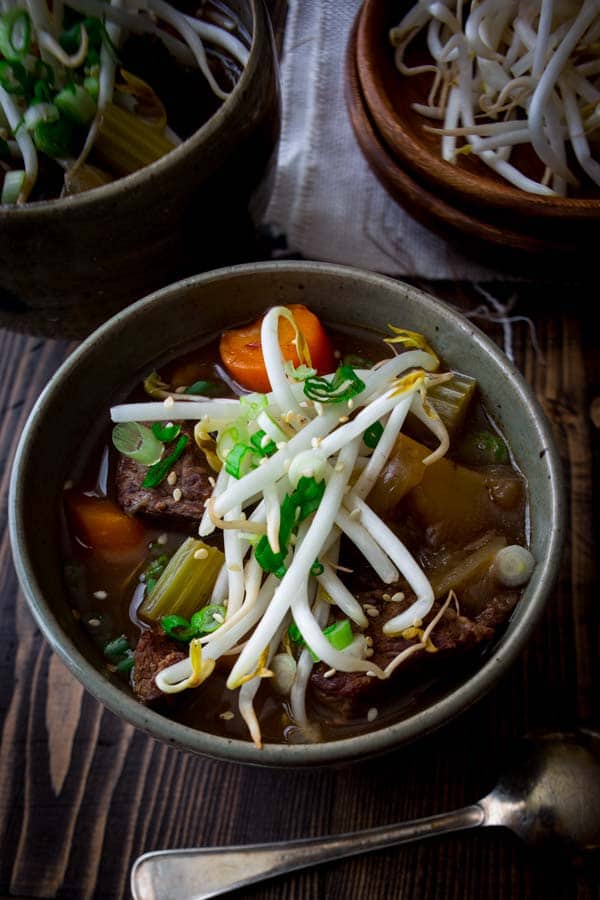 How to Make Beef Stew in a Slow Cooker

Because it’s still chilly up north, I figured now is as good a time as ever to share this super easy, delicious Chinese 5 spice slow cooker beef stew recipe with you all. This is a deceivingly simple beef stew recipe that requires less than 30 minutes of hands-on prep work. You can prep the beef stew in the morning and enjoy it for dinner that same night! Here are the basic steps for how I made this slow cooker beef stew:

1. Sear the beef — Before searing the beef in a skillet, pat it dry with paper towels and sprinkle with salt. Once the beef has been seared, add it to the slow cooker but save the fond left in the pan to flavor the veggies you’re about to sauté.

2. Sauté the onions and mushrooms — In the same skillet, sauté the onions and mushrooms until they begin to brown and soften. Add in the 5-spice powder and stir to coat, then continue cooking until fragrant. Add in some sherry and give the mixture a good stir to loosen up anything stuck to the bottom of the skillet. Add the broth and bring to a simmer before adding the veggies into the slow cooker.

4. Thicken the slow cooker beef stew —30 minutes before the timer goes off, stir ¼ cup cold water and arrowroot in a small dish. Stir arrowroot slurry into the stew, stirring constantly. Cover and allow to finish cooking the remaining 30 minutes. Serve stew in bowls with optional garnishes on top! 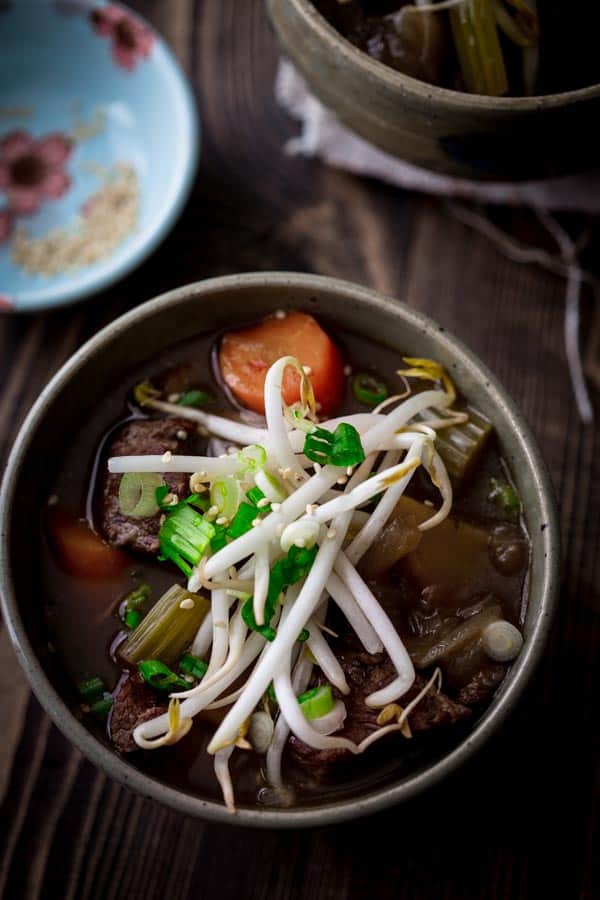 Grass-fed beef has less marbling or intramuscular fat than corn-fed beef, so it can dry out if cooked too long or too hot. It’s best to use the low setting if your slow cooker has two temperatures. That way it will simmer, not boil. Also, searing the meat will help it develop a rich caramel flavor. Make sure your skillet is hot and the meat is dry before searing. If meat was cryovaced and thawed, drain and pat dry with paper towels first.