These 4-ingredient pork and peach kebabs made with teriyaki marinade are super easy and kid-friendly. They are super simple and my daughters gobbled them up. 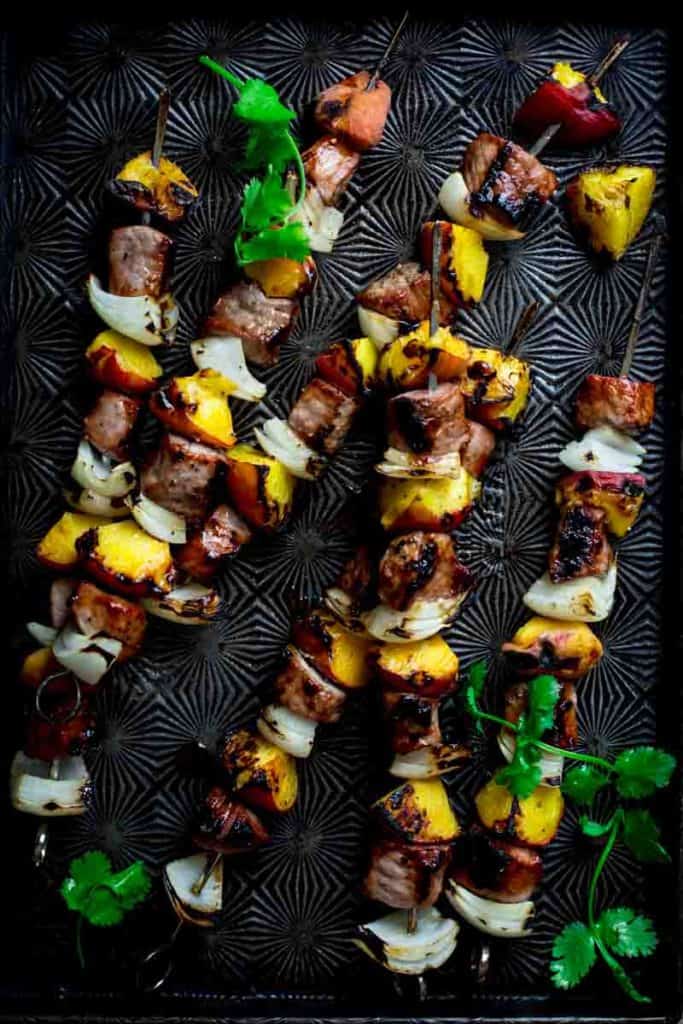 Soooo, I have to confess something to you guys.

I tried doing a Facebook Live last week. Do you know about Facebook Live yet? It’s a live video cast, sort of like Periscope, but on Facebook. Anyway, I’ll just cut to the punchline… it sucked so bad I deleted it after 500 people had been reached. I was just too embarrassed to leave it up. It was like a comedy of errors. Most of which could have come off as charming, if I were to look at it in a nonjudgmental way. Like the fact that you couldn’t see the recipe I was making because it was cropped off at the bottom of the screen. Details. Or that I completely forgot about one of the five ingriendints and had to leave the screen to go get it. Awkward. Or the fact that I had decided to do it so spur of the moment, that I was just wearing my BodyPump clothes and my hair was in a state. How Vermonty. No all of that was kinda okay. Right? I am a real person. Right?

The reason I took it down was because of the part when my friend referred to as “it looked like you just had a stroke for a minute.” I’m not sure exactly what happened, but I just got really nervous all of a sudden. It was like I went back in time to when I was in sixth grade and the much loved school janitor died and I stood up in Meeting For Worship to read something touching to mark the occasion. Then I suddenly discovered that I was super nervous. As I stood there in the COMPLETELY silent meeting house my voice was the only one to be heard… and my legs started shaking so badly I almost fell over. It was just like that but on Facebook Live. Except it was my hands that were shaking! And they were the only thing that wasn’t cropped out of the damn screen. (Face palm!)

All morning, I agonized about it. Should I just keep it up? Let people make fun of me? Is there some way to edit it? Oh gah, what if that guy I dated in college sees that? Or a headhunter for the Chew?

And so I took it down. Buh bye.

And the worst part of it was that I think I felt worse about the whole thing after I removed the video.

So I think the only thing that’s going to make me feel better about the f-ing thing, is to get back on the horse. Do another one of the blasted things. That, and spill my guts to you guys about it. Thank you for listening. I actually feel a little bit better knowing you now know my secret. You and 500 other people on Facebook that is.

Ok, let’s talk about food can we please? 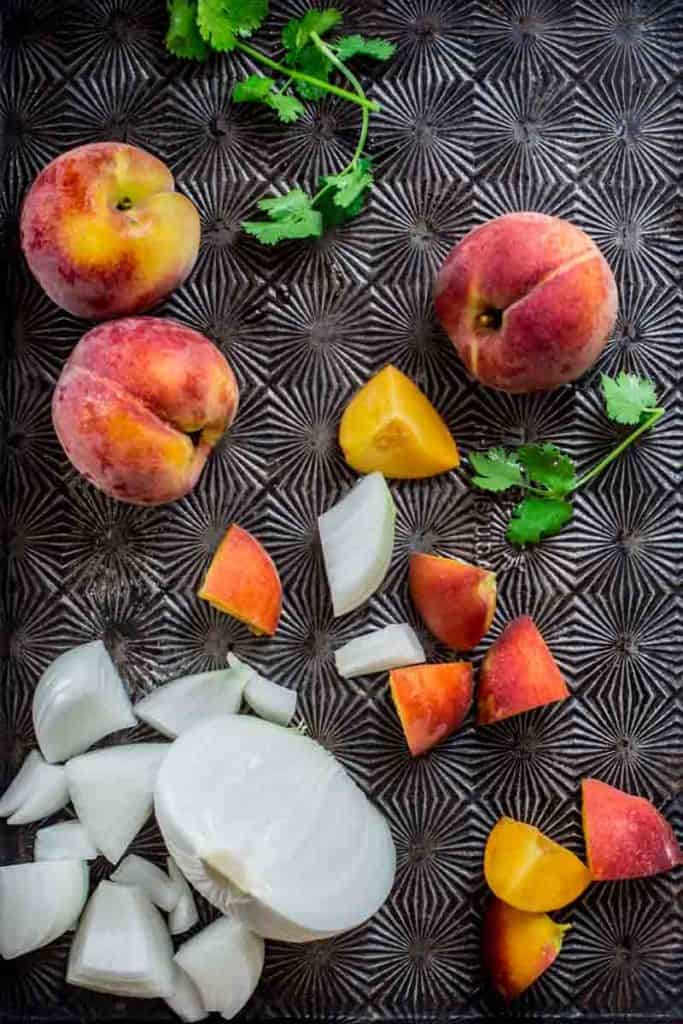 Now that  salad month is in the rear view mirror, I am so excited to catch up with all the other things you have to eat right now! I mean, I love salad, and eat it every day, but there are many other things I’ve been working on that you need to be eating, cooking, baking (and drinking!)

Like what’s for dinner tonight? These kebabs. That’s what. Four ingredients. No dishes (well, except the cutting board and the kebab skewers- but I think most of us can handle that.) They are crazy yummy and so summery. My 7-year old daughter loves them. She cheered when I told her we were having them twice in one week. I think one of the things she loves about them is the fruit, so I’m also looking forward to trying this Cilantro Lime Chicken Salad with Grilled Pineapple by Noshtastic because I’m sure she’ll love it too! 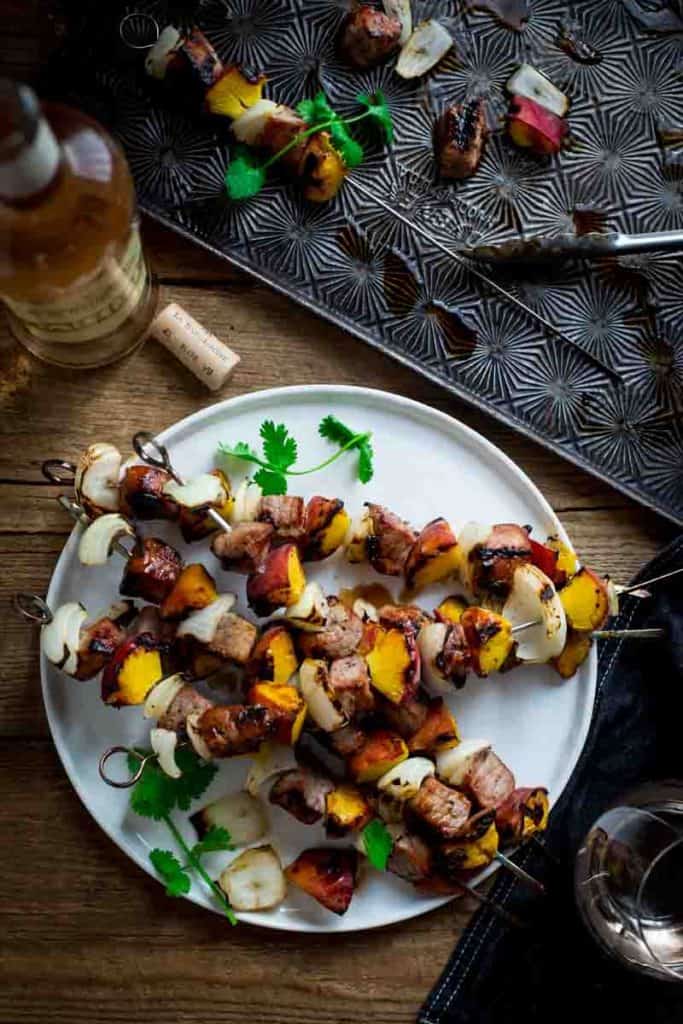 Cooks Notes: I tested these with both pork tenderloin and pork loin. I think they are better with pork tenderloin. The meat is just more, well…. tender. If you are in a hurry, it’s cool to use a bottled teriyaki marinade here. I won’t judge. But making your own is super easy too and my maple teriyaki is gluten-free. Oh, and don’t forget to oil your grill rack! These have a tendency to stick to the grill if you don’t.

Here’s how to oil grill rack: soak a paper towel or clean kitchen rag with organic canola oil or avocado oil. Holding the towel with tongs, rub the towel over the grill-rack, pulling toward you. Do not spray cooking spray on a hot grill (unless you want to lose your eyebrows.) 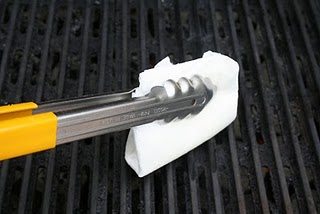 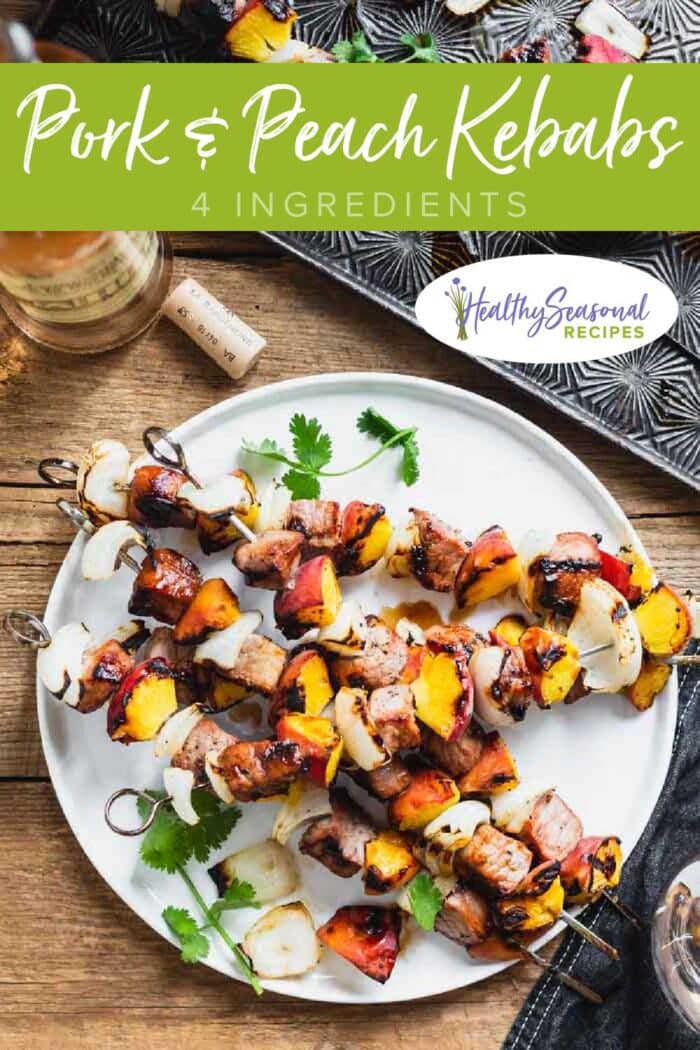