Home » No Index » shredded brussels sprouts with bacon and caraway 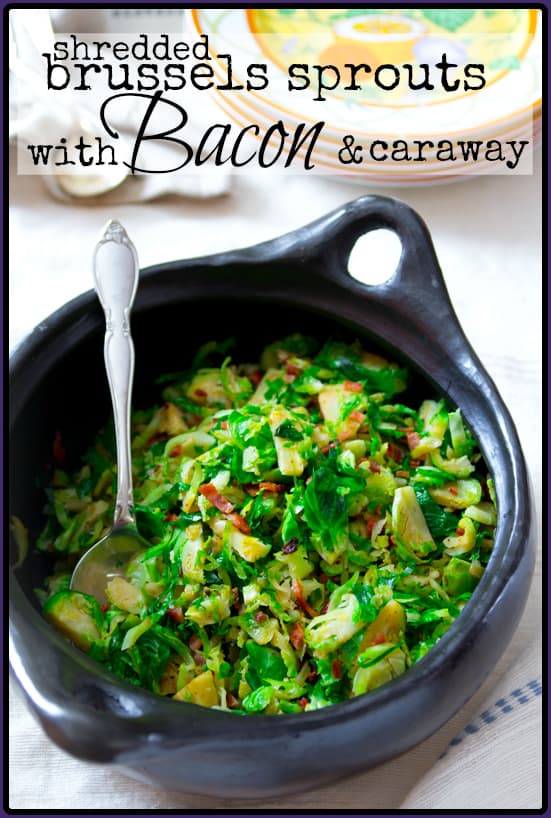 I think Mary Poppins would approve of this Thanksgiving Brussels Sprouts recipe. Like a spoonful of sugar, she would see the wisdom in adding a bit of bacon to help the Brussels go down. I don’t happen to be one of those people who don’t love Brussels. I need nothing more than a drizzle of olive oil and some coarse salt on my Brussels, and I am happy. But I totally get that a lot of people remain to be convinced.

And I am convinced that the way to win them over to the Brussels side of life is with a bit of bacon. [/pullquote] Guess how many calories are in a strip of bacon. The number may surprise you. A strip of cooked bacon only has 40 calories and 3.5 grams of fat. And each strip has so much smoky meaty umami flavor. In this whole recipe, you only need three strips to get plenty of bang for your calorie buck. Also note, in this recipe I poured off the bacon fat from the skillet, but the bacon fond (Yes that is really a word, and my using it clearly puts me in the realm of proud culinerd) remains behind. That way, you’re ditching the calories from the fat but keeping all the flavor it leaves behind.

This recipe also includes caraway, which you’re probably thinking, um, random right? Well it’s not really because caraway is known to aid in digestion which can really help with brassicas. Same deal as sauerkraut. Makes sense since they’ve been doing this in European cuisines forever. I love the way the flavor of the caraway plays with the bacon.

The Brussels in this recipe are shredded. Check out the video above that my 5-year old shot of me shreddin’ it up. She missed some of the action in the first part, ahem, but in the second half you can see how I did it pretty clearly. What do you think of her videography skills? {EDIT NOV 2015- The video is no linger available.}

Anyway shredding the Brussels sprouts means that they cook really fast, and they don’t have a chance to get sulfery. (Okay I’m pretty sure that isn’t a word, but it should be.) You know what I mean though right? I think that’s what a lot of people don’t like; the smell of overcooked Brussels. These on the other hand won’t have a a chance to get over-cooked because they are done in a few minutes. Then the lemon really makes the flavors pop.

8 comments on “shredded brussels sprouts with bacon and caraway”