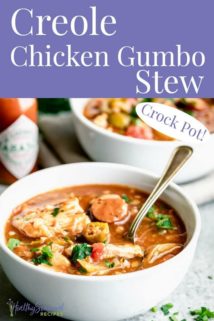 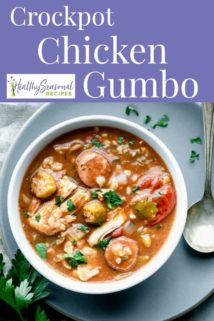 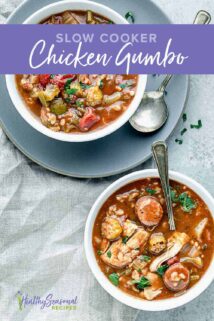 This homemade slow cooker gumbo features chicken, Andouille sausage, okra, and lots of fresh veggies! I’ve added in rice to make it a complete meal in one! It’s easy to set up and turn on before work, so you can have a family meal ready to go when you get home. 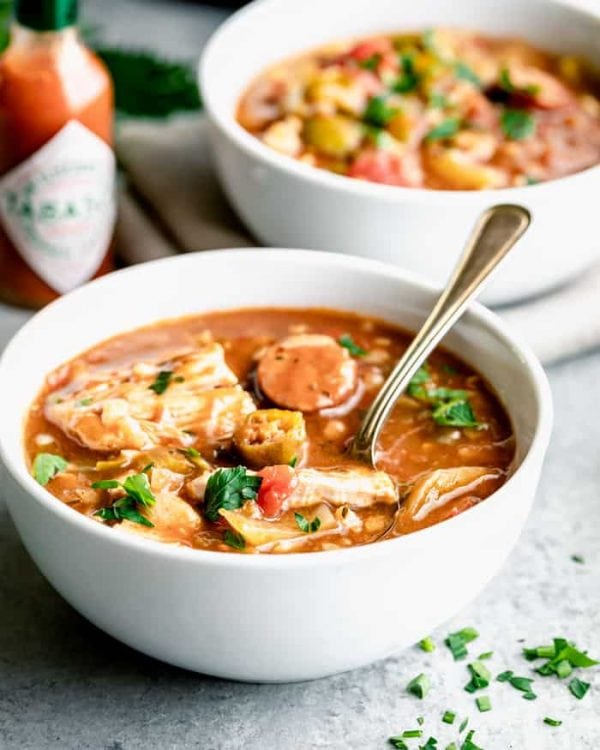 I shared this recipe originally in September of 2012. I have updated the recipe to make it more simple to prepare, and I have added new photographs and a video to share it with you again today.

Holy Hat! I cannot believe that this recipe has been on the blog for seven years! That was so long ago!  A lot has changed since I started this blog, and since I first shared this recipe.

When I first published this recipe (or the original version of it) I loved it so much I put it on the Best of List. But as time went by, and after getting feedback from readers over time, I learned that you all are just as busy as I am. Though we love to cook, we don’t necessarily have tons of time to do it.

Readers told me, “We have a problem, we want to make healthy dinner fast.” That’s when I started sharing easy recipes like steamed cauliflower with herbs or simple sauteed swiss chard. Recipes like that solve that very problem. And what do you know, recipes like that have been the most popular!

This Gumbo, as it was originally published was both too complicated and had way too many ingredients in it. This new gumbo today though is the new and improved Slow Cooker Gumbo. 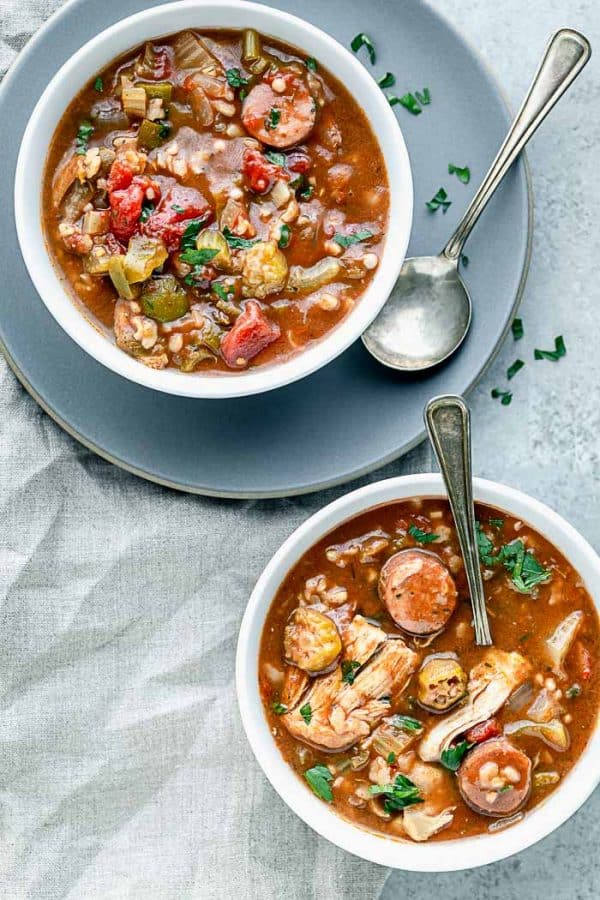 Gumbo is a thick stew that’s most commonly eaten in Southern Louisiana. Gumbo can be made with whatever meat you have on hand, but seafood gumbo, sausage gumbo, and chicken gumbo are the most popular takes on this dish. It should also be noted that gumbo is almost always made with okra and some kind of thickening agent like a roux and also gumbo file powder. 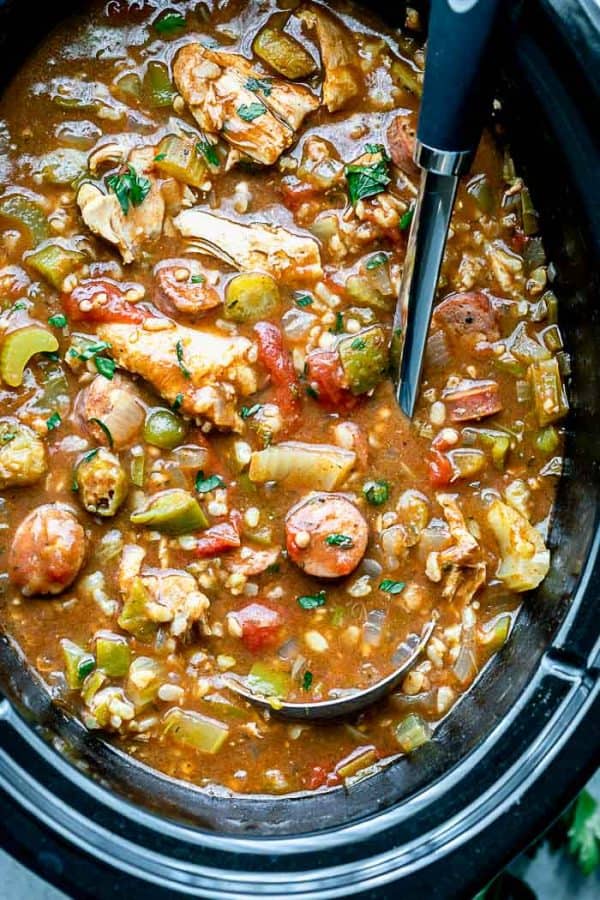 How to Make Slow Cooker Gumbo

To really make the flavor of this slow cooker recipe rich, sear the chicken on the stove top first. It will brown which adds so much additional flavor to the gumbo.

Bulk up the Serving with Vegetables and Rice

When you look at the ingredient list below, it’ll seem like this is a big one, but a lot of the ingredients are spices. I did pair it down for this new 2.0 version of this recipe to just sage, thyme, garlic and salt. I used a whole sprig of rosemary, which adds nice flavor without being overly bossy. Once the gumbo is done cooking, just remove the sprig. 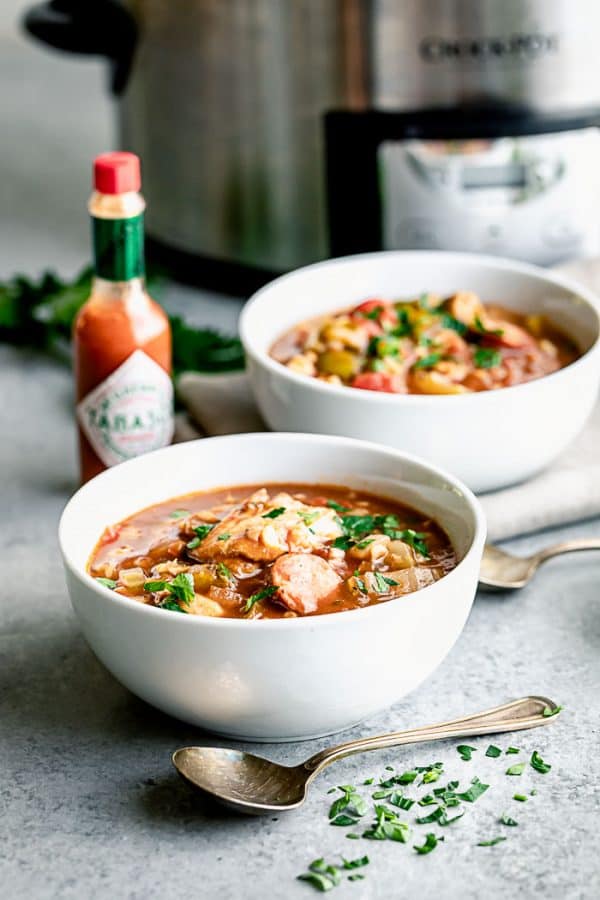 This Slow Cooker Chicken Tortilla Soup is possibly even easier, because there is no searing step!

Slow Cooker Chicken Cacciatore, an all time favorite of mine and readers. If you think you don’t like chicken thighs, I dare you to try this recipe!

Slow Cooker Maple Chipotle Pulled Chicken, I adore the combination of chipotle pepper and maple syrup. You’ll never go back to pulled pork. Okay maybe you will, but you’ll at least also love pulled chicken too!

Slow Cooker Chicken and Okra, totally along the same vein as this recipe here. It’s got a great story to go with it too. 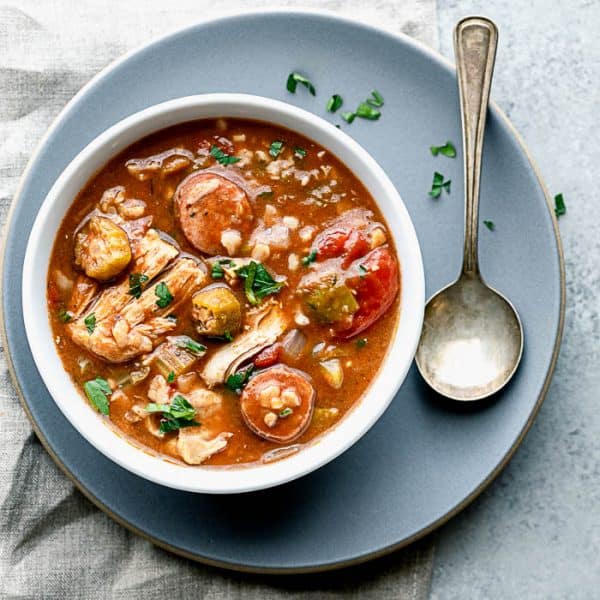 Thanks for reading! If you make this recipe, please make sure to come back and leave a star rating and review! And if you’re new here you may want to sign up for my email list or follow me on facebook to keep up with the latest posts.

1 28-ounce can whole tomatoes, or 3 large tomatoes, peeled and seeded

To peel and seed fresh tomatoes: Bring a large pot of water to a boil. Make an ice bath by filling a large bowl with ice and water. Set aside. Core tomatoes and score an “x” on the bottom. Dip the tomatoes into the boiling water and boil until the skin starts to peel away, but the flesh isn’t mushy, 40 seconds to 2 minutes. Drain tomatoes and transfer to the ice bath to cool. Drain and slip skin off of the cooled tomatoes. Cut in half along the equator. Gently seed tomatoes over a bowl lined with a fine mesh sieve to catch any juices. Roughly chop the tomatoes. You’ll need 2 1/2 cups for this recipe 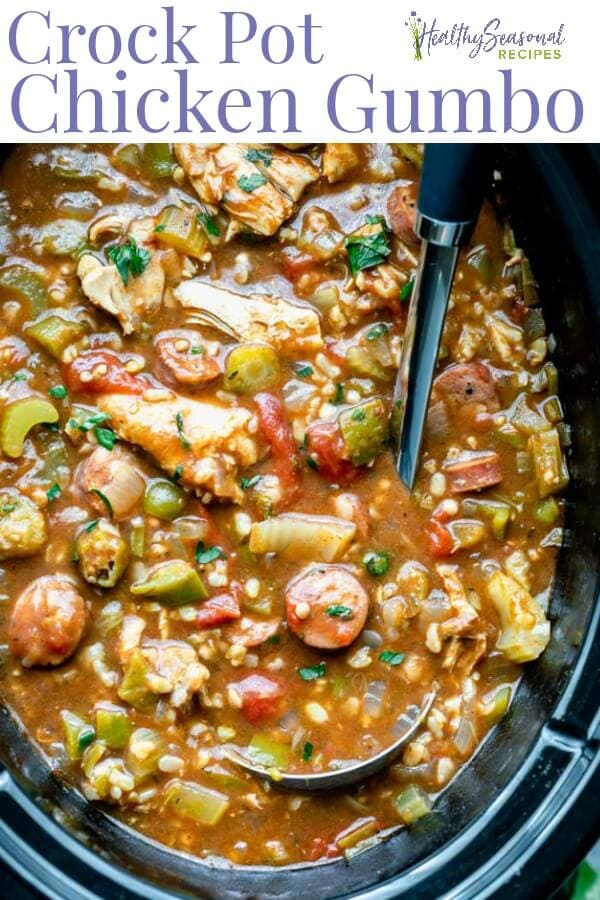