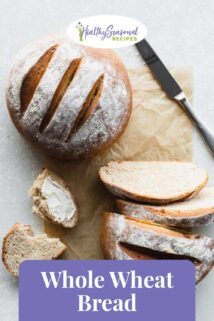 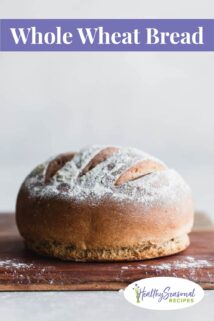 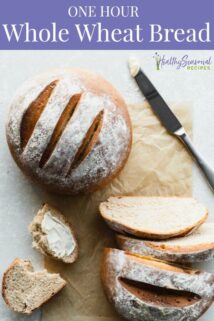 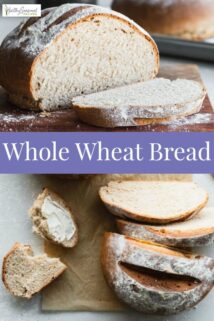 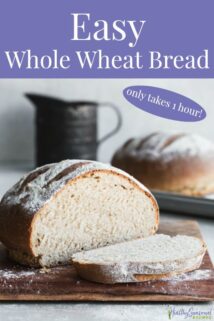 This fast and basic recipe for Whole Wheat Bread has a brilliant technique that allows you to get two gorgeous and delicious loaves on the table in just over an hour… start to finish!  With only 6 ingredients there’s no excuse not to make this nutritious and homemade whole wheat bread.

I have a confession… I love making bread. But I don’t do it often because it takes planning. You really need at least half a day. So when I saw Rebecca Lindamood’s super-fast recipe for homemade Whole Wheat Bread in her new cookbook Ready, Set, Dough!, I was very intrigued. The book is filled with bread recipes, but this one was the one I was most excited to try because I love how quickly this very basic recipe comes together. That’s because the second rise happens in the oven! I was a little skeptical, but I will tell you this trick is seriously genius! 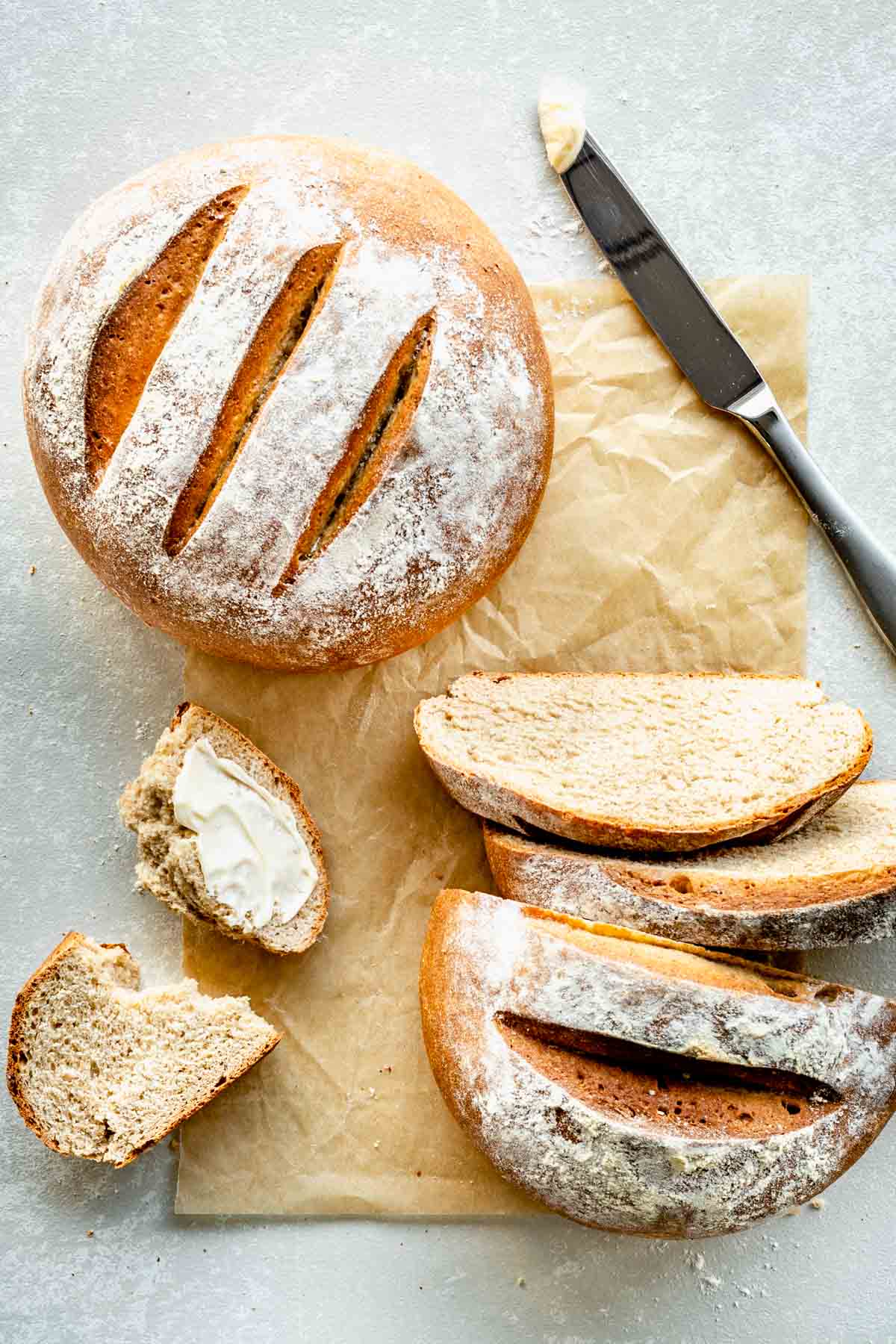 I know making homemade bread can seem daunting, but it’s really just mixing together flour, yeast, water and maybe a few other ingredients and letting the yeast do it’s thing. If you have never attempted to make bread before, this fast Whole Wheat Bread is the recipe to try.

Now let’s talk about the star of the show – Yeast! Most dry yeast is shelf stable because it has been freeze dried into dormancy (but don’t forget to check the expiration date) and sold in small envelopes or jars. Its usually located in the baking aisle of the grocery store near the baking soda and baking powder. Fresh yeast on the other hand is usually wrapped in foil and found in the refrigerator section. 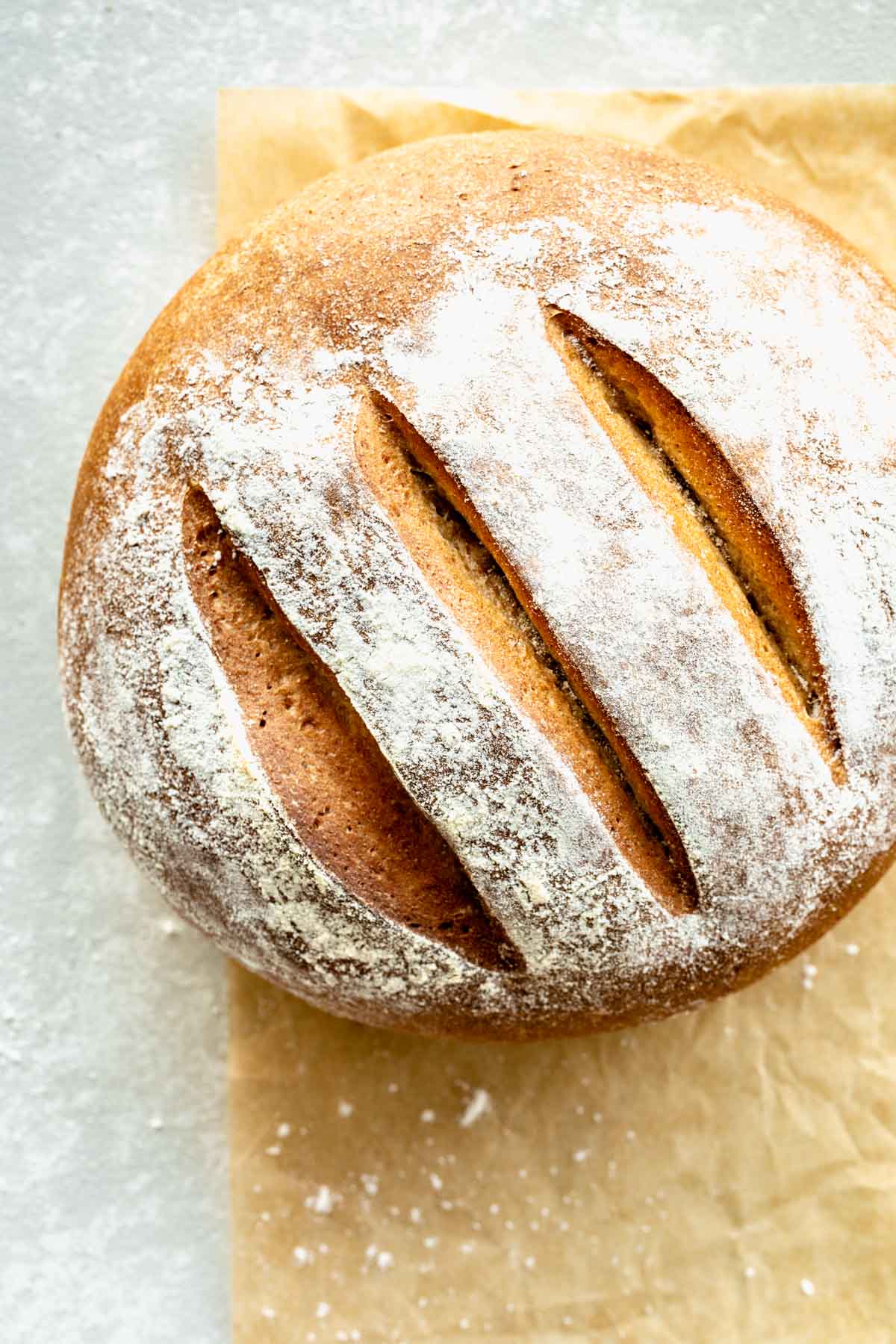 What Are the Different Types of Yeast?

After mixing the dough you have to give the yeast time to do it’s job. This is called proofing the dough and letting it rise. Most recipes require two rise times… the first right after mixing and the second after you shape the dough.

What Does it Mean to Proof Dough?

How Can I Tell When My Dough Has Risen Enough?

Slashing or scoring the dough just before baking is done to allow the bread to expand during baking and take advantage of the oven spring. It also makes it look really pretty. If you bake bread on the regular, you can get really fancy with it.  Check out this awesome post from King Arthur Flour to really get the low down on scoring dough.

Not only is this bread so pretty with the awesome scoring and light dusting of flour on top, it is also absolutely delicious. The whole wheat flour adds wonderful color, flavor and texture. It is perfect for sandwiches, but my favorite way to eat it is to toast it in the morning and slather it with peanut butter and just a little strawberry jam. It literally made me want to get up in the morning!

How Do You Know When The Bread Is Done Baking?

We like to use an instant-read thermometer to check for doneness. This loaf should register between 190 and 200 when it is done.

How Long Does This Bread Last?

Keep this bread at room temperature wrapped in plastic. Soft yeasted breads like this one are best when eaten in the first two days. After that, it is still great toasted. You can freeze it for longer-term storage. Wrap it well and freeze up to one month. Thaw at room temperature and re-heat in the oven

Choosing whole grains over refined counterparts are a smart choice. Diets rich in whole grain foods and other plant foods, and low in saturated fat and cholesterol, may help reduce the risk of heart disease. Additionally, this homemade whole-wheat bread is free of additives, dough conditioners, and additional sugar and sodium.

Please come back and let me know if you try this recipe! We love to hear from you! Don’t forget to leave a star rating and review! Thanks!!

This basic recipe for Whole Wheat Bread has a brilliant technique that allows you to get two gorgeous and delicious loaves on the table in just over an hour… start to finish!  With only 6 ingredients there’s no excuse not to make this fast, nutritious, homemade whole wheat bread.

If using a loaf pan, coat with cooking spray before adding the dough. If you use a baking sheet without parchment, you do not need to spray it, but let the bread cool on the pan for several minutes, or it will stick. After a few minutes it will release. 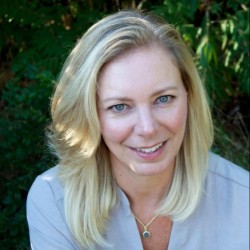 Stephanie Olson worked in television production and advertising before moving from Los Angeles to New England. She attended culinary school in Connecticut and has since worked as a pastry chef, recipe tester and food stylist. Stephanie grew up in Lubbock, Texas and graduated from The University of Texas at Austin. She currently lives in Vermont with her husband and two teenage daughters.