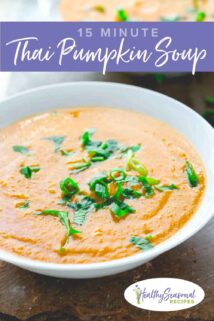 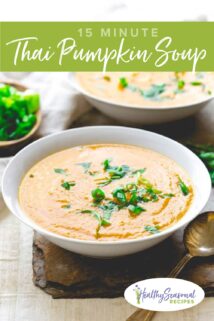 This vegan thai pumpkin soup recipe comes together in 15 minutes—really! Plus, it’s paleo friendly and gluten-free. 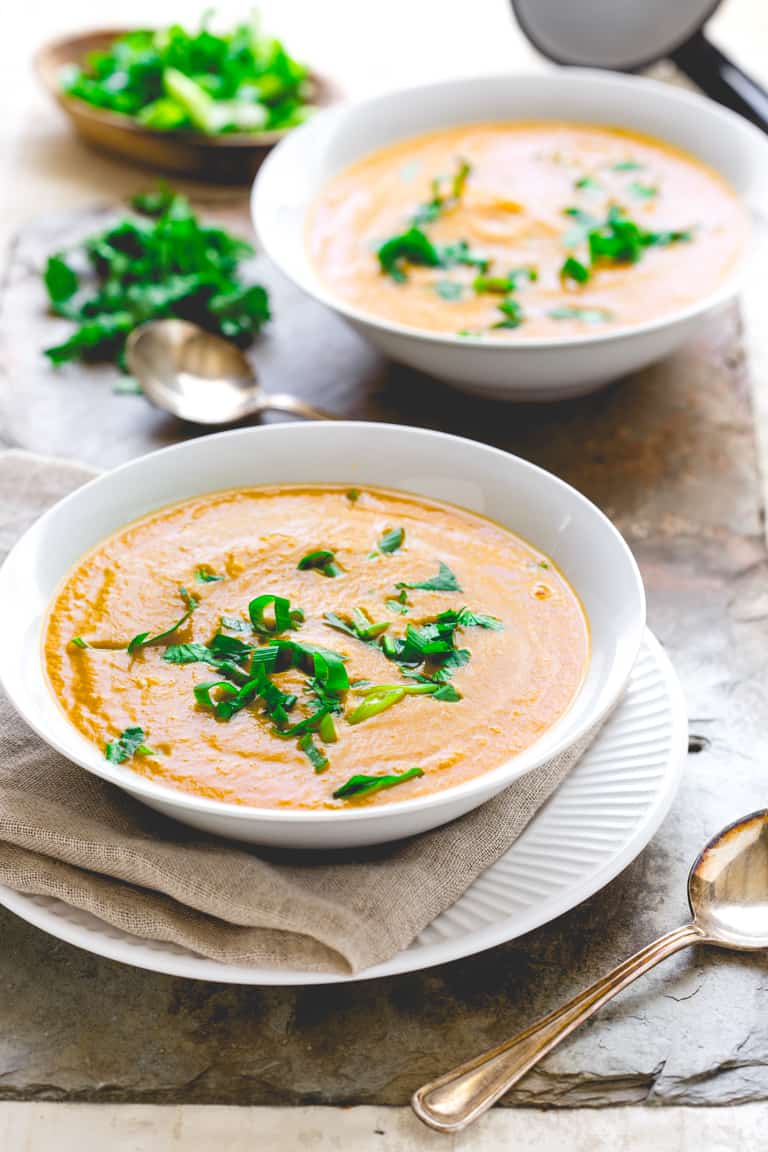 Useful. What a boring word to describe a recipe. I can’t help it though. This Thai Pumpkin Soup recipe is useful. It’s one of those recipes that you need to have so that you can get dinner on the table in 15 minutes. Because life.

I mean, I could have really gone to greater lengths with this pumpkin curry soup. I could have added in some fancy garnishes and swirls of creamy such and such. Or broken apart a pomegranate and sprinkled the arils on top. Heck, I could have even cooked the pumpkin from scratch.

But I set out with one goal when I developed this vegan pumpkin soup recipe. I wanted it to be useful. It’s made from stuff you can keep in your pantry—canned pumpkin, vegetable broth, coconut milk. Even the Thai curry paste, which I admit is kind of a wild card ingredient, is something that you can buy once at any grocery store and then keep in the door of your fridge for the next 40 years and it will only take up 2 cubic inches. And then it will be there for you when you’re ready to make this pumpkin soup again. Which will probably be more often than you think. 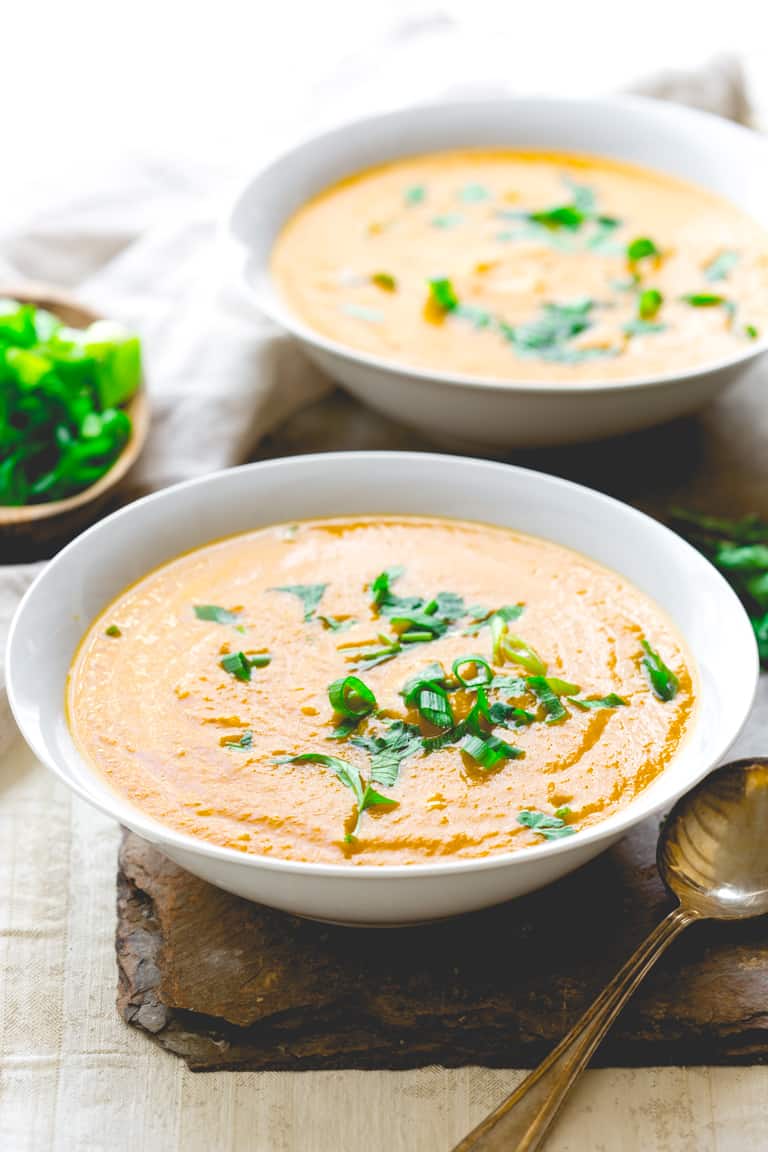 And because it’s not only ready in 15 minutes, and because as far as the taste, that’s where I can use the interesting adjectives!

Enigmatic. Intensely flavorful. Creamy. Sweet and savory. Bomb. (Side-note: someone, who is much younger than me, called one of my recipes on Instagram “Baller” and though I have no idea if that is a compliment or not, I am not sure I am ready to google it. Cringe! Hopefully it is a positive thing.) Delicious! In other words, you’re going to be surprised how yummy this recipe is, with such minimal effort. 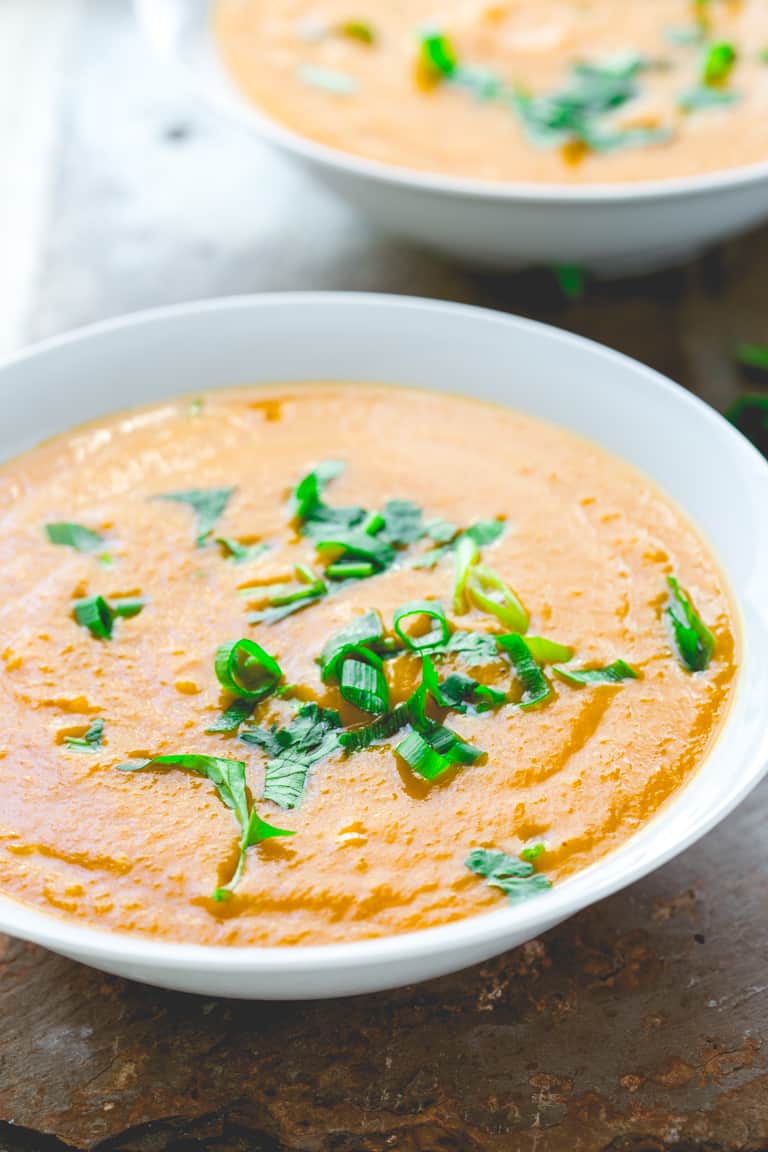 This is a dump and cook type of recipe. Literally all you have to do is dump all the ingredients into a pot and heat until warmed through. You’ll first need to warm some coconut oil in the pot and sauté the minced garlic until it starts to become fragrant (but you don’t want it to brown!). Then add in the curry paste and continue cooking it until it also kicks off some scent.

Immediately add in the broth, then the pumpkin puree (make sure you’re using the unsweetened stuff), coconut milk, maple syrup, and lime juice. Let that warm up on the stove until it starts to simmer. Stir the pumpkin curry soup frequently for about 10 minutes, and then ladle the soup into bowls and enjoy! I garnished my vegan pumpkin soup with chopped cilantro and scallions, but you don’t have to if you don’t have any on hand. 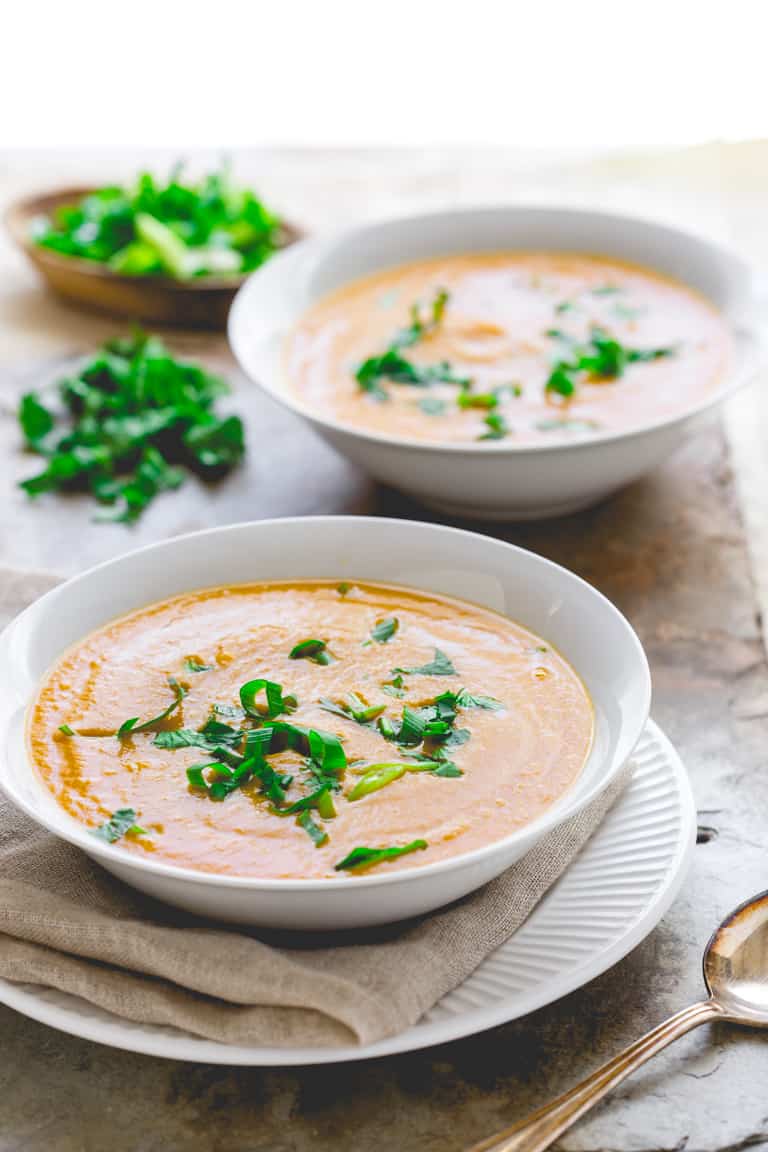 How to Store Pumpkin Curry Soup

This Thai pumpkin soup will keep in the fridge for up to a week, but I doubt it’ll last that long! You can also freeze this soup for up to three months. To do so, I recommend ladling the soup into individual 16-ounce containers so that you can pop the soup into the microwave whenever you’re ready to enjoy it. Just remember to let the soup cool completely before freezing it, because it’ll expand in the containers as it cools.

Please let me know if you try this recipe by coming back and leaving a comment below. Or give a shout on social media. I’m always on Instagram, so if you tag me @healthyseasonal I’ll be sure to see what you’ve been cooking up!

This Thai Pumpkin Curry Soup recipe is useful. It’s one of those recipes that you need to have so that you can get a yummy weeknight dinner on the table in 15 minutes during this crazy Fall season. Bonus that it’s vegan, too! 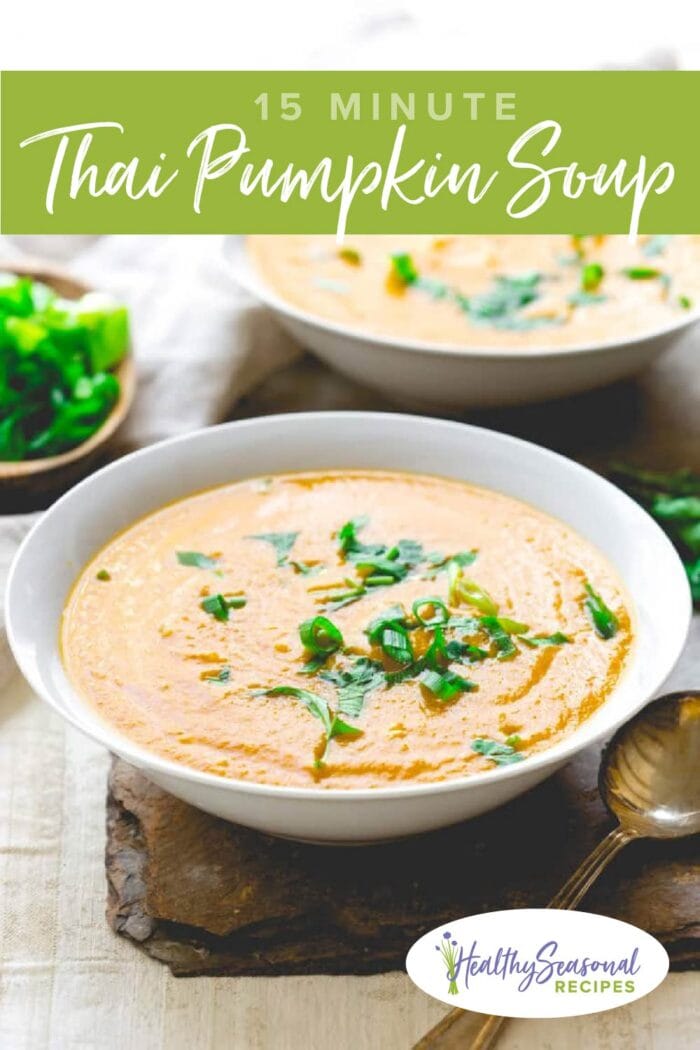 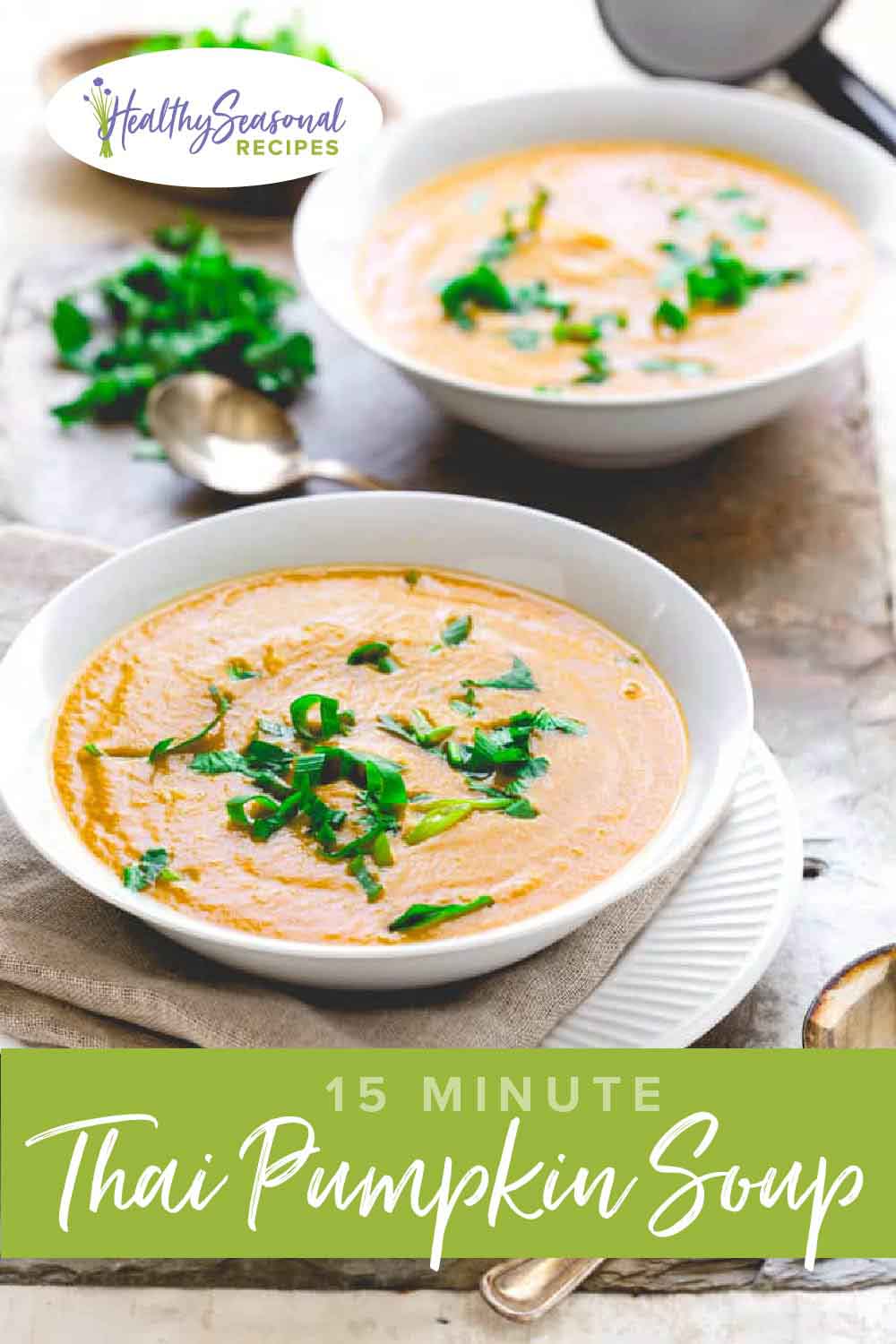