Here is a 30-minute, primal friendly, low-carb version of Spaghetti Amatriciana, made with spaghetti squash instead of pasta and bacon in the Amatriciana sauce instead of Guanciale. And I have a Great Big Bacon Giveaway! 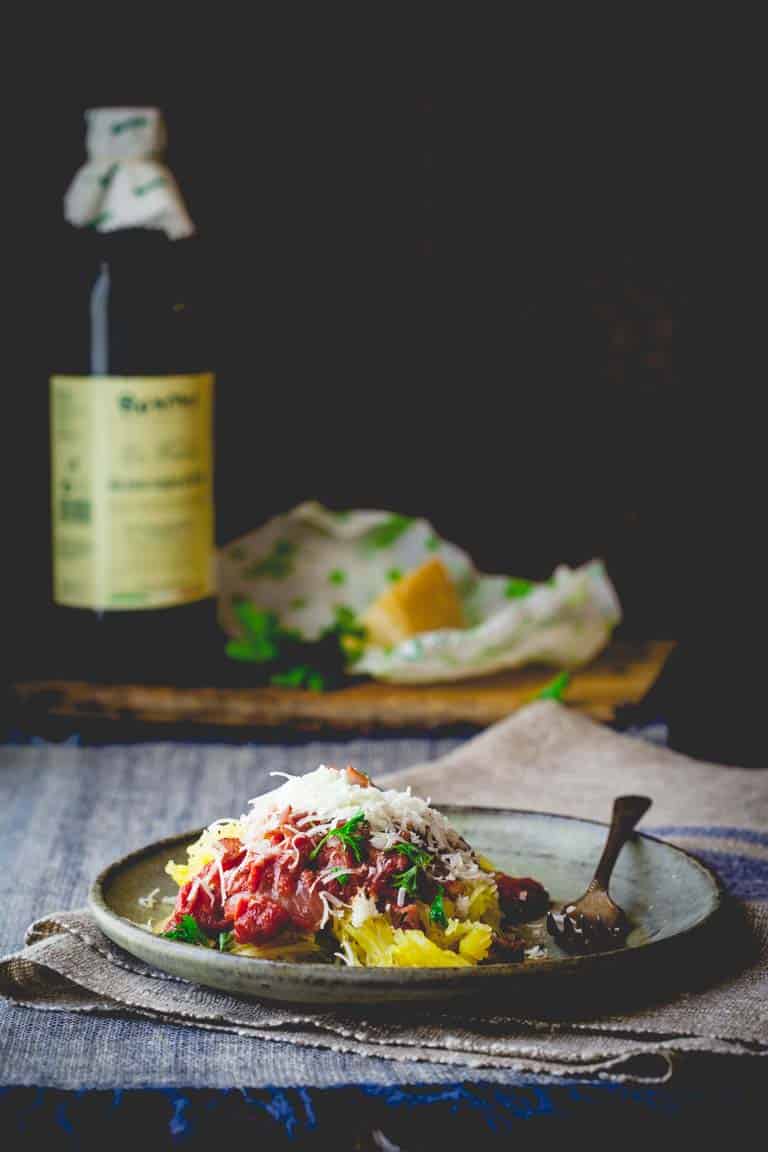 When we were in Italy last month, it was my younger daughter that ordered the best dish at every restaurant. Every meal we would try each other’s food and come to the conclusion that she had ordered the best meal out of all of us.

The funny thing is that she always ordered the most simple, basic recipes, yet they always seemed to be the most delightful. The Bucatini Amatriciana she had on our first night in Florence was unforgettable. It blew us away in its flavorful simplicity. The rich slow cooked and salty pork flavor, the hit of hot pepper, the thick tomato sauce cooked right into the al dente noodles. The sharp Pecornio! Mmmm! 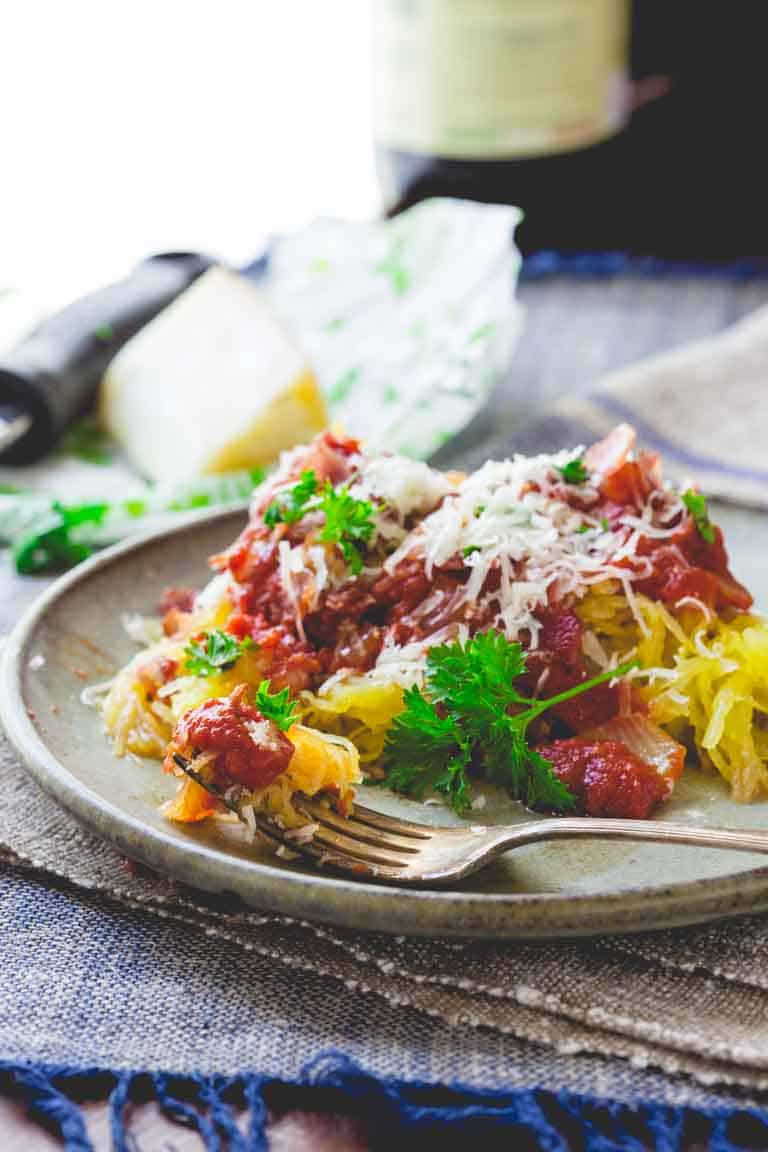 When I got home from our trip and was thinking ahead to the fall and the recipes I wanted to share here, I kept thinking about that Amatriciana in Florence. I decided it would be a fun twist to serve the sauce with spaghetti squash instead of pasta.

So to keep it simple and doable for a weeknight meal, I cooked the spaghetti squash in the microwave and made the sauce while that cooked. The whole thing came together in only 30 mintues. I also wanted to make sure that you wouldn’t have to make a trip to Eataly to make this, so instead of calling for the traditional Italian cured pork cheeks (Guanciale) that’s typically in Amatriciana, I used some American-style bacon. Vermont bacon, actually. 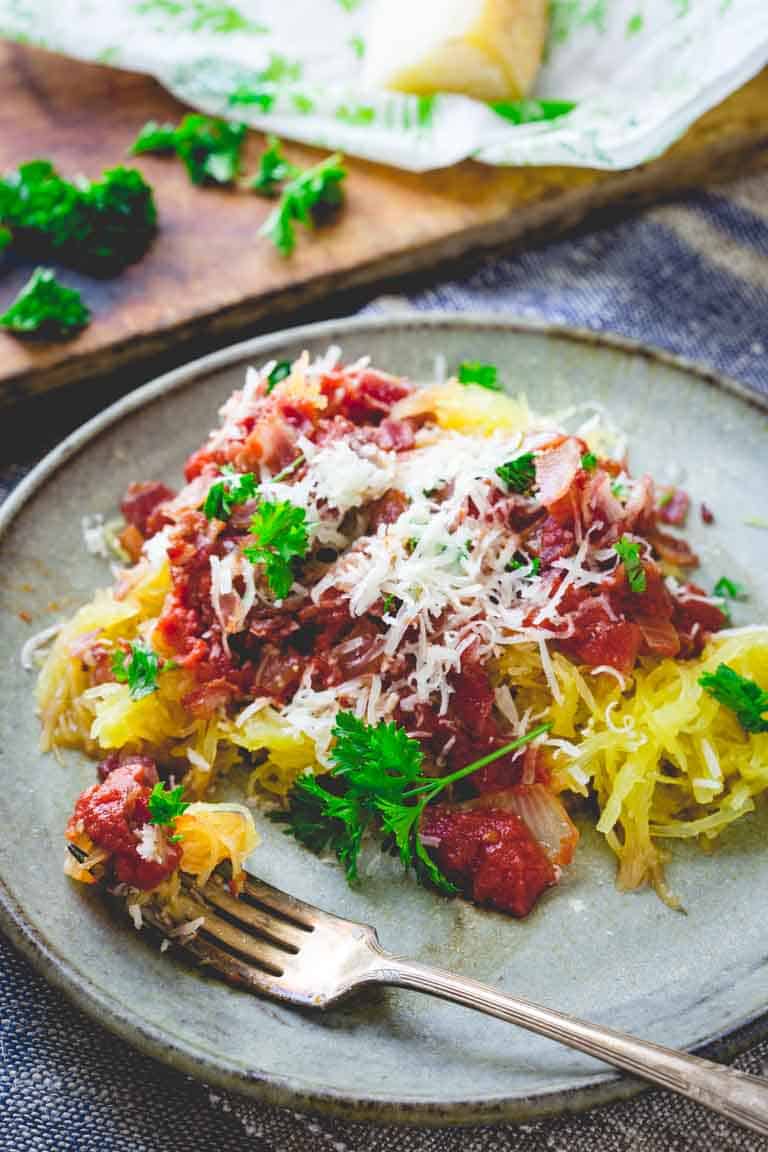 How to Make Spaghetti Amatriciana

Making Amatriciana sauce is deceptively simple—don’t let the bold flavors fool you into thinking otherwise! To make the sauce, first dice the Vermont bacon and place it into a skillet. Pop the skillet onto the stove over medium heat and fry until it’s browed and crispy. (You want to add the bacon to a cold skillet so that the fat renders off during the cooking process and coats the pan. This prevents the bacon from sticking to it!).

Once browned, remove the bacon from the skillet with a slotted spoon and put it on a paper towel-lined plate. Drain the bacon fat from the pan and add in olive oil and red pepper flakes. Cook until fragrant, and then throw in the onion and cook until softened (your kitchen is going to smell amazing!). Stir in a can of tomatoes and let the mixture simmer until slightly thickened, which will take around five minutes.

Once the spaghetti squash is finished, spoon the spicy Amatriciana sauce onto it and sprinkle with cheese. 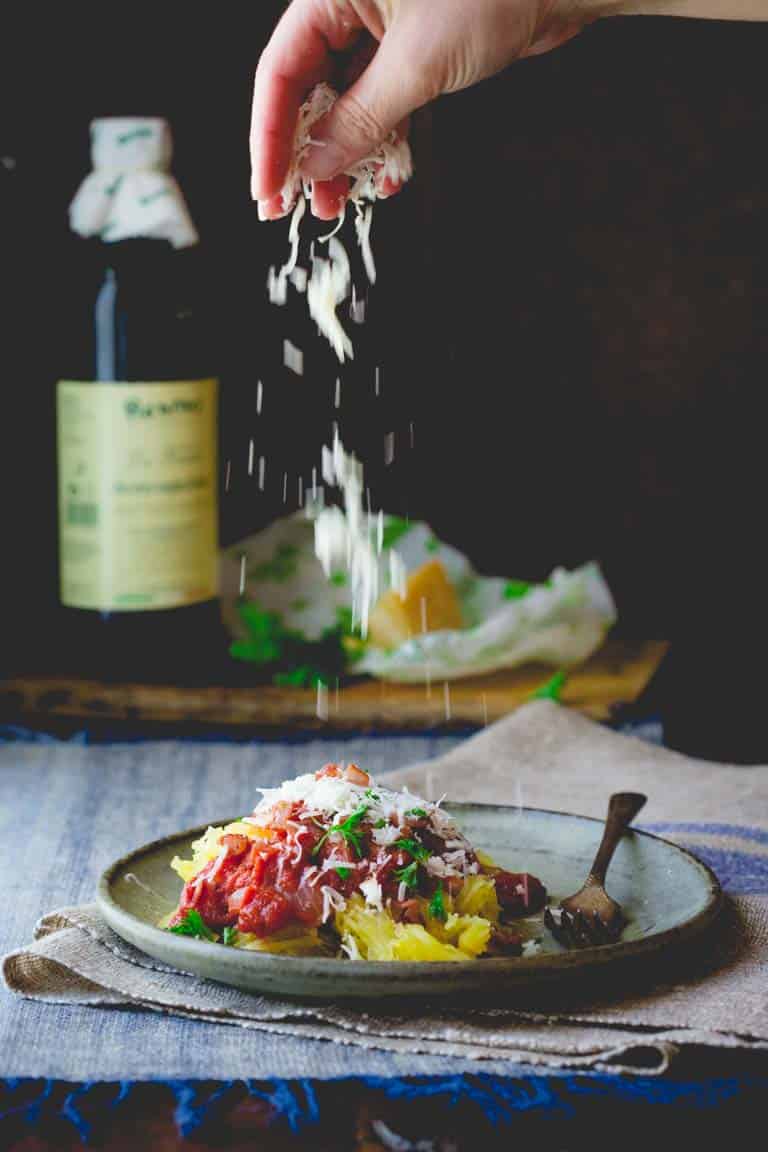 And speaking of Vermont Bacon… I have some for you! Like a giant box of it, and summer sausage and pepperoni and meat sticks!! Yeah giveaway time! Thank goodness you can’t see me embarrassing myself on the other side of the screen doin’ the meatstick dance! Check out the details for the giveaway below, prize provided by my buddies at Vermont Smoke & Cure! I heart them! Check ’em out on FB and Instagram.

The prize is valued at $100 and includes 4 packages of uncured Vermont Smoke & Cure Bacon (2 of each flavor), 2 uncured summer sausages, 2 uncured smoked pepperoni and 2 boxes of meat sticks. All of which is made with meat that is raised without antibiotics or added hormones.
a Rafflecopter giveaway 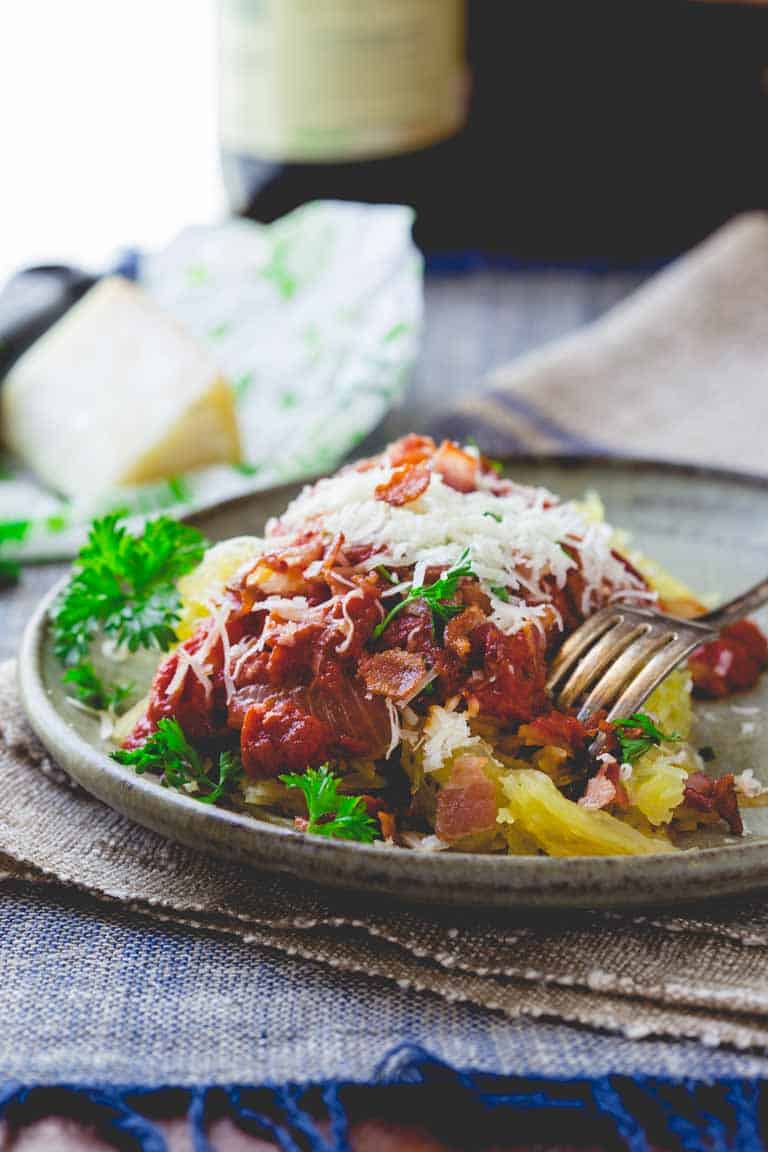 Do you always try what everyone else orders at restaurants?

Have you had Amatriciana sauce before?

What would you do with the bacon in this prize pack?

Bucatini all amatriciana on Cravings of a Lunatic

This spaghetti squash with amatriciana sauce is a 30-minute version of Spaghetti Amatriciana. This recipe is paleo and low-carb!