Here is a 30-minute, primal-friendly, low-carb version of Spaghetti Amatriciana, made with spaghetti squash instead of pasta.

The Bucatini Amatriciana we had on a recent trip to Italy was unforgettable. It blew us away with its flavorful simplicity. The rich slow cooked and salty pork flavor, the hit of hot pepper, the thick tomato sauce cooked right into the al dente noodles. The sharp Pecornio! Total perfection!

Today, I decided it would be a fun twist to serve the sauce with spaghetti squash instead of pasta. 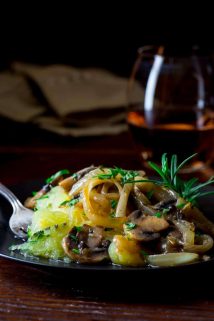 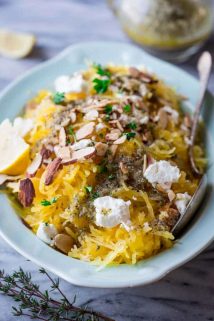 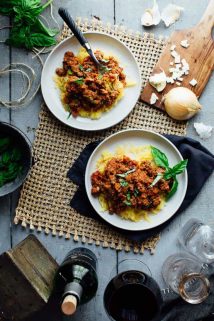 How to Make This Spaghetti Squash with Amatriciana Sauce

Place the spaghetti squash in a 9×11-inch baking dish, cut side down. Pour one cup of water into the pan. Cover with a layer of parchment or wax paper. Cover with plastic wrap.

Microwave until the spaghetti squash pulls apart into tender threads when tested with a fork, 16 to 20 minutes.

Meanwhile, place bacon in a large skillet and set over medium heat. Cook, stirring often until the bacon is browned and crispy, 6 to 8 minutes. Remove the bacon from the skillet with a slotted spoon and transfer it to a paper towel-lined plate. Pour the fat off into a dish or can.

Return the skillet to medium heat, and add oil and red pepper flake. Heat for about 20 seconds. Add onion, and stir to coat with the oil and pepper flake. Continue cooking, stirring occasionally, until the onion is softened and starting to brown, 5 to 7 minutes.

Add tomatoes and salt and bring to a simmer, stirring often. Simmer until the sauce has thickened slightly, about 5 minutes.

When the squash is tender, carefully remove the cover, and transfer the squash to a cutting board with tongs. Scrape spaghetti squash out of the shell with the forks. Add the squash and the reserved bacon to the sauce and simmer for one minute.

Serve the spaghetti squash topped with pecorino and parsley.

Can this sauce be used with other types of “pasta”?

Yes absolutely. If you want the sauce but not the spaghetti squash, you could add regular wheat pasta or zucchini noodles instead.

What’s the right way to cook bacon in a skillet?

You want to add the bacon to a cold skillet so that the fat renders off during the cooking process and coats the pan. This prevents the bacon from sticking to it! Also, remember not to overcrowd the skillet as it will prevent even browning.

Can this recipe be made ahead?

The sauce can be made a day in advance and stored in an airtight container until ready to use. The squash can also be roasted a day in advance. Once ready to serve, combine the sauce and scraped out spaghetti squash in the skillet and simmer to heat.

How do I store this dish?

You can store this spaghetti squash recipe in an airtight container in the fridge. It’ll stay good for 3 to 4 days.

What other sauces go with spaghetti squash?

This spaghetti squash with amatriciana sauce is a 30-minute version of Spaghetti Amatriciana. This recipe is paleo and low-carb!

Cooking Tip: You want to add the bacon to a cold skillet so that the fat renders off during the cooking process and coats the pan. This prevents the bacon from sticking to it! Also remember not to overcrowd the skillet as it will prevent even browning.