Here is a yummy and satisfying black bean soup recipe inspired by the soup my mom used to make when I was a little girl. It has tons of smoky flavor from smoked ham hocks and a drizzle of vinegar floated on top for a bright contrasting element. 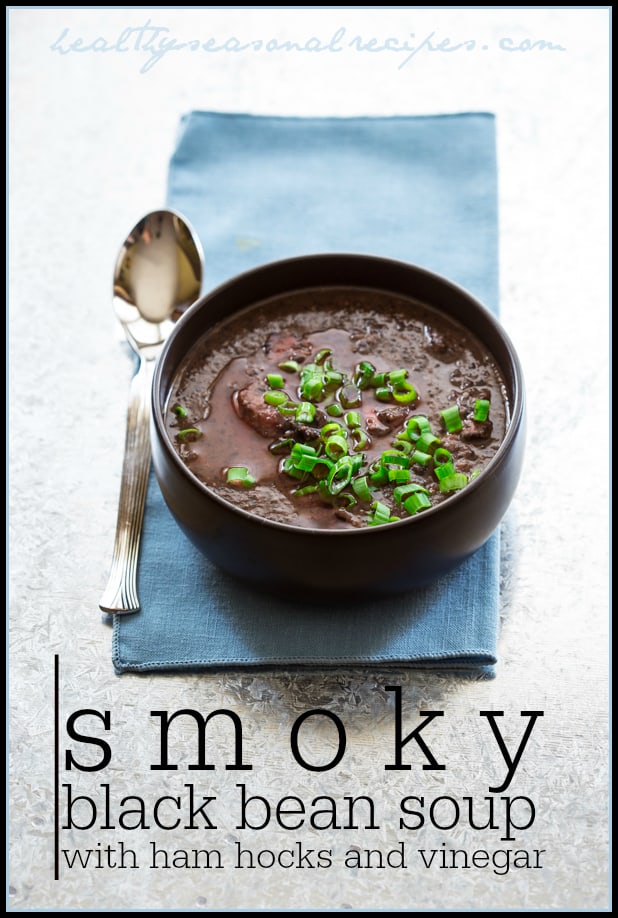 We got a big bag of dried black beans in our locavore share from our CSA a few weeks ago, and so I knew it was time to make a batch of my moms black bean soup recipe to share with you.

This isn’t her official recipe, but it is inspired by her recipe. Like hers, I cooked the beans with smoky ham hocks, onions and garlic until they were super soft and falling apart. Then I fished out the ham hocks, removed the bone and fat and then shredded up the ham. I pureed the soup and then stirred the ham back in. But here is the thing I want to tell you about. The best part. The most important thing! It’s the vinegar! Vinegar I say! My mom is perhaps the coolest person ever for raising me to believe that the only way to enjoy black bean soup is drizzled with vinegar.

I asked her yesterday where she got the idea to drizzle vinegar on top of black bean soup in the first palce. I googled it and didn’t really find anything. I wasn’t sure if it was a thing or if she had made it up. She said she got her original recipe for black bean soup from her good friend Carol, who had learned how to make it from her Spanish mother in law. That was my mom’s base recipe. Then her other friend Meredith taught her about floating a drizzle of Maderia on top. Mmm, I like the sound of that, though I don’t remember that. 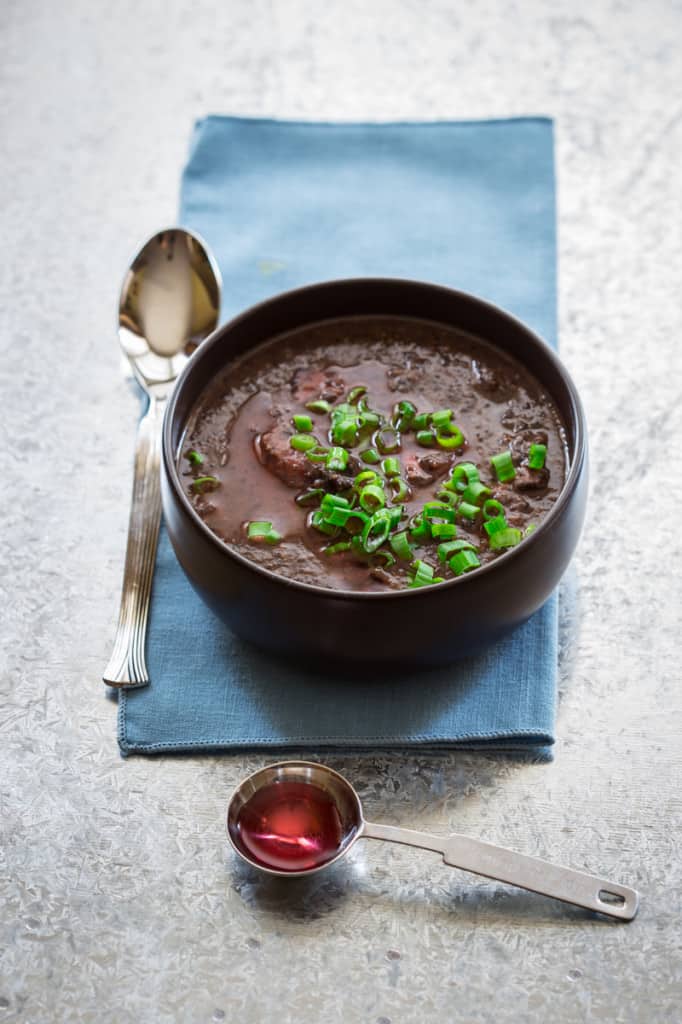 But she went on to explain that she couldn’t remember exactly but she thinks she really got the idea while on a trip to Spain with my Dad back in the 80’s. She said that she seems to remember that when she was there the Spaniards were into drizzling olive oil and vinegar on top of bean soup, and she just loved it. So that’s what she started to do with her recipe at home. What ever the origin, this is the bean soup I remember eating as a kid. And it rocks!

Thinking about the fact that this soup just wouldn’t be the same without the vinegar got me thinking about sour and salt. I know. I know. I went off about it (and offended half of the planet) in my guacamole post, but I am going to say it again. Sour and salt balance each other. If you add one you have to add the other to balance it. In this recipe the ham and the salt are balanced by the vinegar. The vinegar adds brightness and perks the whole thing up. Without it, the whole soup would be a little flat.

And that’s the thing, you can take that same principle and apply it to all your cooking. Ok, not all, but a heck of a lot of recipes! And the best thing about salt and sour are that you can add these tastes to recipes without any calories. So if you are making a recipe and you think it needs a little something, before adding butter or fat to it, try adding a pinch of salt and a splash of acid. You may be surprised to find that the whole recipe will be transformed. That’s all I am saying. The Spaniards have been doing it forever. Or at least my mom has been doing it since the 80’s.

Question: Have you ever had bean soup with vinegar?

A healthy and filling black bean soup recipe with smoky flavor from ham hocks and a drizzle of vinegar on top for a bright contrasting taste to balance it.