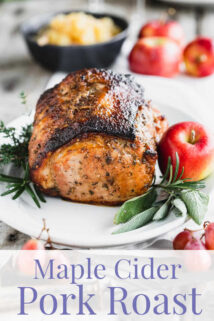 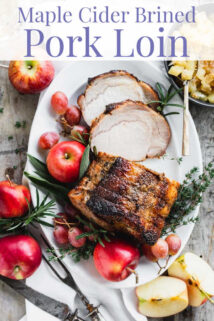 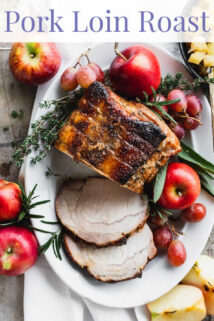 This Maple Cider Brined Roasted Pork Loin recipe is all that and then some. This is a pull-out-all-the-stops kind of recipe for a special meal! I have 100% confidence you’re going to love it!

If you have been looking for a Christmas dinner or holiday roast that serves four to six people, stop your search and feast your eyes on this Maple and Apple Cider Brined Pork Roast.

It is brined in apple cider, maple syrup, cinnamon and seasoning. Then it is rubbed with a simple butter, mustard and maple mixture that creates an irresistible browned crust on the roast. It is served with a delicious homemade apple chutney made with mustard seed, apple cider vinegar and pure maple syrup.

Pork loin is notably lean and can be very dry if not prepared with care. I have four tips to share with you to help prevent drying it out.

Brining is a technique, somewhat similar to marinating, that involves soaking meat or poultry in a salty liquid for several hours before cooking.

The process, unlike marinating which requires acidity, relies on the high sodium concentration in the brine to force osmosis of the liquid and seasoning to penetrate into the meat cell walls. Where marinating effects the outer layers of meat, brined meat will be juicy and seasoned throughout to make it hold more moisture and flavor.

Some brines are simply water and salt. Many also include sugars of some sort. This one today goes a bit further by adding in flavor (not just salty and sweet taste) in the form of cinnamon, apple cider, maple and bay leaf.

In culinary school I learned about a technique called barding, which if you’ve ever had a bacon-wrapped scallop, you’ve experienced first-hand. Basically barding is wrapping lean meat with fatty meat (like bacon) to sort of “baste” it with fat as it cooks. This helps to keep the meat moist and helps keep it from drying out.

Today I took that basic principal and made a butter rub which essentially does the same thing– it bastes the roast as it cooks. It has maple sugar, mustard and rosemary in it to give it extra flavor too.

Tip 3: Use An Instant Read Thermometer

When you cook pork, it is really hard to know it is done and having tested this recipe a bazillion times, I can tell you that you can’t go from the timing alone. Depending on the side of the loin your roast is cut from, the range of cooking time can vary by 15 minutes!

To test the internal temperature, you’ll want to insert the sensor of your thermometer into the center of the roast. Test it in several spots and use the lowest number for your reading.

It should be 125 degrees F when you take it out. As it rests, the temperature will continue to rise. As you see in my photos and video there is only the slightest hint of pink in the center of the roast. Note: the USDA says to roast it to 145 degrees before taking it out of the oven. This will result in a much dryer roast, but if you have safety concerns or health issues, please follow their guidance.

This sounds trivial, but it is so important! Rest the roast for at least 15 minutes before you slice it. Why? When you first take the pork loin roast out of the oven, the meat proteins are wound tight and seizing. Letting the roast rest will give the meat proteins time to relax a bit. If you slice it too soon, the juices will just pour right out of the meat onto the carving board.

This recipe uses a 2 pound boneless pork loin roast. Look for one in the meat case, or ask your butcher to cut it for you.

Look for a fat cap of 1/4 inch thick or less. You will need to tie it with string, so if yours comes tied, that will save you a step.

Pork loin is not the same thing as pork tenderloin. Pork loin comes from the loin (back) of the pig. That’s the “primal” that runs along the back of the animal between the shoulders and hind leg.

Moden pork is raised to be very lean, so the meat of pork loin roasts are very lean. It is often sold with a “fat cap” of up to 1/4-thick.

Pork tenderloin also comes from the loin primal, but it is a much smaller cut. The tenderloin is made up of the psoas major and minor and iliacus muscles. {In a human that translates to our hip flexors for all of you anatomy buffs.}

To visualize it, this muscle runs along the rib on the ham (tail) end of the pork. It doesn’t do much heavy work, which is why it is so tender.

Tenderloin doesn’t have any external fat on it because it is an internal cut, but it may have silver skin which can be removed. If you want to try a recipe similar to this one, but you happen to have purchased a pork tenderloin, I recommend this Easy Roasted Pork Tenderloin and Apple Skillet instead. It has a lot of the same flavors but is taylor made for tenderloin.

Use kitchen twine to tie the loin, in about four places, along the length of the roast. The ties will serve to tighten the meat from a flattened loaf-shape into a more circular cylinder shape. This will help the meat cook more evenly.

The chutney is a simple cooked sauce made with diced apples. It can be served warm or room temperature. For convenience it can be made two days ahead, and rewarmed (or brought to room temperature) before serving. Here’s how to make it:

Once you’ve brined the pork, you’re ready to roast it. Before it goes into the oven, you’ll want to add on the maple butter. Here’s how to make it:

Transfer the pork to a carving board or platter. Tent the roast with foil and let rest for 15 minutes. The carryover heat will cause the pork to continue cooking as it rests.

Remove the butchers twine before slicing. I just cut each piece with scissors and pull them off.

Slice the pork into thin slices. Serve with the warm chutney. 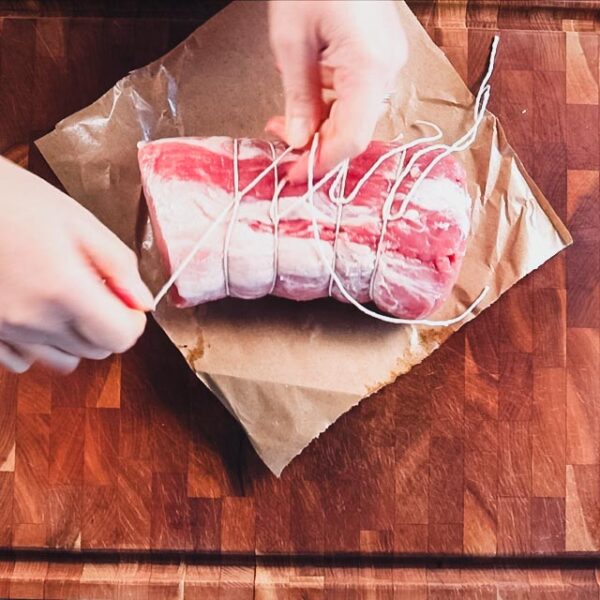 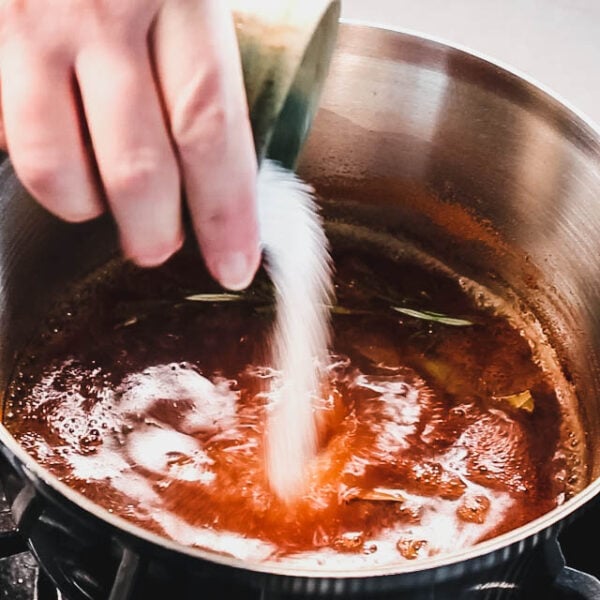 Step 2: Combine the brine ingredients and bring to a simmer. Add the salt and let dissolve. 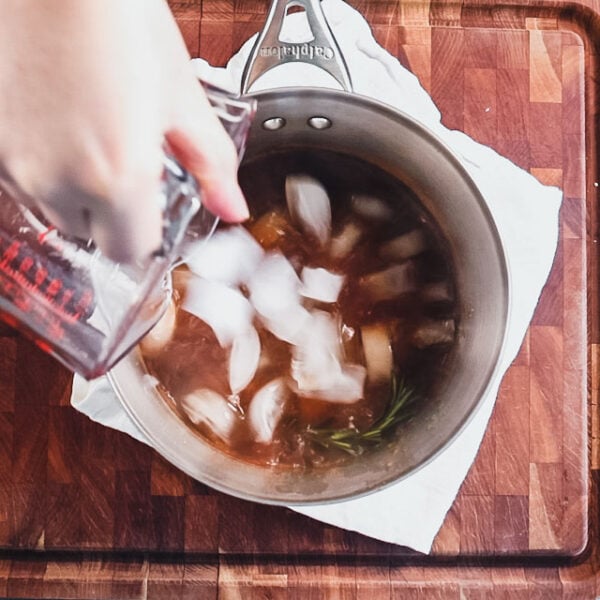 Step 3: Add ice to chill the brine down. Let melt completely into the brine. 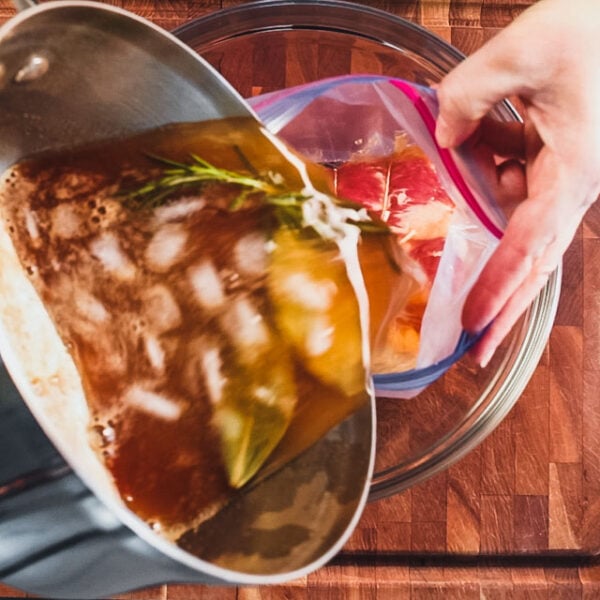 Step 4: Set a 1 gallon Ziplock bag in a deep bowl. Add the pork and brine to the bag. Refrigerate for 4 to 6 hours. 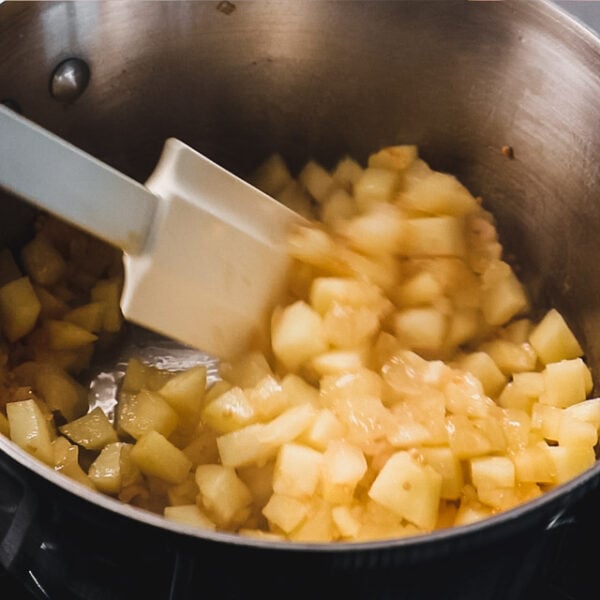 Step 5. Make the chutney by simmering the diced apple with the other chutney ingredients in a covered saucepan. Stir occasionally. 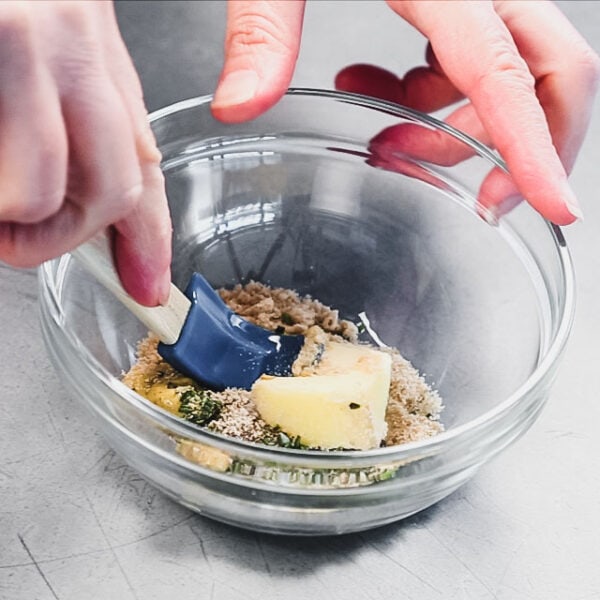 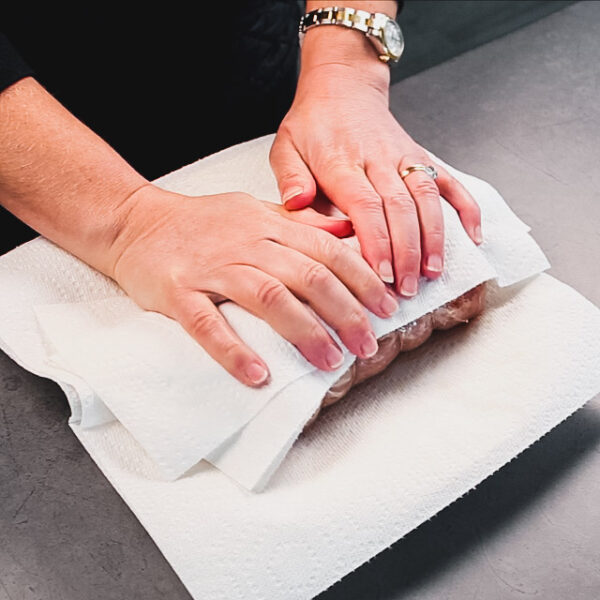 Step 7: Remove the pork from the brine. Pat the pork dry with paper towels. Discard brine. 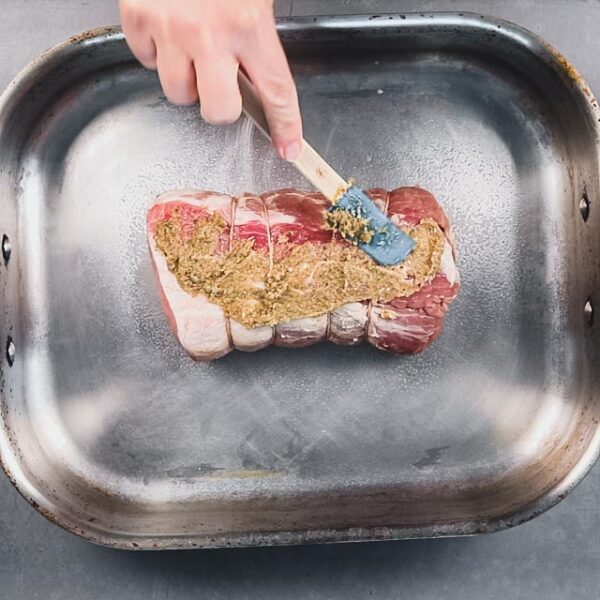 Step 8: Spread the maple butter over the pork. Roast for about 40 minutes. Test internal temperature with an instant read thermometer. 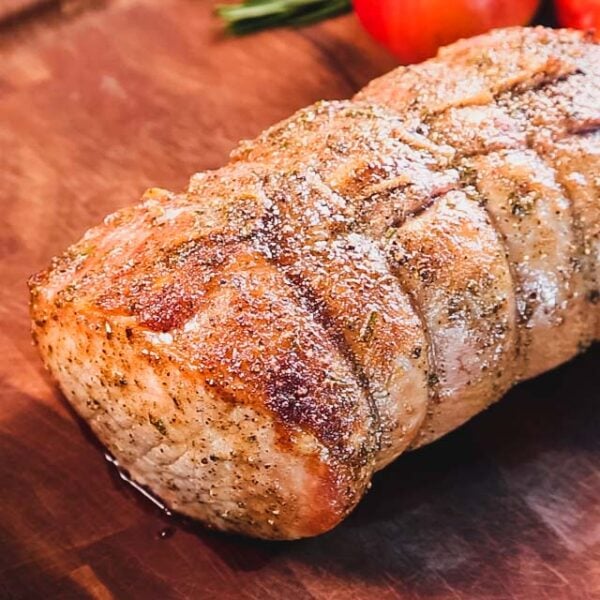 Step 9: Let the pork rest for 20 minutes. The carryover heat will continue cooking the pork.

Here are some ideas for what to serve this pork loin with.

Thanks so much for reading. If you make this recipe, please come back and leave a star rating and review.

Pork loin roast has a reputation for being dry and boring, but this cider and maple brine makes it anything but. It stays nice and moist, and the flavors pop when paired with the mustard-seed speckled apple chutney.

1.     Brine pork: Whisk cider and ½ cup maple syrup maple syrup in a medium saucepan, Add bay leaves, rosemary sprig and cinnamon and place over high heat. Bring to a simmer, stirring occasionally. Stir in salt until dissolved and remove from the heat. Stir in ice. Brine should be room temperature or colder.

2.     Tie pork with butchers twine in several places to hold a round shape if desired. Place pork in a deep bowl or re-sealable bag set in a bowl. Transfer the cider brine mixture to the bowl or bag to cover the pork. Reseal bag if using. Refrigerate 4 to 6 hours.

3.     Make Chutney: Melt butter in a medium saucepan over medium heat. Add shallot, and cook, stirring often until fragrant and starting to brown, 30 to 90 seconds. Add vinegar, 2 tablespoons maple syrup, mustard seeds and salt. Increase heat to high and bring to a simmer, stirring often. Add apples, stir to coat, cover and bring to a simmer. Reduce heat to medium-low and simmer, covered, stirring occasionally until the apples soften and start to break down 4 to 6 minutes.

5.     Remove pork from the brine, discard brine, and pat pork dry with paper towels. Mix maple sugar, butter and mustard in a small dish. Add the remaining ½ teaspoon chopped rosemary, pepper and salt and stir to make a paste. Spread the paste over the pork and set in a small roasting pan.

6.     Roast pork until a thermometer inserted into the center of the roast reaches 125 degrees F, 38 to 45 minutes. See note. Let rest on a carving board 15 minutes before removing twine and slicing. Serve with the warm chutney.

The center of the roast should be 125 degrees F when you take it out. As it rests, the temperature will continue to rise. As you can see in my photos and video there is only the slightest hint of pink in the center of the roast. Note: the USDA says to roast it to 145 degrees before taking it out of the oven. This will result in a much dryer roast, but if you have safety concerns or health issues, please follow their guidance.