Making your own home made pumpkin puree couldn’t be simpler!  Then using it in this yummilicious brown rice pumpkin risotto really makes it sing. Trust me this will become a favorite whole grain entree that you can make all Fall and Winter long!! 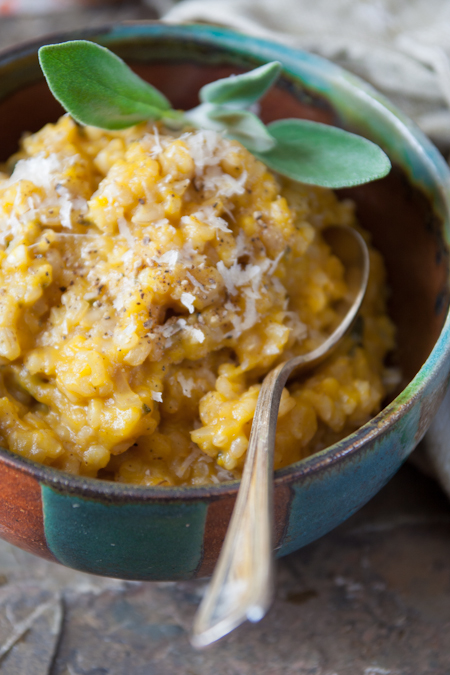 This week I pulled a favorite healthy seasonal recipe out of the archives to talk a little bit about how to cook a pumpkin. The original post/recipe for brown rice pumpkin risotto calls for pureed pumpkin, which you can either make from scratch or use canned. I never mentioned how one goes about making it from scratch. 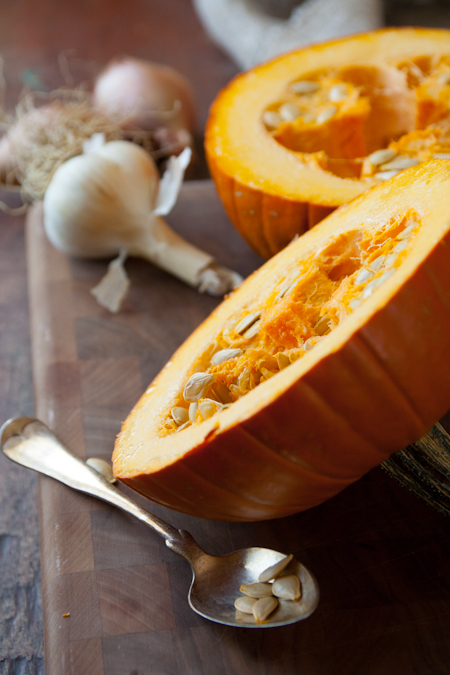 Which Variety of Pumpkin Makes The Best Puree

So here is what you do: First of all, make sure you start with a cooking pumpkin. I bought mine at a grocery store, but you will also be able to find them at Farmers’ Markets. Or you may be seeing them in your CSA. These cooking pumpkin varieties will typically be a lot smaller than the jack-o-lantern carving type pumpkins. They will be labeled something like “pie pumpkin.” Mine were a variety called “sugar baby.” These cooking pumpkins are less fibrous and make smoother sweeter puree.

How to Cook Pumpkin to Make Home-Made Pumpkin Puree

Next you have to cut the pumpkins in half. It is safest to use a very sharp Chef’s knife to to this. Cut the pumpkin in half along the equator. Then use a large spoon to scrape the seeds and pulp out of the center cavity. You can save the seeds and roast them too. Then to roast them, I like to line my baking sheet with parchment paper. The reason I do that is that when the pumpkin touches the baking sheet the naturally occurring sugars in the pumpkin will caramelize and that part of the pumpkin will be dark and tough when pureed. The parchment minimizes the caramelization. If you don’t have parchment, you may just want to scrape off that darkened part to make the smoothest puree.

Next, place the pumpkin cut side down on the parchment. This will trap the natural moisture in so the pumpkin will almost steam itself a bit, and stay very moist. Then you roast them at 350. Normally when you roast vegetables you’ll go for a hotter oven temp, like 400, but that causes the aforementioned caramelization of the sugars, and you really want to minimize that. So a 350 degree oven is better.

Also, a microwave works really well too and is faster. You’ll need to add water to the microwave safe baking dish to help steam the pumpkin. One of the drawbacks to cooking the pumpkin in the microwave is that you can only do one at a time, and with smaller pumpkins. Since I freeze my pumpkin puree, I like to do a bigger batch of puree and cook a couple pumpkins at once. So an oven works better for that

How to Tell if the Pumpkin is Fully Cooked

Roast the pumpkin until it is soft. To tell if it is soft you can carefully flip it over with a spatula and tongs, and test the flesh with a pairing knife or fork. Personally, I like to just press my finger into the flesh (really fast since it is really hot) and if the pumpkin is soft enough it will give away slightly under the pressure of my finger. If you’re afraid of touching hot pumpkins, you can do this with a wooden spoon, but it is harder to tell if it is really soft or not. Or you can try the first method of the flip and poke.

How to Make the Cooked Pumpkin into Pumpkin Puree

Once the pumpkin is soft, just pull the baking sheet out of the oven and let the pumpkin cool on the parchment. To speed the process you can carefully flip it over cut side up and allow the steam to escape or you can leave it cut side down. The pumpkin will collapse as it cools. This is normal. Once it is cool use a spoon to scoop the cooked flesh out of the skin. The skin will be softer now, so try not to get any of the skin in with the flesh. Scoop batches of it into the food processor (don’t over-fill it) and puree until it is smooth. You may have to stop the motor and scrape down the sides to ensure the smoothest puree.

I made a large batch, and divided it up into smaller 2 cup portions to freeze. Most recipes for pumpkin call for 2 cup increments or a 14 ounce can, so I find this is the most useful portion to freeze.

Below you can print the recipe for home-made pumpkin puree which details all of these steps.

Make sure you check out my post on how to peel and dice a whole pumpkin and my recipe for Pumpkin Vegetarian Thanksgiving Pilaf too.

Here is that Risotto Recipe I mentioned. Enjoy!