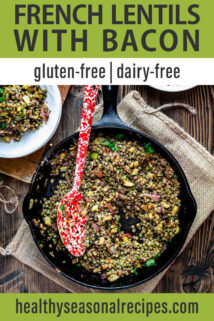 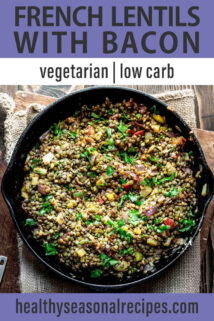 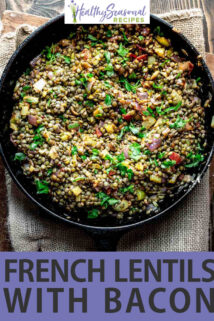 Lentils with bacon is one of my favorite side dishes. This version is made with French green lentils, and a vinaigrette made with cider vinegar, smoked paprika, celery hearts and just enough bacon to make them utterly succulent.

This post was originally shared on January 4th, 2011. I am re-sharing it today with updated images and some of the text has been updated as well. This post contains affiliate links.

I have been making a version of this French lentil recipe for years! Back when I was a cooking at restaurants, it was one of the side dishes served with salmon. It was sort of a twist on the French bistro classic pairing combo: Salmon with Lentils. The bacon addition was an innovation of the chef, and one that I wholly supported and loved. That smoky bacon flavor, the sour vinaigrette and the fatty salmon was a match made in heaven!

Ingredients Notes For This Recipe

For this recipe look for “green” lentils or those labeled French or Du Puy Lentils. They are great in this recipe because they hold their shape and texture better than other types of lentils.

I only used a small amount of bacon to add flavor to theis dish, so it is best to look for thick cut if you can. It has the best chewy texture when mixed into the cooked lentils.

The olive oil is used to cook the veggies and to moisten the saute as well. I like to reserve a little bit of it to stir in at the end, so if you have a more fruity olive oil for finishing dishes, use that (at least for the final step.)

The sauteed red onion in this recipe help build a more complex flavor and savory taste. I like to dice the onion pretty finely, because all of the other ingredients are so small. I like when it blends right into the lentils.

I like to use the tender light green stalks in the center of the bunch for this recipe. The combo of the light green stalks and frilly leaves have a slightly sweet and slightly bitter taste that balances with the sour vinegar and salty bacon. Chop them finely so they become tender more easily when sauteed with the onion.

This is such a simple dish, and lentils can be pretty flat tasting on their own, so I added two tablespoons of chopped garlic to the veggie mix (in addition to the onion) to really make the flavors are rich as possible.

If you happen to make roasted garlic, two tablespoons of that would be an amazing addition instead of fresh. Stir it in with the vinegar.

For seasoning I used salt, pepper and thyme which are classic ingredients in French Bistro style lentils. I pepped up the smoky bacon flavor with smoked paprika.

This recipe would not be complete without the addition of vinegar. I chose cider vinegar today, but sherry vinegar would be my second choice and red wine vinegar a close third. You can read more about the different types of vinegar here.

Feel free to substitute another vinegar, but I do not recommend balsamic because it is too sweet.

I think adding fresh raw parsley at the end is essential for contrast and grassy freshness to balance the earthy and smoky lentils. Just chop a handful of washed parsley leaves (no need to measure) and add it in after the lentils come off the heat.

How To Make Lentils with Bacon

Here are some notes and answers about the details of this recipe. The full printable recipe is below.

Sorting dry beans and lentils is important because they can sometimes include foreign matter (like tiny pebbles) in them that are too hard and could crack your tooth! To sort the lentils follow these easy steps:

Lentils and dried beans can be tricky to cook with acid or salt, and do not soften, so I always recommend boiling them separately.

As I said earlier, you do not need to soak lentils before boiling them. They cook in about the same amount of time as white rice!

While the lentils are cooking, cook the bacon in the skillet. It is only three strips of bacon, but you will want a skillet large enough to accomodate the veggies and the lentils too.

Use the bacon skillet to cook the veggies.

Add 1 tablespoons plus 1 1/2 teaspoons of the olive oil to the skillet and swirl it.

Add the onion, celery and garlic as well as the salt and thyme and saute them until the celery is crisp tender. If you need to reduce the heat under the skillet, do so. We do not want to brown the veggies too much.

Step 4. Add Lentils To The Veggies

Once the veggies are softened, add the cooked drained lentils, the reserved cooking liquid, the vinegar and smoked paprika. Let the mixture heat through and simmer a moment. The cooking liquid will reduce a bit.

To finish the dish, pull the skillet off the heat and stir in the crumbled bacon, parsley and a drizzle more of olive oil.

This recipe is great for entertaining and can be made ahead easily.

Thanks so much for reading. If you make this recipe for French Lentils with Bacon, please let me know by leaving a star rating and review. I would love to know what you think!

Lentils with Bacon, a French bistro inspired way to add lentils to your diet with the indulgent flavor of bacon. Serve as a mostly-meatless main, or with salmon.

Can be made ahead and reheated. For best texture and color, add parsley and bacon after reheating. Re-warm on the stovetop with a couple tablespoons of water, stirring often. In the microwave reheat until steaming hot.

18 comments on “French Lentils with Bacon”