Here is a recipe for Healthy New England Seafood Chowder you are going to want to save! It is thick and creamy but it has only 350 calories per 2 cup serving, and it is loaded with tender potatoes, vegetables, herbs, clams and fish. I have a gluten-free option too. 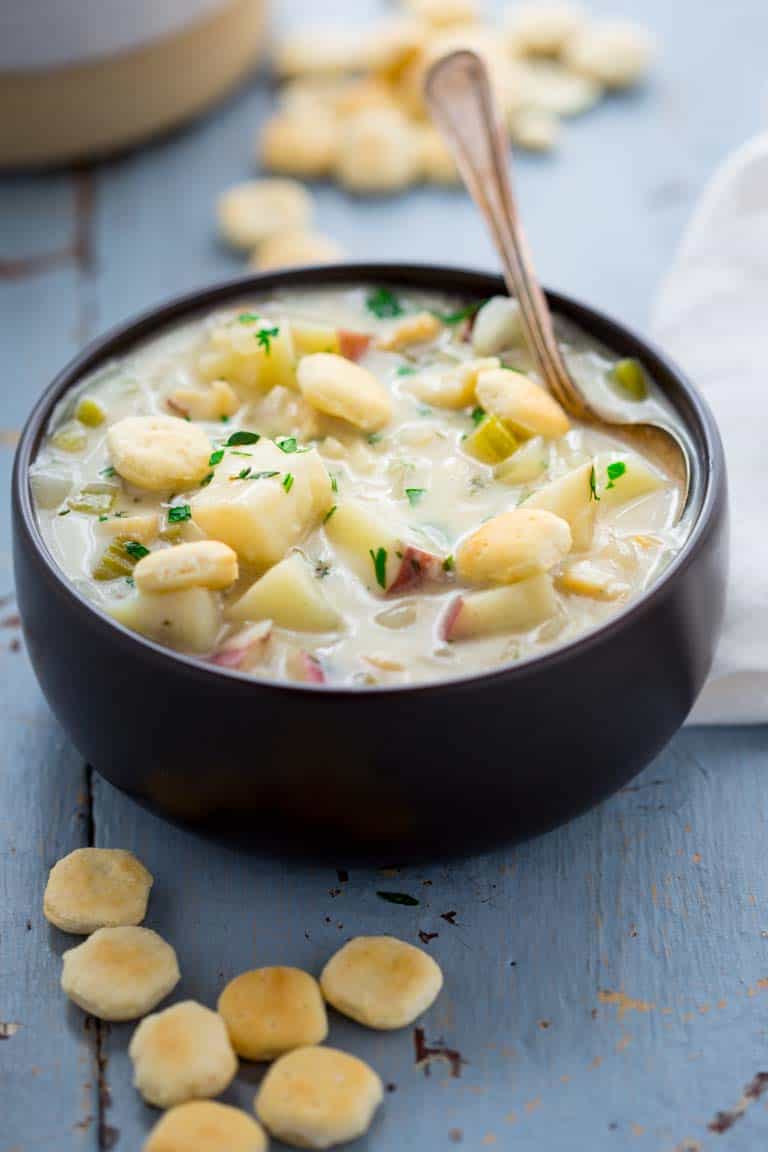 When I think of creamy New England Seafood Chowder, I always think of going out to eat with my Grandmother. Once a summer, my Grandmother would take my family to eat at Perry’s Fish House, a seafood restaurant here in Vermont. It wasn’t a particularly great restaurant, but we loved it.

I think Grandma liked to take us there because she wanted an excuse to order lobster, and she knew that if she had the whole family there as her witness, Grampa couldn’t really give her too hard of a time about ordering such an extravagance.

We’d lumber up Route 7 in my grandmother’s beast of a Lincoln. Jessie and I, even as tweens already overly-food-obsessed, would excitedly banter about ordering the bathtub of chowder as we sat in the back seat. 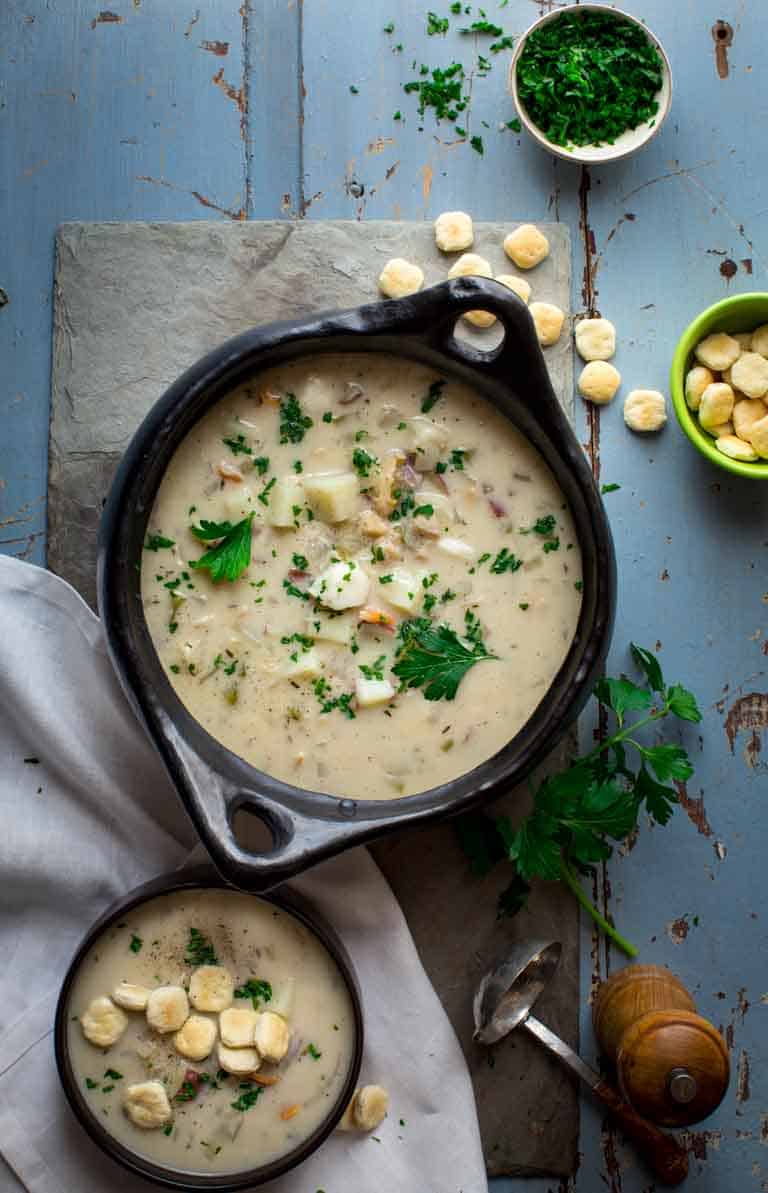 We called it a bathtub because the most notable part about the New England Seafood Chowder was that it was served in obscenely enormous oblong bowls. Our running joke was that they were not actually bowls, but in fact bathtubs. I think my mom tried to talk us out of ordering it, as that meant us missing out on other more exciting menu options. Plus in the middle of the summer it was always way too hot for Seafood Chowder.

Do you think we listened? 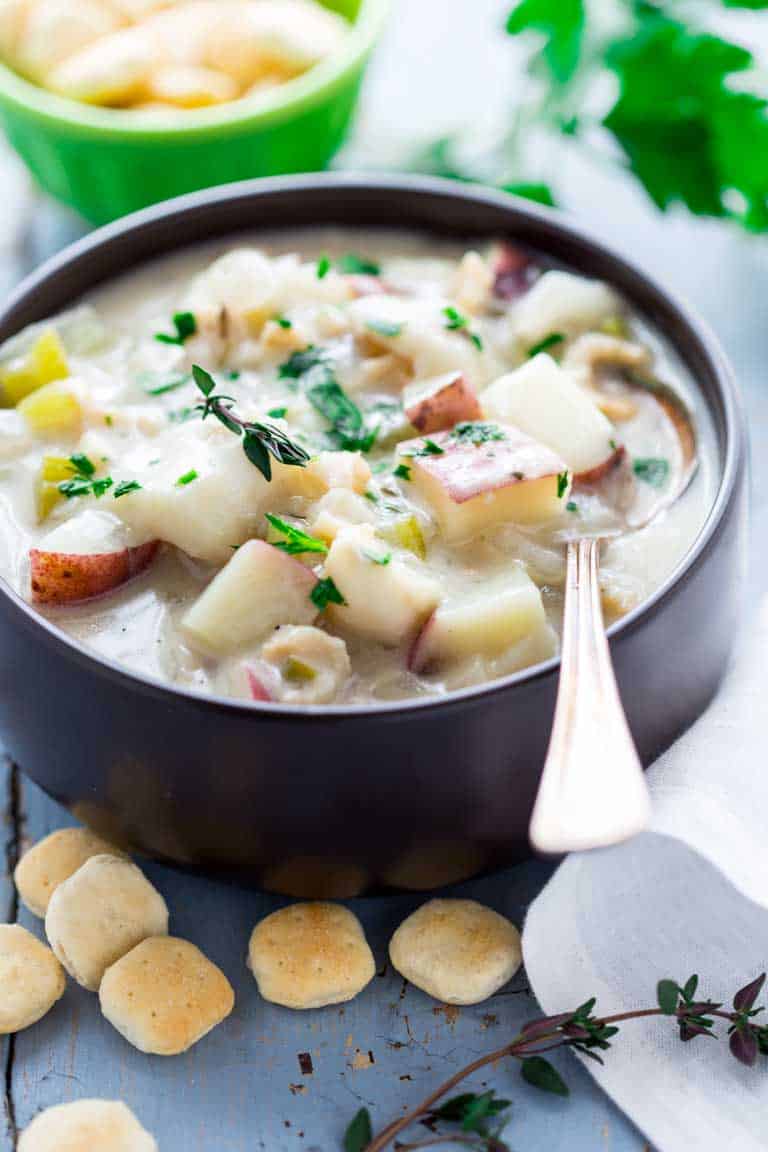 The heat lifting off the parking lot, we’d pause before entering the air-conditioned restaurant, to admire the kitschy seagull recording played along the rope-adorned “docks.” The entry walkway was decorated to look like a dock on a fishing pier.

Looking back, I don’t think I ever did order the lobster because I remember loving the bathtub of New England Seafood Chowder so much. Though the lure of having one of those plastic lobster bibs was a pretty enticing prize.

Try as we might, I don’t think we were ever able to finish a serving of the Seafood Chowder. It was exuberantly rich and far too large for any mere mortal. Eating anything else afterwards was certainly out of the question. No bib, and no lobster for us. 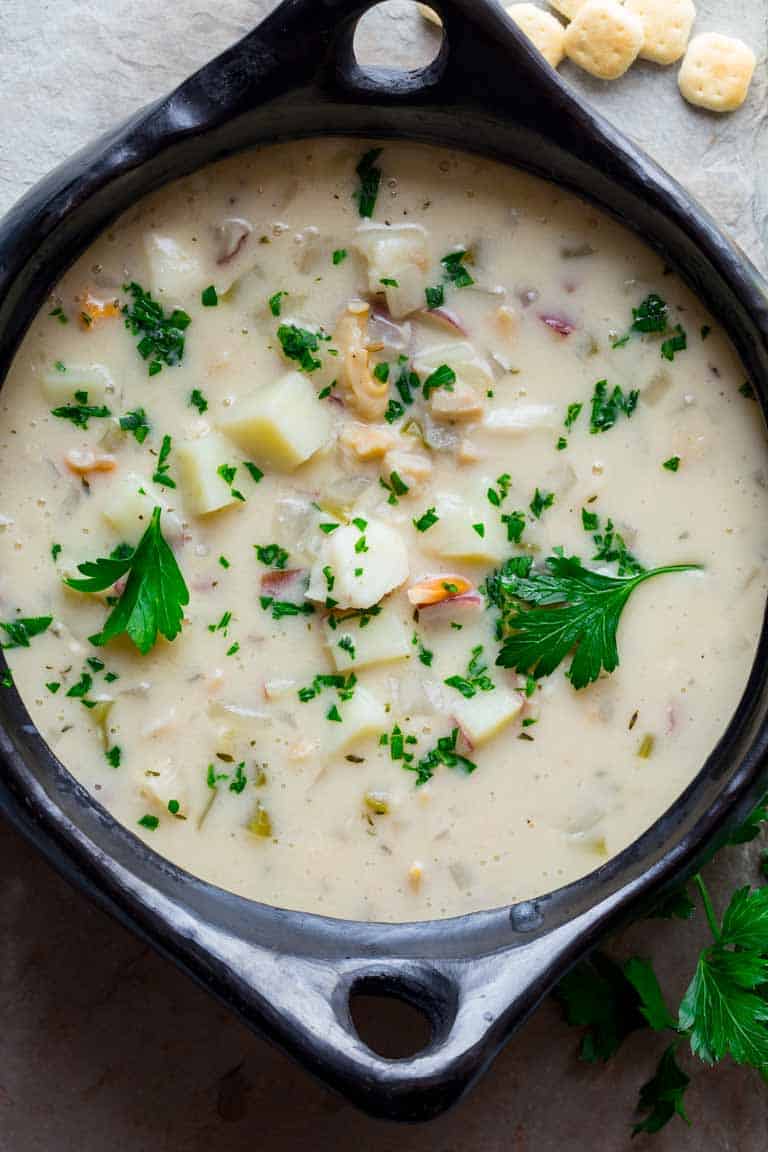 Now that I am older and have traveled around New England I have had far better chowder than that served at Perry’s Fish House, and even if I did want to try it for old times sake, the restaurant is no longer there. Now I know that good chowder is not related to the size of the bathtub, er bowl, but rather that it is thick and creamy, the potatoes still holding their perfect square shape but meltingly tender. It should taste from the sea and slightly sweet from the freshness of the seafood. It’s also best if there are more clams, fish, celery and potatoes than creamy broth. I like a little bit of herbs, a scattering of crackers. Sometimes a bit of bacon or corn can get added in. But nothing too jazzy. 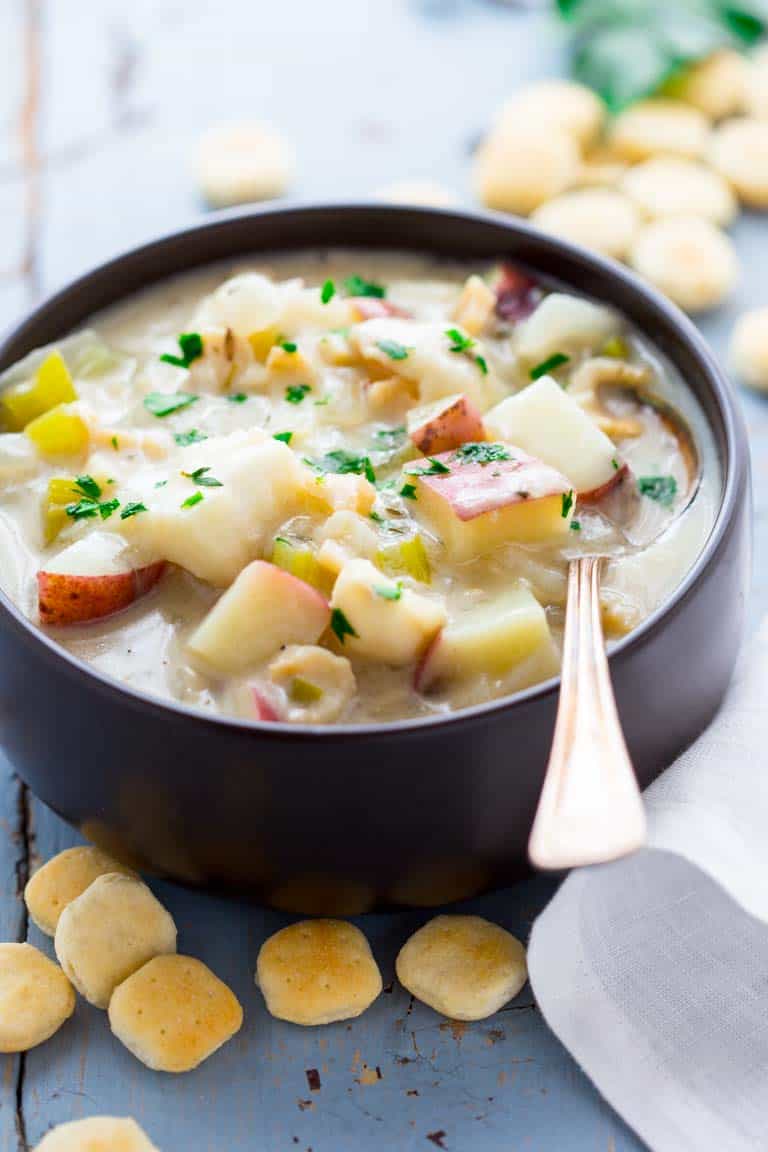 How I Healthified this Home-Made New England Seafood Chowder 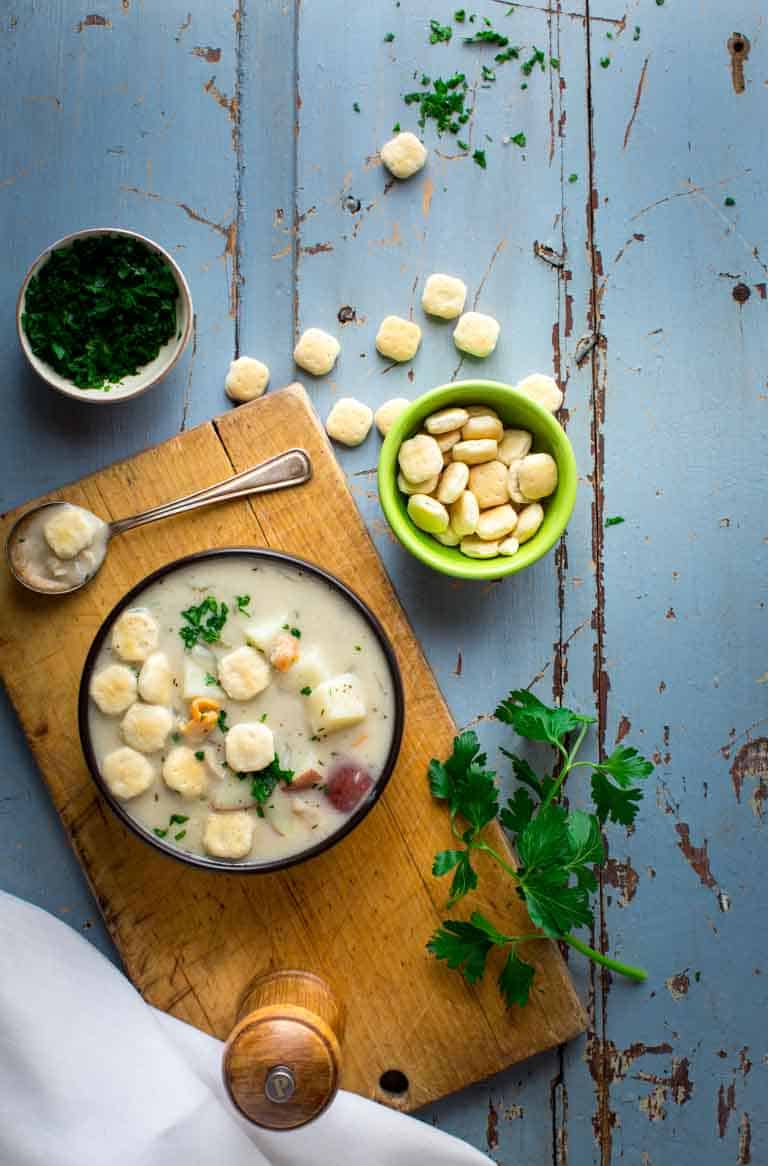 QUESTIONS:
Do you have memories of going out to eat with your grandparents?
Did you like seafood when you were a kid?
Have you made New England Seafood Chowder before? 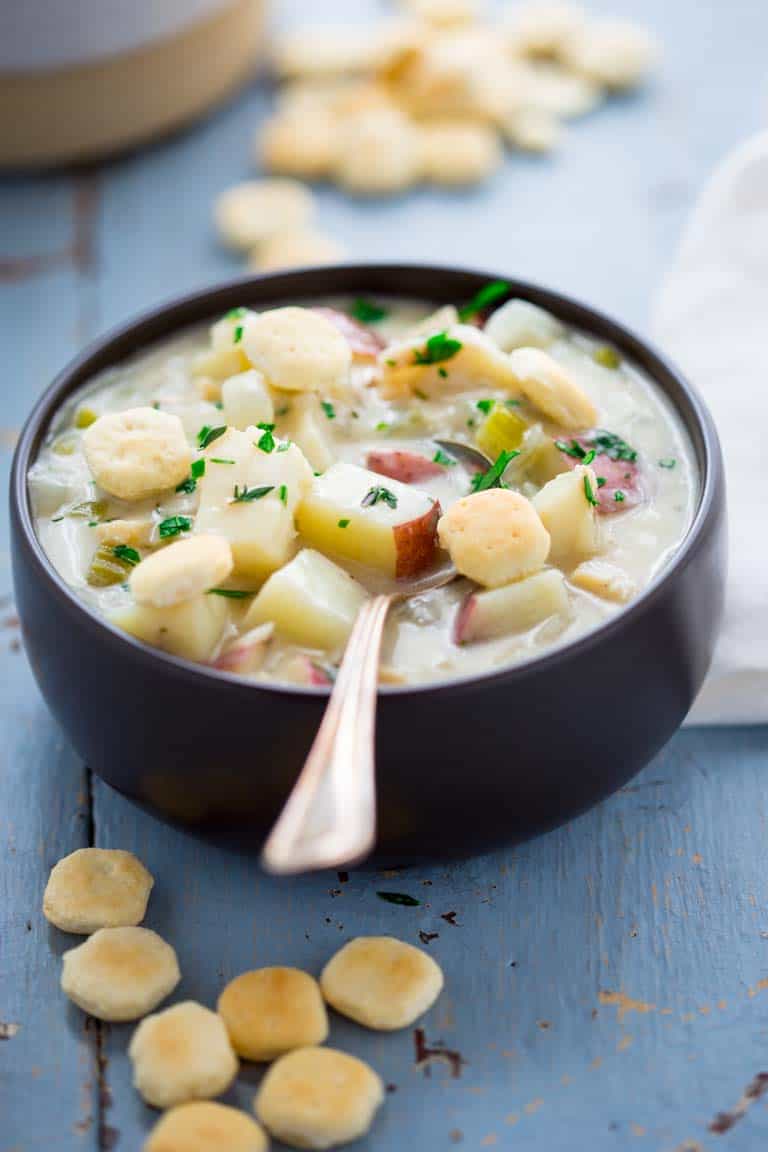 This creamy New England Seafood Chowder is not too heavy, filled with fresh vegetables and lean seafood and is ready in 45 minutes. I added just ½ cup of half and half to finish it, which adds only 2 ½ grams of fat per serving making it a delicious and healthy lunch or dinner!

« Previous Postlentils with bacon
Next Post » sweet potatoes with coconut, curry and mint