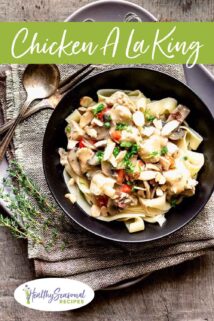 This creamy chicken a la king recipe is a homemade version of the classic comfort food dish and is loaded with fresh vegetables and a splash of cream. Pasta replaces puff pastry so that it comes together in just 30 minutes making it a perfect weeknight meal!

I originally shared this recipe on September 16th, 2016. I have new images and updated some of the text today.

Why You’ll Love This Creamy Easy Chicken a la King

When I developed this recipe in 2016, I knew I wanted to make a Chicken A La King recipe in my own healthy veggie forward way, but to give it that creamy comfort food classic flavor at the same time. I also wanted to make sure it was a simple enough recipe that it would be ready in a half-hour for a busy weeknight. This is a great recipe for when you want to have something cozy and comforting but don’t have a ton of time! You can even use leftover cooked chicken to make this recipe even faster.

What Is Chicken A La King?

Though I remember eating this meal as a child, I wasn’t entirely sure that it was the way I remembered it. So I consulted my copy of The Joy of Cooking before working on this recipe. I found that Chicken a la King is a classic dish consisting of creamy chicken and gravy with red pepper, fresh mushrooms and sherry cream sauce. The timing of it’s origin is unkown, but it gained popularity in the early 1900s. It is typically served in a golden and buttery puff pastry shell (vol au vent.) It can also be served over rice, toast points, noodles or buttermilk biscuits. Some versions contain sweet peas too.

The Joy of Cooking recipe calls for serving almonds on top. Though my mom never served hers with almonds, I really enjoy the texture they add to the final dish and have added them here.

After testing and retesting this recipe, the resulting 30 minute dinner is both creamy and comforting, but our lighter version is lower in calories than most Chicken A La King recipes. You can skip the egg noodles to shave off even more calories and serve it with Cauliflower Rice instead.

Here are some of the ways I made classic chicken a la king easy and healthy:

To Make It Easy: To make this recipe ready in only 30 minutes, we cook the chicken separately in another pot. You can also use leftover chicken or rotisserie chicken too to make it easier!

To Make It Healthy: I added extra veggies (many recipes use jarred or canned veggies which are high in sodium and do not have as many vitamins) and thickened the sauce with flour instead of egg yolk. Then I only needed a little half and half to make the sauce creamy. I also skipped right over the fussy/fatty puff pastry business, and opted for pasta instead.

Step 2: Meanwhile, place chicken breast in a medium saucepan and cover completely with cold tap water. Place over high heat and bring to a simmer. Reduce heat to maintain a gentle simmer and cook, turning in the poaching liquid occasionally until the chicken is no longer pink in the center and cooked through, 12 to 16 minutes, depending on thickness of the meat. Remove the chicken and cut into cubes.

Step 3: While pasta and chicken cook, heat one tbsp butter and oil in a large skillet or non-stick skillet over medium-high heat, swirling to melt butter. Add mushrooms, bell pepper, garlic, thyme, salt and pepper and cook, stirring occasionally, until the mushrooms have softened and released their juices, and the juices have evaporated and the vegetables are starting to brown, 8 to 12 minutes.

Step 4: Add sherry to the mushroom mixture and cook, stirring until evaporated. Stir in flour to coat the vegetable mixture.

Step 6: Remove from the heat and stir in half and half. Serve the chicken and sauce over the noodles. Top with almonds and parsley. Serve hot.

FAQs and Expert Tips For This Recipe

Can this be made ahead?

Yes! This recipe reheats beautifully. The sauce will become very thick, and may need to be thinned with a splash of chicken broth. Keep it stored in an airtight container for up to three days. It can be frozen for 2 months.

Can this be made without Sherry?

Sherry adds flavor that is hard to replicate. If you prefer to cook without alcohol, skip the step of deglazing with sherry and add 1 teaspoon Worchestershire sauce with the broth instead.

What goes with chicken a la king

This is served with egg noodles, but it can also be served as a main dish with rice, biscuits or puff pastry. Side dishes that pair well include sauteed green beans, steamed broccoli and sauteed kale or sauteed swiss chard.

This creamy chicken a la king recipe is a homemade version of the classic comfort food dish and is loaded with fresh vegetables and a splash of cream. Pasta replaces puff pastry so that it comes together in just 30 minutes making it a perfect weeknight meal!

If you prefer to cook without alcohol, skip the step of deglazing with sherry and add 1 teaspoon Worchestershire sauce with the broth instead.

Yes! This recipe reheats beautifully. The sauce will become very thick, and may need to be thinned with a splash of chicken broth. Keep it stored in an airtight container for up to three days. It can be frozen for 2 months.