I have another comfort food make over today. Healthy Skillet Shepherd’s Pie! I’ll just cut to the chase: it’s only 390 calories per serving and it’s gluten-free. It’s loaded with flavor, rich gravy, lean grass-fed beef and a bit of melted gooey cheese on top to make it unbelievably irresistible! 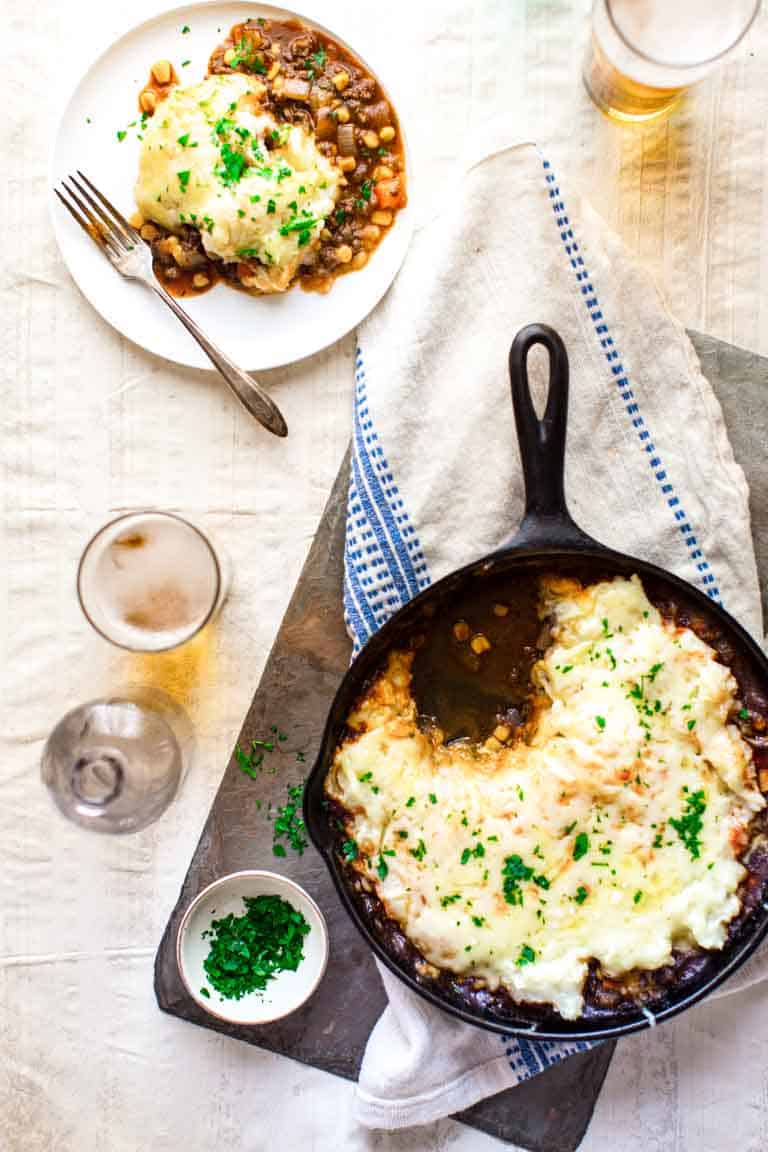 Vi used to take care of my sister and me once or twice a year if my parents ever went out of town. I have a lot of other memories of her. But they are of course skewed because I was only 10 or so when she took care of us, so that was a long time ago. I do know this. She was a character!

She was old. I think probably about 148 or 150 years old. {See my memory was very clear.} And I am also clear as day that she was about 4 feet 2 inches high. She wore mostly thrifted polyester pants, orthopedic shoes and several layers of hand crochet sweaters made of pastel acrylic. In the summer they were sleeveless. 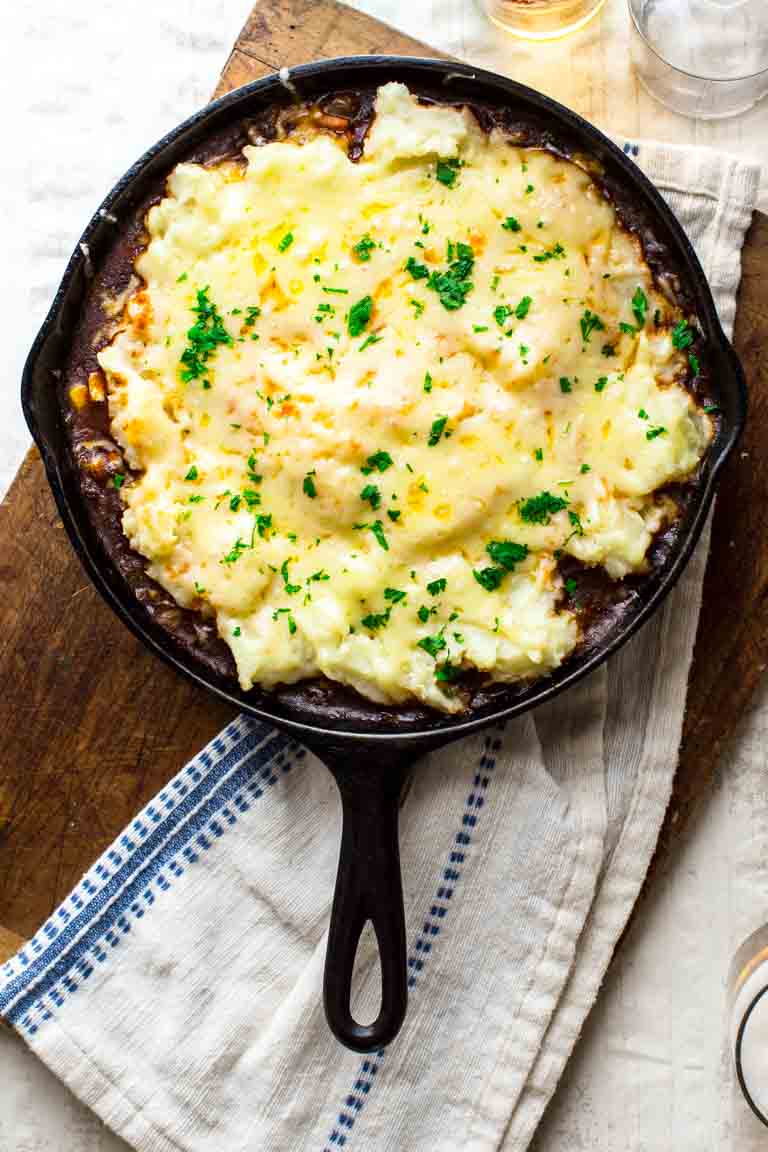 Vi having grown up in the early part of the 20th century in East London, had such a strong accent, that at times it was hard to understand her.

She would often tell my sister and me stories about her childhood, growing up in East London with her two sisters and their mother. No dad. She would tell us how they got by without any money at all. To me at age 10 living in my safe warm suburban home, it seemed like another world. Like a movie or a book. But Vi had lived it.

She would also talk about other more mundane or humorous memories too, stuff that is universally relatable no matter your age or background. Like how her sister Edie hated the taste of onions, and if her mother had cut her sandwich with an oniony knife she would complain about it. Siblings!

She was full of sayings, like “God helps those who help themselves.” And “a whistling woman and a crowing hen are neither fit for God nor men.” Ugh. I was a big fan of whistling so I heard that one a lot. Can you see the tween version of me rolling my eyes?

When I knew her, she was long retired and her life then was pretty simple; she would cook, knit, crochet, play solitaire, drink tea with lots of “real lemon” {and she was so thrifty that should would brew a second cup from the used bag.} She also watched a lot of TV–Knight Rider (the word “knight” I can hear her say it now!) and all sorts of Soap Operas on top volume for daaaaaays!

She taught me how to play kings in the corner, she taught Jessie how to knit, and me how to crochet. She took a lot of naps. 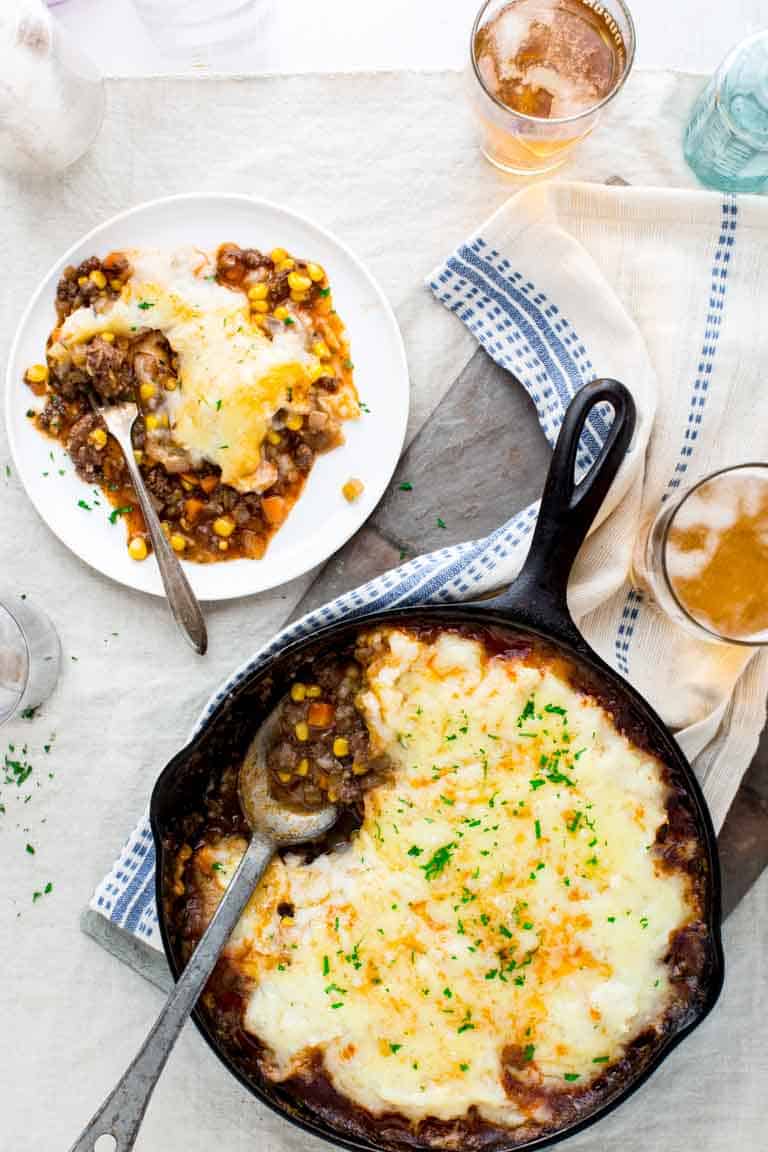 Vi prided herself in her cooking. All of it was classic English fare. Her real deal Fish and Chips were legendary. She made mashed potatoes that she would whip with copious amounts of fat with an electric beater until they were super smooth. Sweet Pie, Savory Pie and more Pie (pronounced “powie”) with the flakiest crust you’ve ever seen.

And she made Shepherd’s Pie. 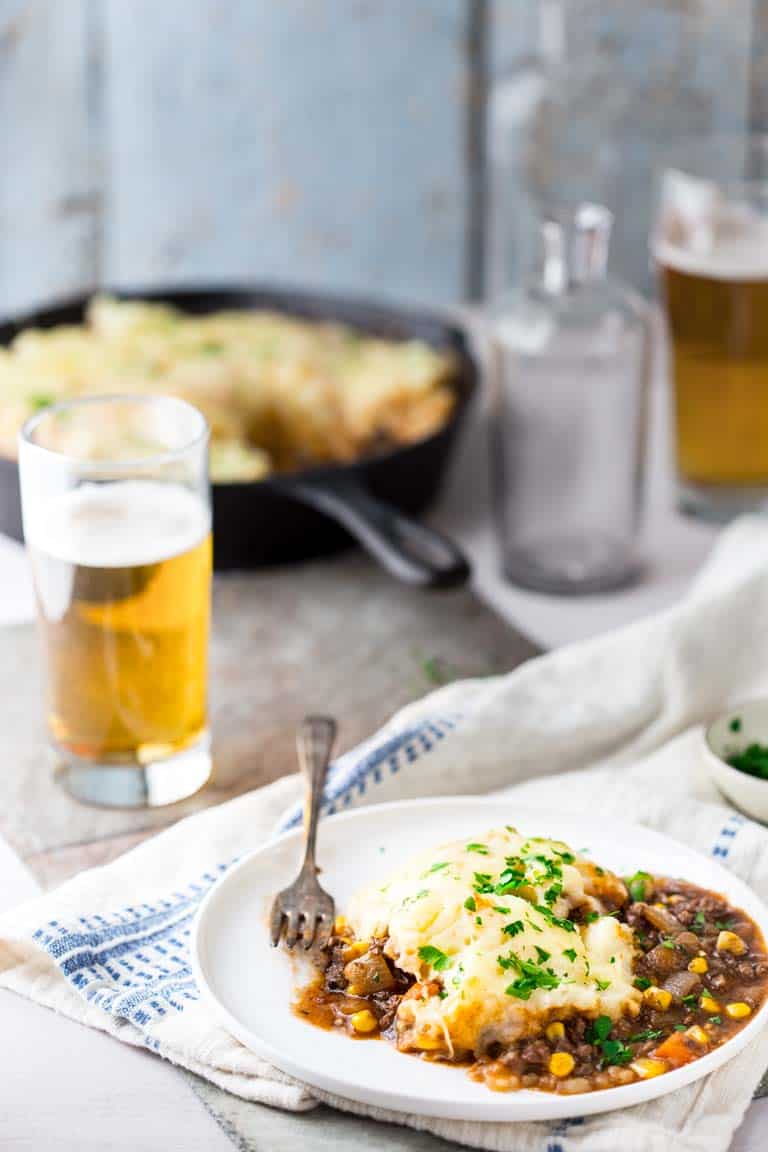 Vi’s Shepherd’s Pie was made with no-so-lean ground chuck. She would cook it in the skillet, breaking the pieces up until they were as tiny as possible. She added in corn. And to make the gravy more savory, she used a dash of Bovril. A secret ingredient if you will. Then it was topped with those uber creamy whipped potatoes. She’d swirl them over the beef, corn and gravy and bake it until the potatoes became golden and crispy. There must have been a pound of butter in the potatoes alone. Folks, this was a mean Shepherd’s pie.

And it’s nothing like this one that I am sharing here today. Cue the sound of someone screeching the needle off vinyl. 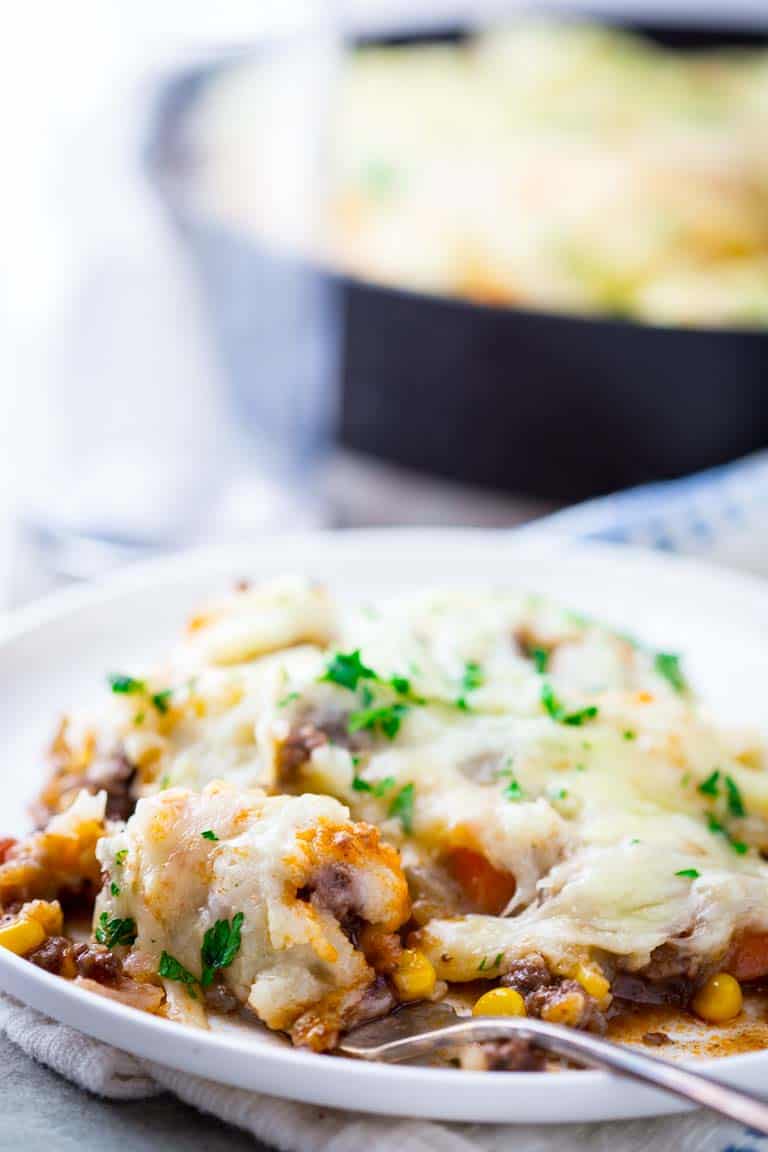 Here’s a video of how to make it!

Questions:
Did you or do you know anyone who lived during a completely different era?
Has the memory of them stuck with you?
Have you had authentic Shepherd’s Pie?

This Healthy Skillet Shepherd’s Pie is a comfort food make over with only 390 calories per serving and it’s gluten-free. It’s loaded with flavor, rich gravy, lean grass-fed beef and a bit of melted gooey cheese on top to make it unbelievably irresistible dinner!