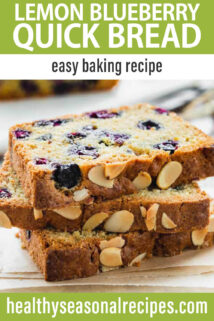 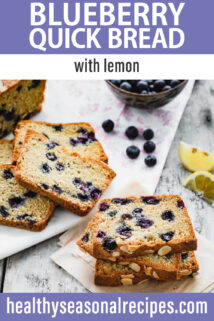 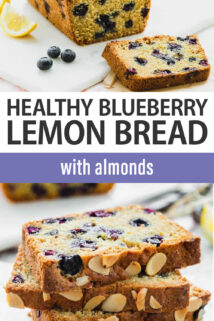 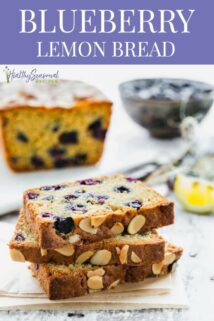 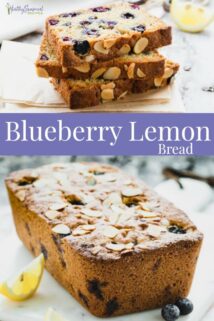 If you’ve been blueberry picking, then this Healthy Blueberry Lemon Quick Bread is an absolute must-bake recipe! It is sweet and lemony and bursting with blueberries. 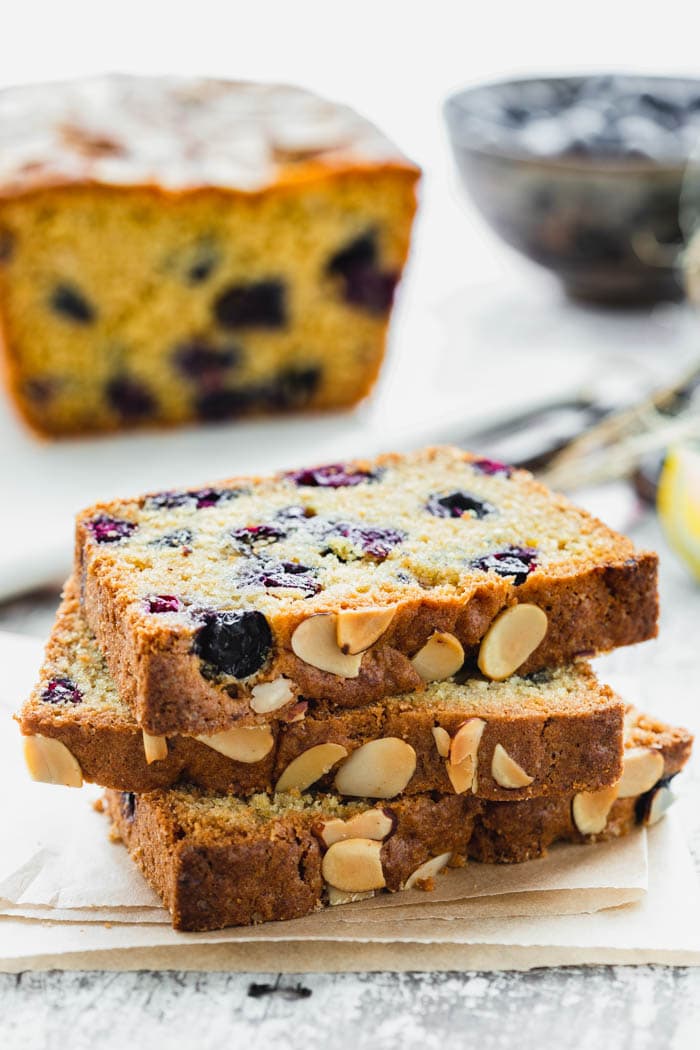 Every summer when we go blueberry picking I love collecting ideas for what to cook with the berries we bring home. Of course we freeze the vast majority for our blueberry smoothies all winter, but there are so many yummy things to do with the fresh berries. Like making Blueberry Maple Jam, or blueberry pie or even adding them to savory recipes like in this Kale Salad with Blueberries or the Blueberry Tabbouleh I love to make. 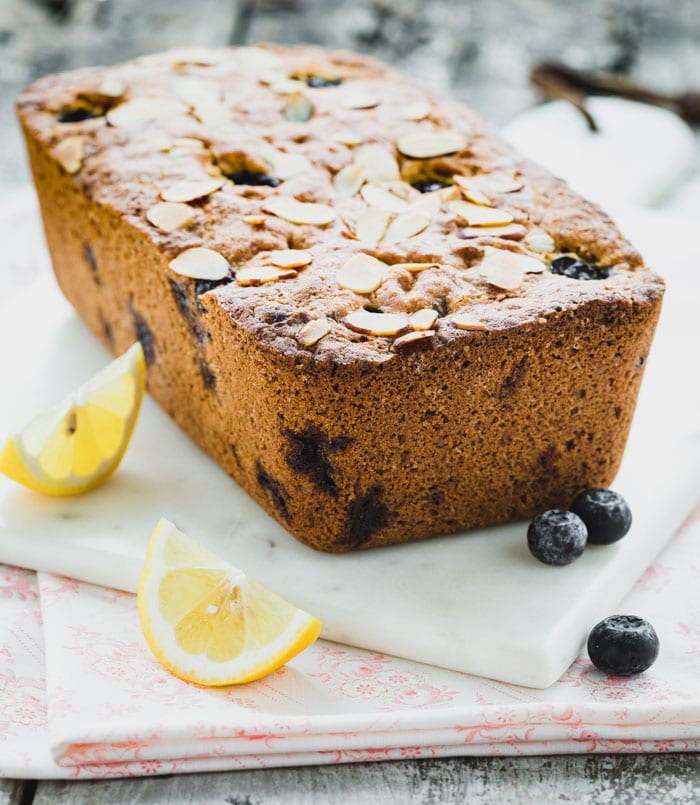 But my kids always want to bake blueberry bread. That’s when I realized I didn’t have a blueberry bread recipe here on Healthy Seasonal Recipes! Gasp! I decided to quickly remedy the situation.

I now can (almost) laugh at my ignorance thinking it would be a quick process!

You guys, this Blueberry Bread brought me to my knees. Developing this recipe was a feat! I am so glad I stuck with it though. 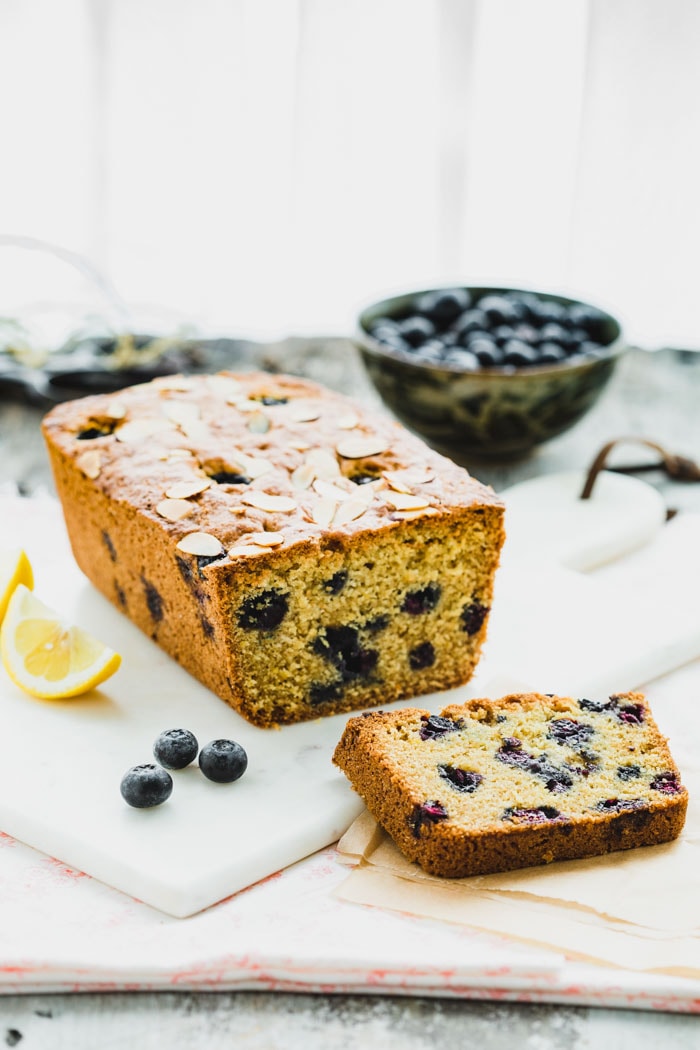 The science of baking never fails to humble me. I struggle to not take it personally when a recipe takes a bit longer to get to publish-worthy-status. I guess I am just an optimist.

When I slide that baking pan into the oven with the expectation that the resulting quick bread will be nothing short of blue ribbon material, I am surely setting myself up for disappointment. Yet, I do it. Nine times in a row.

And when the bread gets worse before it gets better, it is hard to not be down on one’s self. 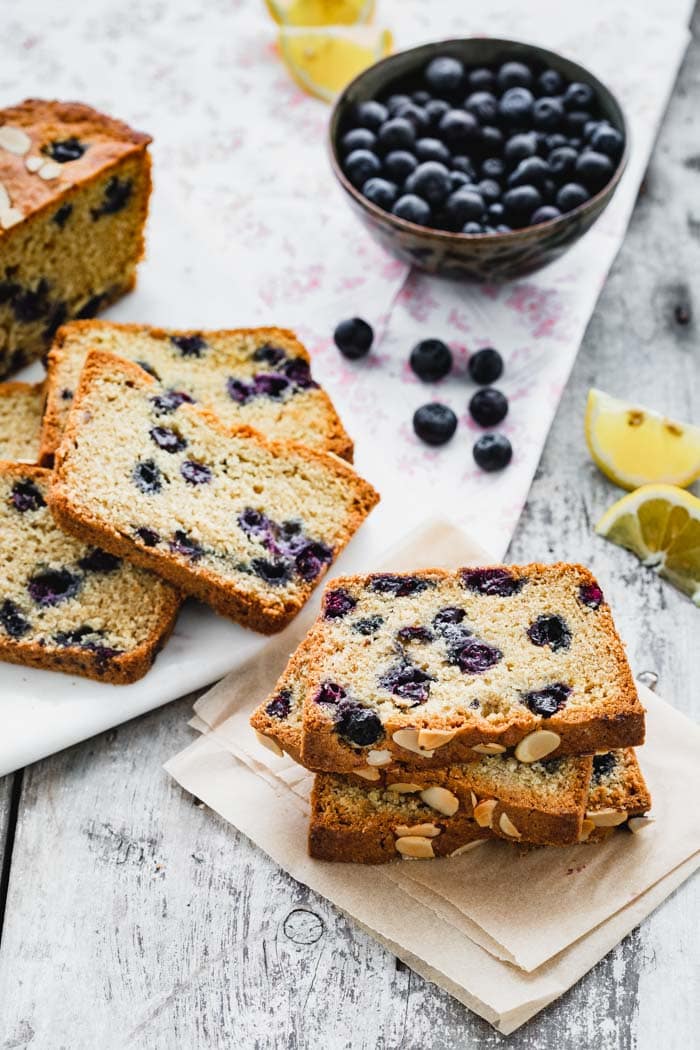 In order to keep this Blueberry Lemon Bread on the healthy side, I made sure that I didn’t just pour in the fat and sugar. Instead I made some other adjustments to the bread, and kept the total added sugar to under a cup, and the fat as well.

I used fresh blueberries in this recipe. In a couple tests, I tried using frozen berries, but they did not set up in the center. In one of the tests, I used frozen berries that were thawed and drained, and they worked fine, but I preferred the texture and juiciness of the fresh berries, so I prefer them while they are in season locally.

When zesting and juicing the lemon, zest first then cut in half and juice the lemon. I like to use a microplane zester to get the zest. It makes lovely fluffy zest that blends into the recipe well. It looks like a lot of zest, but it actually really doesn’t taste overly lemony when mixed into the batter.

I love lemon, almond and blueberry together so I added in a touch of almond extract and almonds on top. If you don’t do nuts, just skip them. The bread will work fine without them/the almond extract.

Though it may be tempting, try not to check on the bread too many times before the cooking time gets into the range. If you start checking it early you can end up collapsing the bread in the center if it is still liquid inside. Also you’ll let the hot air out of the oven, which will make it take longer and the rise won’t be as good. This would happen because the structure isn’t set inside. So my suggestion is to set the timer for 55 minutes and then check it. If a toothpick comes out with batter on it, keep baking for another five minutes. Then check again. 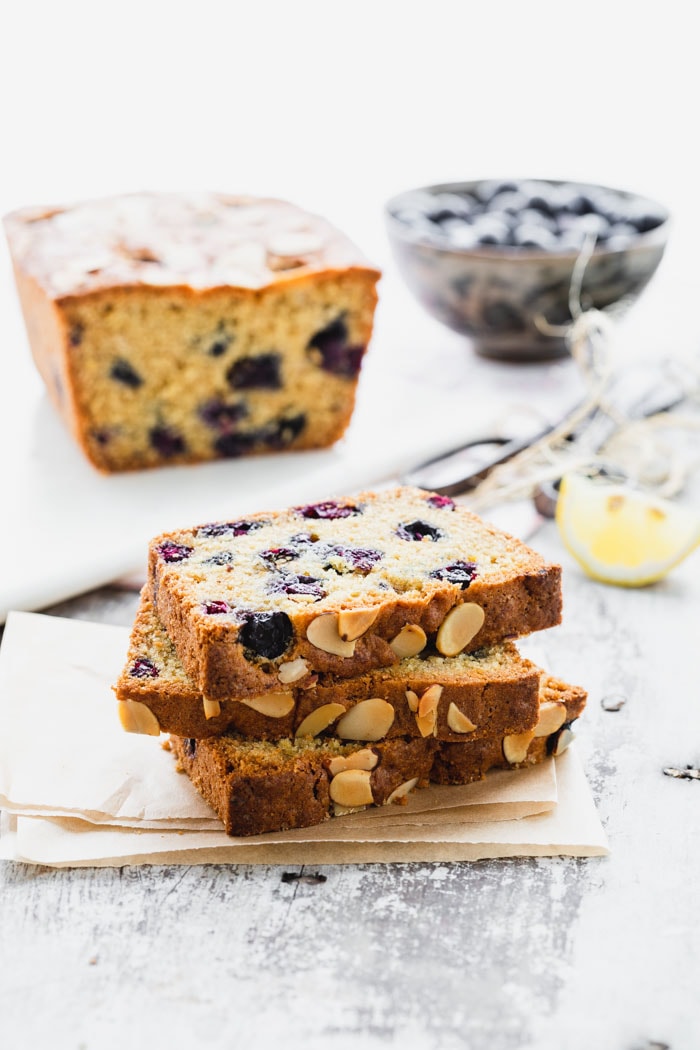 Ingredients for this Healthy Blueberry Bread

How To Make Blueberry Lemon Bread Step By Step 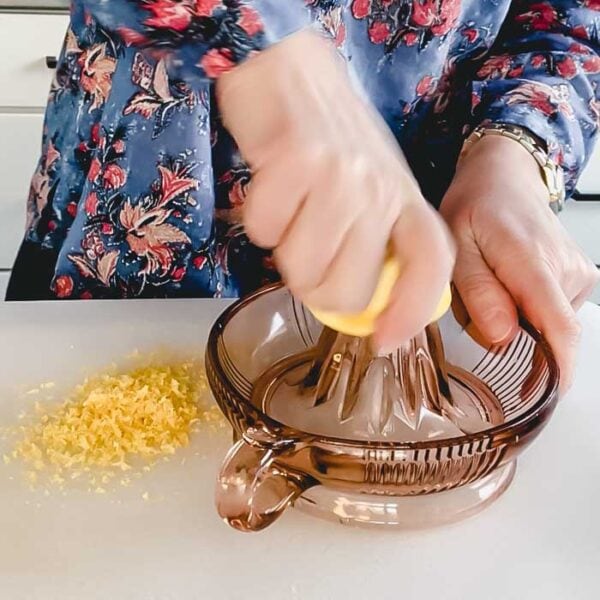 1. Juice and zest a lemon 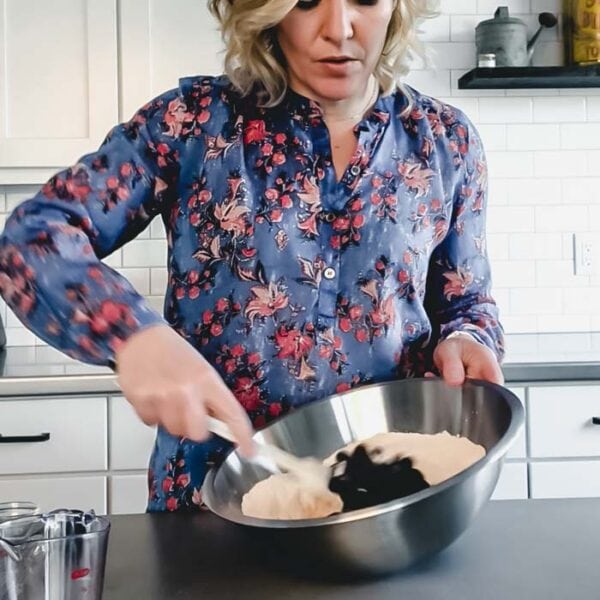 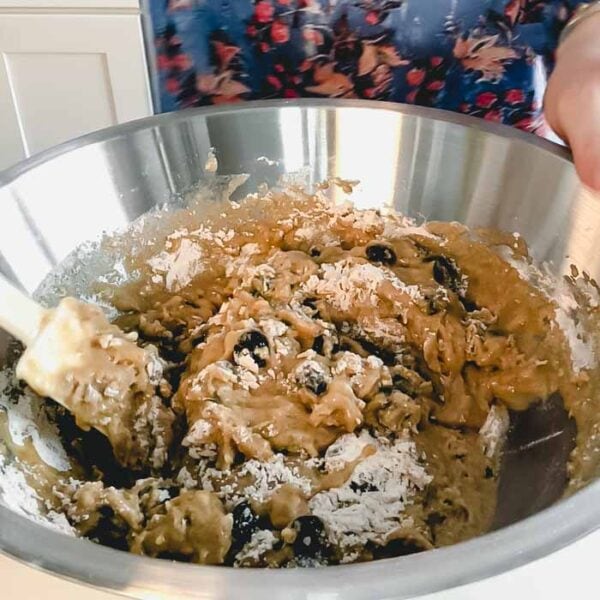 3. Stir the wet and dry ingredients together. 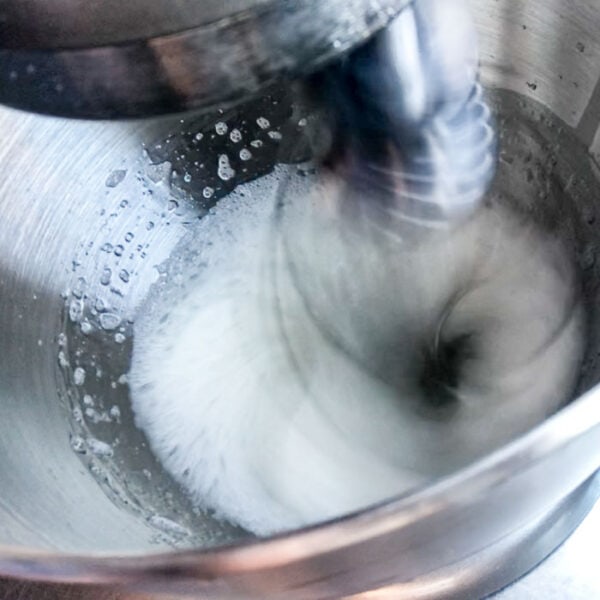 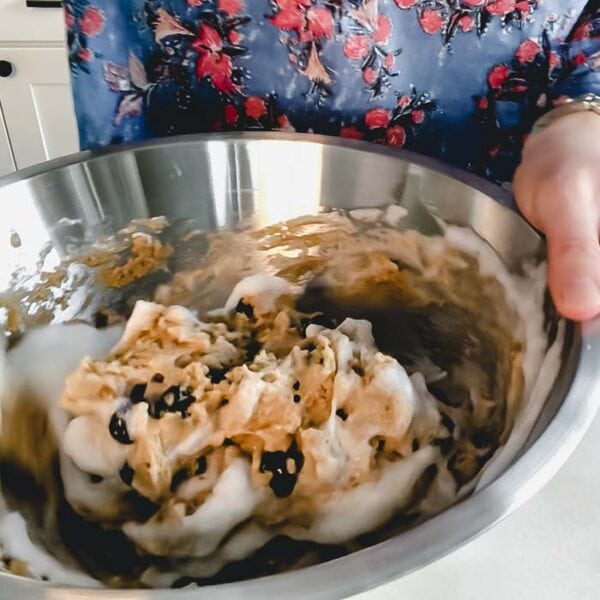 5. Fold the whipped egg whites into the batter to lighten the batter. 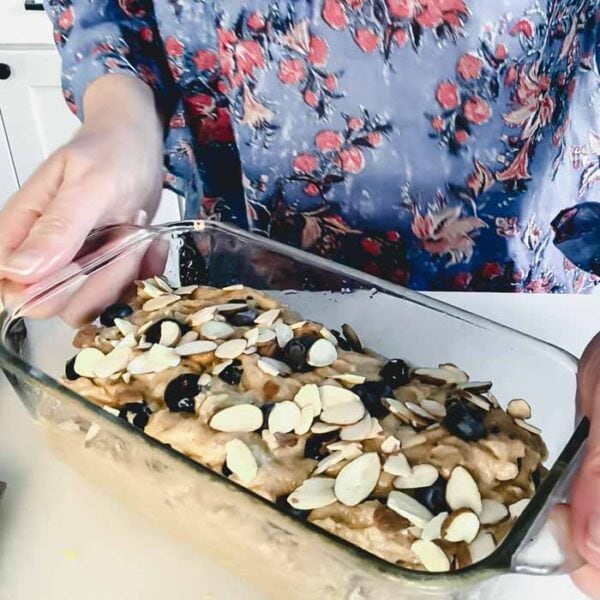 6. Top the batter with blueberries and almonds before baking.

Thank you so much for reading. If you like this recipe, please come back and leave a review and star rating! And if you are new here, you may want to sign up for my email newsletter or join the conversation over on Instagram.

This Healthy Blueberry Lemon Bread is sweet and lemony and bursting with blueberries. It is made with whole-wheat flour and is lower in sugar and fat.

To prevent the bread from collapsing, set the timer for 55 minutes and then check it. If a toothpick comes out with batter on it, keep baking for another five minutes. Then check again. Checking too often will allow the temperature in the oven to fall and the center of the loaf will collapse. 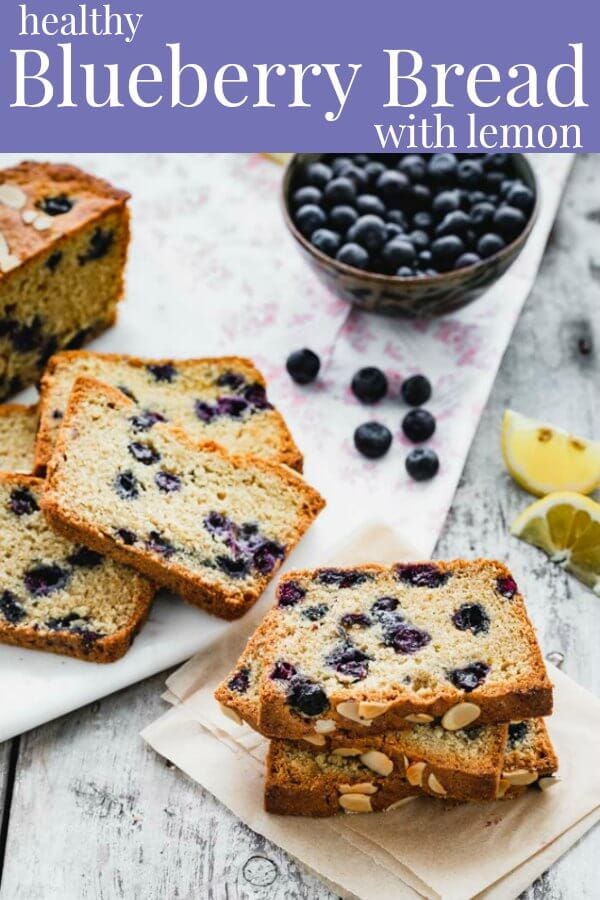