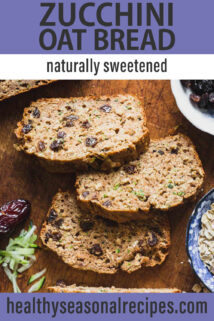 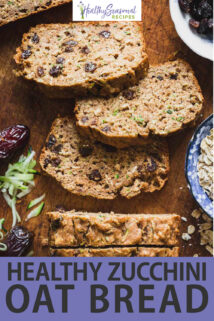 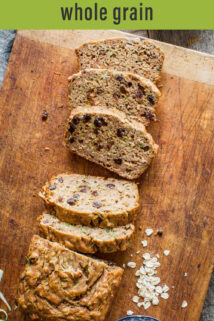 This Healthy Zucchini Oat Bread is packed with zucchini and sweetened with dates raisins and a touch of honey instead of refined sugar. The oats make it sturdy enough to pack in a picnic basket or lunchbox. 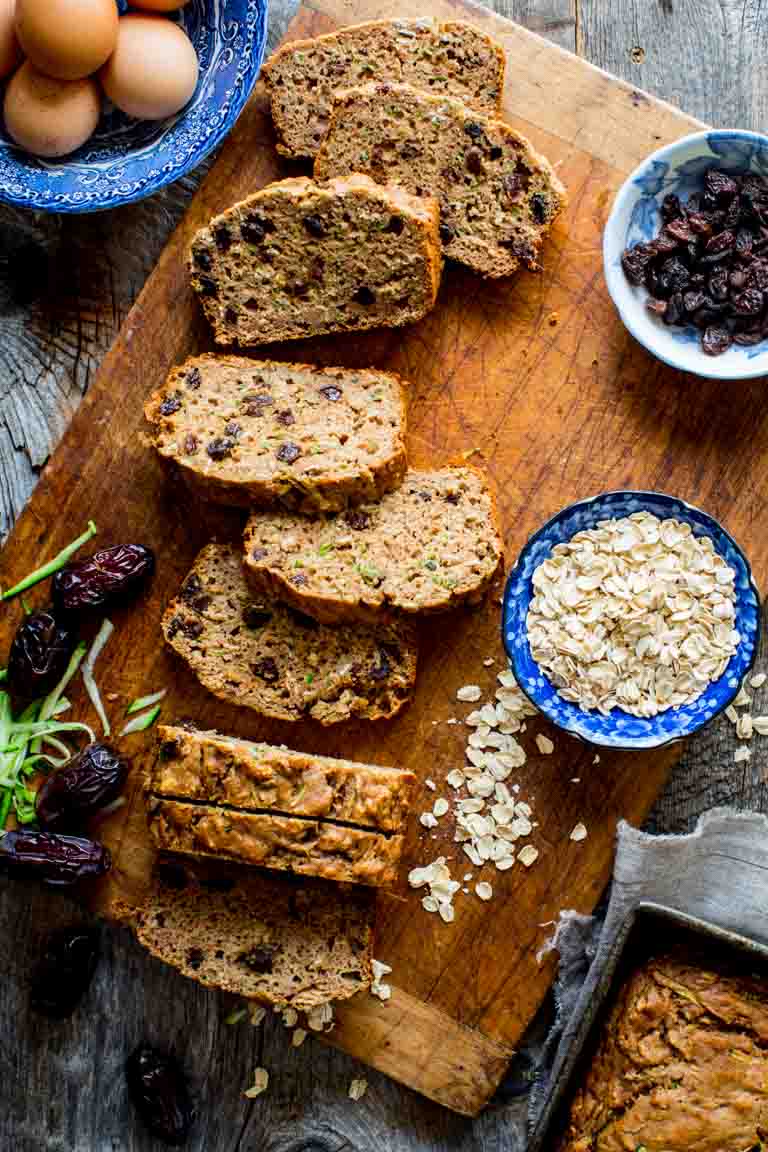 I originally shared this recipe on September 5, 2012. I have updated the images and some of the text today.

Have you ever noticed a lot of recipes for zucchini bread don’t really call for that much zucchini? I sure have. On its surface, making zucchini bread seems like an excellent way of using up lots of zucchini. But in reality, a lot of recipes only call for 1 cup! That’s hardly enough to make a dent in the excesses of the ever-present green giants this time of year. I mean seriously, what’s the point? You’re not even going to get much of a health benefit from such a meager amount. So I set out to make a recipe for zucchini bread that would use up a significant amount of zucchini. 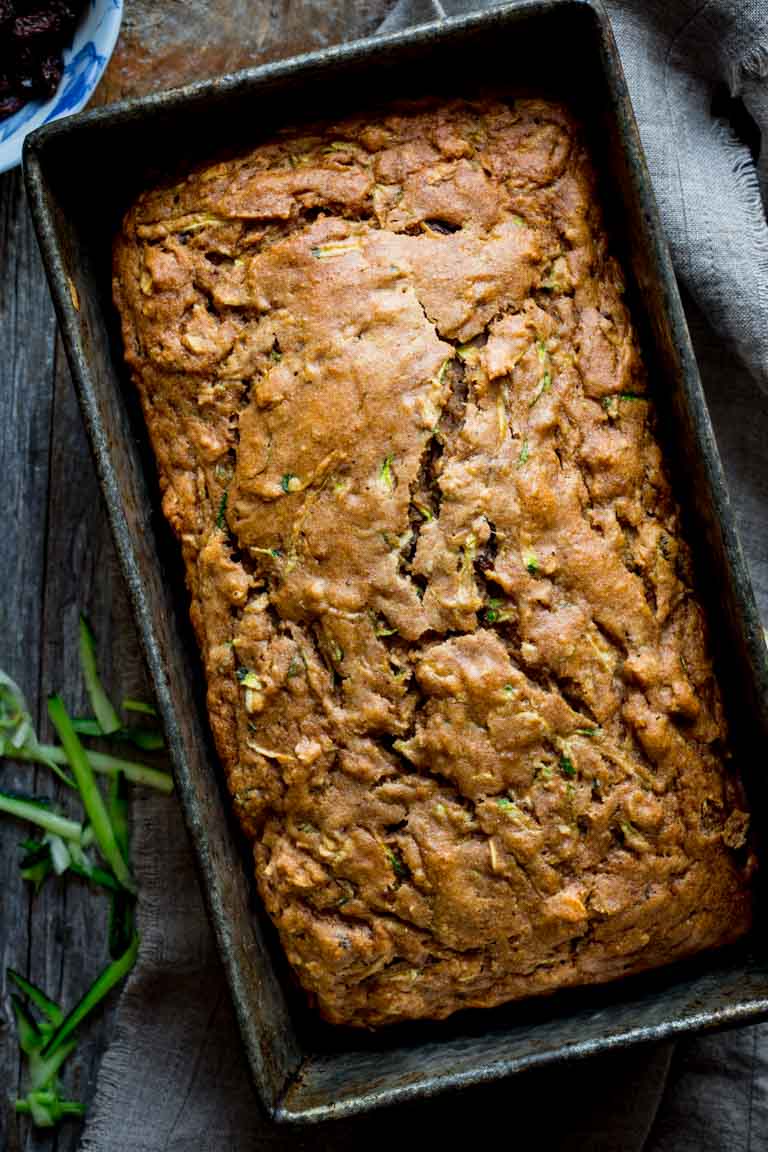 I’ve pretty much signed up for a lot of testing when I take on developing a baking recipe, so I knew I better make it worth my efforts. That’s why I added on some other important criteria. I wanted this zucchini bread to be:

As it turns out, I did have to test it a whole bunch of times. But happily, the recipe I ended up with satisfies all of my criteria. 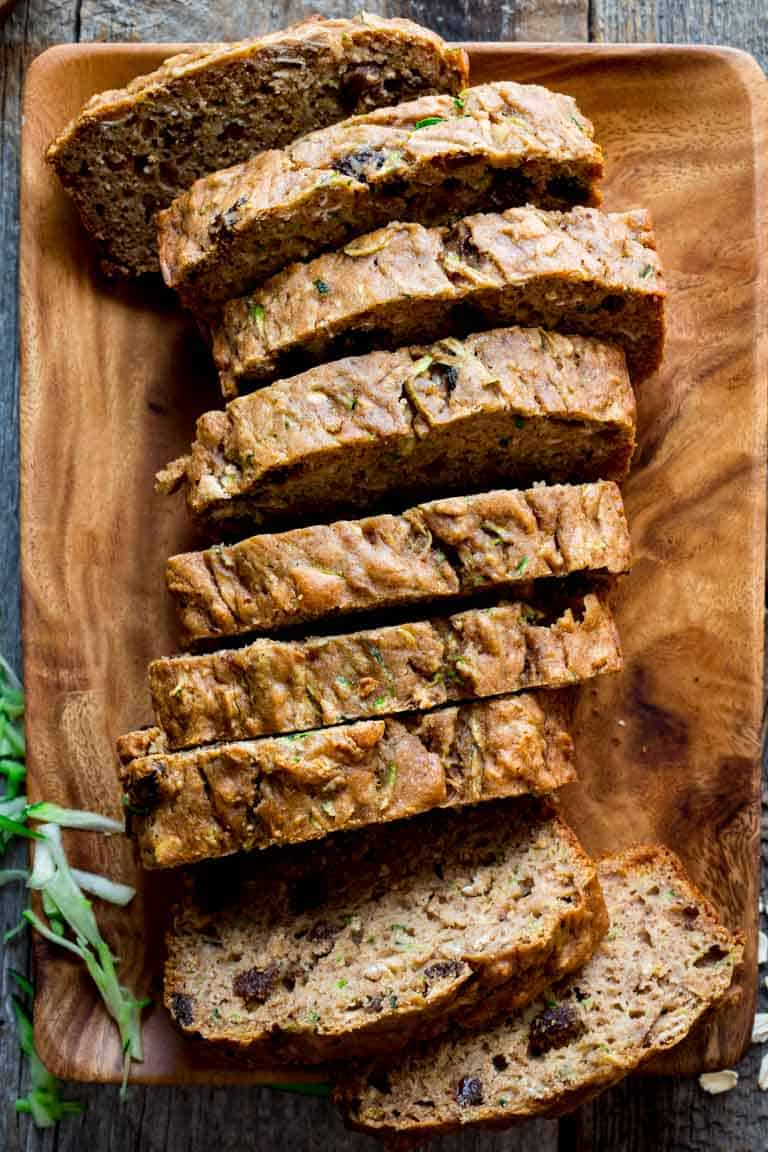 Here’s what I did. I wanted to be able to freeze slices of the loaf so my daughters could pack them in their lunch boxes. To make the slices sturdy enough to handle the freezing and thawing and jostling I added oats. The oats helped make the slices more dense, higher in fiber, and they absorbed some of the moisture which actually helps keep the bread nice and moist. 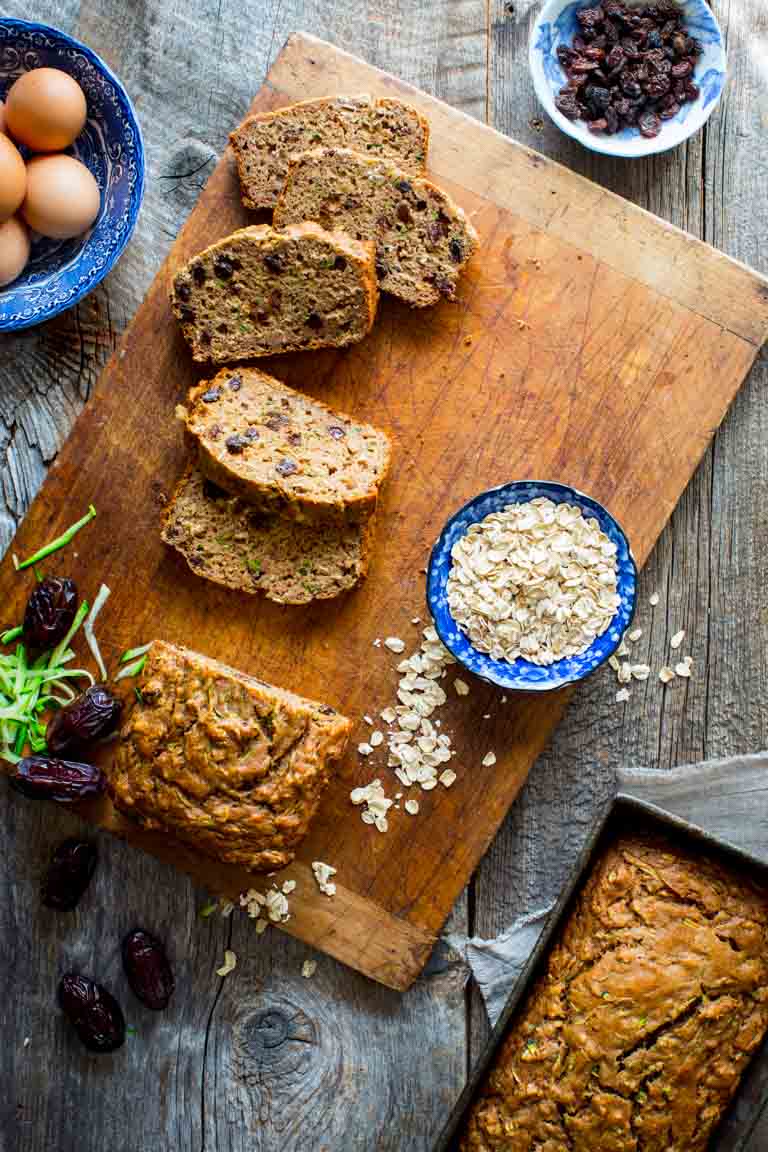 I was able to sweeten the bread with softened and pureed dates, which are naturally sweet but low-glycemic and high in fiber. To that, I added only 3 tablespoons of honey, and a cup of raisins, which gives the bread a nice natural sweetness. [Enough so that my girls asked for another slice for dessert last night!] Considering that even healthy zucchini bread recipes call for at least ¾ cups of sugar, I consider this a real success. 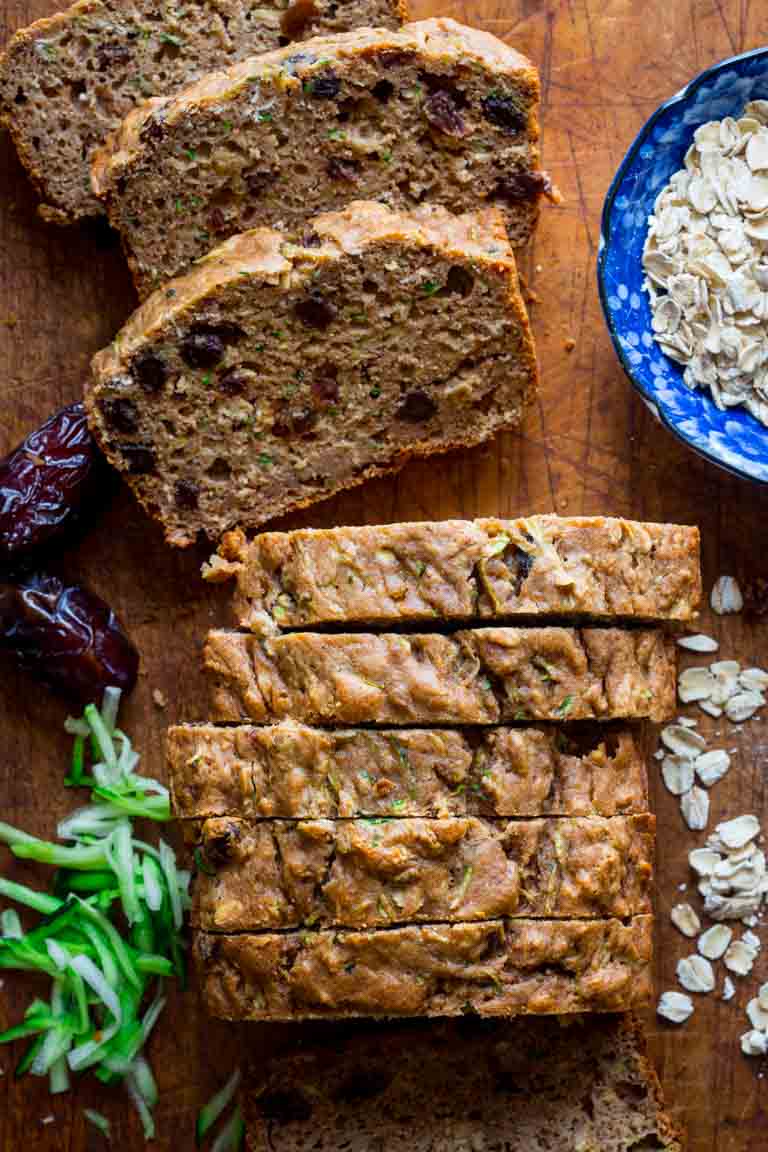 As with many of my baking recipes I used organic oil instead of butter. And I called for whole grain flour instead of all refined. This time, I used white whole-wheat in a ratio of two-to-one with all-purpose flour. The flavor is not overwhelmingly wheaty and the loaves rose into pretty golden domes. 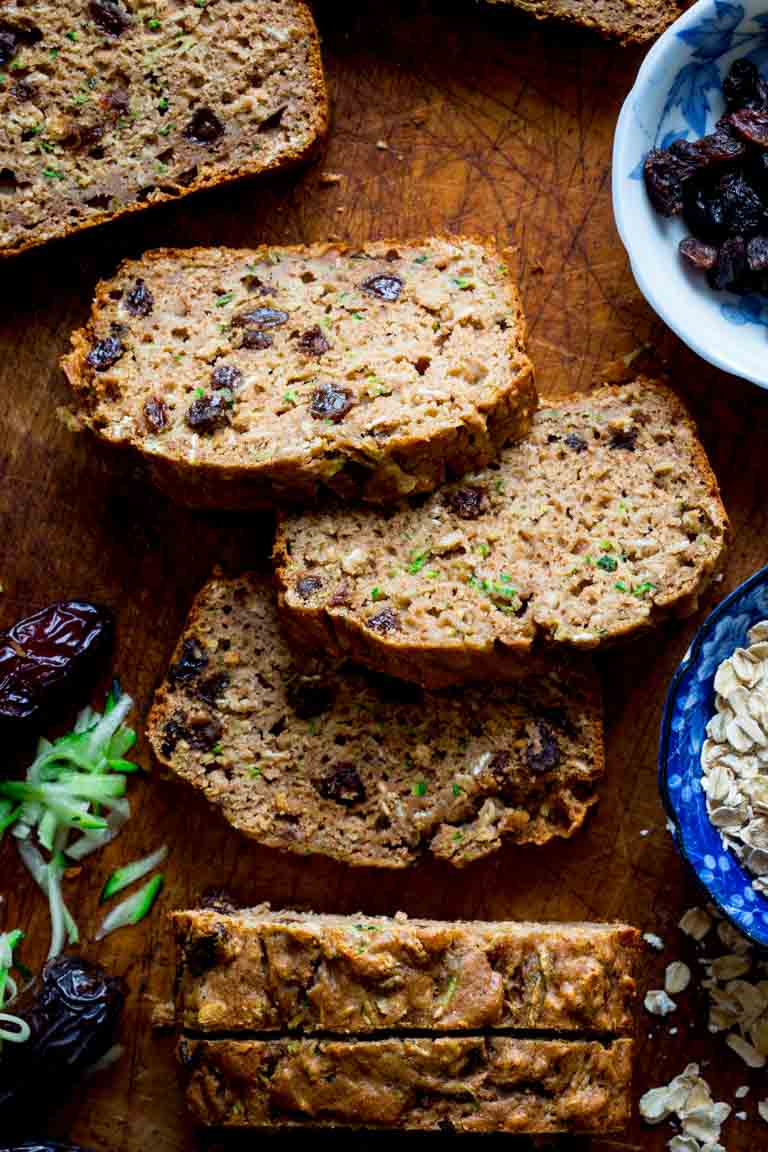 And finally I was able to get in a whole pound (almost 4 cups) of zucchini for two loaves. That’s about twice of a lot of other recipes. Combined with the raisins and dates, that much zucchini will help to get those produce servings in. And perhaps more important it will help to make a dent in the piles of zucchini in the refrigerator. {But if you are still swimming in zuchs then you could always make a Cheesy Zucchini Casserole.} 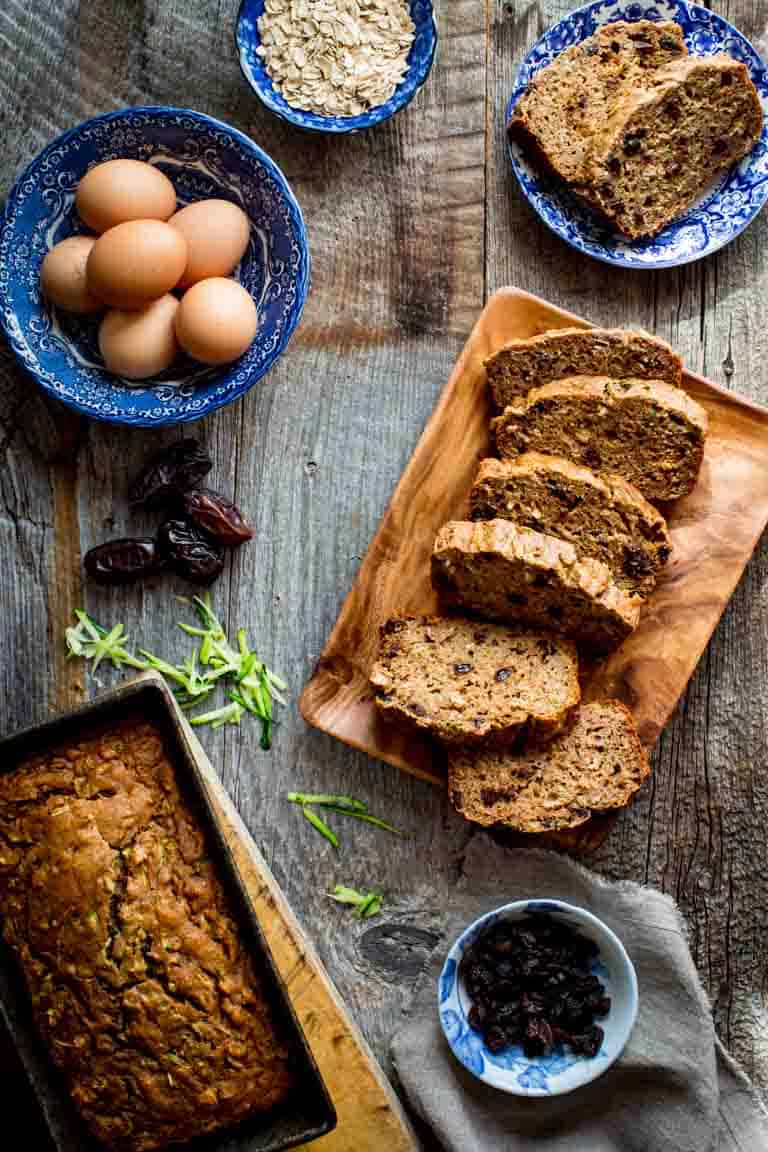 This Healthy Zucchini Oat Bread is packed with zucchini and sweetened with dates raisins and a touch of honey instead of refined sugar. The oats make it sturdy enough to pack in a picnic basket or lunchbox.

To make ahead: Wrap slices of bread in plastic wrap, transfer to a large re-sealable freezer bag and freeze up to 1 month. Defrost in microwave for about 20 seconds or at room temperature.

Here are the original images associated with this blog post. 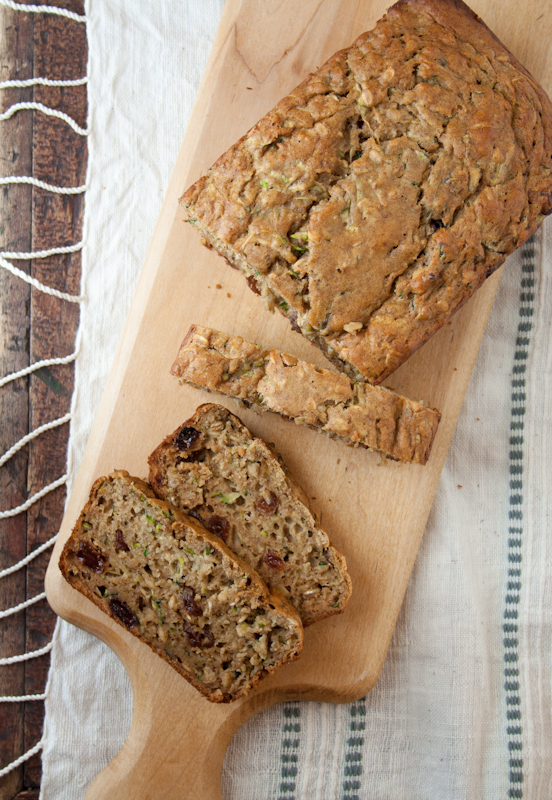 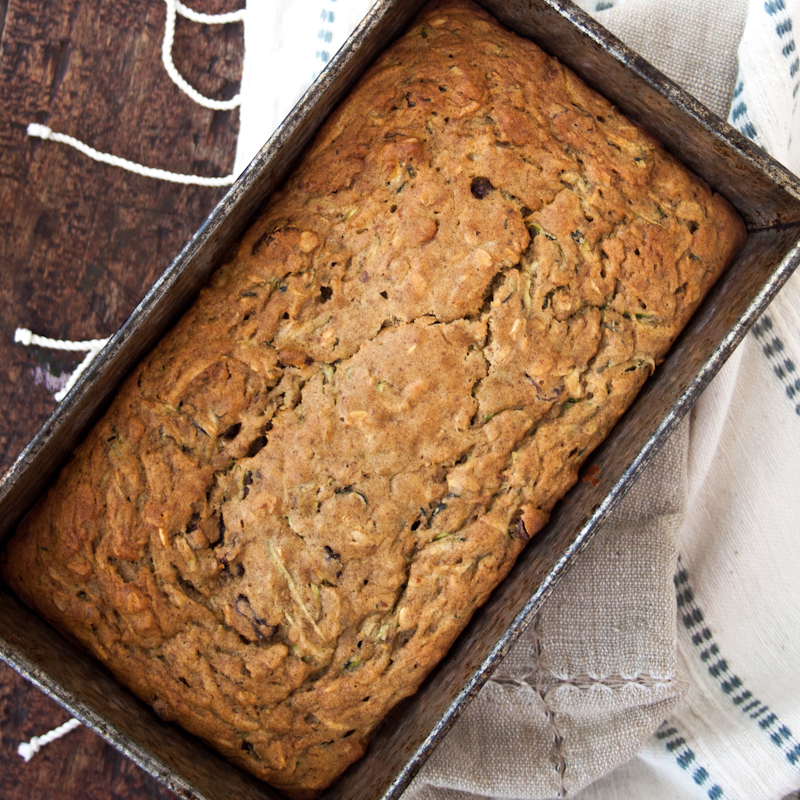 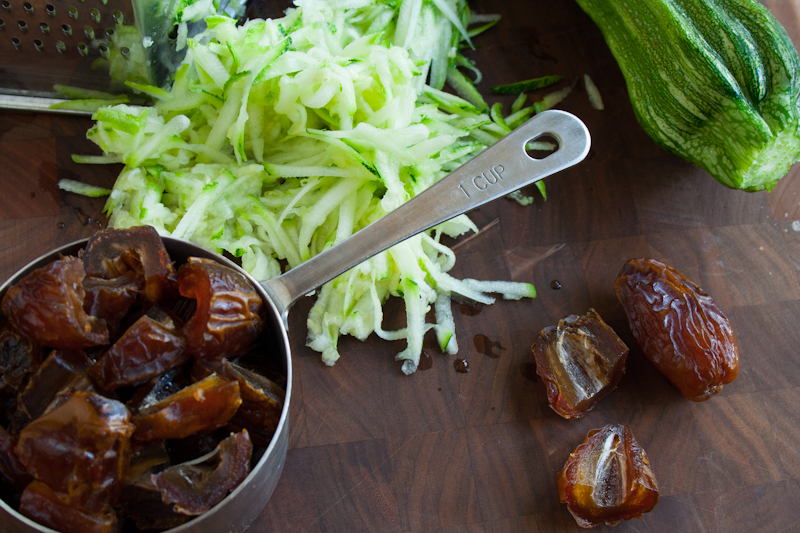 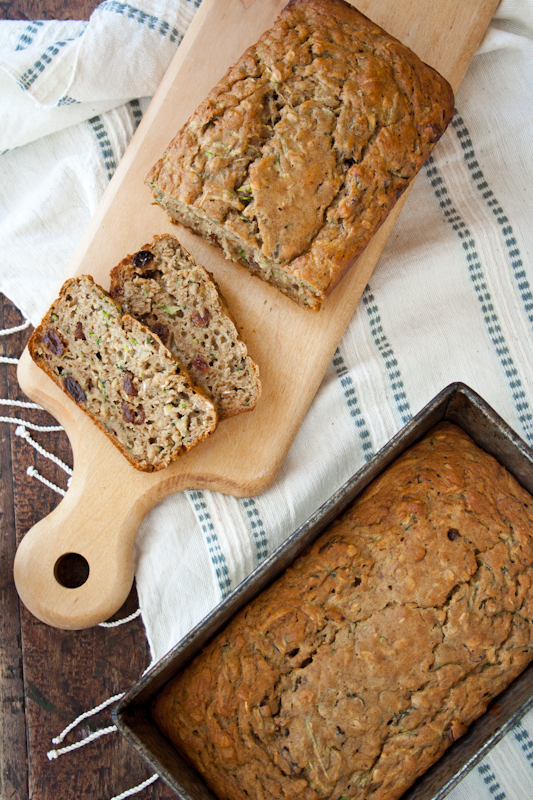 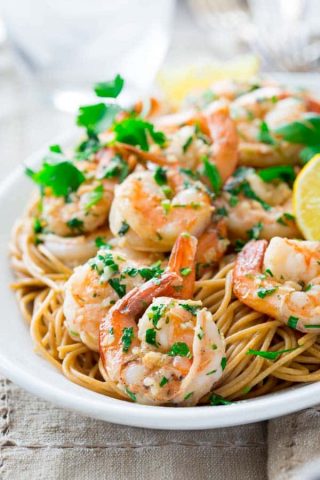 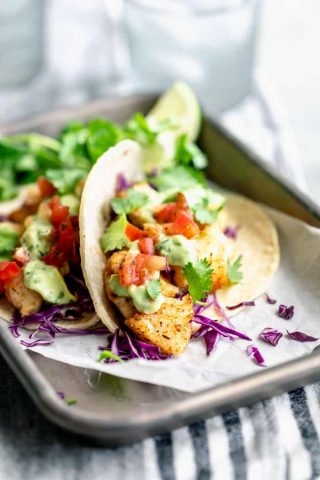