Chocolate lovers unite!! This Cherry Almond Chocolate Bark is delicious and easy to make after a quick lesson on tempering chocolate. Take a moment to read…it is not as hard as you think and the results are well worth the effort! 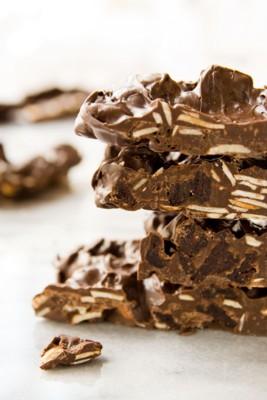 You know what makes chocolate so amazingly delicious? For one thing, Cocoa Butter (one of three primary components in chocolate) has thirty-one different fats in it. And each one of those fats melts at a slightly different temperature. All of which are right around body temperature. Starting at about 91 degrees F to be more precise. So, when you put a piece of chocolate in your mouth your body heat slowly melts all those fats and you’re in creamy chocolaty heaven. 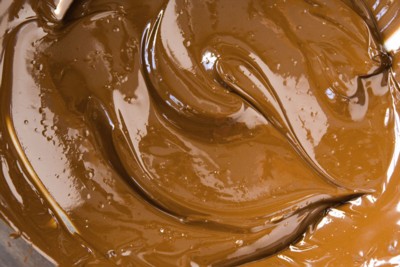 Unfortunately, it is exactly all those different fats and their various melting points that make chocolate such a tricky ingredient to cook with. That’s why I felt the need to write about (the giant can of worms that is) how to temper chocolate. When I decided I’d take it on, I knew it would be one of those posts where I’d feel compelled to pull out my old notebooks from culinary school, grab a copy of Harold McGee’s On Food and Cooking and get all food sciencey. 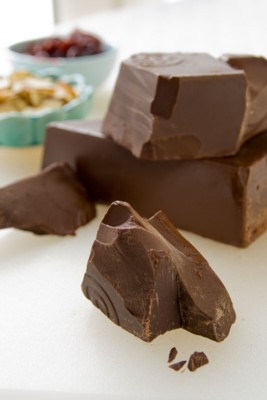 So to begin it is important to understand what it means to temper chocolate. Tempering chocolate is to melt chocolate and then to bring it to a stable working temperature while keeping the cocoa butter fats from separating out.

Here’s the key: Chocolate is an emulsion. An emulsion as described by the food lover’s companion is “A mixture of one liquid with another with which it cannot normally combine smoothly — oil and water being the classic example.” Some emulsions like chocolate and butter are solid at room temperature.

There are three main methods of tempering chocolate. The first is the tabling method, which I’m not going to discuss because although it is arguably the best method, I don’t have a marble countertop. You probably don’t either. 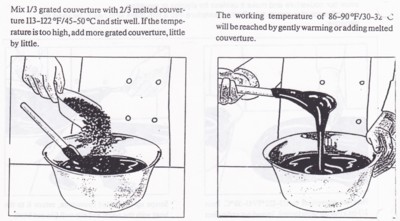 The second is the vaccination method. Here is a handy illustration I found in my culinary school binder, author/artist uknown, if you want to try that method. That is a good method if you don’t care how much melted chocolate you end up with. The microwaving method or partial melting method is essentially a variation of the vaccination method. I really don’t like that method because it is so temperamental, no pun intended. 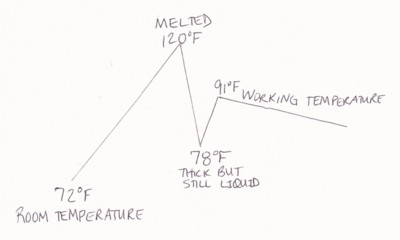 It starts off at 72 degrees F and gets heated to 120 degrees F to melt it. Then it is cooled to 78 degrees F, while stirring over an ice bath to re-emulsify the fats. Then it is gently reheated to no higher than 91 degrees F to get it to working temperature. That’s when you can add ingredients for bark, drizzle it over cookies or dip fruit in it. 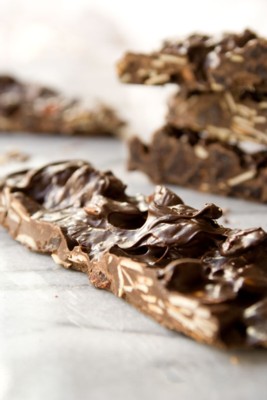 So here is my step-by-step photo tutorial of the ice bath tempering method. 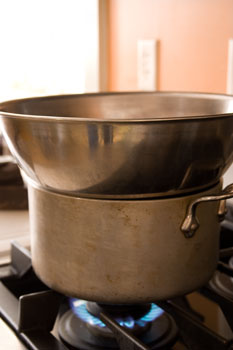 First you need to make a double boiler. I don’t have an actual store-bought double-boiler, so this is how I improvise one. I just set a heat-proof metal bowl over a large saucepan of water. You only need an inch or two of water in the saucepan and it is important the bottom of the bowl doesn’t touch the water. Put the saucepan on to boil. Then reduce the heat so that it is at the barest simmer. The gentle steam of the double-boiler is less harsh than direct heat.

Then you’ll want to set up your work area. You’ll need an ice bath. Fill a big bowl about half way with ice and water. Obviously, the ice bath bowl needs to be bigger than the top of the double boiler. 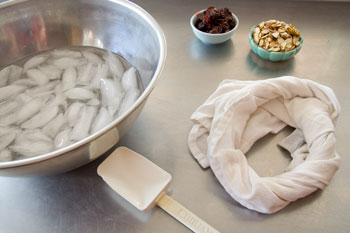 Also next to it you’ll need a spot to stir the chocolate off the ice. To keep the bowl from slipping around, you can put a non-skid mat there like a square of shelf liner. Or even better is a dish towel twisted into a circle. I like the towel because it dries off the bottom of the work bowl. That’s important because water is chocolate’s enemy. A single drop added to the melted chocolate will cause the whole mass to seize. 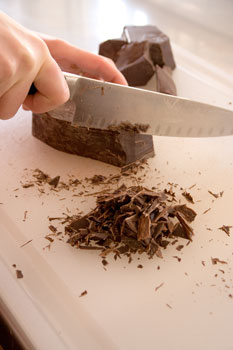 Once your work area is all set, if you’re making bark, toast the nuts so they have a chance to cool. Then you can chop the chocolate into fine evenly sized pieces. That way they’ll melt at roughly the same rate. Add the chocolate to the bowl (or the top of the double boiler) and then place over the simmering water. 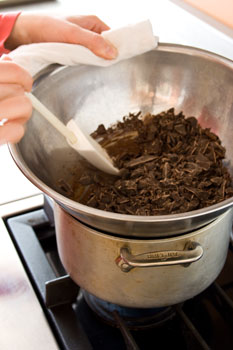 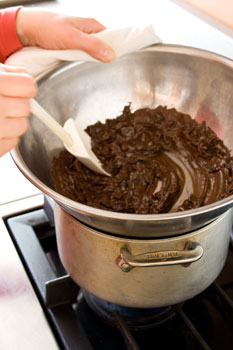 Immediately begin stirring with a heatproof silicone/rubber spatula. You don’t want to beat the chocolate because you’ll incorporate air bubbles. 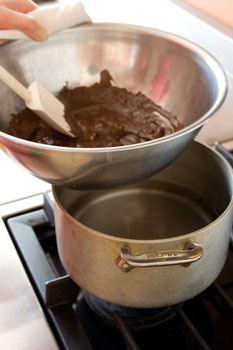 If the steam builds up under the bowl, lift it off for a second and allow it to escape. The whole melting process takes about three minutes. 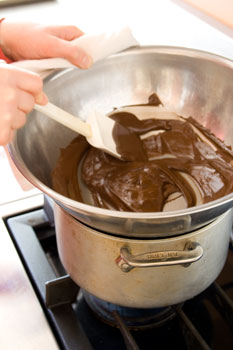 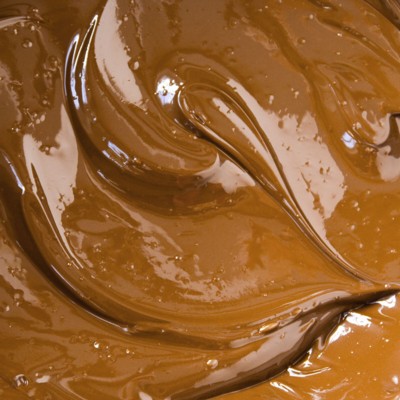 It is better to take it off when there is just a lump or two left, and then continue stirring it off the heat. That will allow the carry-over heat to melt the chocolate the rest of the way without going above the 120 degree F mark.

Once it is completely melted you can begin bringing it down to 78 degrees F. Place the bowl of melted chocolate over the ice bath and stir until a thin layer of the chocolate solidifies to the bottom of the bowl. 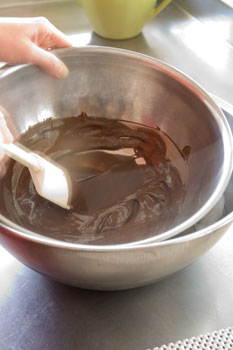 Move the bowl to the towel and stir until the chocolate on the bottom of the bowl melts. 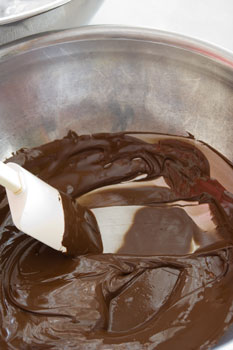 Return the chocolate to the ice bath, and continue gently stirring until there is a thin layer of solid chocolate on the bottom of the bowl again. Repeat transferring it to the towel, stirring constantly until the chocolate melts again. The reason you do this back and forth business is that you are looking for the chocolate to behave in a way that you’ll know that it is about to hit the 78 degree mark. 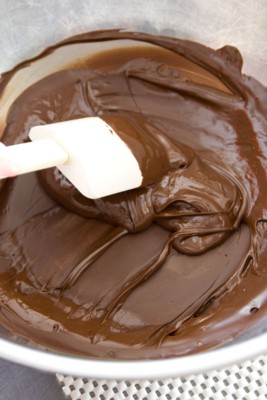 Look for these signs:

When you see those signs, that means it is about to get solid, so you’ll have to quickly get it back over the double boiler to take it to 91 degrees F. Don’t forget to stir. 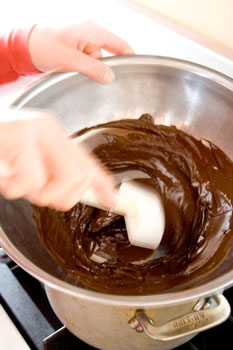 Then as soon as it softens and loosens up/melts over the double boiler, take it off the heat and stir it until it is smooth and even. Then you have stable, tempered, working-temperature chocolate. And you can make this cherry almond chocolate bark! 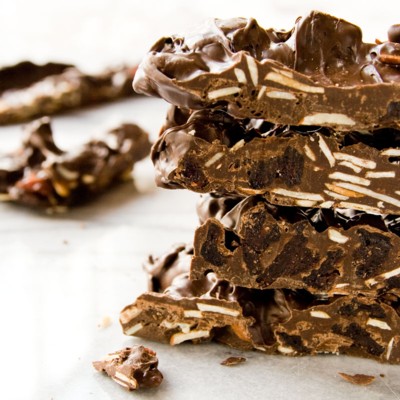 As soon as you add the ingredients for the bark the temperature of the chocolate will drop and it will solidify quickly. So when you are making bark make sure to have your “landing pad” in this case a sheet pan, ready to go. 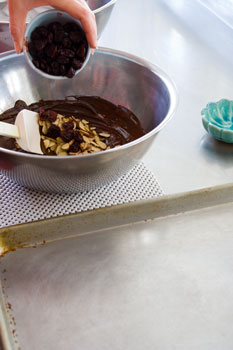 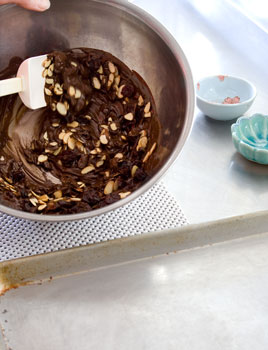 Stir in the dried cherries and nuts, stir to combine. 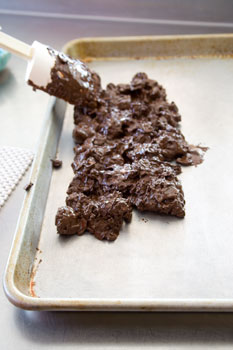 Quickly, spread out on the sheet pan to a rough rectangle shape about ½-inch thick. Allow it to cool at room temperature. It should solidify in 10 to 30 minutes depending on the humidity levels and temperature of the room. If it is very hot or humid it will take longer. Then just cut it into strips and break into big chunks. 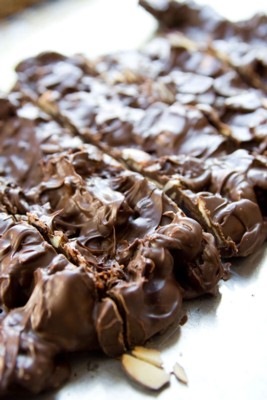 To make ahead: Store at room temperature for several weeks (if it lasts that long.)

Chocolate lovers unite!! This Cherry Almond Chocolate Bark is delicious and easy to make after a quick lesson on tempering chocolate. Take a moment to read…it is not as hard as you think and the results are well worth the effort! 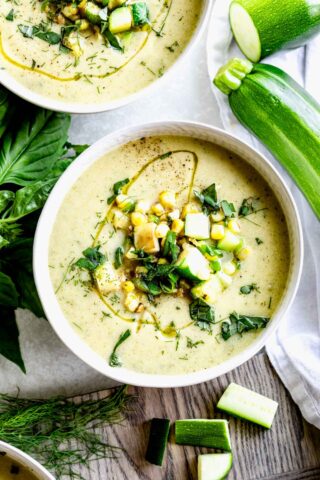 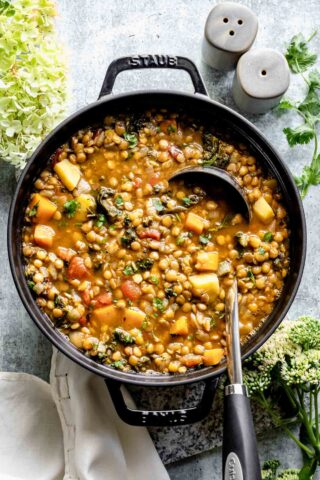