Home » in the kitchen » produce spotlight » The Ultimate Guide To Corn

The Ultimate Guide To Corn

Corn’s sweet flavor and handheld ease make it a summertime staple and favorite with everyone old and young alike. It has countless uses and is cultivated across the world. In this month’s Produce Spotlight we are sharing our Ultimate Guide to Corn. We will provide our favorite late corn recipes, discuss the crops’ unique origins, and share tips so you can grow your own.

Corn, also known as Maize in some countries originated 9,000 years ago in Mayan civilizations. It is a member of the Poaceae family and its scientific name is Zea mays.

According to an article by Farm Together, corn is thought to have been domesticated from a wild grass called teosinte, which was hard and inedible.

After years of selective breeding and planting, corn soon became a staple in early Mayan farming and culture. The cultivation of the crop spread further to populations across North and South America and continued to become a significant player in the modern U.S. and global agriculture sectors

There are early, mid, and late-season varieties. It is crucial to choose a type that matches your region’s growing season. The sugar content alters the plant’s characteristics as well.

Soil conditions are crucial for good growth. It must be at least 60°F, drained but able to hold some moisture. Adding aged manure, compost or fertilizer will aid in the growing process.

Harvest when cobs bulk up and tassels turn brown. This typically happens 60-100 days depending on the variety. To harvest, simply pull the ear down and twist it off of the stalk.

Learn more about growing your own from The Old Farmer’s Almanac.

According to the nutrient profile from the USDA’s Food Data Central, corn has the following health benefits

Sweet Corn is a starchy vegetable with 20 grams of carbohydrates in a 1/2 cup serving. If you follow a low-carbohydrate diet, you may want to limit your intake of corn.

Being a commodity crop, a lot of US-grown corn is GMO. The GMO corn is resistant to pests and can tolerate herbicides, however, it does not harm beneficial insects such as ladybugs and pollinators.

GMO corn is non-toxic to humans and livestock and the majority is processed into corn syrup, or used for animal feed.

Learn more about GMOs and their effects from The FDA.

The reason you may see undigested corn in your poop is due to the high cellulose content in the kernel’s outer wall. Cellulose is an insoluble fiber that is not broken down during digestion, however, all the internal components of the kernel are fully broken down.

Can corn be frozen for a later date?

Yes, it can easily be frozen and does not need to be cooked beforehand. You can freeze full ears that have been shucked or you can freeze kernels that were cut off. Simply place the corn into an airtight bag and pop it in the freezer.

What is the best way to control disease and pests when growing corn?

Corn is susceptible to diseases such as leaf wilts, blights, and even rotting. The best way to control disease is to rotate your crops each year, keep the area weed-free and remove any plant debris/residue from the growing area. The plants can also attract pests which will minimize your yields. Using a fungicide solution of Bacillus thuringiensis kurstaki (Btk) and mineral oil on the corn after the silk has formed will help prevent pests.

What is the difference between field and food corn?

The majority of corn grown is field corn. Their kernels and starches are processed into various products. Based on USDA data, a rough 40% is turned into fuel and the leftover co-product from ethanol production is used for livestock feed. Corn syrup is made from a specific type of field corn called #2 yellow dent corn.

The sweet corn that we eat only makes up a small percentage of production. Other food varieties include popcorn, a variety with a small amount of water, and white corn, which has a harder starch and is used to make corn chips and tortillas. Learn more about food corn from ​​The Nebraska Corn Board.

If you have ever had freshly picked raw corn, straight from the cob, then you know fresh corn is best! It doesn’t need much to make it great. Our favorite ways to use it are to boil it, cut if off the cob and to grill it. Read below instructions for each.

How To Boil Sweet Corn

How To Cut Corn Off The Cob

Grilling the corn after it is shucked gives great smoky and charred flavors.

To Grill Corn in Husk

Alternatively you can grill the corn in its husk by soaking the corn in room temperature water for at least one hour. Note that the silk can burn so it is best to trim it off before grilling. Grill the corn, with the lid on, turning once or twice for 15 to 20 minutes. Carefully peel the corn and enjoy! 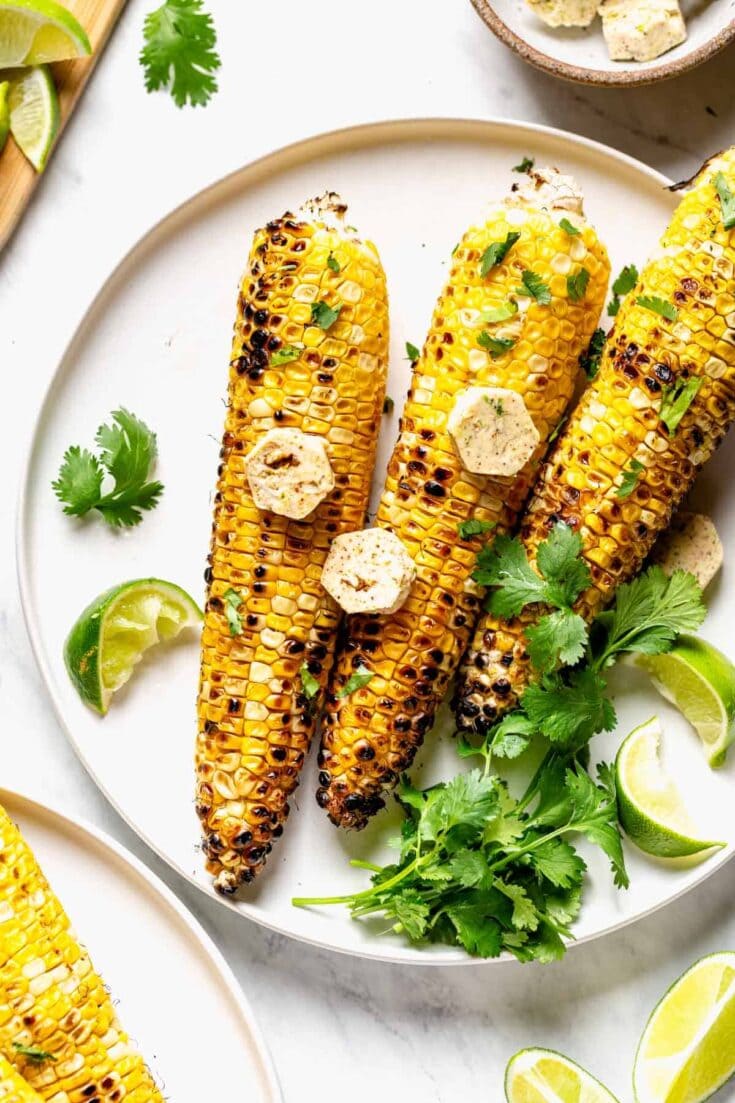 Zest up a classic favorite with Lime and Chipotle Chili. This will be a hit at your next BBQ or cookout. 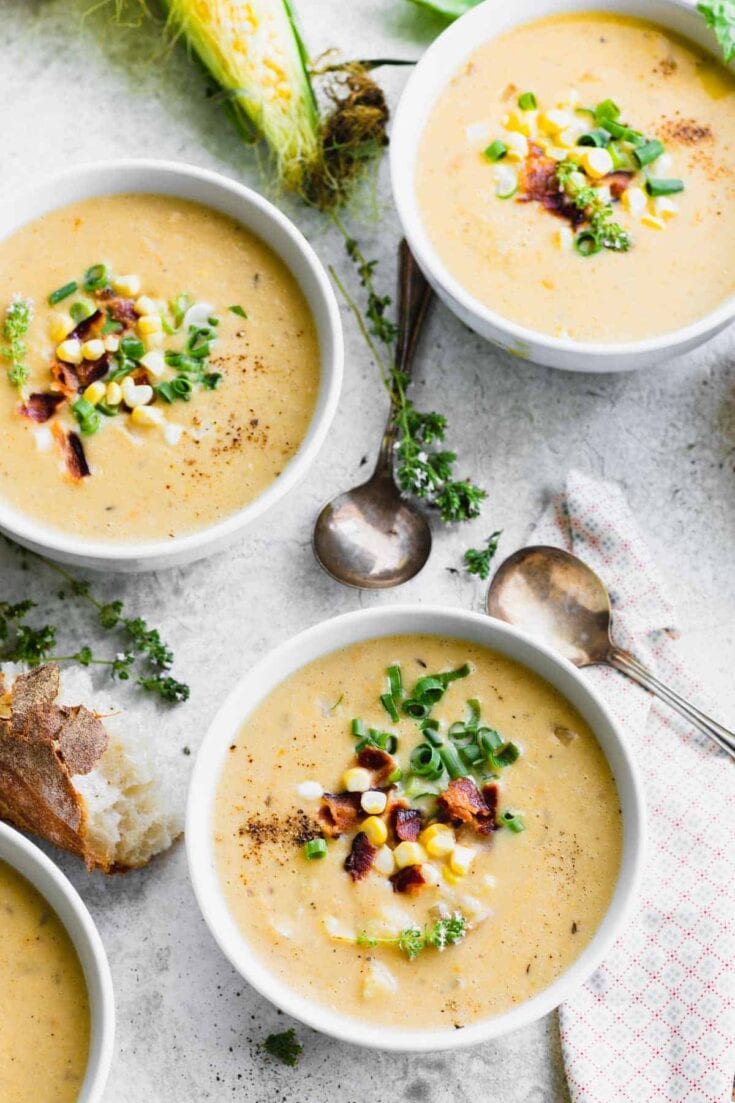 This Corn and Potato Chowder is a great homemade hearty soup. This healthier version is thickened by pureeing some of the corn and potatoes instead of using flour, so it is lighter and naturally gluten-free. 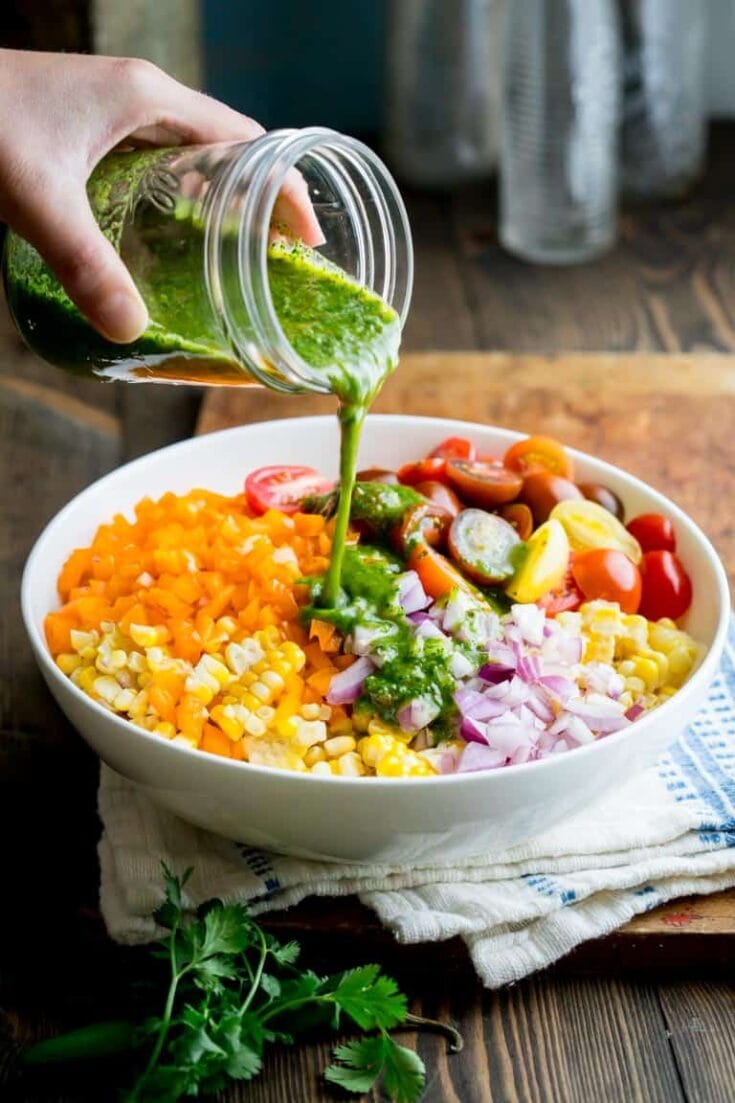 This Mexican Corn Salad is full of color, flavor, and totally vegan. The Jalapeño and Cilantro Dressing is the perfect complement to the corn’s sweet taste. 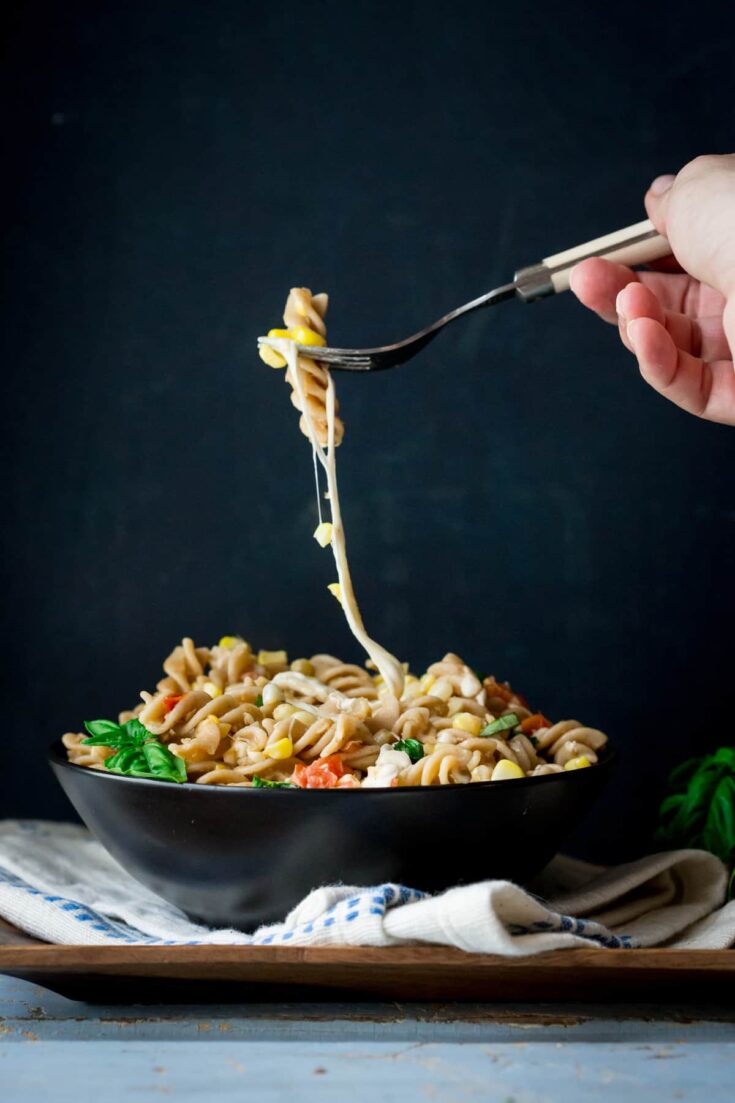 pasta with corn and smoked mozzarella

This Pasta with Corn and Smoked Mozzarella with lots of garlic is both sweet and smoky and is a great vegetarian dinner to make in under 30 minutes. 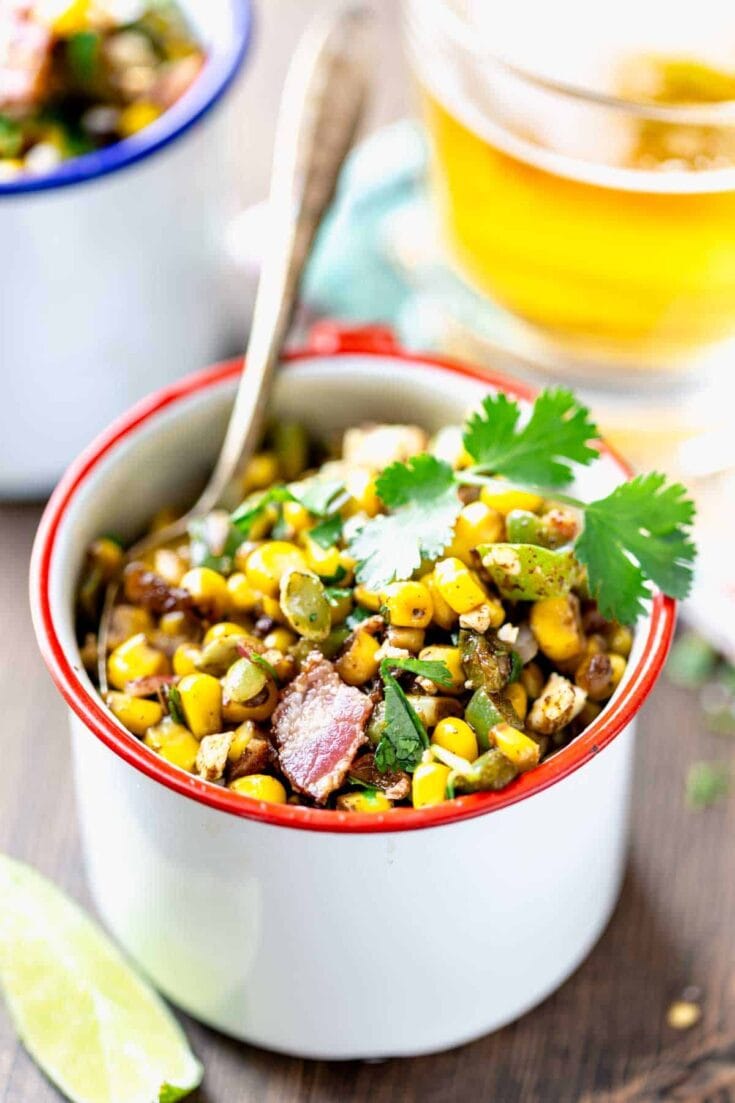 Mexican Street Corn Off The Cob

An enhanced, one-skillet version of street corn. This spin-off of Street corn features savory additions like pepitas and bacon. 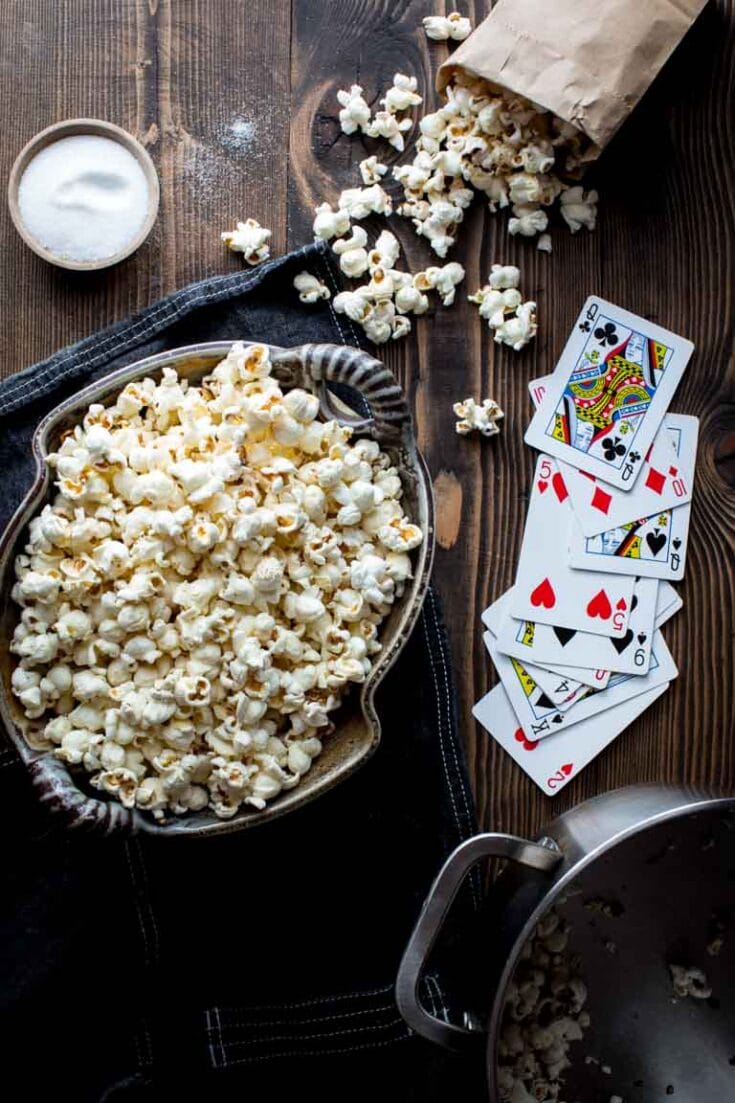 Skip the bagged popcorn and try this healthy homemade version during your next movie night. 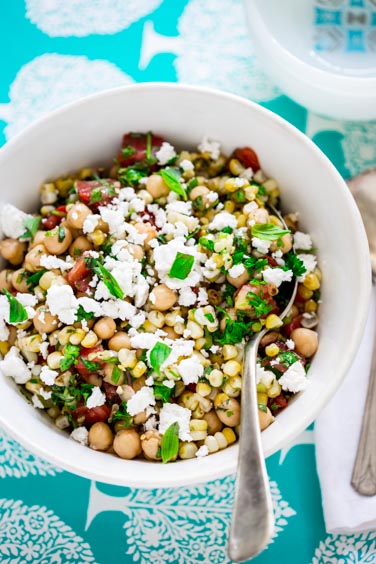 This Chickpea and Corn Salad is gluten-free, full of nutrients, satisfying, and can be vegan. Enjoy all the flavors of summer in one bowl 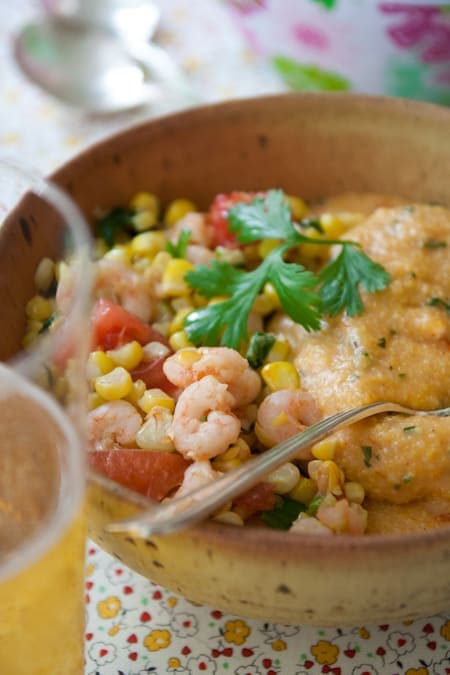 shrimp and corn with cheese grits

A slightly unconventional yet very comforting meal made in under 30 minutes. Flavors from the South and New England combined into a hearty breakfast. 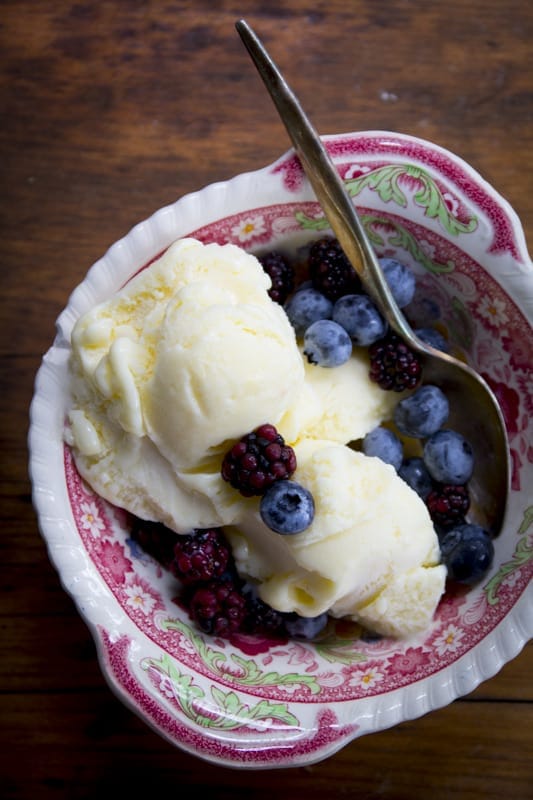 Corn and ice cream? Trust me it is delicious and your family will love this dessert. 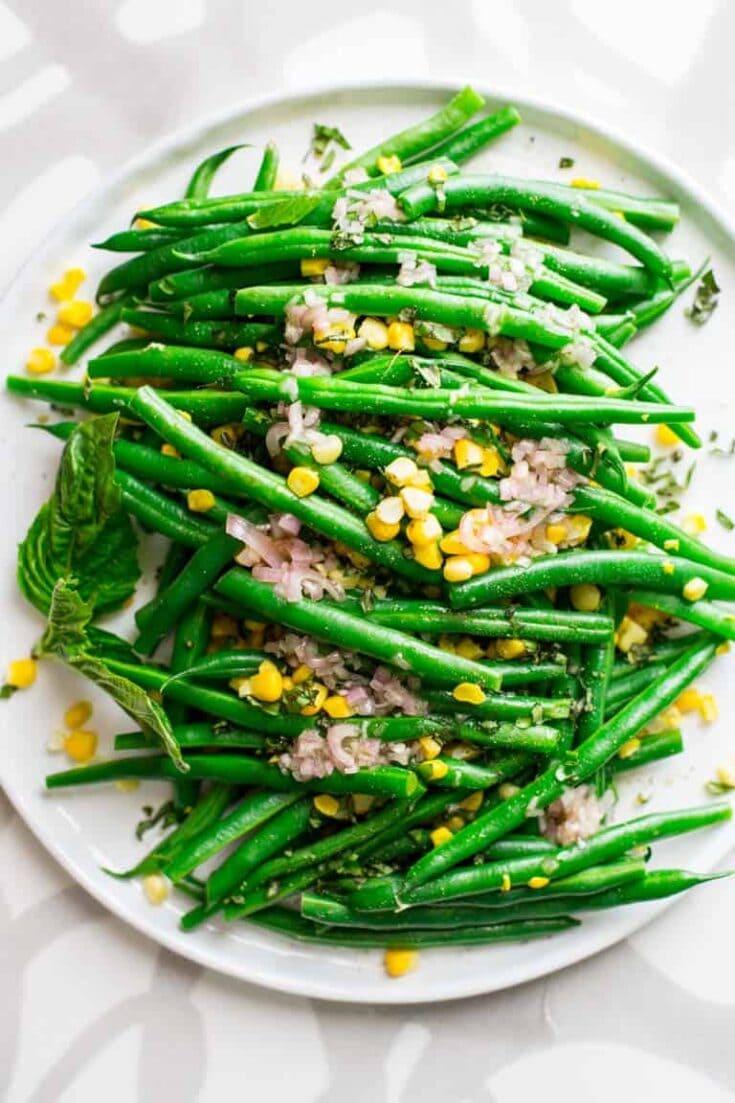 A simple dish that showcases two veggies from your garden. This quick and easy dish will become a summer staple!

END_OF_DOCUMENT_TOKEN_TO_BE_REPLACED
in the kitchen produce spotlight

8 comments on “The Ultimate Guide To Corn”