photo courtesy of Robin Runner of Knead to Cook

I have often joked that the best thing about running is that it gives me time to think about what I am going to cook next. While, it is true that I do spend a disproportionate amount of time thinking about cooking while I run, I am not really serious that it is the BEST part about running. I’d have to say the best part of running is that it has caused me to push myself beyond my comfort zone.
I am a naturally un-fast runner. I’d say my natural pace is about nine minutes and twenty seconds per mile. If I haven’t run for months and I head out for the first run in a while, that is about the pace I strike. And it is also happens to be the pace I hit when I have been running regularly for months too. It just feels comfortable to me. If I don’t push myself to run faster than that, I’ll just stick to that pace. Indefinitely.
I had always just sort of shrugged off my pace and thought, well that’s just me. Maybe it was the fact that I was always one of the last finishers in the 50-yard-dash on field day in elementary school, or that the coaches in high-school always passed me over during try outs. I had told myself it was okay to not be athletic because I was An Artist. “I am not naturally good at sports,” was what I told myself.
Even though fitness has been a part of my life since I was in college, I still never really considered myself an athlete.

Athlete: a person who is trained or skilled in exercises, sports, or games requiring physical strength, agility, or stamina

That’s when running became part of my world– when I was in college—That’s when  I realized that healthy eating alone wasn’t going to help me keep the freshman 15 at bay. By the beginning of my sophomore year that’s when I took up running. That’s also when I got serious about learning more about nutrition. I started to read health and fitness focused magazines and books and payed attention to portion sizes. I lost the fifteen pounds, and I have never looked back. [Well except when I did a semester in Italy and went on a five month pasta and gelato bender, but that’s another story.] 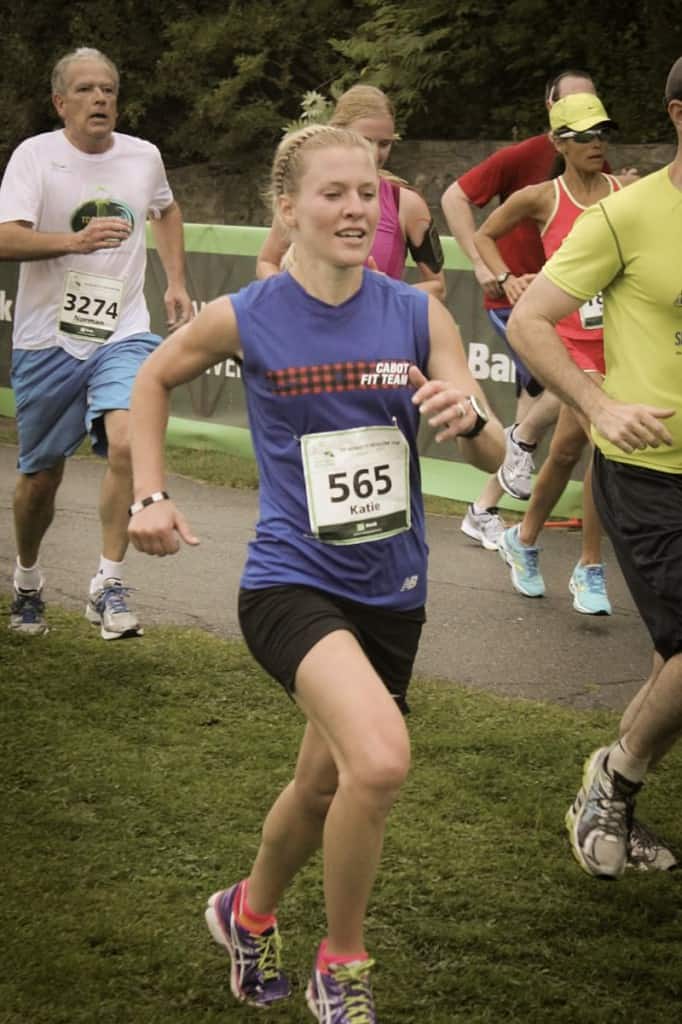 photo courtesy of Robin Runner of Knead to Cook

Now almost twenty years later, I know that beyond weight loss, exercise just plain makes me feel good. It is such a stress reliever! And something else in me has changed as far as fitness is concerned.

I found my inner athlete. And guess what people. I found her outside of my comfort zone. I have a feeling she was there all along, I just had never let myself feel the discomfort I had to go through to find her.

When I first dabbled in road racing ten years ago it was about just plain finishing. I never even paid attention to my times. When I came back to it in my mid-thirties. Now a mother of two daughters, I was a different person and a different athlete. At some point, I realized that I was not destined to be one of the slowest kids at the back of the pack at the fitfty-yard-dash. I realized that I had the ability to change my speed if I pushed. That my speed wasn’t fixed. Simply, if I pushed outside of my comfort zone, for even a few minutes at a time, I would gradually increase my fitness level, get better, faster, improve my pace.

I also realized that in some ways that old me, in high-school, being told I couldn’t compete or be competitive by the coaches, that Katie was afraid of failure. I had been afraid of trying, and not succeeding.

On my first day of culinary school in 1999, the head chef of the school, David Hale, made a welcome speech to all of the new students. He told us that in life it was the difference between being good and being great, to constantly push ourselves. He told us we needed to constantly push the bar farther and farther out as you approached it… To constantly change what we believe to be our limits. 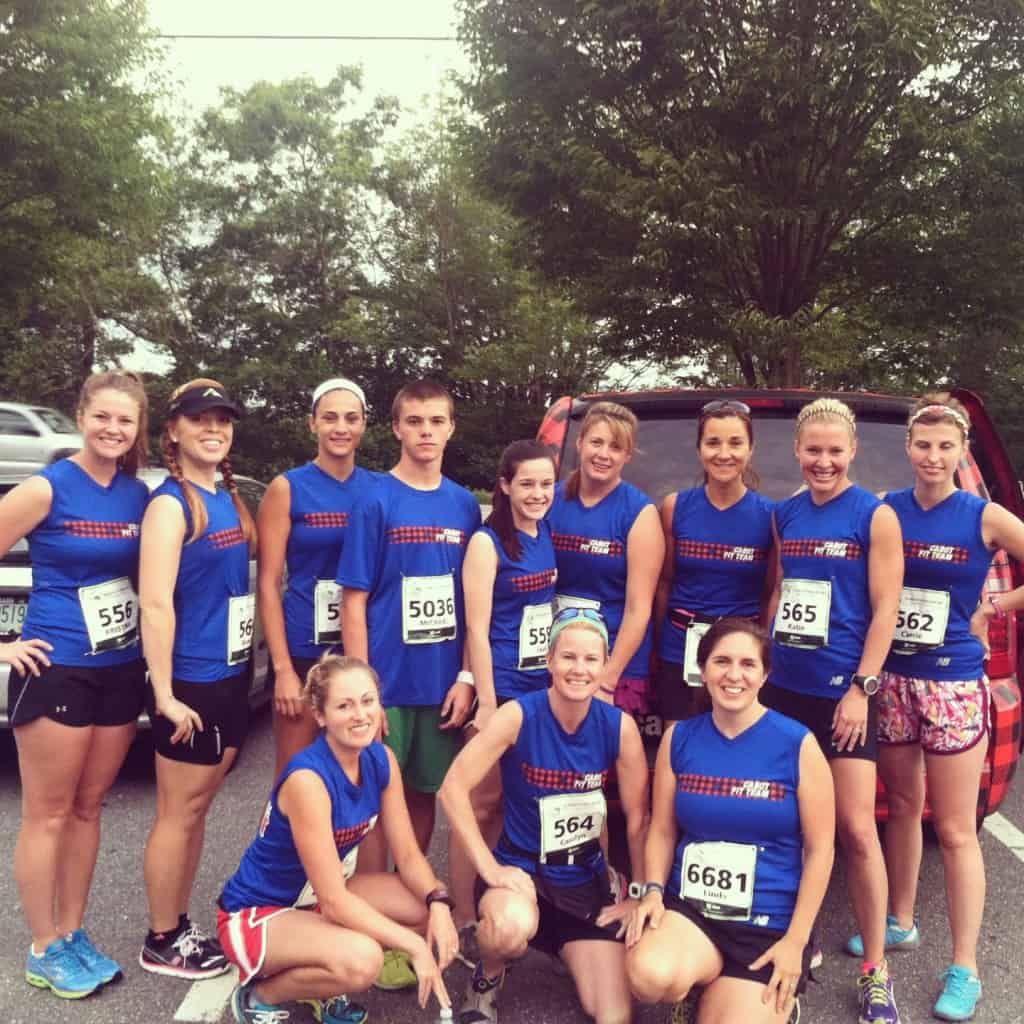 So that brings me to where I am today. I just finished the Beach to Beacon 10K. I was there with Cabot Creamery Cooperative and the Cabot Fit Team. I didn’t even know if I would make the team. I knew I wasn’t a very accomplished runner, and when I filled out the application, I hadn’t been on a run in eight months. But I made it onto the team.

And when I got onto the team, I decided that this would be my first 10k for time. Meaning I wanted to run fast. ie faster than my natural nine-minute twenty second pace. My first and only race that I had run “for time” was a half marathon in May of 2012. I haven’t run much since then. During that race, when I hit the 10k mark, my time was 47:47! Pretty awesome for this former-un-fast-non-athlete-runner! [For the record in that same race I also bonked at about 11 1/2 miles.] So when I found out I was going to get to run in the Beach to Beacon I had hopes that I could be somewhere in that range.

When training for this race began I had that goal in mind. I mapped out a plan. Each week had a formula: One long run on the weekend, one medium-length run and one speed work day. I’d gradually build up to a peak week a few weeks before the race, and then do a little taper.

All was going well until week three or so. That’s when it got HOT! Like crazy hot right? You remember this I am guessing. I felt like such a poo. I could barely eke out ten minute miles. And speed work was like totally out of the question. I started to feel pretty bummed actually.

But it was on July 17 when I realized I wasn’t alone. The whole team was feeling it. We were all in our own home towns, all across the country, all preparing for the same race, and we were all feeling well, un-fast from the darned heat. And that’s when I let go. It was like opening a steam vent on a pressure cooker. I hadn’t realized how worked up I was starting to get about speed and achievement and showing those doubting high-school coaches that I can kick some running butt. I think it was when Carolyn said, “It’s just too hot. If it’s like this on August 3rd, I say we all peel of the race course and find a beach and sip some margaritas!” That was all I needed to suddenly see that for me this race wasn’t about speed. It was about having fun and spreading the word about a healthy lifestyle on behalf of Cabot Creamery Cooperative.

It was about giving a voice and leading the way on behalf of the 1,200+ Cabot farmer members in their commitment to promoting healthy communities.
This race was about meeting all of these amazing bloggers, seeing a beautiful working dairy farm, meeting elite runners (who really were running for speed) and  taking a moment to walk on the beach in Maine. That’s what it was about.

So we all made it to Maine. And we had a lovely day and a half together before race day came. That morning it was cool and lovely. Overcast, and it even misted a bit. Absolutely perfect running weather. I really had no expectations at that point. I knew I hadn’t stuck to my training plan. And I really didn’t know what I was capable of. I figured I would find out once I started running. Monica, the most accomplished runner in our midst, said something really awesome, “I won’t know if it is going to be a good race ‘till I hit mile eight.” Considering this race would be finished almost two miles before that, I got her point. You just can’t have any preconceptions going into the race. My friend Aimee says the only expectation she has on race day is to have a good time.

And that’s what I did. I was smiling a lot. I ran really well. I stuck to about an eight minute mile pace. I was afraid of blowing it all out, and I’d heard there was a big hill at the end. But I didn’t think too hard at all really, I just plain had fun.

The race course is so cool. It is just a simple two lane road that winds from Crescent Beach State Park all along to Fort Williams home of the most photographed lighthouse in the world. And there are spectators all along the course. Highly entertaining ones at that. My brain was a little fuzzy, but I seem to remember seeing a lady in a giant hat with a sign that said “Smile If You’re Not Wearing Underwear!” There is no time to get bored or tired. The finish is sooo exciting. The runners are funneled into a fenced-in chute into Fort Williams. And that’s when I knew I could really go for it. As I approached the finish line I heard the announcer saying “From Richmond Vermont.” And someone yelled, “Go Katie!” It was like I was on fire! I just blasted through the end. I could have kept going. It was the BEST feeling! 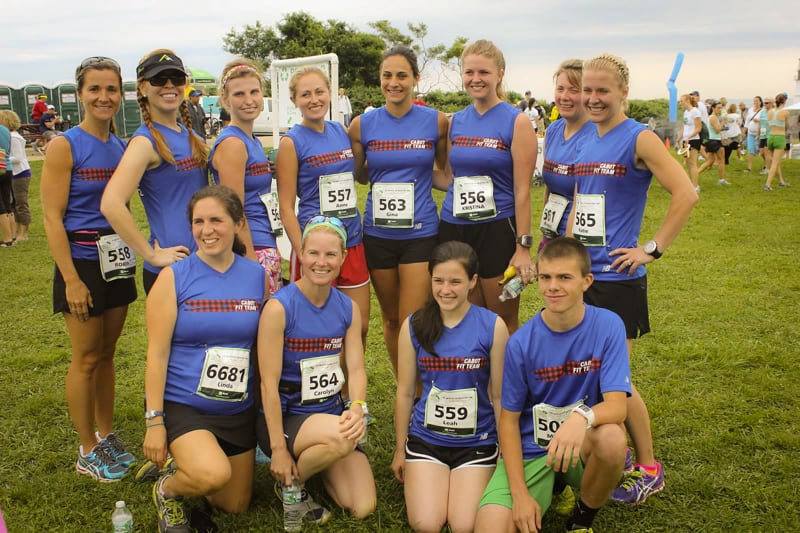 Photo via Knead To Cook

After drinking some chocolate milk, eating some Cabot Sharp Cheddar and a delightful little container of Maine blueberries I headed over to the results board. When I got my final time, 50:09 or 8:05 splits. I had one thought. I want to do that again!

Instead of feeling like it was failure that I hadn’t reached that original goal of 47:47,this is what I thought, “Sweet, I want to do that again. I want to try to get better. I want to see what I can do.” My fitness journey is a continuum. As chef Hale said, I have to constantly adjust what I think my limits are. Improving my fitness is about making changes. It is about not being afraid of failure. And pushing myself outside of my comfort zone. AND it is about being happy and having a good time.

Question: Where are you on your fitness continuum? Has anything in your life helped you get over a fear of failure?

« Previous Postvermont cheesemakers festival
Next Post » back to school snacks