shrimp and edamame power salad in a jar

The Asian flavors in this shrimp and edamame power salad in a jar are rockin’. You’ll love how well this salad travels for lunches at your desk {or away from home.} The dressing on the bottom won’t make the rest of the salad soggy until you’re ready to enjoy it. 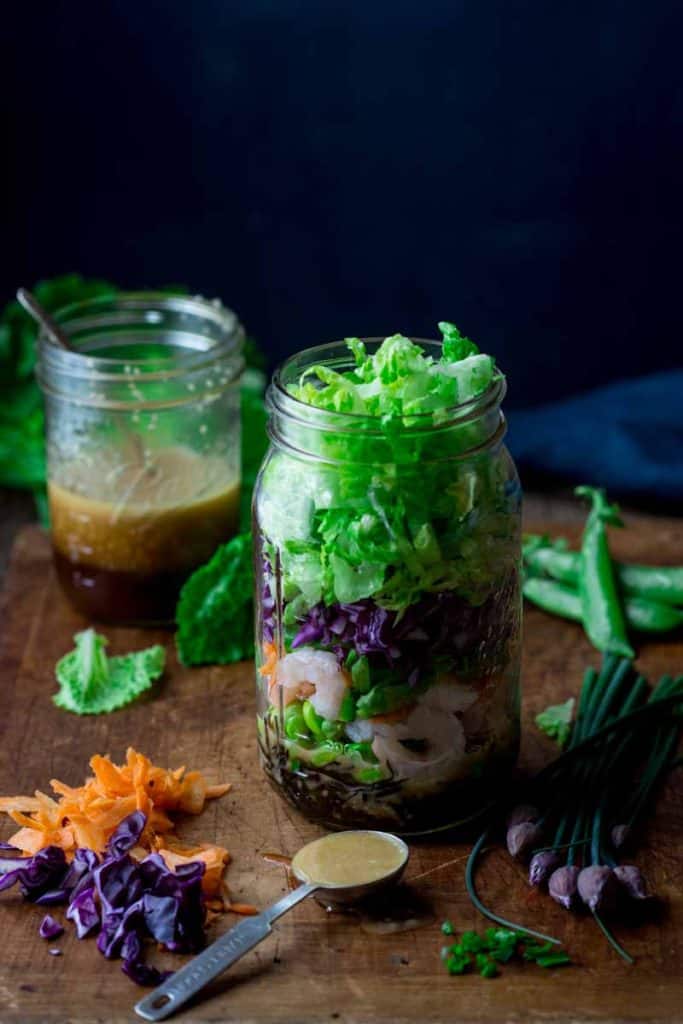 Along with overnight oats, and kale chips, jar salads was one of those healthy food blogger trends that I just didn’t see the appeal of until I tried it. 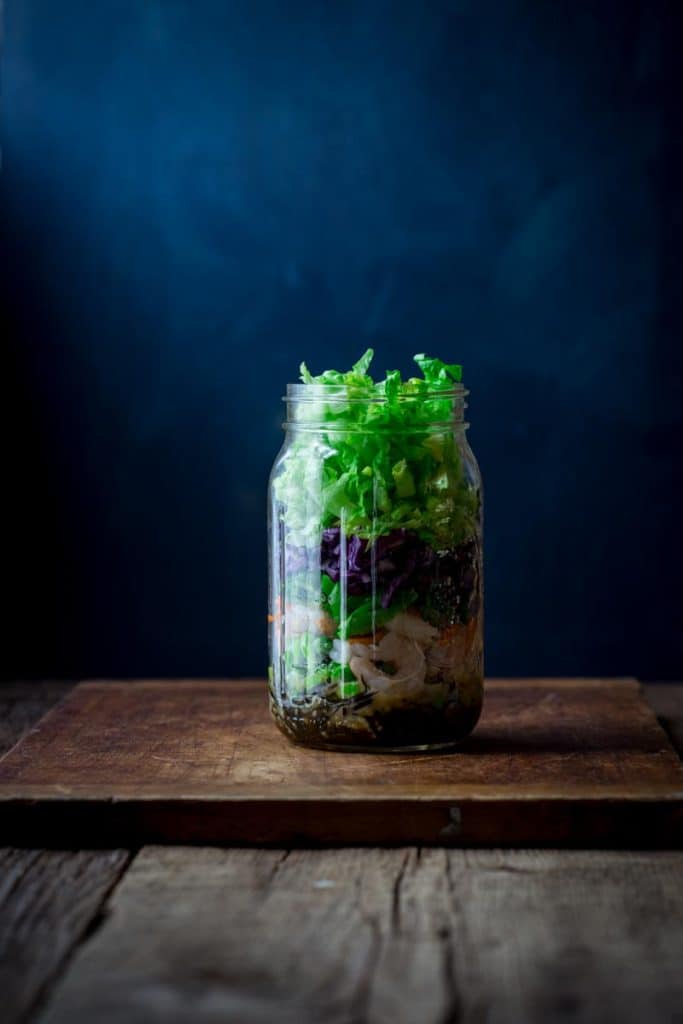 I’m embarrassed to say, I don’t think I actually understood why someone would put a perfectly good salad into a vessel that is hard to eat out of. I was like how does that work? Wouldn’t that be annoying to eat the salad out of a jar? I can just see the whole thing as a messy proposition: lettuce and droplets of dressing a-flyin’ as your trying to jam your fork down into the jar! Is this just me? You know, like when you eat a sausage and pepper sandwich at the fair and the whole thing is about to fall apart so you can’t put it down, so it’s kinda annoying and stressful? And you were hoping that it will be the once a year sausage sandwich indulgent fix that you dreamed it would be? But instead you realize that you only have sausage sandwiches once a year because they are annoying not because they’re bad for you? Do you know what I mean?

Wait what was I talking about? 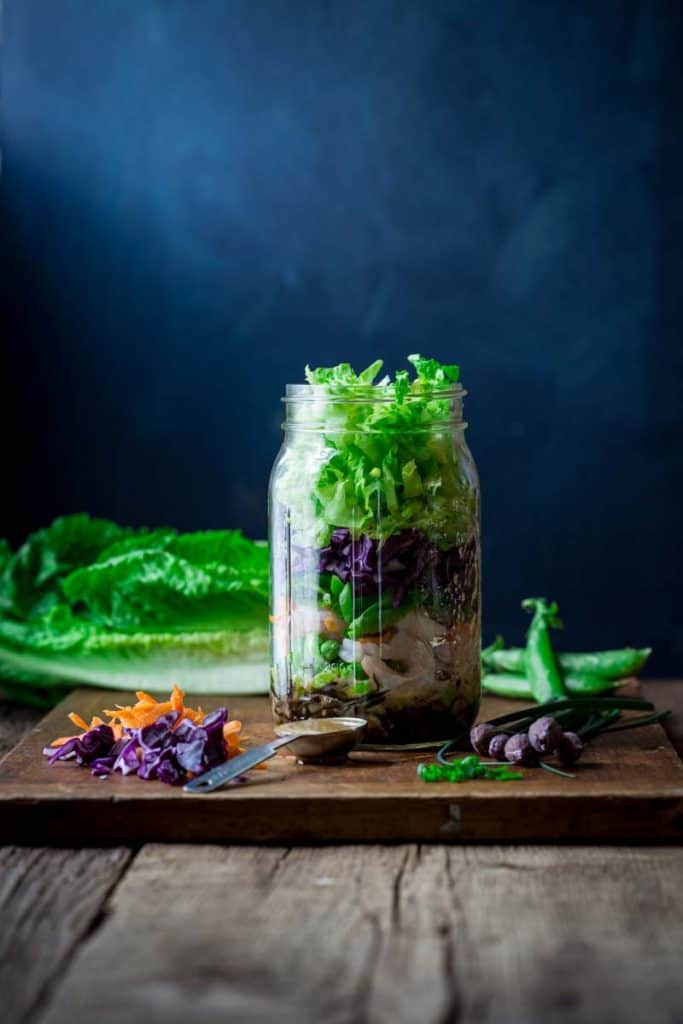 Oh yeah, jar salads. So I was wrong. There is no lettuce flying. No splatters of dressing going all over. Nope.

Now that I am much wiser, I know how awesome jar salads are.

Because, duh, you don’t actually have to eat it out of the jar. The jar is more just for packing the salad up so you can eat it later. The ingredients are layered in (in a specific order) so that the dressing is on the bottom, and doesn’t wilt the salad. No need for a separate jar of dressing in your lunchbox, and no sogged-out salad. 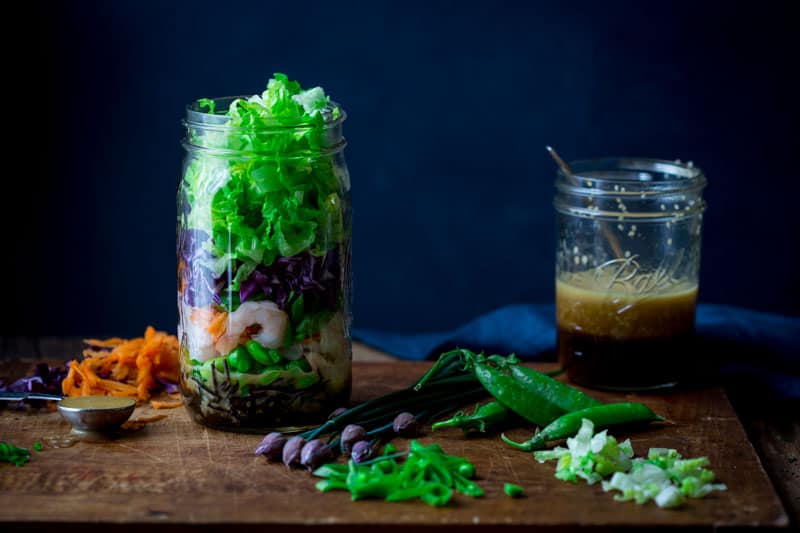 I mean you CAN eat it out of the jar. But I prefer to pack the salad into the jar and take it where I’m going, then flip it over to agitate the dressing on down into the salad stuff (that’s a technical term by the way—salad stuff) and then empty it out onto a plate or bowl to eat it.

Anywhoo, so now that you’re totally on board with jar salads. I have to say that this jar salad is special. Why? Because it is super filling and flavorful! Hence the fact that I am calling it a Power Salad in a Jar.

It has shrimp- yay shrimp in a salad for lunch! Frozen cooked shrimp are so convenient. Just keep a bag in the freezer and thaw what you’re going to use under cool running water for a minute or two. Boom. Done.

And edamame! More fuel to power me (and you, now that I know I’ve convinced you about the whole jar salad thing) through the day. Edamame have protein and fiber which help satisfy for longer.

It also has Arame!! Say whhaaaat now? Arame. It’s a sea vegetable. You know, like totally seaweed. Arame is really mild compared to some sea vegetables, so it’s great for beginners. Find it in the health food store in the Asian section. Keep it in your pantry. When you’re ready to use it, just soak it in cool water for 5 minutes to soften it. In this salad it totally rocks. I love the way it works with the Japanese toasted sesame oil dressing, shrimp and edamame. So good!

This packable salad is full of satisfying shrimp and edamame. The arame is an unexpected and delicious addition.

14 comments on “shrimp and edamame power salad in a jar”